Ashburton vicars
Notes on some of the Ashburton vicars
The 1300s
The Black Death 1346-1353.
https://www.livescience.com/what-was-the-black-death.html - accessed 03-09-2020
'At Ashburton...John de Undele was instituted to the Vicarage in November 1335, and it appears that he held it till the fatal year [1348], when he was succeeded by David Penylis, who died just before Christmas. His Institution is not recorded, owing, no doubt, to the confusion which prevailed; but on the first of January Richard Yuri was instituted, who seems to have fallen immediately, for his successor, Thomas de Botercombe, was instituted only ten days later.'

The 1500s and 1600s
Robert Lawe 1589 - 1629
Robertus Lawe MA, appointed Vicar Aishperton 4/2/1589. Source Devon RO Chanter 21, (Register).
Clergy database, https://theclergydatabase.org.uk/jsp/DisplayAppointment.jsp?CDBAppRedID=107752 - accessed 24-08-2020
In 1877 Alexander Balloch Grosart printed the Executors' accounts of Robert Nowell, from original manuscripts belonging to the Towneley family of Towneley Hall in Lancashire.
Tracing the Towneleys, PDF produced by www.towneleyhallsociety.co.uk, p45
Robert Nowell made various payments to one Robte Lawe whilst at Brasenose College, Oxford, and Grosart added some biographical notes:
'Robert Lawe was a younger son of Robert Lawe of Wiswall, near Whalley, yeoman, by his wife Elizabeth, daughter of John Wolton, yeoman; thus he was nephew of John Wolton, Bishop of Exeter (whom I notice hereafter) and sister's grandson (great nephew) of Dean Nowell.
Robert Lawe appears to have been at home in 1569, but in that year or early in 1570 was sent to Oxford and entered at Brasenose. Our MS shows the frequent pecuniary assistance afforded to this youth by Dean Nowell during eleven years he was the university; and supplies the fact that he proceeded BA in 1579-80. Afterwards he took the MA degree. On leaving the University, about 1582, he became beneficed at Ashwater. Being taken under the patronage of his uncle John Wolton, who had been created Bishop of Exeter in 1579, Robert Lawe, MA., was collated to the archdeaconry of Barnstaple in that diocese the 7th January 1582-3. On the 3rd December 1584, Robert Lawe, Archdeacon of Barum, was collated Treasurer of the see of Exeter (Le Neve, vol.i, pp407, 416). He held the office of Treasurer until his death....
Robert Lawe died before June 1629, when Robert Hall was appointed Treasurer of Exeter, vacant "per mort Lawe" '
Rev. Alexander B Grosart, ed., The Spending of the Money of Robert Nowell, printed for private circulation 1877, p251
In addition to the appointments detailed by the Rev Grosart there are the following:
Vicar at St Newlin (Newlyn East, Cornwall) 6/1/1582 (Devon RO Chanter 20)
Rector at Sancte Columbe Maioris (St Columb Major, Cornwall) 19/6/1584 (Devon RO Chanter 21)
Clergy database, https://theclergydatabase.org.uk/ - accessed 24-08-2020
Robert was buried at Ashburton on 29th June 1629.
Parish records
Probate for his will was granted in July 1629. In it he said, 'I give and bequeath unto my Cosen* Markus Lawe the next Advowson and presentation of and to the church and vicaradge of Ashberton in the countie of Devon and all my estate right and title to the same.'
PCC -TNA PROB 11/156, transalation by Simon Carter, to whom many thanks
*Cosen (cousin) is used here in the sense of relative.

Samuel Tidball 1644 - 1647
Samuel Tedbole was appointed as curate at Ashburton 4/4/1616 (Devon RO Chanter 42)
https://theclergydatabase.org.uk/jsp/DisplayLibClDetail.jsp?CDBLibClDeID=200970 - accessed 29-08-2020
Samuel Tidball, clerk, was instituted as vicar To Aishberton the 11th August 1644 (PRO E331 Exeter/10 Returns to First Fruits Office)
https://theclergydatabase.org.uk/jsp/DisplayAppointment.jsp?CDBAppRedID=171398 -
accessed 29-08-2020
'Mark Law, who married Maria Tidball, December 22nd, 1536, and upon his death, in 1644, was instituted Samuel Tidball, his father-in-law, who came to Ashburton as curate to Robert Law in 1613 and remained there all through the incumbency of his son Mark*; he was also master of the Grammar School, and it was in his time that (in consequence of a law suit, relative to some money, which had been bequeathed to his school), the chancery decree was obtained, under which it has been ever since governed, and which provides, that if after him " Any Master shall take any Ecclesiastical living, Curateship, or constant Lectureship, or neglect his school, or become insufficient from any cause whatever, in the opinion of the Trustees, he shall vacate his place, and the Electors may displace him." He died about two years after his institution to the Vicarage, 23rd September 1647.'
Charles Worthy, Ashburton and Its Neighbourhood, publ. L B Varder, Ashburton 1875, p22
*Worthy may mean son-in-law here (ie Mark was son-in-law to Samuel Tidball. If he means that Mark was the son of Robert Lawe he is incorrect, although they were related - see Robert Lawe, above.
Samuel was buried at Ashburton in September 1647
Parish records
Alexander Grosse 1647 - 1654
'9 December 1647 - Petition of Alexander Grosse, minister. He was appointed, by order of the Standing Committee for the county of Devon, to officiate in the parish church of Ashburton. He prays to be settled in the place by the annexed ordinance.'
Ref HL/PO/JO/10/1/246 National Archives https://discovery.nationalarchives.gov.uk/details/r/f5e0849d-1e0b-42c2-84ba-34c3c5e626a1 - accessed 27-08-2020
'Grose, Alexander, of Christow, Devon: son of William Grose, husbandman. School, Exeter, under Mr Periman, five years. Age 22. Admitted, July 26th 1618, sizar of his surety, Mr Kidman.
B A (Trin. H) 1621-22. Incorporated as M A at Oxford, 1632. B D (Oxf) 1633. For a time preacher at Plympton. Rector of Bridford, Dev., 1639: and vicar of Ashburton, 1652-4. Buried at Ashburton 1654. " A zealous and mighty man in the Presbyterian way" (Wood). For some account of his numerous works see Trans of Dev. Ass xxi 525'
John Venn, compiler, Biographical History of Gonville and Caius College 1349-1897, vol 1 Cambridge, 1897, p240
'Walker tells us, on somewhat doubtful testimony, that Samuel Tidball, vicar of Ashburton, was sequestrated, and died before the Restoration. Whether sequestrated or not, he died in 1647; and was succeeded by Alexander Grosse, an undoubted Puritan. It is not unlikely that the germs of Nonconformity in Ashburton were implanted during his seven years' ministry.'
Rev T G Crippen plus additional writers, Congregationalism in Ashburton, Congregational Historical Society, 1933, pdf, biblicalstudies.org.uk - accessed 27-08-2020
1654 'Alexander Grosse Bachelor in Divinity, on the stone over his grave is expressed [?] that he departed this life the 13th day of April, which is mistaken, he being buried ye 10'
Parish records

Joshua Bowdon / Bowden
In May 1656 Sarah the daughter of Joshua Bowdon vicar of Aishberton, born 6
Jan 1659 Elizabeth ye daughter of Joshua Bowdon, vicar of A. born 20
1661 Joshua sonne of Mr Joshua Bowdon vicar bapt 2 March
Parish records
Josua Bowden was instituted as perpetual vicar at Ashberton 23/1/1661 (Devon RO Chanter 24 Register)
https://theclergydatabase.org.uk/jsp/DisplayAppointment.jsp?CDBAppRedID=309829 - accessed 29-08-2020
He was deprived of the post 24/9/1662 (Devon RO Chanter 24 Register)
https://theclergydatabase.org.uk/jsp/DisplayVacancy.jsp?CDBAppRedID=309933 - accessed 29-08-2020
In 1775 Samuel Palmer wrote The Nonconformist's Memorial, which was 'an Account of the Ministers who were rejected or silenced after the Restoration, Particularly by the Act of Uniformity which took place on Bartholomew-day Aug 24th 1662.'
'The following persons afterwards conformed....Mr Joshua Bowden of Ashburton.'
Samuel Palmer, The Nonconformist's Memorial, vol 1 London, 1775, p441
On 26/9/1664 Joshua Bowden was appointed vicar of Frampton in Dorset (BRO ep/A/10/1/4 Subscription book)
https://theclergydatabase.org.uk/jsp/DisplaySubscription.jsp?CDBSubscrID=44860 - accessed 29-08-2020
The 1700s
John Gilbert 1721 - 1753
'In December 1726 he was preferred to the Deanery of Exeter, and in 1743 was promoted to the Bishopric of Llandaff, and afterwards translated to Sarum. Bishop Gilbert continued Vicar of Ashburton until his elevaton to the Archiepiscopal See of York, in 1753
Charles Worthy, Ashburton and its Neighbourhood, Ashburton 1875, p23
Right: John Gilbert by Thomas Hudson.
In the public domain, available through https://en.wikipedia.org/wiki/John_Gilbert_(archbishop_of_York) - accessed 03-09-2020 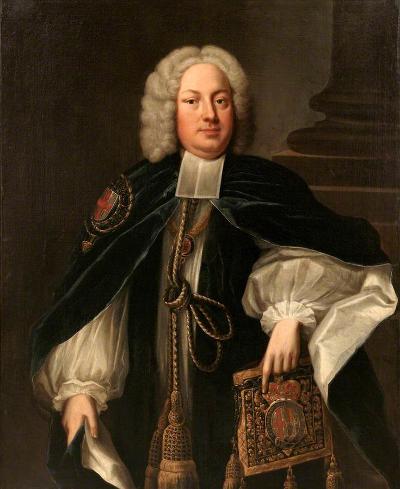 In 1902 there was a 'Painful incident' at the funeral of a young woman*, conducted by the Rev R J Bond. A coroner's jury had brought in a verdict of 'Suicide whilst of unsound mind', and because of this the vicar refused to allow the body inside the church. Shops and houses were closed - as were the church doors -  as the funeral procession passed through the crowded streets, and large numbers of inhabitants accompanied the mourners. The vicar read a special service at the graveside, but the whole funeral took only fourteen minutes.

The general mood of the town was of 'detestation' for the vicar's behaviour.
Western Times 24 January 1902 p6 col2

In 1902 the Medical Officer reported 28 mild cases of scarlatina* in the town. The vicar, the Rev Bond, wrote a letter to the Urban District Council stating that several people from affected houses had come to the Vicarage, and his servants, 'in ignorance', had let them in. Worried for his own children, he asked that a notice be distributed to the households in question, telling them not to go around 'begging and spreading infection.'

No action was taken.
Western Times 8 September 1902 p4 col6
*Scarlatina - another name for scarlet fever, although usually in a milder form
http://www.nhs.uk/ Accessed 30-9-2013 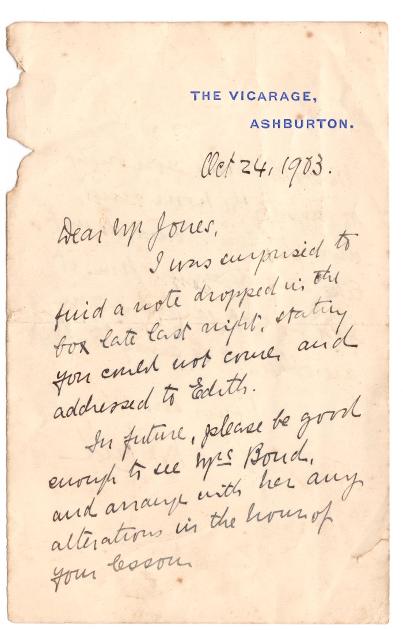 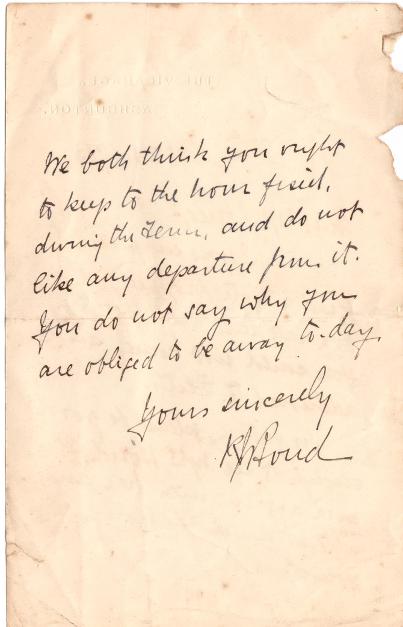 Above: A letter from the Rev Bond to Mr Jones, dated October 1903. It reads: "Dear Mr Jones, I was surprised to find a note dropped in the box late last night, stating you could not come, and addressed to Edith.

In future, please be good enough to see Mrs Bond, and arrange with her any alterations in the hours of your lesson.

We both think you ought to keep to the hour fixed, during the term, and do not like any departures from it. You do not say why you are obliged to be away today.

From other documents, Mr Jones is probably Harold O Jones, who appears on the 1901 census as a 29 year old professional musician.

Edith is the Rev Bond's daughter - she is 8 years old on the same census, so would be about 10 at the time of the letter.

Thanks to Linda Phillips for the document