Carnival
The burning of effigies (and not only of Guy Fawkes) has been associated with November 5th from at least the end of the 18th century in Ashburton.
Richard Carlile, who was born in 1790, says 'Julian [his son] is not near as excitable over his paper cap, embellished on and before the 5th of November, than I was then in scouring the hedges for miles around, from daylight till dark, to gather a faggot wherewith to burn the effigy of "old Tom Paine", my now venerated political father!'

An effigy of the Pope was burned in 1850. 'Urchins' had a holiday from the public school to assist in the proceedings.
Western Times 9 November 1850 p7 col5

Things got a bit out of hand in 1873, resulting in ten (presumably young) men appearing at Ashburton Police Court. At about 11.30pm on the 5th of November Police Sergeant Hobbs saw Henry Mortimore come down East Street with a lighted tar barrel on his head, followed by a crowd with sticks. Mortimore threw the barrel down at the West Street end of the Bull Ring, and people dashed through the archway to Mr Osmond's mill. William Coleman, John Peacock and Richard Cornish put faggots of wood on the barrel, and when more wood was added the flames reached 'as high as the houses'. Witnesses saw Thomas Wotton, Thomas Murch, William Henry Shillabear, Henry Pomeroy and John Parnell poke the fire, although they did not add to it.
Two constables were pelted with potatoes, turnips, apples, burning sticks and squibs, and allegedly rockets were let off.
Mr E Windeatt defended the men, asking how they had been selected from around 200 people at the scene. He also alleged that men wearing black coats, and appearing to be gentlemen, had not been summonsed. However the Bench was unmoved, and said that this behaviour must stop - fires in the street 'were dangerous to property and a terror to the inhabitants'. They must find a field in future, or suffer the consequences.
The defendants were all fined 10s, or 7 days hard labour. Frederick Dumble did not appear in court, and a warrant was issued.
Western Morning News 27 November 1873, p2 col7
For more on the tradition of burning tar barrels, see http://www.tarbarrels.co.uk/history/ - Accessed 27-09-2017

Whether processions were included in Carlile's day and the first half of the 19th century is unclear, but in late Victorian times Ashburton often celebrated November 5th with a carnival.

November 5th fell on a Saturday in 1881, so celebrations were held the following Monday, so as not to interfere with the market. There were two processions, one from the top of North Street, and the second from Bowling Green; some of the participants being on horseback. Whilst 'Guys' predominated in the North St procession, 'gibbeted effigies of some of the Irish agitators' were noticeable in the latter. The processions had banners, and were lit with torches and tar barrels. Later fireworks were discharged - they consisted mainly of hand rockets.

In 1892 'the usual procession' was carried out 'with plenty of spirit'. Amongst the tableaux was 'Colombus discovering America', 'The Death of Nelson' and the 'Death of General Wolfe on Bunker's hill'. Topical local concerns were very popular: 'Ashburton's milk supply', 'Ashburton's prospective local board', 'Villas to let, cottages wanted' and 'The present recreation ground'.
After the procession a bonfire was lit at the Bullring, followed by fireworks.
Western Times 9 November 1892 p3 col2

In 1898 a procession, led by the Hele Band, started from the top of East Street. Tableaux included 'The coronation of the Queen', 'Neptune and his sirens', the Volunteer Fire Brigade and a life-size model of an elephant. 200 torches lit the scene.
Exeter and Plymouth Gazette 11 November 1898 p11 col1

***
Ashburton carnival was revived in November 1912 after a lapse of some years. Amongst the tableau was Mr J Butler's brig, The Saucy Nancy, 'fully rigged and manned with sailors' (see below); a car representing the woollen trade which included two living sheep; the Ashburton Fire Brigade with their manual engine, under Capt. J D Reddaway; a working dairy; a Japanese tea party; Darby and Joan (see below) etc.
Western Times 12 November 1912 p6 col4

The four photographs below, plus the information, are courtesy Sheila Lafleur, to whom many thanks. 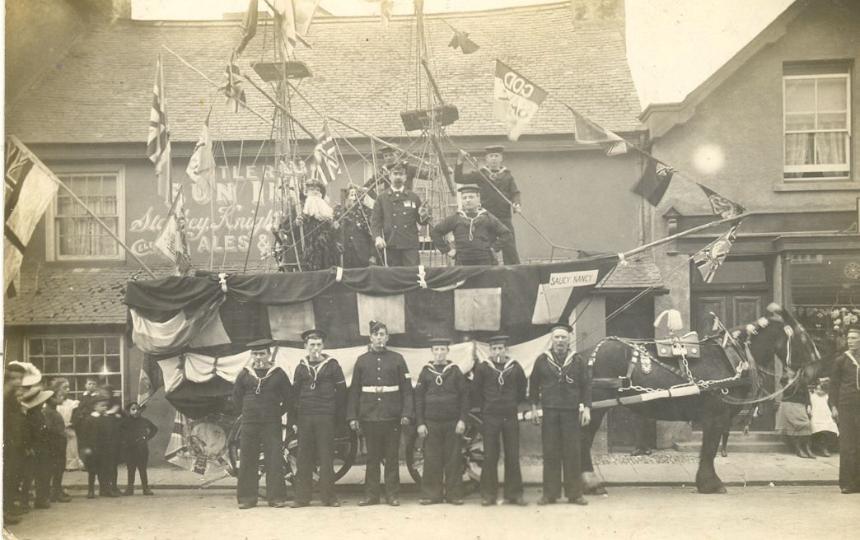 Above: Outside the Sun Inn, North Street. 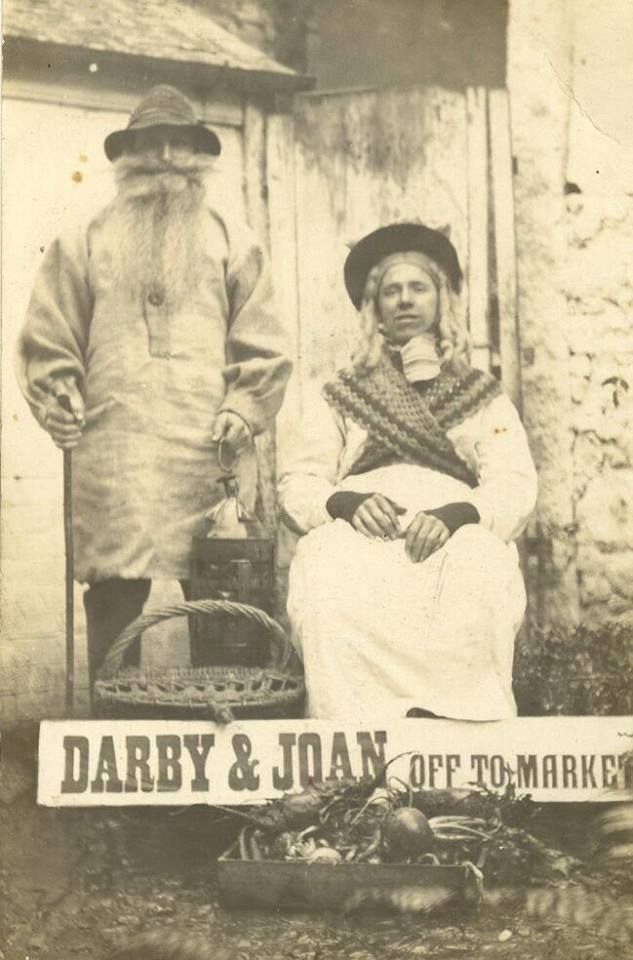 Left: Mr Baskerville and Mr Boons (blacksmith). This is written on the back of the photograph, but the newspaper report says that the pair were Messrs. Baskerville and Tucker.
Jeremy Parker has clarified this:
'I think the writing on the back was probably intended as "Mr Boon's blacksmith".
Horace Boon was my great grandfather, Bill Tucker was my cousin's grandfather.
When Bill first came to Ashburton he was employed by Horace to do any smithing required by the ironmongery (now Church's), and Horace arranged for him to lodge with the Baskervilles.
Bill later lived at Hurst in East Street with his smithy at the back.
Many thanks to Jeremy for this 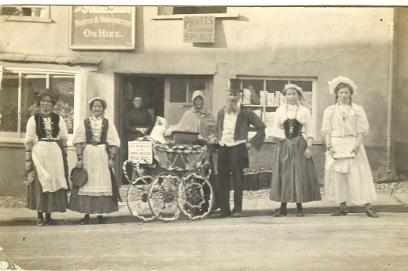 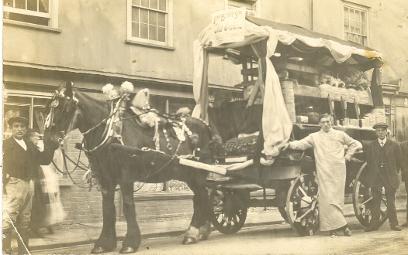 Above: Susan Wills, nee Eales, is standing in the doorway.
Right: Miss Keat and Miss Pearce, who also seem to be in the photograh above.

The proceeds of the carnival were to be donated to the Ashburton and Buckfastleigh Cottage Hospital, and many carnival participants roamed the streets throughout the day with collection boxes. One group, consisting of Mr J Wills and Mr J Hatch, and the Misses Keat, Pearce, Shillabear and Sargeant 'by persistent work added to the funds'.
Western Times 15 November 1912 p14 col2
Many thanks to Frances Berry for this photograph 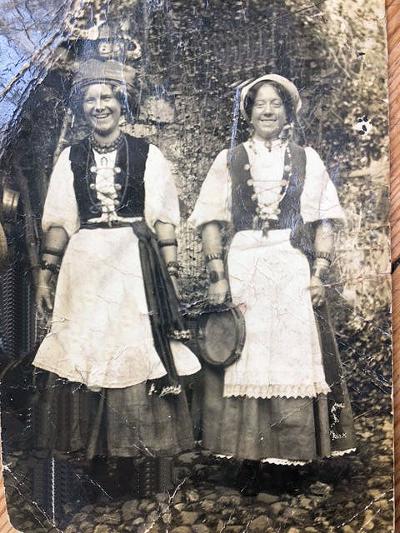 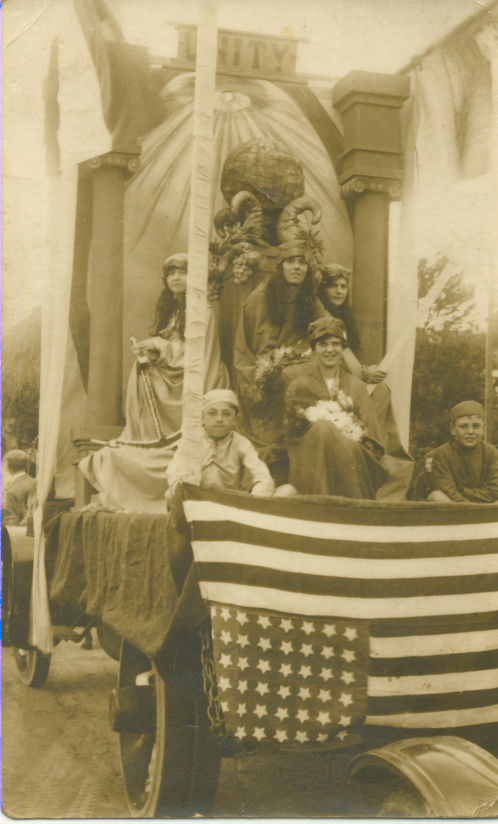 In 1927 the carnival was again revived 'after a lapse of many years.' There were displays of field gun drills and the sailors' hornpipe in the Recreation Ground, where there were various stalls such as hoop-la and coconut shies ; a public tea at the Wilderness, Mr E Tucker's residence; distorting mirrors at the Butter Market; and a dance in the drill hall in the evening. There were a hundred entries in the carnival procession.
Western Times 2 September 1927 p15 col5
Left: Ashburton carnival sometime in the 1920s. 'The girl in the middle at the back on a chair is my aunt Maud Pomeroy (later Avery) with my aunt Lucy Pomeroy to her left. To her right is Violet (surname unknown) and the little boy in white in front is called Boone (first name unknown). Others unknown. Identified by Aunt Lucy'
With many thanks to Lerida Arnold for both the photograph and the information. 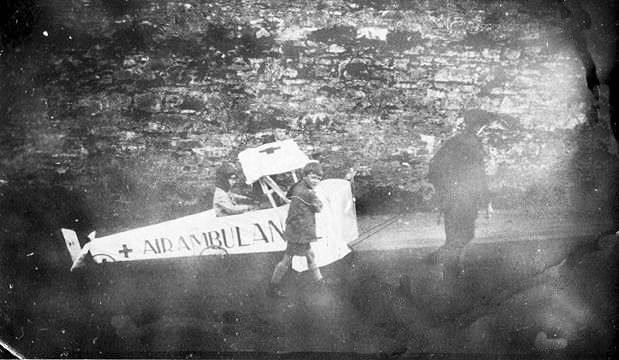 The Rodgman family loved dressing up and taking part in plays and carnival.
Above: The 'Air Ambulance' in the 1928 carnival.
Right: Fred Rodgman dressed as a tramp, standing in front of the aeroplane.
With many thanks to Nancy Frey.
For more on the Rodgman family, see under Individual families 2
***
When Amy Evelyn Brendon married Alan John Kerslake in 1937, the newspaper report said that she had been Ashburton's first carnival queen in 1931.
Western Times 26 February 1937 p14 cols3/4 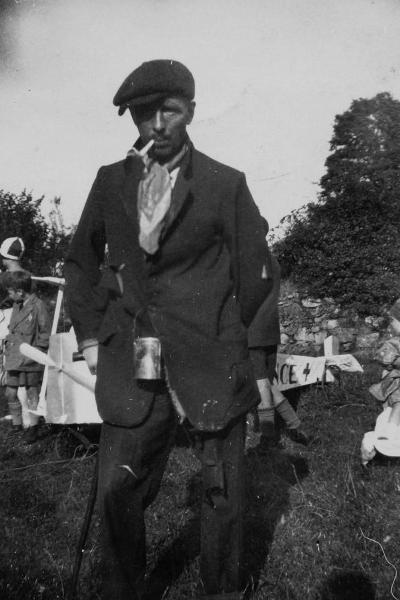 Kathleen Stone was crowned Carnival Queen in 1933 by the Rev E F Ball, the Portreeve. There was a procession, and side shows at the recreation ground. 'Perfect weather prevailed.'
Western Times 1 September 1933, p10 col4 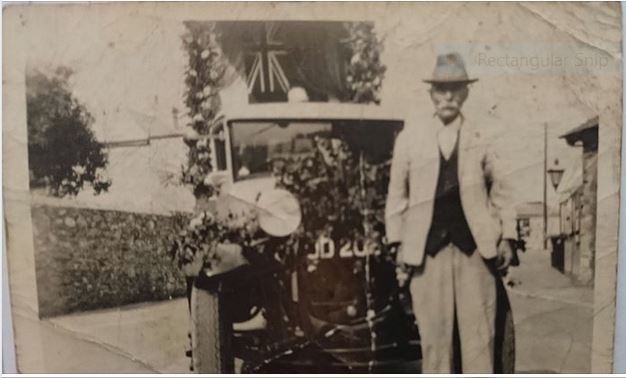 Many thanks to Andre Thorpe for the above image
Left and below: A vehicle decked with greenery, presumably for carnival; date is before 1937. Written on the back of the photograph is Leaman, 5 Station Cotts, Ashburton, Devon.

John Harris Leaman (and at times Mary Elizabeth Leaman) was at Station Cottages between at least 1920 and 1931.
It seems likely that this was the John Harris Leaman (then 26 years old) who married Mary Elizabeth Stancombe in Ashburton in 1884
England and Wales electoral registers 1920-32, available from https://www.findmypast.co.uk
Parish records
In November 1936 the Western Times published an obituary for Mr John Harris Leaman, of 5 Station Cottages, who had died aged 77. As a young man he had joined the Northamptonshire Regiment, fighting in the Boer War and being involved in the battle of Majuba Hill. Although over the age for military service, he volunteered to serve in the First World War and saw service overseas.
Daughters Mesdames Mallett, Hamm, Eggbear and Shaddock, and Jack Leaman R N (son), were the chief mourners at the funeral, together with other family members.
The flag at the Constitutional Club was flown at half-mast.
Western Times 6 November 1936, p7 col2 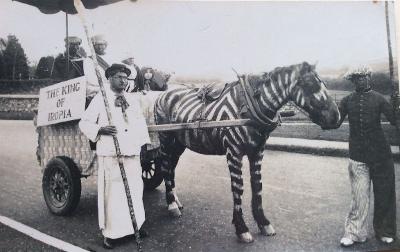 During the 1930s the carnival was very much associated with the Hospital. In 1940 the Ashburton Hospital Carnival decided to cancel the event because of the war, but they resolved to have a house-to-house collection to raise funds for the hospital, the District Nursing Association and the St.John Ambulance.
Express and Echo 21 June 1940 p5 col5

Above: Late 1930s. Charlie Harding is standing; also in the photograph are Glen Arscott, Dick Stanbury, and children Paddy and Pam Harding.
Many thanks to Richard and Frances Berry for this photograph.

Miss E Gill was Carnival Queen in 1938. The Prince and Princess were Paddy Harding and June Horrell.
Exeter and Plymouth Gazette, 29 July 1938, p12 col1
In 1942 Eileen Davey was chosen as Queen. She was from North Street - her attendants were Amy Townshend, who lived in Dolbeare Road, and Margaret Goodwin, from East End Terrace.
Western Morning News 14 August 1942, p2 col6
In 1943 a Furry Dance was held in connection with Red Cross Week. Participants included J Stephens, chairman of the Urban Council, B B Baker, portreeve and Eileen Davey, carnival queen.
Western Morning News 7 July 1943 p4 col3
Right: What appears to be another Furry or Floral Dance - the lady in the middle looking at the camera is Margery Morris. This one was probably late 1940s
Many thanks to Rachel Wood 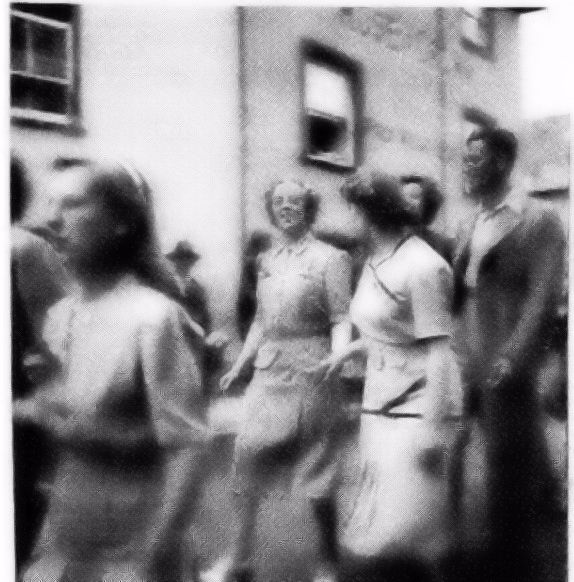 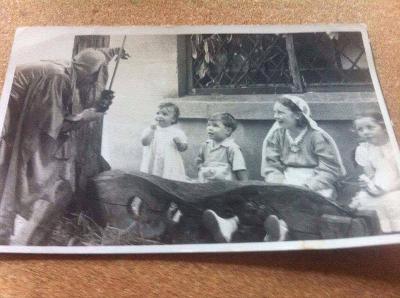 Left: 1952. Stocks in the pannier market behind the Town Hall, presumably during the carnival. The jester was Tommy Guest Snr., and the children were Ann Stone, George Stone, Ann Willis and Jennifer Trude.
Many thanks to George Stone for both the photograph and the information
Right: Michael Webster (Portreeve) and John Brown in the carnival procession, 1970.
My own photograph, 1970 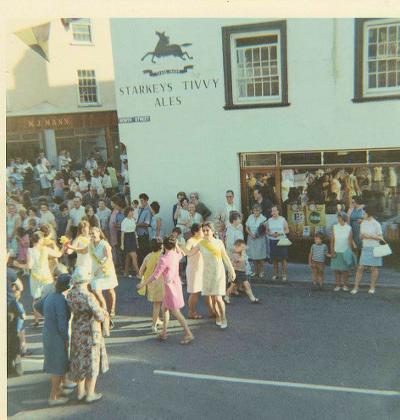 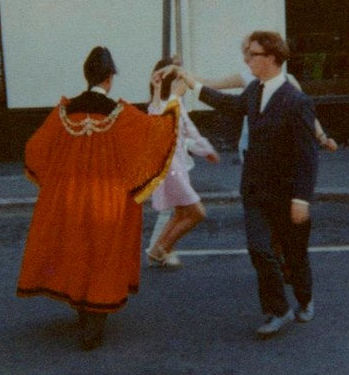 Left and below: More photographs from the 1970 carnival.
My own photographs 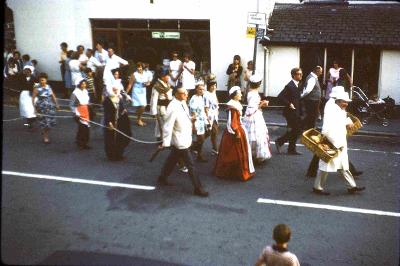 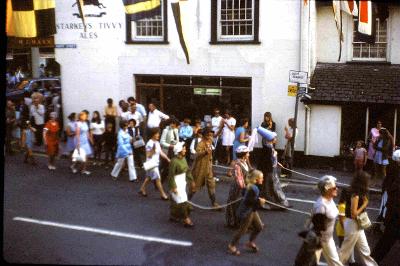 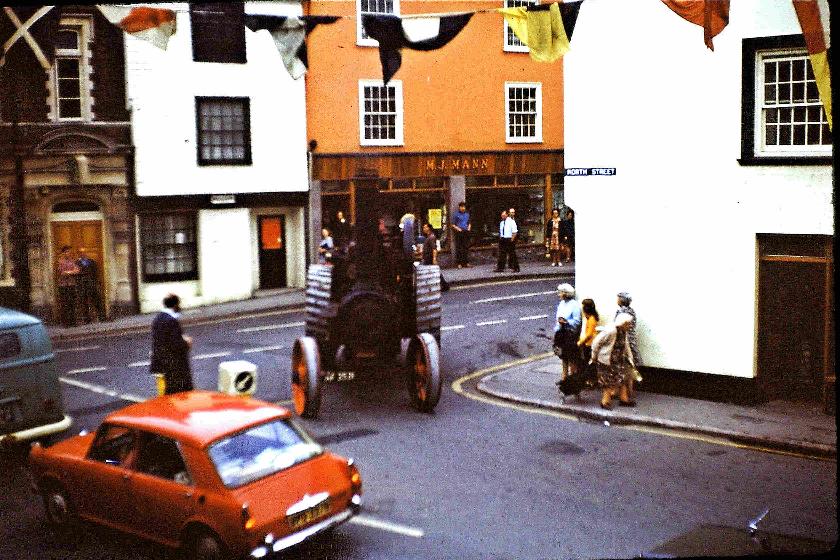