'The Cockey tomb tells us that the Rev. Cocky was curate here for 23 years and had 9 children, of whom

one died in Australia in 1877, one, a midshipman in the Royal Navy died at Cadiz on H.M.S. Achilles

in 1810, and one was drowned when at Trincomalee with the Royal Navy.'

The making of the tombstone survey - on this site. 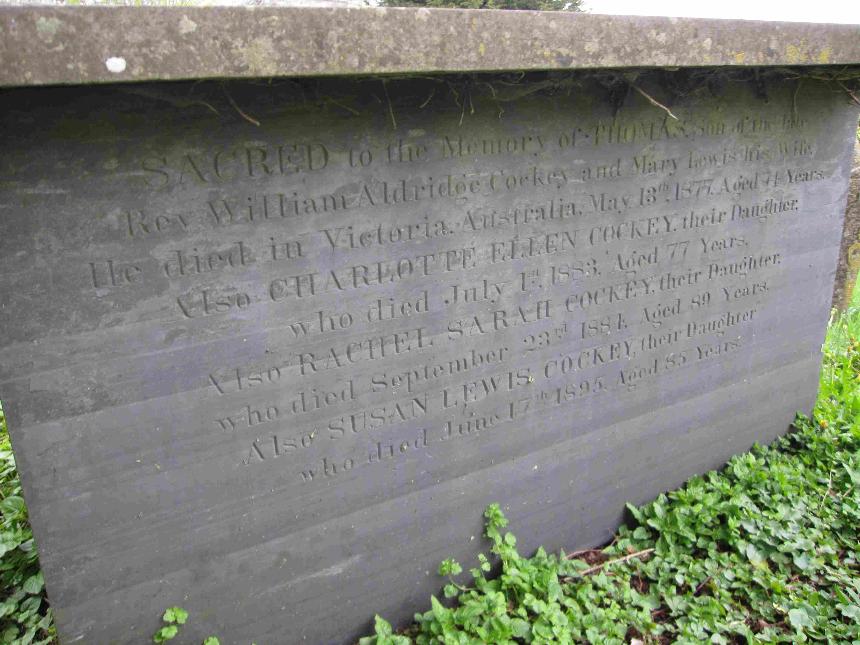 Described as the Clerk of the parish of Rattery, William married Mary Lewis Hodge at Buckfastleigh on the 21st December 1789, and they have a daughter, Mary born in February and baptized in Buckfastleigh in March 1790.
Parish register

January 1804. Mrs Elizabeth Cockey, described as the mother of the Rev. Wm A. Cockey, was buried in Ashburton.
Parish register.

William Aldridge Snr. died on January 18th 1816. By this time he was the rector of the parish of St. Stephen in Exeter.
Exeter Flying Post 25th January 1816 p4 col2 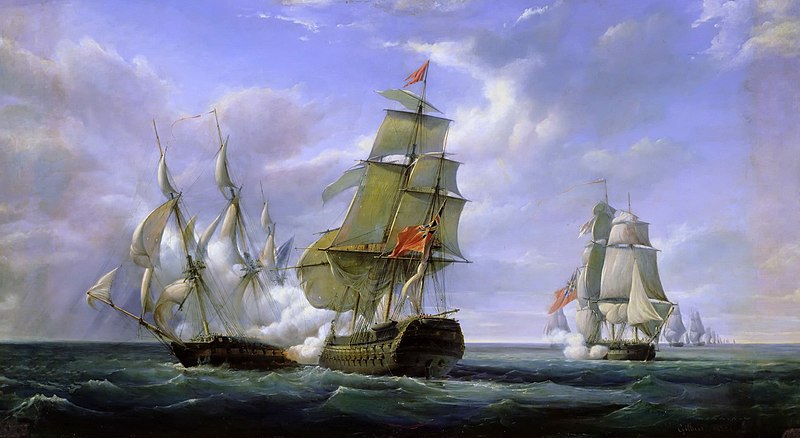 In 1829 Brooking Soady, of Hendon, Middlesex, married Mary Cockey at Ashburton. She was, according to an announcement in the Exeter Flying Post, the eldest daughter of the late Rev. W. A. Cockey.
Exeter Flying Post 1829 p2 col4

'Breach of promise of marriage

One of the cases heard at the Nisi Prius Court of the Devon Lammas Assizes in 1839 was that of Cockey v. Smith. Anna Cockey, the daughter of a clergyman, was living in Ashburton with three unmarried sisters circa 1835/1836, when she was introduced to Mr. John P. Smith, the son of a Devonport solicitor, who was in the area in connection with the management of Lord Clinton's estate. They became engaged in July 1836. By February 1838 one of Anna's sisters, Charlotte, asked Mr. Smith if his affections were still the same, and he assured her that they were. About this time, it was alleged, he 'took advantage of the confidence' of Miss Cockey, and 'obtained that which involved her in ruin'. About ten days later he left the town and from then on visited her infrequently, until eventually he failed to visit her at all, even when he had business in the town.
Miss Cockey was pregnant, although no-one, not even her family, knew this until the day the child was born*. When presented with this fact by Mr. Soady, Anna's brother-in-law, Mr. Smith wrote a letter stating his intention to marry Miss Cockey as soon as she was well. Later, however, he wrote again, claiming that he was overwhelmed by the news of the birth of a child. On reflection, he said that he did not believe they had connected in such a way as to produce a child, and that the baby was not his.
The following March Anna wrote to John, asking him to fulfil his promise to marry her. He did not honour that promise.
The court was packed to hear the case, which went on until 11 o'clock. The jury found for Miss Cockey, and awarded, to cheers, damages of one thousand pounds.
ibid
*The birth of John Smith Cockey was registered in Newton Abbot in the December quarter of 1838. I have found no further reference to him.
http://www.freebmd.org.uk/


John Pridham Smith had become an articled clerk to his father in November 1827 at Devonport.
Ancestry.com. UK, Articles of Clerkship, 1756-1874 [database on-line].
When his father died in June 1849 his will stipulated that the income from various properties 'Shall be paid from time to time to my unfortunate son John Pridham Smith....' for the maintenance (?) and education of his children 'in such proportions as he shall think proper.'
Will of John Smith, solicitor of Devonport, 20 August 1849, National archives ref PROB 11/2098/221

References to a John Pridham Smith in Australia suggest that he may have moved there by 1840.

A William Cockey, brother to Anna, is mentioned in the case. William Aldridge Cockey had become an articled clerk to Robert Abraham in October 1829

In 1852 W. A. Cockey, deputy coroner, is offering himself as a candidate for the post of coroner for the Totnes District.
When he was elected later in the month the bells of St. Andrew's rang out, and the band played throughout the town.
Exeter Flying Post 7 October 1852 p4 col6
Western Times 30 October 1852 p7 col3

In the 1861 census William A. Cockey is living in East Street in the house of his sister Rachel S., together with three other sisters, one of whom is Charlotte E.
William is the coroner in 1861. All the siblings are unmarried.
http://www.freecen.org.uk/

Anna Cockey, father William Aldridge Cockey deceased, married George Heywood on 26th October 1868, at St. Clement's Church, Notting Hill, borough of Kensington and Chelsea (parish register).
In the 1871 census they are living in Fulham - she is 53, and George is 72.