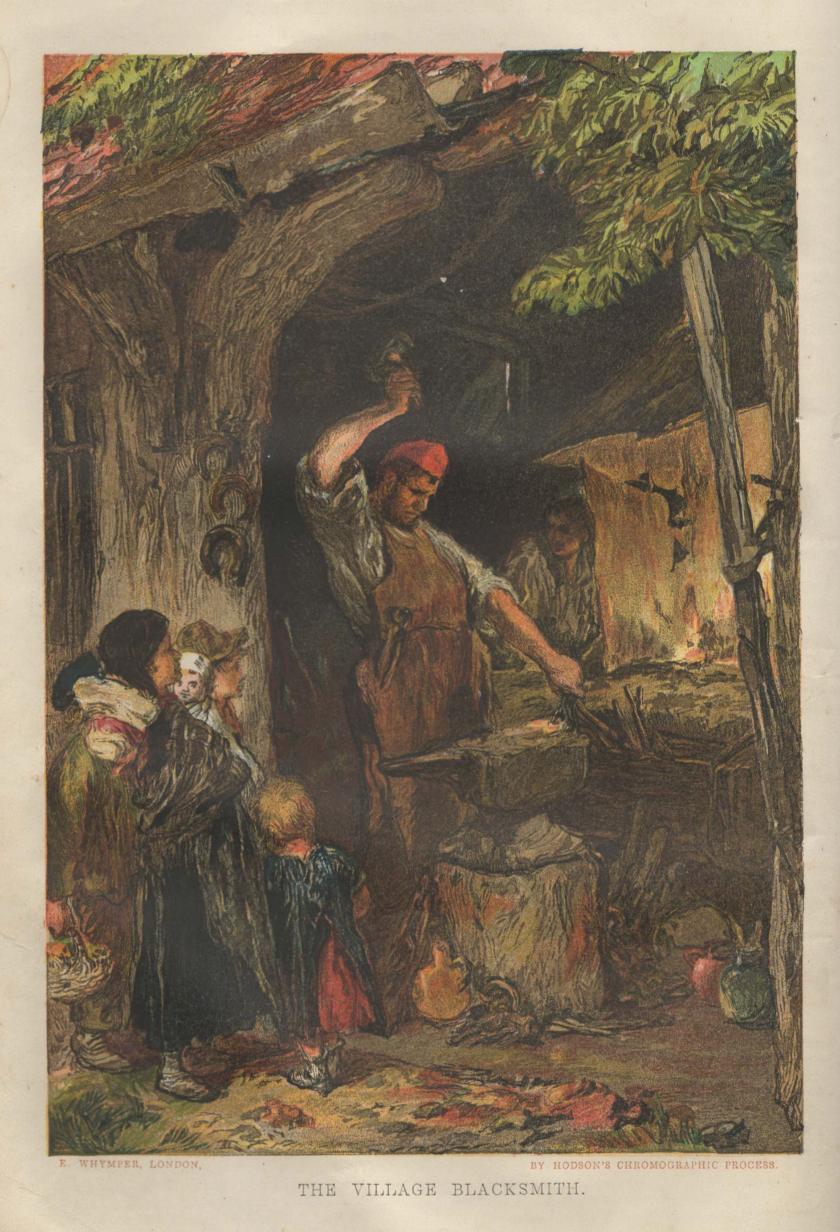 Above: The Village Blacksmith
The Leisure Hour 1864, opposite p11

The Worshipful Company of Blacksmiths was first mentioned in 1299, and in 1571 received a Royal Charter from Elizabeth 1st. Known as a Fraternity until the Reformation, the Company had strong religious links - St Loie is the patron saint.
http://blacksmithscompany.org/

On blacksmiths: '...it is necessary to notice briefly the instruments that he employs. The first article that naturally occurs is the forge, without which his endeavours would be altogether fruitless. The great object in the construction of a forge, is to procure as great a quantity of heat at as small an expence as possible...The next object is to be able to furnish as powerful and steady a blast to the fire as possible...Smith's and Founder's bellows, whether single or double, are wrought by means of a rocker, with a string or chain fastened thereto. One of the boards is fixed so as not to play at all.
By drawing down the handle of the rocker, the moveable board rises, and by means of a weight on the top of the upper board, sinks again. A trough of water is indispensable to the Smith. Wet coals throw out a greater quantity of heat than when quite dry. By it also he cools the tongs when they become too hot - and by dipping the red-hot iron into the water it is thereby hardened.
There are several kinds of heat given by the Smith to iron. The white heat, when it must be forged both into form and size - the blood heat, when it has acquited both, but needs to be smoothed and filed - and the welding heat, when two pieces are to be united. 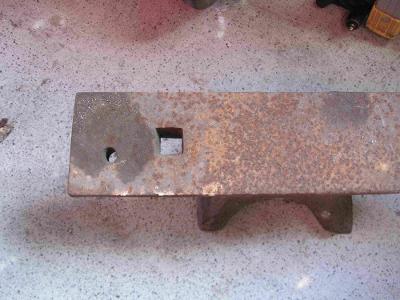 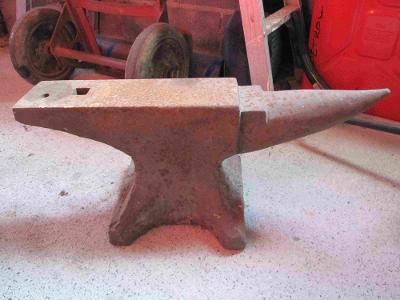 These operations are chiefly performed upon the anvil; the uppermost surface of which is generally made of steel, and very smooth and flat. At one end is a hole for the purpose of cutting red-hot iron, and into which is fixed a steel chisel or spike when necessary.
By means of the vice, which is fixed to the bench, the iron is held fast while he files or works it. Besides those which have been mentioned, he makes use of hammers, files, punches and pineers of various kinds.
A Journeyman Smith can earn from three to five shillings a-day.'
Artificiana, or a Key to the Principal Trades, Edinburgh, 1819,p71ff
Above and above right: Top and side view of an anvil
My own photographs 2016

Right: A handmade nail, that would have been made by a blacksmith. This one was used in an Ashburton property circa 1909.
From my own collection 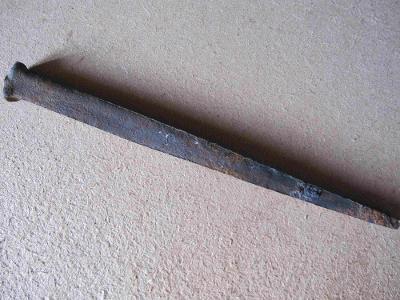 The definition of a white smith is usually given as a worker in tin or other light metals. However, according to Familysearch, whitesmiths worked an alloy of tin, antimony and copper which was introduced in 1769 as a rival to pewter. Originally called white metal, it was renamed Britannia Metal in 1797.
https://familysearch.org/wiki/en/England_Metal_Working_Occupations

1771 John Ferry, who was born in Ashburton, underwent a settlement examination in 1771 (ie questioning to determine which parish he belonged to, in case he needed financial assistance). He lived in the town until he was about 15 or 16, and then went to work as a journeyman smith for 6 months, living with Richard Farley. He married Mary Taylor of Stokeinteignhead, but for the last 18 months had lived in Coombeinteignhead, working as a smith.
http://discovery.nationalarchives.gov.uk South West Heritage Trust, ref 3419 A/PO9/1 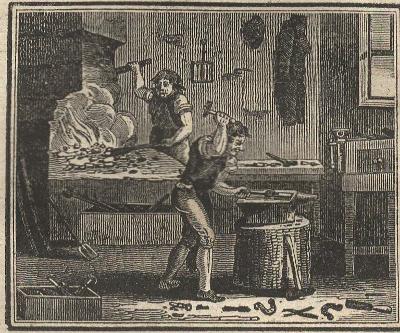 Above: The Smith
Artificiana, or a Key to the Principal Trades, Edinburgh, 1819,p70
Mary Ann, the daughter of John and Elizabeth Hore, abode Ashburton, was baptised in March 1821. John was a blacksmith.
Parish records
John Horton, the 5 year old son of John Horton, whitesmith, died in January 1841
Western Times 23 January 1841 p2 col2

In the 1851 census 40 year old John Horton, a smith, is living in West Street with his wife Ann and their three daughters. All were born in Ashburton.

In 1881 Annie French Horton, the daughter of Henry and Thirza, was baptised in October. Henry was a whitesmith.
3 days later James Thomas Waye was baptised. He was the son of James Waye, a blacksmith, and his wife Jedida.
Parish records 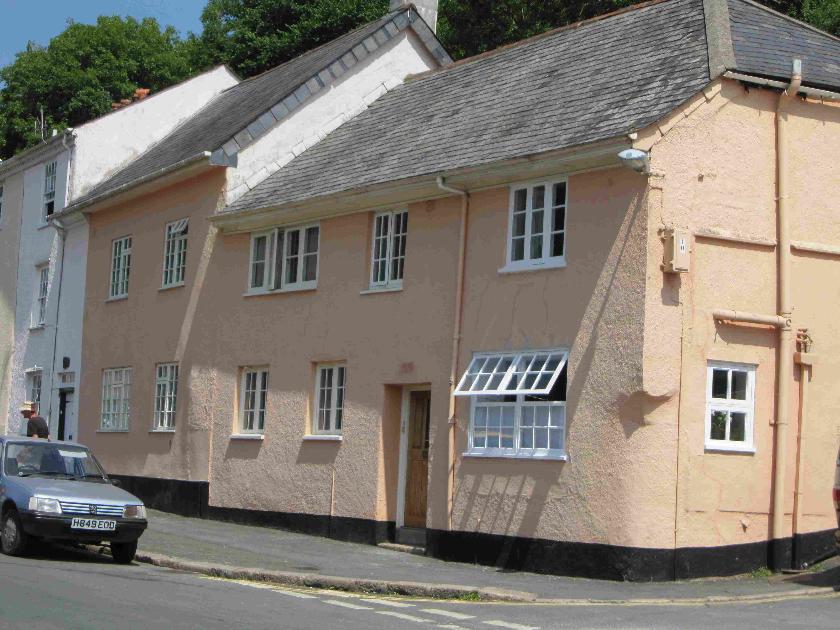 On the 1881 census 39 year old George French, a blacksmith, was living in North Street with his wife and children - amongst them James French, born in 1872.
The family were close to the Culloden Inn, now demolished, which was on the opposite side of the street to what is now No.50.
https://www.familysearch.org/ 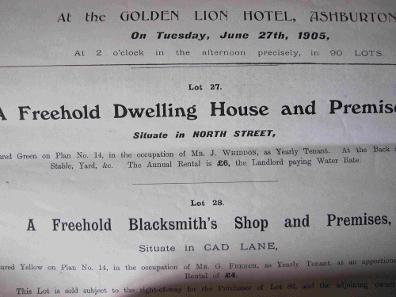 1905 Various properties are sold by auction, including a freehold blacksmith's shop and premises

Many thanks to Jill Harrison for all the information re 50 North Street and surrounding premises. 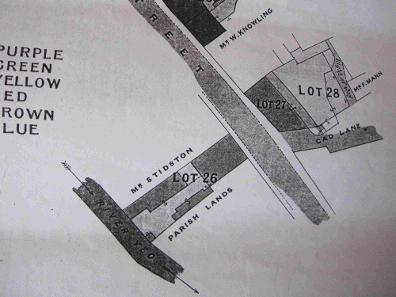 Above and right: Lot 28: A freehold blacksmith's shop and premises, situate in Cad Lane in occupancy of Mr G French, yearly tenant, annual rent of £4 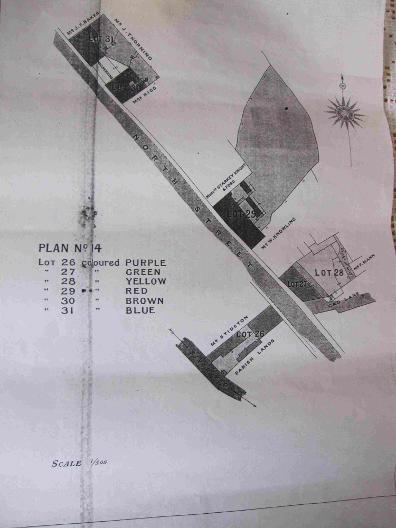 By 1911 James has followed in his father's footsteps, and is a blacksmith in St Lawrence Lane.
http://www.findmypast.co.uk/

In the book 'Horsepower' Bill Tucker, born in 1887, describes his life as a blacksmith in Ashburton. Although not born in the town, he got on with most Ashburton people, describing them all as friendly – all except the other blacksmith - Mr French, of St Lawrence Lane. Even he came round in the end, after Bill knocked on his door and said that he was not trying to take his work away from him. Later, when Mr. French retired, Bill took over the premises.

Other residents mentioned by Bill:

'The blacksmith provided interest for retired and unemployed men. They watched the horses arrive and be tethered; patiently awaiting their turn to be shod. The furnace would blaze and the smithy would extract a red hot shoe and knock it into shape: the sound of the hammer on the anvil resounded in the street. The heat from the fire and the singing of the shoe being immersed in water, the smell as it was placed on the animal's foot, are memories of a craft now the work of a mobile farrier. '
Thanks to Hazel Bray for the above account 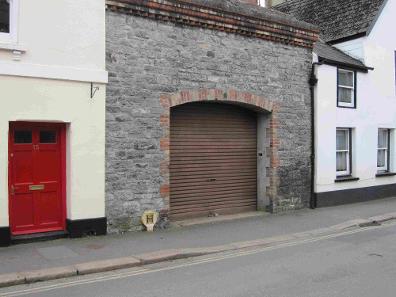 Above: The old blacksmith's forge, St Lawrence Lane
My own photograph circa 2013

1940s and 50s. 'At Great Bridge Mr Hatch had a smithy which was later replaced with a garage by Peter Prowse'
With thanks to Adrian Daw. See his memories in the 1950s section of Growing Up