Water, Gas and Electricity (not to mention sewage)

In consequence of the high price of candles, several inhabitants are lighting their dwellings with gas...
Western Times 21 January 1854  p7 col6

In 1842 the recently reconstructed works were advertised for letting by tender. According to the particulars, a 'moderate' amount of coal produced 'excellent' gas, and the by product of coke could be easily sold. The gas was used to light lamps in the town, which provided an income.

J Caunter chaired a meeting in September 1843, to decide the amount of money to be paid by the parish for Lighting the Town Lamps. Many of the yeoman objected to having any light at all.

In the late 1870s the Gas Works were leased to Mr I Brown, with manager Mr S Starr. There were 36 public lamps, and all the shops were supplied with gas, together with some private properties 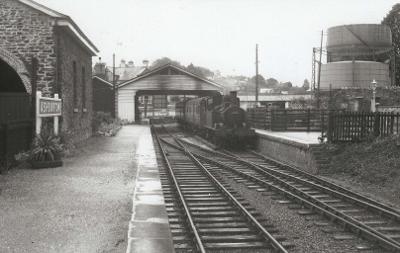 Left: The gasworks can be seen on the right hand side of this photograph
From my own collection
In 1898 Ashburton Urban District Council gave notice that they intended to apply to the Local Government Board to acquire the Ashburton Gas Company
London Gazette Issue 27022 11 November 1898, pp6613,6614

A meeting of shareholders in November 1899 decided to dissolve the company. The company had been incorporated under a Deed of Settlement, 1839

'The coal gas supplied 36 public lamps, including the two large lamps on granite bases at the Bull Ring and at the bottom of St Lawrence Lane. The flames were of the ordinary bats-wing or fish-tail shape and the lamp-lighter made his rounds at dusk with his long pole containing the lighted candle. One movement turned on the gas at the lamp, another lit the gas.'
Prof John Satterly, Ashburton in Late Victorian Days, Transactions of the Devonshire Association, vol 84, Torquay 1952, p23

John Cooke, born at the Rose and Crown in 1765, later moved to Exeter and became a well known eccentric there. (See Inns and hotels). According to Sabine Baring-Gould, he claimed his grandfather brought water into the town to the East Street conduit.
Devonshire Characters and Strange Events, S Baring-Gould, London 1908 p478ff

In 1793 Sir Lawrence Palk and Sir Robert Mackreth, Members of Parliament for Ashburton, had an aqueduct built in the town. This plaque, hard to read and in Latin, commemorates its construction.

Above: Plaque in a garden off West Street.

Many thanks to the owners (who wish to remain anonymous) for permission to photograph this item. 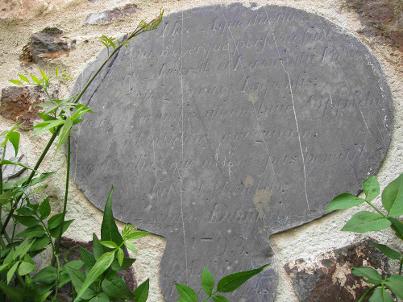 From Richard Bellamy: 'There was a water culvert, with the source being up in the field behind Sparnham House, with a tunnel length of 60 plus metres. My dad took me and my two eldest sons up the length of the tunnel circa 1981/82. We used to have a picture of the entrance at the bottom end, but I do recall it as being a tunnel maybe 4 feet high, with a water channel along its length. I am sure that when we got to the top end we were able to stand upright in a chamber, and could see the timbers of a 'cap' in the roof, with cracks of daylight showing through it! My dad had horses in the field, but he didn't seem too worried about the cap giving way and them falling through.'
Many thanks to Richard for this recollection

1854 John Sparke Amery, 'always interested in any public good', offered residents the use of spring water from any of his fields. Water was, said the Western Times, 'now so much wanted'.

In May 1855 there was a proposal for a sewer in East Street. Many people believed that a sewer was unnecessary, and thought a good supply of water was more of a priority.

Later that year there was a shortage of water in the East Street Conduit, resulting in its being turned off at night. Shares had been issued in a company proposing to the improve the water supply, but nothing had come of it.
Western Times 12 May 1855 p7 col1
Western Times 25 August 1855 p7 col5

In 1856 the Western Times was able to report that sewers were about to be installed in East Street and North Street. The paper suggested that the next improvement must be to have a better water supply.
Western Times 12 July  1856 p7 col3

In 1869 the same newspaper was able to report that in spite of extraordinary weather conditions the streets of Ashburton had no surplus water, thanks to the complete sewer system.
Western Times 5 February 1869, p8 col3

'The effect of the sewage of Ashburton, Devon, as described by H Caunter Esq. - "As an illustration of the extraordinary effects of sewage water, even in a highly diluted state, I will mention the beautiful valley in Devonshire immediately below the little town of Ashburton. The stream of water which runs through the place receives all its sewage and the wash of two or three manufacturies, and is afterwards by a well arranged system made to irrigate the valley below for nearly three miles in extent, until it falls into the river Dart. The produce of this valley is perfectly astounding, and no stranger can ever pass along the high road from Ashburton to Buckfastleigh without being at once struck with the luxuriance and abundance of the pasture around him. The average rental is about £6 per acre." '*
Climate of England, George Shepherd, London, 1861, p44

When Pridhamsleigh, a dairy and stock farm, was up for let in 1919, it was advertised as having meadows of 'the highest quality, being watered with the sewage of Ashburton...'
Western Times 23 May 1919, p5 col4

* 'Even in the 1950s tomatoes grew beautifully along by the railway tracks.' Ashburton resident. 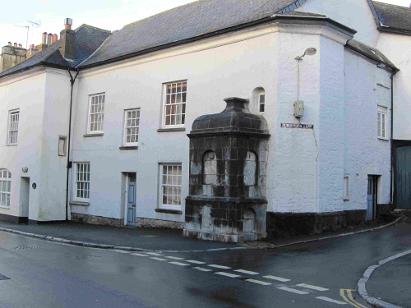 In the dry summer of 1870 'Jardine's Water Works' proved invaluable, but the Western Times complained of waste. The newspaper said that Mr Jardine had certainly never intended that the water be used for activities such as watering gardens, or used in industries such as brewing, or the Gas Works.
Western Times 30 September 1870 p8 col3

John Satterly, born in 1879, said that "every boy deemed it his duty to hurl a stone at the door..."
Memories of Ashburton in Late Victorian Days, John Satterly, Report and Transactions of the Devonshire Association, vol 84, Torquay 1952, p23
Right: Door to a water cistern, Roborough Lane.
My own photograph 2013 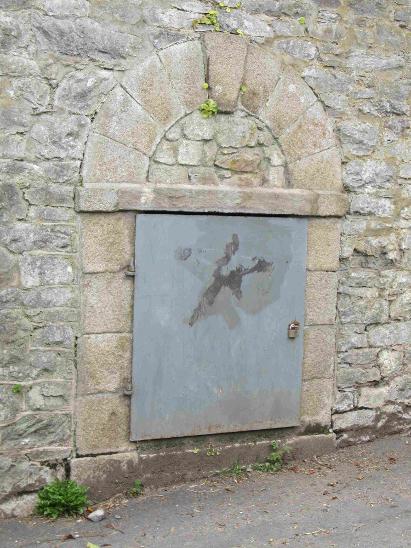 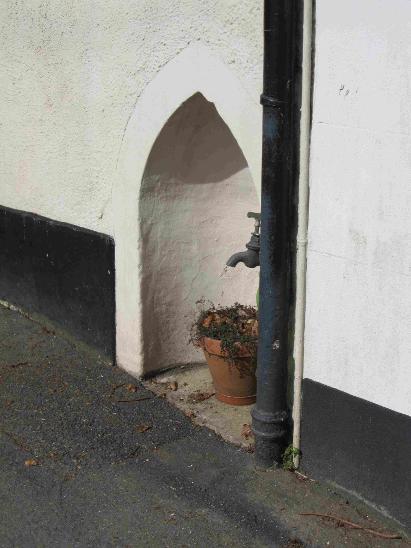 A meeting of ratepayers in January 1884 considered proposals for a new water supply. The current supply was from two or three sources, the main one being the one built by Mr Jardine, which primarily supplied conduits and public taps in the lower part of the town. The water, conveyed in cast iron pipes, was of low pressure, and unsuitable for fire hydrants or for the upper floors of buildings.
Various schemes were submitted to improve the situation, including one using a source near New House to bring water in 6" stoneware pipes via Dry Bridge to Halsanger and Green Lane, Rushlade Farm. A 400,000 gallon reservoir was to collect the water at this point, 312 feet above the Bull Ring - enough for 6 days' supply. 4" cast iron pipes were to bring the water into the town, with hydrants at regular intervals. Branches from these pipes would take water into houses, for 'domestic and water closet uses on the highest floor of any house in the town.'
Western Times 29 January 1884, p5 col6
Above: Tap towards the top of West Street
My own photograph 2013
Questions were raised about the Newhouse scheme, particularly in regard to the cost. The flow of different springs was gauged, and the water quality assessed. At a meeting of the Rural Sanitary Authority in connection with the Newton Abbot Union it was finally decided to adopt the Newhouse scheme, using the plans of Mr Ellis. The resolution was to be passed to the Local Government Board, together with a request for the authority to borrow £3000 for the work.
East and South Devon Advertiser, 23 August 1884, p8 col5
Ashburton streets were being excavated in August 1886, to lay pipes for the new water supply. 'Rapid progress' was being made.
The following February Dr James Adams, of Alexandra House, wrote enthusiastically to the Totnes Times about the new supply 'from Bowdley', which he had had for over a month. He praised its quality, and spoke of its usefulness for new forthcoming projects: the cottage hospital, which was about to be built, and the plan by Lieutenant Tucker for a modern fire engine and hose.
Totnes Weekly Times 28 August 1886, p5 col2
Totnes Weekly Times 26 February 1887, p8 col5
Electricity
1925 A letter had been received by Ashburton Urban District Council from Messrs Carter and Fisher saying that their client was still waiting for the Electricity Commissioners' decision regarding the Ashburton electricity scheme.
Exeter and Plymouth Gazette, 6 June 1925, p5 col3
1938 There was unanimous condemnation by the Urban District Council on the charging structure for electricity imposed by Torquay Corporation. When the price in Ashburton was a penny per unit, it was a halfpenny in Torquay and Newton Abbot.
Exeter and Plymouth Gazette, 12 August 1938, p11 col1
*******