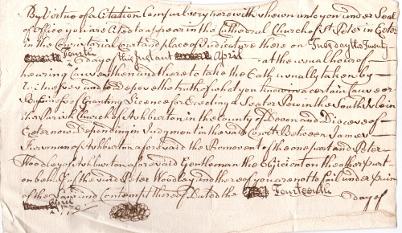 This item is repeated on the St Andrew's church page in the Churches and Memorials section, where there are more details and documents connected to the case.

This is a subpoena to Thomas Hamlyn, carpenter, to appear in Exeter as a witness to a dispute that I have called The Pew War. Two men, John Edmonds and James Fursman wanted to build a pew or pews in the south aisle of St Andrew's Parish church.

Peter Woodley, of Halsanger Manor, claimed that he had sole use of the pews (and the burial rights) in the said aisle.

'By virtue of a citation compulsory herewith shown unto you under seal of office you are cited to appear in the Cathedral Church of St Peter in Exeter in the consistorial court and place of indicature there on Tuesday the twentyfourth day of this .....April at the usual hour of hearing cause....on and there to take the oath usually taken by witnesses and to depose (?) the truth of what you know............

Dated the fourteenth day of April 1770