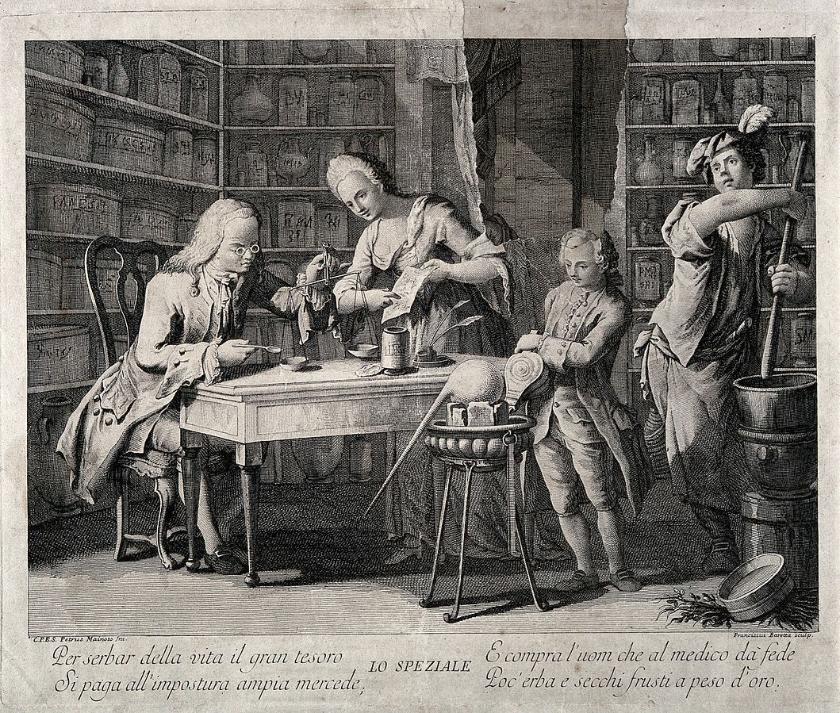 Above: An apothecary making up a prescription using scales, his wife holds a recipe for him and two assistants are working  with the bellows and pestle and mortar.
Line engraving by F. Baretta after P. Mainoto. With thanks to the Wellcome Trust, via Wikimedia Commons

In medieval times apothecaries sold wine, herbs and spices - in London they were members of the Grocers' livery company. By the 1500s they were mainly preparing and selling substances for medicinal purposes, and in 1617 separated from the grocers' company. A legal case in 1704 ruled that they could prescribe and dispense medicines.
http://www.apothecaries.org/society/our-history - Accessed 8-08-2016

Pharmacists (and later, chemists and druggists) prepared and dispensed medicines. Although much of their work overlapped, the emphasis (as I understand it) was that the apothecaries prescribed medicines, and the pharmacists prepared them.
http://www.rpharms.com - Accessed 8-08-2016

In 1764 Moses Tozer, apothecary, provided a certificate to the Michaelmas Quarter Sessions stating that Peter Fabyan of Ashburton was suffering from a paralytic disorder and was unable to serve as a juryman.
Ref QS/4/1764/Michaelmas/NO/7 Devon Heritage Centre https://devon-cat.swheritage.org.uk/records/QS/4/1764/Michaelmas/NO/7
1793 Surgeons and apothecaries, Ashburton: Mr Tripe, Mr Jervis, Mr Moggridge
The Medical Register has sections for the separate disciplines, but some entries, as for Ashburton, combine the two.
The Medical Register for the year 1793, London, p61

December 1802 Proceedings in Parliament - Commons. A petition from the chemists of Ashburton against the Medicine Act was presented.
Cobbett's Political Register, vol2, London, July-December 1802, p850
An earlier Act had imposed stamp duty on all patented medicines and some unpatented ones. In addtion, some vendors had to take out a licence. Later Acts, including that of 1802, taxed more medicines.
Alan Mackintosh, The Patent Medicines Industry in Georgian England, Leeds, 2018, p50

1815 '...The Society, or any of the Assistants thereof, consisting of two persons at least, shall, at all seasonable and convenient times, in the day time, enter into any shop of any apothecary in England or Wales, to search if any medicines etc. be wholesome, and to burn or destroy all such as shall be found unwholesome and to report the names of such persons to the Society...
...impose a penalty on Apothecaries wilfully refusing to prepare or sell any medicines, or negligently mixing any medicinable compositions as directed by any prescription of any physician, signed with his initials...'
Abstract of the New Apothecaries Act, commencing August 1st 1815, London, 1815, p4ff

'Persons who have obtained certificates of their fitness and qualification to practise as apothecaries and to act as assistants, from August 1st 1816 to July 31st 1817.
Kendall, W. Ashburton, Devonsh.'
The London Medical Repository, George Man Burrows and Anthony Todd Thomson, vol 8, July-December, 1817, London, p538

A dwelling house with shop and fixtures was to let in 1833. Close to the market, it had been used as a druggist's for 30 years. Mr R Snow, of 13 Market Street, Devonport, was the proprietor.
Exeter and Plymouth Gazette 7 September 1833 p1 col3

1837 R W Rexford warned purchasers of Devonshire Sauce to make sure that the article was the genuine Rexford article: they had to check that the cork was sealed with the impression Rexford, chemist, Ashburton, and that the label had his signature.
Western Courier, West of England Conservative, Plymouth and Devonport Advertiser, 22 March 1837, p1 col3

Maunder, druggist, Ashburton, was one of those who retailed Harvey's Bark Pills with Sarsaparilla in 1838. The pills were for headache, indigestion, loss of appetite, langour, nervous depression of the spirits, etc. They were also beneficial for eruptions of the skin.
Western Times 22 December 1838, p1 col6
1843 Mr T T Herron, chemist of Ashburton, married Mary Turner at Eldad Chapel, Plymouth.
Exeter and Plymouth Gazette, 23 September 1843, p3 col2

When Mrs Gillard, relict of the late Sylvanus Gillard, died in 1850 she was said to be the mother of Mr T Gillard, chemist and druggist of Ashburton.
Western Times 9 March 1850, p5 col2

Frederick Herron was a chemist and druggist in West Street in the 1851 census. 33 years old, he had been born in Devonport.
20 year old William Gribble was a druggist apprentice in the same household
1851 census HO10, piece no. 1871, folio 267, p 16
In 1852 G W Yolland, an Ashburton chemist, married Miss Maria Hext at Landscove church.
Western Courier, West of England Conservative, Plymouth and Devonport Advertiser, 10 November 1852, p5 col6

The Apothecaries' Company requires candidates for the licence to have been apprenticed to one of their licentiates for five years if in England, though in certain cases this rule is not rigidly enforced...'
The Lancet, ed Thomas Wakley, London, 1857, May 16th

1862 John Charles Hurst, a chemist from Ashburton, gave evidence at the inquest into the death of W[illiam] Foot. Daniel Skews, an Ashburton rifle volunteer, had allegedly fired a blank cartridge at close range. Mr Hurst stated that about a minute before the incident he had told Skews off for firing his rifle close to the ear of a Mr Coneybeare.
Western Daily Mercury, 14 November 1862, p4 col4

In 1879 Abraham Hill, chemist, was brought before the Petty Sessions on a charge of selling adulterated violet powder. The case was dismissed.
Violet powder was a product made from cornstarch or potato flour, perfumed with a violet scent and used on babies. A year previously a baby had died, and when the powder was analysed it was found to contain a large quantity of arsenic.
Western Times 28 March 1879, p8 col4
The Arsenic Century, James C Whorton, Oxford University Press, 2010

In 1881 thirty six year old John L Varder was a chemist and druggist in West Street. He had been born in Bridgewater, Somerset.
1881 census RG11, piece no. 2161, folio 67, p10
The funeral of George Beck, chemist, took place in 1891. An old-established tradesman of the town, he was described as being of a 'very jovial temperament'. He had been Secretary of the Loyal Ashburton Lodge of Oddfellows, and many Oddfellows attended the funeral, wearing white-edged black sashes with a sprig of thyme.
Western Times 8 December 1891 p2 col5

Daniel Ogilvie Evans
Most of the information about Daniel comes from the research of Chris Kahaya, to whom many thanks. I have added to it where I could.
Daniel Ogilvie Evans' birth was registered in Basford in the September quarter of 1841.
https://www.freebmd.org.uk

He was with his father, a widower, in the 1851 census for Burnley, Lancashire, together with 5 siblings, the youngest only a month old.
Another sibling, Joseph James Evans, was born in Newfoundland.
Daniel's father was an independent minister.
1851 census HO107, piece no. 2251, folio 265, p13
By 1911 this brother, Joseph James Ogilvie Evans, was a dispensing chemist and dentist in Teignmouth.
1911 census RG14, piece no. 12693
Daniel registered as a dentist on November 5th 1878.
UK Dentists Registers 1915, available through https://www.ancestry.co.uk
Records such as the 1881 census for Farnworth in Lancashire state that he was born in Heanor, Derbyshire. By this time Daniel, a dentist, chemist and druggist, was married to 24 year old Annie M, and they had a six month old son, Kenneth H Evans.
Daniel Ogilvie Evans had married Annie Maria Williamson in the Kensington district in the March quarter of 1879.
Kenneth Horsefall Evans' birth had been registered in Bolton in the December quarter of 1880. His mother's maiden surname was Williamson.
1881 census RG11, piece no 3814, folio 45, p5
https://www.freebmd.org.uk
https://www.gro.gov.uk 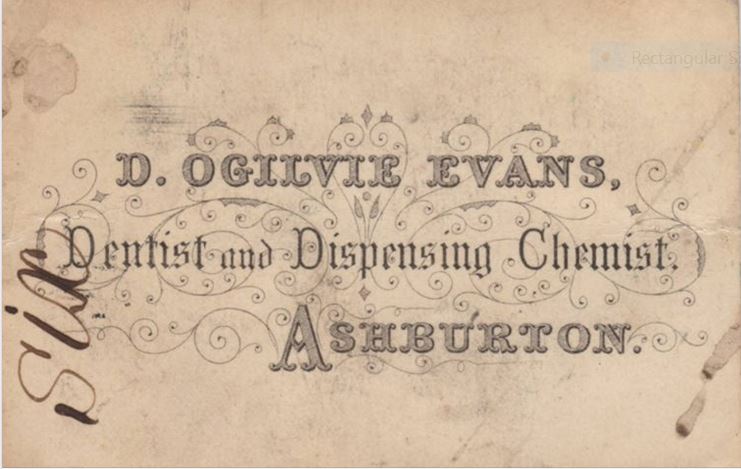 Above: A business card for D Ogilvie Evans. For some time the back of it was used to display one of the hymn numbers at the Methodist Church - the No. 6.
Many thanks to Chris Kahaya for the photograph and information
There was a tea for the children of the Poundsgate Wesleyan Sunday School on the anniversary in July 1886. After the evening service the sight of a large fire balloon should have provided entertainment, but unfortunately a strong breeze prevented it from being fully inflated, and it became torn in several places.
The balloon had been lent by Mr Evans, chemist, Ashburton.
Totnes Weekly Times 17 July 1886, p6 col2
Mr D Olgivie Evans, dentist, gave a lecture on 'Teeth' to the Mutual Improvement Association in March 1887. He illustrated his talk with drawings and specimens.
Totnes Weekly Times 12 March 1887, p5 col4
By 1891 the family were in West Street, Ashburton, in a building in the row of properties between the Duke's Head and the London Inn*.
Their son, Wilfred Joseph Ogilvie Evans, was with Daniel and Annie on the census.
Wilfred's birth was registered in the December quarter of 1887, in the Newton Abbot registration district.
1891 census RG12, piece no. 1698, folio 54, p16
*Probably what is now No.7, as this is where they were in 1911. See below.
https://www.gro.gov.uk

In the 1911 census Daniel Ogilvie Evans, his wife Annie and son Wilfred were living in West Street at no. 7 where they ran the family business of druggist and dentist: they also sold wines and spirits. In addition, Wilfred dealt in photography.

Daniel died on the 16th May 1919, leaving an estate valued at £1065 18s 9d gross. Probate was granted to his widow, Annie Maria Evans.
The Pharmaceutical Journal and Pharmacist, Vol 103, 1919, p176
The Exeter and Plymouth Gazette noted that he 'was one of the most respected tradesmen in the town', who had been in business in West Street for nearly 30 years. His health had been failing ever since the death of one of his sons* two years before.
*Wilfred. See Photographers, under Banks and Businesses 2
Exeter and Plymouth Gazette, 19 May 1919, p3 col6
Many thanks to Chris Kahaya for the above research.
***
John Woolcock Martin is listed as a pharmaceutical chemist and druggist, and a mineral water manufacturer, in East Street in 1902
Kelly's Directory of Devon 1902, p32

1923 The Plymouth and District's Pharmacists' Assocation were having their annual excursion by charabanc in July. The itinerary included Two Bridges, Dartmeet, Widdecombe in the Moor and Ashburton, returning via Ivybridge. High tea was at the Golden Lion Hotel, Ashburton, where the party were to meet up with a contingent from Exeter.
Pharmaceutical Journal, vol 55, J Churchill, London, 1923, p20 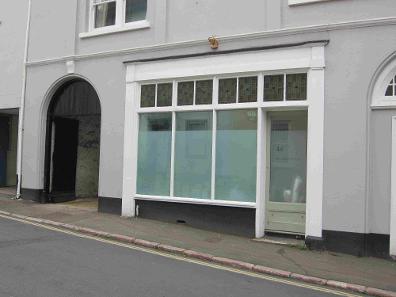 Left: 44 East Street.
My own photograph 2016
Mrs Elizabeth Ann Moss died in September 1938. She had come to Ashburton about 38 years before, after marrying Mr Ernest R Moss, a chemist and druggist. Mr Moss was secretary and a deacon of the Congregational Church.
Western Times, 23 September 1938, p13 col1
In 1948 Alan John Kerslake, trading as E R Moss at 44 East Street, gave formal notice that he was applying at the General Annual Licensing Meeting for a licence to sell medicated wines and cider. Mrs A E Kerslake was the owner of the premises.
Western Morning News 23 January 1948, p1 col5

Right: Advertisement for A J Kerslake, Official Guide of Ashburton, 1950s.
From my own collection
Below: Amy Kerslake outside the shop.
With many thanks to Jenny Gorton 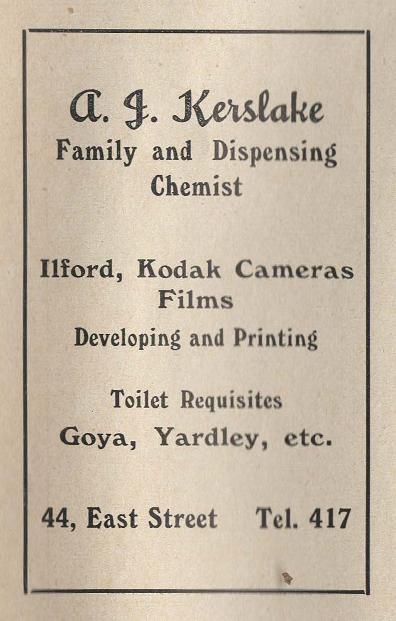 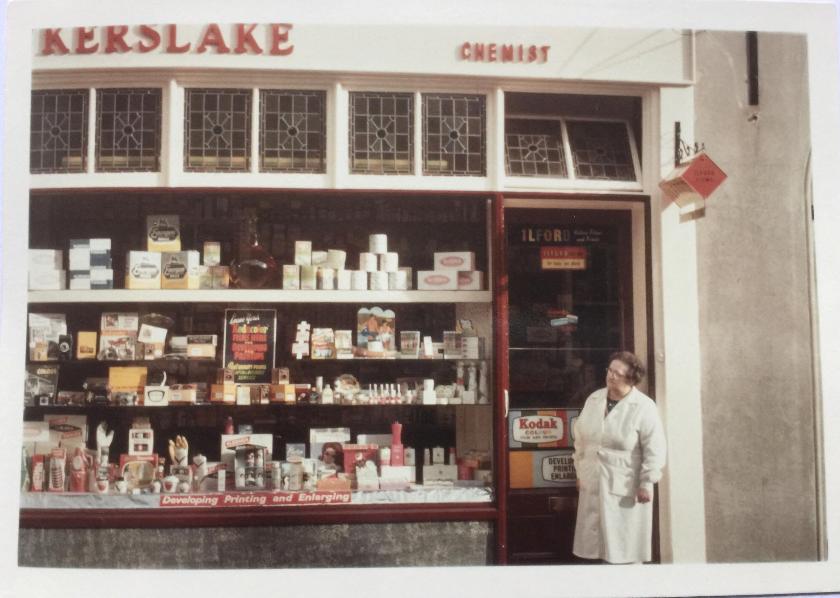 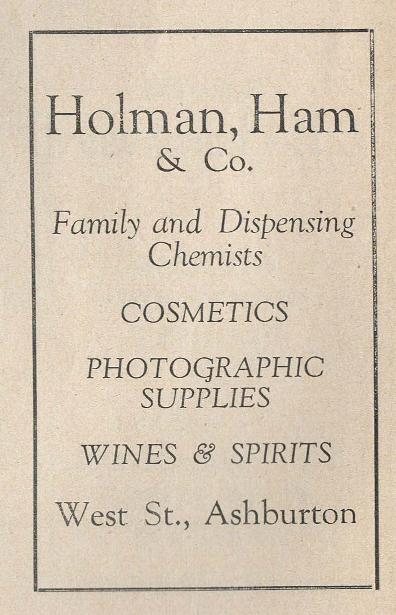 Above: Advertisement in the Official Guide of Ashburton, 1950s.
From my own collection

According to http://medicalgentlemen.co.uk John Holman, a druggist in Exeter, founded the firm of Holman, Ham and Co with his son-in-law James Ham. John died in 1828.
The firm eventually had 'several chemist shops' in Devon.
http://medicalgentlemen.co.uk/aboutthedoctors/holmans - Accessed 17-09-2016
There may or may not be a connection to John Holman, a chemist and druggist of George Street, Plymouth in 1833. He married Harriet Matterface in Ashburton in August.
According to the 1851 census for St Andrew, Plymouth, 48 year old John had been born in Devonport.
Western Times 31 August 1833 p2 col4
Parish records
1851 census HO107, piece no 1879, folio 556, p36
In 1924 men wishing to try the Durham-Duplex razor could obtain one from Holman, Ham and Co., Ashburton. Other branches mentioned were Exeter, Teignmouth, Crediton, Paignton, Sidmouth, Exmouth, Brixham and Totnes.
Exeter and Plymouth Gazette 12 March 1924, p2 cols 5,6 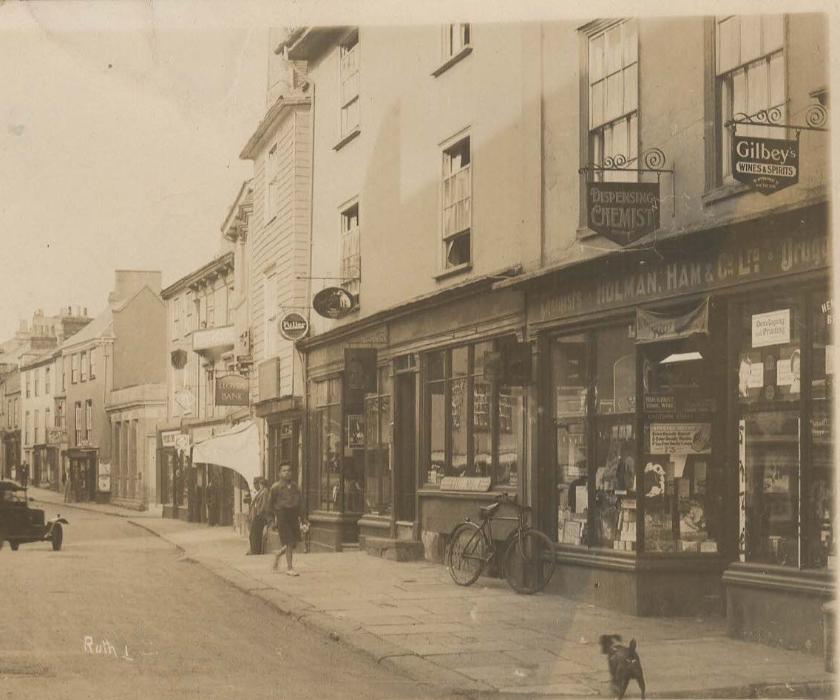 Above: Holman, Ham and Co. is the property on the extreme right.
From my own collection