In 1711 Furse close, part of Bayland tenement, Ashburton, was leased for a year at a peppercorn rent*. One of the parties was Hugh James of Ashburton, yeoman; the other was Robert Foote, also of Ashburton, a butcher.
Ref 2180/3 http://discovery.nationalarchives.gov.uk/details/r/31086e90-5b1f-46f0-a41a-ae6a5556acad
*A small amount, only charged to maintain a formal landlord/tenant agreement
https://www.property-tax-portal.co.uk/taxarticle157.shtml

Thomas Foot, butcher, had to appear at the next Quarter Sessions in 1738, to answer charges that he unlawfully took a bull belonging to William Bickford of Bickington, taking it into Newton Town and beating him with dogs. Robert Foot, butcher, is also named.
ref QS/4/1738/Midsummer/RE/65 5 July 1738, Devon Heritage Centre https://devon-cat.swheritage.org.uk/records/QS/4/1738/Midsummer/RE/65 - accessed 31-10-2020
A counterpart of a lease of closes of land in Ashburton from 1761/2 was from John Kelley of Exeter, gent to Peter Cockey of Ashburton, Devon, butcher
Deeds and associated papers relating to property at Ashburton and Buckfastleigh, ref MS3101/A/F/1/6, Birmingham Archives, Heritage and Photography Service, 1641-1761/2 https://discovery.nationalarchives.gov.uk/details/r/cfa9020a-69ca-43aa-ab19-41d09424cb3f - accessed 18-03-2021
Many thanks to Annie Pomeroy for passing on this reference
1766 Richard Bales, a butcher of Ashburton, was one of the parties to a lease and release of various lands and properties in Ashburton.
Ref 48/14/73/9a-c Devon Archives and Local Studies Service, http://discovery.nationalarchives.gov.uk/details/r/9868c0e0-a739-4cf1-8b50-f19bf6065164
Puttisham Wood, Buckland in the Moor, was leased for a year in 1766. Winifred Smerdon, a widow of Ashburton, and Richard Ellis of Ashburton, butcher were one of the parties; Richard Smerdon of Plymouth, a butcher, was the other.
Ref 74/693/15 http://discovery.nationalarchives.gov.uk/details/r/a17dc35e-bdc4-4d42-87bc-347cfba092f6

According to the website of Westminster Abbey John Ireland, who later became Dean of Westminster, was born on 8 September 1761 at Ashburton, the son of butcher Thomas and his wife Elizabeth.
http://www.westminster-abbey.org/our-history/people/john-Ireland - Accessed 21-09-2017

Amongst the sacrament certificates* held by the Devon Archives and Local Studies Service are ones for Thomas Ireland, an Ashburton butcher, for various dates between 1762 and 1774. The reference is for one in 1766.
Ref QS/21/1766/6 http://discovery.nationalarchives.gov.uk/details/r/f848a51c-a48d-46d2-872b-804c52e1edf9
*An oath of loyalty to the Crown and to the Church of England.
http://www.nationalarchives.gov.uk/help-with-your-research/research-guides/oaths-loyalty-crown-church-of-england/

A transcript of trades and professions from the Universal British Directory of Trade, Commerce and Manufacture, Vol 2, late 1700s
*******

Documents connected to the Palk family of Haldon, in the Devon Heritage Centre. Ref Z10

In 1839 John Pierce, butcher, gave evidence in a case of sheepstealing. He testified that some mutton found in houses of the accused was not cut up in the way a butcher would have cut it.
Exeter and Plymouth Gazette, 23 March 1839, p3 col2

Elizabeth Barnes, the wife of J Barnes of Plymouth, died in January 1841. She was the third daughter of Mr J Pearse, a butcher of Ashburton.
Western Times 13 February 1841, p2 col5

In the 1861 census there were 8 butchers and a butcher's assistant:

In the 1841 census William Mann, a butcher circa 35 years old, is living in East Street with his wife Elizabeth. With them are their four young children.

At Christmas 1848 William Mann supervised the distribution of meat to poor families living at Holne. Sir B P Wrey of Chace House and the Reverend H Wrey of Holne Park donated the fare - a conservatory had been cleared of plants to accommodate the mutton and beef, and 'resembled the establishment of an extensive butcher'.
Western Times 30 December 1848, p5 col4

In 1871 William Snr is an auctioneer, but his son Thomas W, living in the same household, is a butcher. William's son William, and his daughters Betsy Ann and Maria, all unmarried, are down on the census as 'No occupation'.
1871 census RG10, piece no 2080, folio 68, p10

In October 1875 William Mann, auctioneer, a widower, married widow Laura Charlotte Kingwell at the parish church. William's father is also William, but his occupation is hard to read.
Parish records
Laura married again as a widow in 1880. Her husband was George Perkins, a batchelor whose rank or profession was 'Gentleman'. In the 1881 census George is 42 and his wife 60 - although her age at death in 1888 (75) appears to show that she would have been nearer 68.
Parish records
1881 census RG11, piece no 2161, folio 68, p12
The Matterface family

John Campion Matterface was baptised in March 1803, the son of John and Harriot
Parish records

John Campion Jnr. was baptised in February 1834, the son of John Campion Matterface, a butcher, and his wife Sarah.
Parish records

In 1840 John Campion Matterface put an advertisement in the Western Times 'To Sportsmen and Others'. Apparently a fine dog called Monarch was for sale, whose qualities involved scent and speed. Monarch was well appreciated by those who hunted with 'The Tory Pack of Ashburton Hounds'. Joe Varnham [??], 'That Crack Sportsmen' had been in charge of the pack, now broken up because of the absence of the dog.
I suspect this advertisement is a comment on the relationship between the young Queen Victoria and her Prime Ministers. There had been a political crisis the previous year, Lord Melbourne had resigned, and Conservative Robert Peel had been expected to come to power. When the queen refused to comply with the usual requirement for Whig ladies of the bedchamber to be replaced with Tory ones, Peel then refused to form a government.
Western Times 5 December 1840 p1 col1
http://www.bbc.co.uk/history/historic_figures/melbourne_lord.shtml

By 1891 Sarah Matterface, aged 83, was a butcher, an employer, in East Street. Her son William was an employee, and her brother, 80 year old Thomas Ireland, was a butcher's assistant.

Charles Smerdon, born in February 1831, was baptised in June of that year at the Great Meeting chapel. He was the son of Thomas Pope Smerdon, a butcher, and his wife Ann Knott.
Non-conformist births and baptisms, available via https://search.findmypast.co.uk

1867 After a decree at the High Court of Chancery (Coope v Cresswell) a large number of properties and estates in Devon were up for sale. A house and butcher's shop in East Street , with Mr Charles Yolland in occupation, was one of them.
Western Times 24 September 1867 p1 col3
*******
1874. At Ashburton Petty Sessions John Palmer of Ashburton, butcher, was fined 15s plus costs for having two 'unjust weights'
Exeter and Plymouth Gazette Daily Telegrams 24 March 1874 p3 col4

In 1879 William Willis, a butcher from Ashburton, was one of the last people to see John Hawkins, a Totnes cutler, alive. William testified at the inquest that Hawkins was perfectly sober when he last saw him - later he was found drowned near Holne Bridge.
Western Times 18 March 1879 p7 col4

In the 1911 census Robert Mitchell is shown as a butcher in East Street, assisted in the business by his wife Elizabeth, daughter Annie, and George Poolman, aged 17. The property has a name - Hillview - but its number is not recorded: however, it is three properties down from Greylands, which we know is No 48. (See the 1900s section of People and Properties). As all the houses on that side of the street are even-numbered, Mr Mitchell and his family were probably at No 42.
http://www.ancestry.co.uk/ 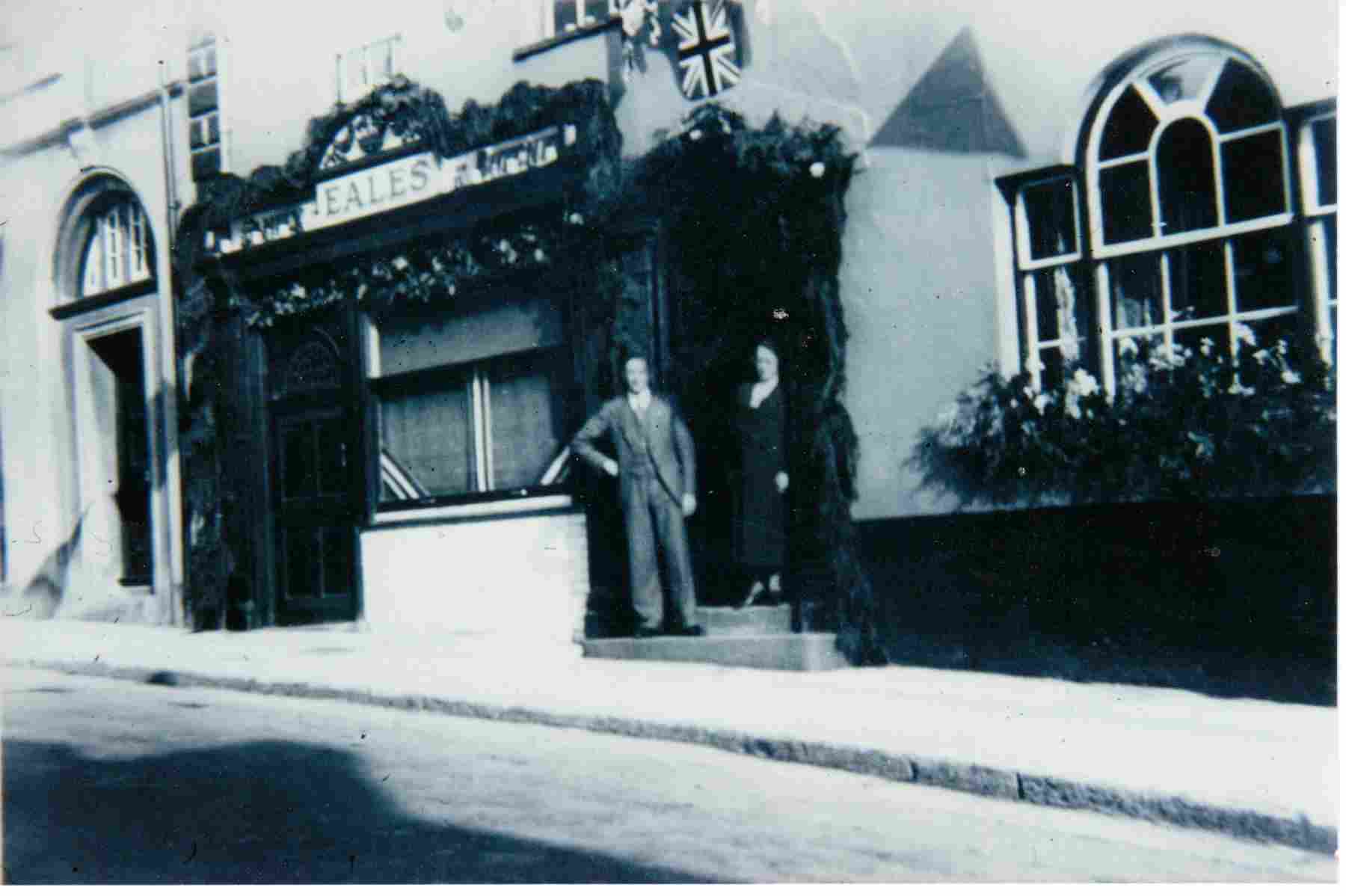 Above: 42 East Street when it belonged to W J Eales.
Thanks to Jane and Arthur Smith for all of the items and photographs connected with 42 East Street

In 1916 Rendell and Sawdye held an auction at the London Hotel for the sale of Nos 42 and 44 East Street. Freehold houses and shops, they were both owned by Mr C R Halse, who was occupying No 42. No 42 was a shop, house and premises with a walled garden and greenhouse; No 44 was a chemist's shop, house and premises, rented by Mr E R Moss, chemist.

A side entrance led to premises suitable for a butchery business, including a slaughterhouse, cowsheds and piggeries. Mr C H Halse was the successful bidder, buying both properties as one lot for £750.

In 1917 Mr S F Willis, a butcher of Ashburton, was accompanying Mr C H Halse of East Street when their car was involved in an accident. Cyclist James Shillabeer, who was riding to Newton Abbot with Florence May Rodgman, collided with the car at the bend of the Travellers Rest; he died a few days later. At the inquest, held at the market hall, Dr E A Ellis testified to the severe injuries that James sustained.
Western Times 13 July 1917, p3 col6

In Kelly's Directory of Devonshire 1935 Wm Eales is shown as a butcher at 42 East Street. The telephone number at that time was 50.
It is likely that William is on the 1911 census as W Eales, an assistant butcher to S J Willis, in North Street. W Eales was 16, and was born in Ashburton.
Kelly's Directory of Devonshire 1935, p35
http://ancestry.co.uk/
See the 1930s section of the Virtual Museum for W J Eales's 'Hygienic delivery bag.'
*******

By the 1940s the business belongs to G B Soper.

1942 George Brendon Soper of 42 East Street was summoned at the petty sessions for employing a boy under 12 years of age. With his parents' consent the boy had often ridden in the delivery van, and occasionally took a basket and delivered goods. He received no payment for this, but the County Education Committee's case was that the boy was employed, whether he was paid or not. The case was dismissed after costs were paid.

In February 1947 C C Roberts of the Forest Inn, Hexworthy, sent a letter to the Western Morning News. The letter, carried 7 miles through the snow, said that the last postal collection or delivery had been on January 29th, and the last delivery of provisions had been on Janaury 27th. The inn had been without a telephone since the first fall of snow.

Mr Roberts wanted to praise Mr Soper, butcher of Ashburton, who had twice attempted to reach the villagers of Hexworthy. On February 2nd he got as far as Holne Chase, where Mr Roberts had met him with a pack-horse; on February 8th he reached Poundsgate.

Mr Soper was Honorary Secretary of the Ashburton gymkhana horse and pony show for several years, and was mentioned in this capacity at 42 East Street in 1950 ( E R Tucker was joint Hon Sec at this stage).

See the 1940s section of the Virtual museum for items connected to G B Soper.

George Brendon Soper died in 1955, aged 49, and William George Smith bought the business at the end of July of that year.

Information about George Smith acquiring the business came from the family. 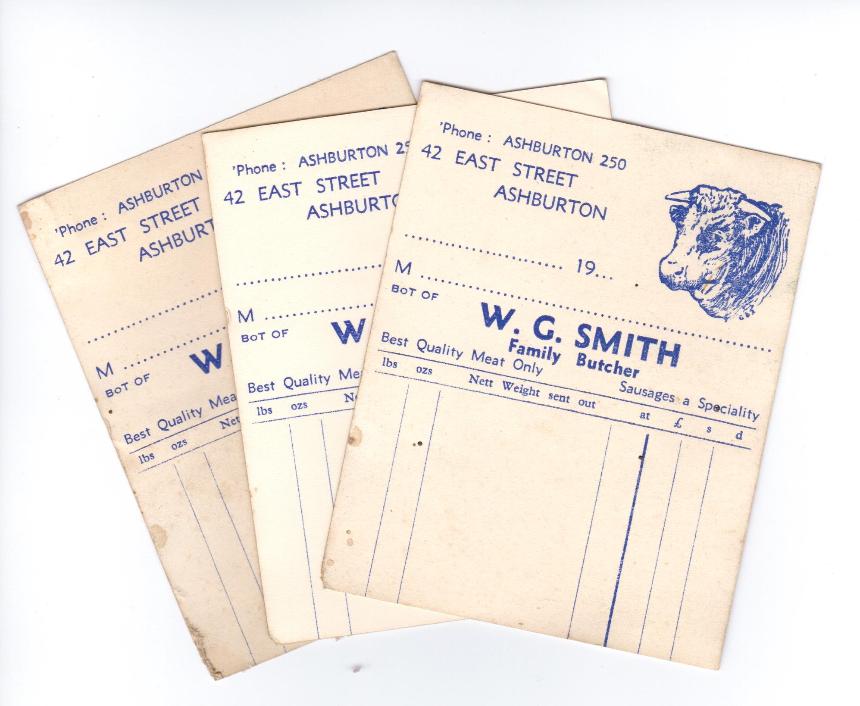 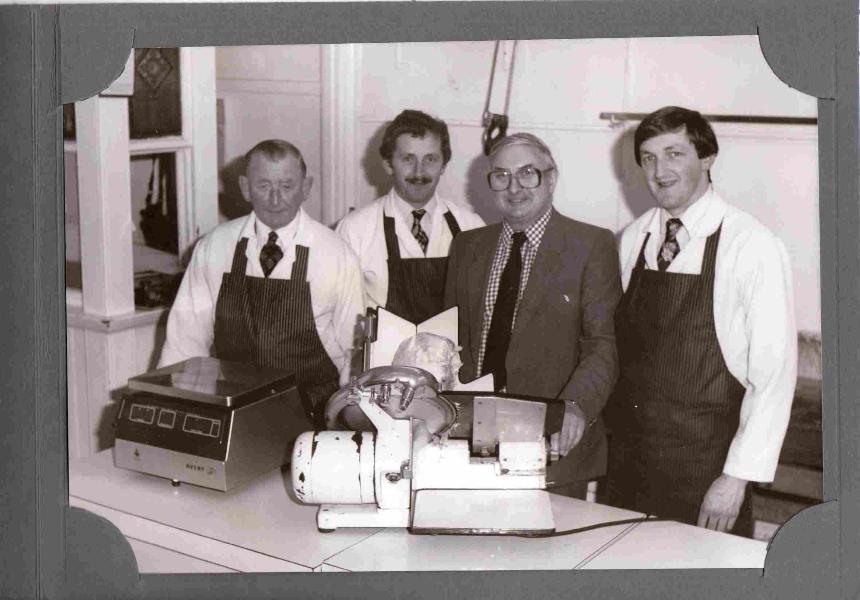 Above: This picture was taken when a company producing machines for slicing ham discovered that Smiths'  had the oldest working model in the country. 'They gave us a new one'. 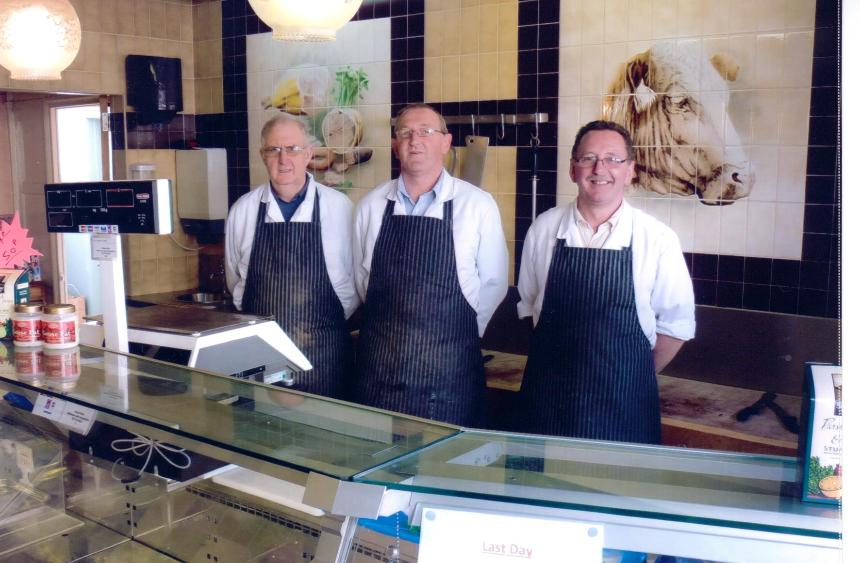 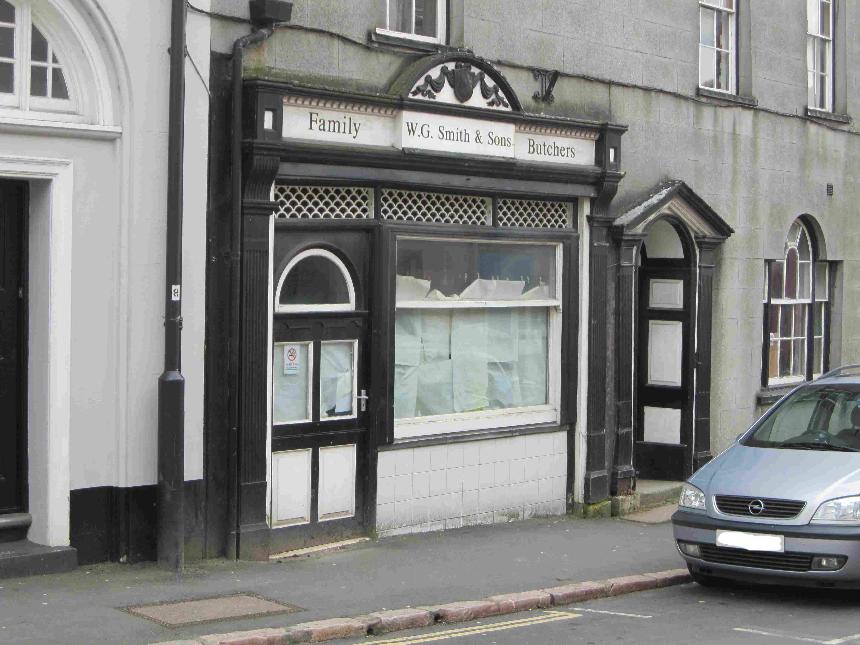