'There is a particular kind of beer brewed in Ashburton, in Devonshire, very full of fixed air, and therefore known by the name of Ashburton pop, which is supposed to be as efficacious in consumptions as even the air of Devonshire itself...'
Sir John Sinclair, Bart., The Code of Health and Longevity, London 1818, p100 (notes)

'There is a legend that Ashburton was at one time famous for a beer known as Ashburton "pop". Tradition in this case is true, because the matter is referred to in a letter to the Earl of Dartmouth published by the Historical MSS Commission.'
J Henry Harris, My Devonshire Book, Plymouth, 1907, p43

"I recollect its sharp feeding good taste, far richer than the best small beer, more of the champagne taste, and what was termed a good sharp bottle. When you untied and hand-drew the cork it gave a report louder than a pop-gun, to which I attribute its name; its contents would fly up to the ceiling if you did not mind to keep the mouth of the stone bottle into the white quart cup; it filled it with froth, but not over a pint of clear liquor. Three old cronies would sit an afternoon six hours, smoke and drink a dozen bottles, their reckoning bit eightpence each, and a penny for tobacco. The pop was but twopence a bottle. It is a great loss to the town, because its recipe died with its brewer about 1785".
Devonshire Characters and Strange Events, S Baring-Gould, Bodley Head Ltd., London 1908 (this edition 1926) p 74

According to Peter Hore, Ashburton pop featured in a naval dispute in 1801. William Cuming, who was born in Totnes, was in command of a ship called Russell, which had been involved in the Battle of Copenhagen. One of Cuming's lieutenants, Nesbit Josiah Willoughby, later accused Cuming of behaving in an unofficerlike manner, using blasphemous language, striking his officers and being generally oppressive. Cuming was, the court heard, particularly fond of Ashburton pop.
Cuming was aquitted, but Willoughby, who was heard to say that he hoped there would be plenty of Ashburton pop for dinner, was then charged with insolence and contempt - he was dismissed from the service.
Captain Peter Hore, Nelson's Band of Brothers: Lives and Memorials, p63

Right and below: A bottle inscribed MITCHELMORES ASHBURTON POP 1835
Many thanks to Rachel Wood for these photographs 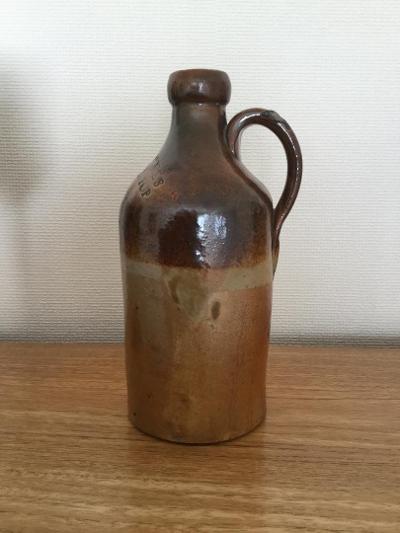 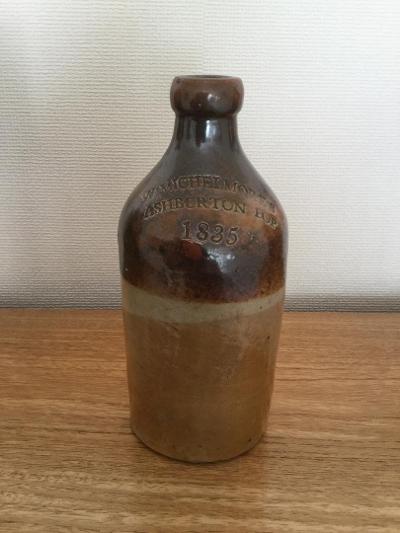 This might be explained by J S Amery, in an appendix to his Presidential Address to the Devonshire Association in 1924. Describing three glazed stoneware bottles belonging to Miss Lamason, he notes that one is inscribed 'R Halse Junr, Ashburton 1771', and goes on to say that in 1835 W Michelmore tried to revive its manufacture. A second bottle is inscribed 'Carlile's Ashburton Pop revived by W Michelmore'. A third one says 'W Michelmore, Ashburton Pop, 1835'.
Report and Transactions of the Devonshire Assocation, vol 56, Plymouth 1925, p102
William Michelmore died aged 68 in September 1846. He had been the landlord of the Royal Oak Inn for some years, and had been 'brewer of the that excellent beverage, Ashburton Pop'.
Western Times 12 September 1846, p5 col1

In 1849 a Mr Rossiter had developed an anti-ferment compound, that would, he claimed restore old, 'ropy or reamy' cider.

Nathan Beck*, an Ashburton chemist, was happy to endorse the product - one packet had, he said, restored the colour and taste of a hogshead of old cider.
Western Times 15 September 1849 p2 col5

For more on cider, see Farmers, under Banks and Businesses

June 1856. Cecil Torr's grandfather wrote to his father about the dinner and tea that he had given the villagers of Wreyland, near Lustleigh. It included roast beef and plum pudding, washed down with good beer. Then for tea, at 5 o'clock, there were 'Ashburton cakes and bread with plenty of cream and butter'.
Small talk at Wreyland, Cecil Torr 1970 edition. Adams and Dart, part 1 p 25

1st October 1848. An new Act of Parliament stated that bread had to have the weight stamped on the outside. The penalty for non-compliance was 40s.

Should the weight be lighter than was marked, a 5s fine was imposed for every ounce the bread was underweight. Similar rules affected the sale of meat and dairy products.

November 1848. Inspectors of Weights and Measures were appointed at the Court Leet. Most items inspected were satisfactory.
Exeter Flying Post 9 November 1848 p8 col3

Mr Edwards, Inspector of Weights and Measures, charged John Gerry, of the Royal Oak Inn, with having 17 unstamped and 2 unjust measures. In mitigation, Mrs Gerry claimed that she had not had time to buy and wash new measures between Mr Edwards' original visit on a Friday and a subsequent check the following Monday.

The magistrates imposed a fine of 7s for the unstamped measures, dismissing the rest of the charge.
Exeter and Plymouth Gazette 24 April 1894 p7 col5

1880 The Sunday Closing Association had recently sent representatives to advocate stopping the sale of alcohol on Sundays. As a result of a meeting at the Market Hall Messrs Craddock, Down, Clark and Mann had distributed and collected voting papers to Ashburton householders. Of the 75% who responded, 203 voted for closing, 53 had voted against, and 42 had no preference either way.
Western Times 29 October 1880 p8 col4

Horses and carts were common sights, delivering coal, logs and also milk and bread to housewives. The local dairyman at the bottom of Woodland Road brought milk on foot twice a day to his customers: he carried a covered milk pail, and measured the milk (still warm from the cow) in to a jug. Unhygienic and untreated, and it tasted delicious. The cows were brought down to the adjoining yard to be miked twice a day by Mr Stanbury, an old man with a flowing beard and brooding expression, who looked to me like one of the old testament prophets we saw in picture books. It was his son, Dick, Mary Woolacott's father, who brought the milk to our doors. A glass of fresh milk was a comfort to a sick child, especially with a sprinkling of grated nutmeg on the top. 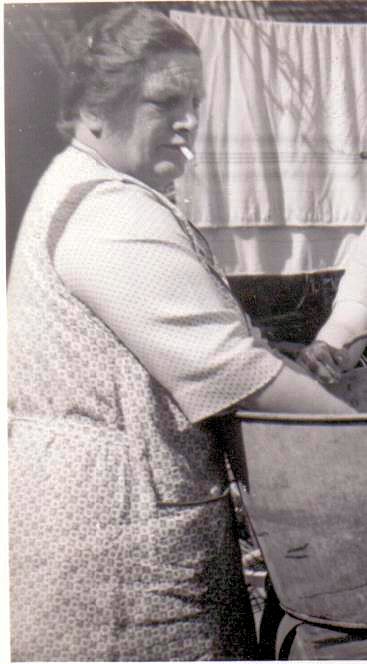 Above: Mrs Stanbury in 1955
From my own collection
Mrs Stanbury served us with dairy products – I was fascinated to watch her weighing clotted cream. We took our own glass, and went through the doorway into a granite floored passage. A door on the right which was kept tightly shut, led to the 'best' room. A table stood between this doorway and another which led to the yard: between these two doors stood a table with large white enamel bowls, containing milk which had to stand for the cream to rise to the top. This would then be scalded for another day's supply. Opposite the best room was the entrance to the living room - all the dairy products were arranged for sale at the lower end, and in pride of place was a large bowl of clotted cream. Next to it stood the scales with a variety of weights and small objects. It was a fascinating process and required great concentration.  The glass was placed on the scales and weighed, but it was never exactly ounces or half-ounces, so interesting objects were used, such as a faded pink plaster miniature toy, and a loop of wire. Once the glass and the weights balanced, the cream was spooned into the receptacle. Time hasn't dulled the memory of how the cream looked, with its golden crust on the top - I would give much to enjoy the taste today. Scalded over a wood fire the flavour was delicious and distinctive, and when it was eaten with honey from the comb, it was called thunder and lightning. Public health officials would scorn such practices, but to us it was the food of the gods. 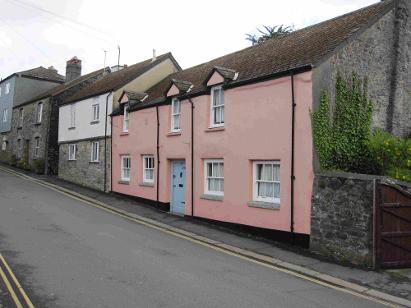 Above: Where Stanbury's dairy was
Right: The date on the wall
My own photographs 2014 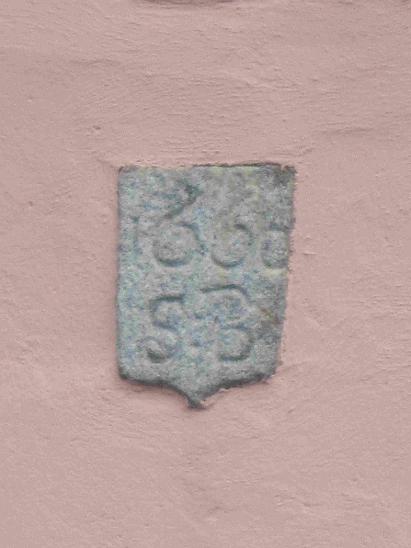 There were several bakers. Barnes in West Street supplied bread and a rich assortment of fancy cakes – mouth watering, they provided a welcome treat for Sunday tea. Their hot cross buns were looked forward to eagerly, appearing only on Good Friday. Andrews, the baker at the bottom of East Street, perhaps sold plainer fare but the memories of his bread linger still. On Mondays he made what was known as a 'twist' – today we would say 'plait', but they bore no resemblance to the modern version. It was unglazed: we had it broken off in chunks and eaten with local farm butter. He also made Bermaline bread, an oval brown loaf with a blue and white paper cuff proclaiming its properties. This bread had exceptional keeping qualities, and retained its flavour and freshness for days. Barnes made 'tuff' cakes, sometimes referred to as 'splits' – about the size of a small dough bun, they were very slightly sweet and made to eat with the traditional jam and cream teas. Andrews made plain bread buns, larger than a tuff cake, which resembled baps and were subtly flavoured with a couple of caraway seeds. They were known as 'Ashburtons' and were also bought for cream teas. I remember with nostalgia the smell of newly baked bread. Bread rolls, dough cakes, meat patties and fruit tarts were also available. There were other bakers in the town, well known for their specialities, but in a little place like Ashburton, people kept to their own territory.

Many thanks to Hazel Bray for the above account.

In 1943 the ceremony of ale tasting was revived - it had not been performed for some years.

Breadweighers - Mr Amery Adams and the Rev L B Stallard

1949 R Arscott and W J Eales pronounced that the ale was 'improvin' ev'ry yer' at the traditional ceremony of ale-tasting and bread-weighing. They formed part of a procession including the portreeve, bailiff, steward, chaplain and others, all dressed in full regalia, and in the case of the ale-tasters, with the addition of home-made red noses. Preceded by a brass band, they toured the 10 hotels and inns of the town.

The bailiff knocked three times on each inn door, instructing the landlord to bring out two tankards of ale so that the tasters could judge the quality. Each inn was presented by greenery to hang on the door, and a certificate to show that the ale came up to standard.

A large crowd watched the procession, including Mr Roy Kellino and executives of Associated British Pictures Corporation, who were in the town filming 'The intruder'*

*Better known as 'Guilt is my shadow'  http://www.citwf.com
See the website Reelstreets https://www.reelstreets.com/ for screenshots from the film