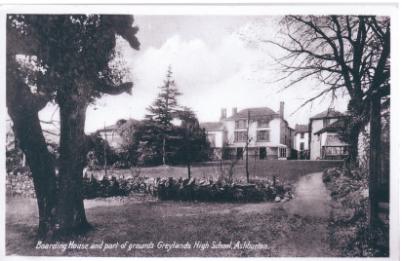 'The school was eccentric - very odd, the whole thing'

The Wilderness School closed for good. Down on the Greylands site a school continued from at least 1946 under the name of Ashburton High School – Anne Douglas, nee Lethbridge, was a pupil there from the age of 4 until she was about 17. At first the school was for both boys and girls, but later it catered just for girls and a mixed kindergarten. The enigmatically and briefly named Miss W D'O was headmistress – she kept this name after marrying a Mr. Weaver in 1948 (FreeBMD).

Winifred Mary D'O was born in Wanganui, New Zealand, in 1909, the eldest of three sisters. She seems to have ended up in the UK by accident. Originating from New Zealand, she was the secretary of the German club* in Auckland in the late 1930s, and she set off on a visit to Germany late in the decade. Travelling on a British passport, she arrived in Germany on or about the 3rd September, which was the day that the 2nd World War was declared. She was turned around and went to the UK, where she remained, never returning to New Zealand. (Many thanks to John MacDonald, nephew of Miss D'O, for the above information).

* The Auckland Star describes an evening reception at the German club rooms in 1938, held for the Count and Countess von Luckner. Blue hydrangeas and flags decorated the room, and 'the stage was banked with greenery, and in a striking position was placed the New Zealand flag and the German flag with its black swastika upon a white circle and a red background.' Winifred D'O was amongst those attending the event.

Anne remembers Miss D'O as being very well spoken, with a deep melodious voice. An advertisement in the Ashburton town guide book of the time states “A feature of the school is the tuition of languages, music and dancing”. Hazel Bray can confirm this – although not a pupil, she says that there was singing and dancing outside. In particular, she remembers an outdoor concert, with the girls singing 'Oh no, John'. Anne recalls that the school was very strong on languages, with French, German and Latin being taught, and one or two girls even learning Greek and Russian. There was a French mademoiselle and a German fraulein there whilst Anne was a pupil – in November 1950 Mlle La Paire, a teacher at the school, laid poppies on the grave of the French prisoner of war who is buried in St. Andrew's churchyard. (Exeter and Plymouth Gazette Nov 17th 1950 p5 col 4 )

Sports played included tennis, swimming and hockey. Felicity Ford, nee Burrows, remembers tennis as being the chief activity of the school. 'On good days we played tennis, on other days we did other stuff'. It was, she added, 'eccentric – very odd, the whole thing'. She does recall that there was a lovely music room with a piano, and that a woman heavily involved with amateur dramatics (Moira Babbington?) was the elocution teacher.

Other teachers Felicity named were Miss Moore, Mrs. Hill, Mrs. Beaverbrook (?) and her own mother, Mrs. Burrows. Anne added Miss Wolf and Miss Scanlon to this list. She says that the High School had a strong association with the Catholic Church - Father Stephan (?) came to give lessons in Religious Instruction. Some teachers were 'handy with a ruler' but Felicity loved the school – even though pupils had to run the gauntlet of various animals. 'There were two vicious goats,' she recalls, 'tethered with long chains. The goats were moved around the grounds, so you had to judge how long the chains were if you had to go past them. Then there were the dodgy dogs – white alsatians called Bruno and Marcus. I don't think they bit anybody.....'

Pat Blayney was a pupil at Greylands from about 1949 to 1954. 'I was a day pupil. Miss Scanlon and Miss D'O were both my teachers. I remember Moira Babbington very well. I heard that she was on a cookery programme on television. I do remember that Moira Babbington used to teach drama about once or twice a week and she had a little theatre in Ashburton. In fact the school used to compete with other schools in verse speaking and I remember being one of the cast of "Cranford"  I played the part of Mrs. Gaskell. 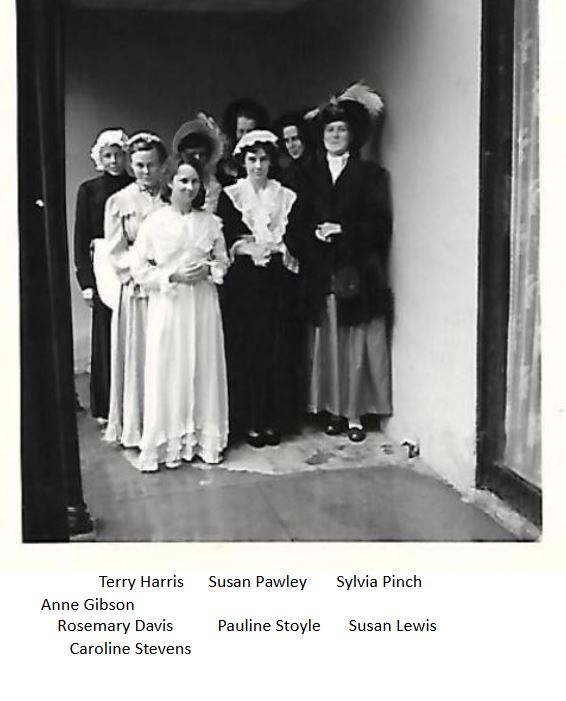 Above: Some of the cast of Cranford, 1954.
Many thanks to Anne Mortimore for the above photograph

I believe Miss D'O was originally from one of the commonwealth countries. I remember she kept an amazing assortment of marionettes and we used to put on puppet shows. Miss D'O was a bit sloppy in her dress but she was a good teacher. Miss Scanlon I believe was Irish.
The tennis court I remember very well.  We used to have gym and netball there as well as tennis. Cynthia Hall attended the school with her sister, and Cynthia was a good tennis player. They were both boarders.
Some of the girls took ballet lessons at the school. One of the girls from Holne once rode her horse to school! I think her name was Middleton.
I remember Mr. and Mrs. Hunt: Mrs. Hunt used to take us for gym. They came to the school relatively late.'

Hazel remembers the children of the local bank manager going there. As with the earlier Wilderness School, many of the pupils were from abroad – India, for example.

The school also had foreign students during the normal holidays – Felicity mentions German students in particular.

Pat continues: I always wanted to go to Ingston, which was more of a convent on the way to Newton Abbot, near an agricultural college. But my father was not keen on paying the additional fees. When I was in Miss Scanlon's class I spent quite a bit of time on my knees in front of her desk and outside the classroom door for misbehaviour. We used to giggle a lot in her class. I don't think she made the lessons interesting enough. Miss D'O was another matter: I bloomed in her class but still didn't take any of it seriously enough. I think the main objective was to make young ladies out of the local girls. Miss Babington had her hands full in trying to teach elocution to a bunch of farmers' daughters who had strong Devonian accents.

Anne believes that most of the pupils were day girls – some left after the 11+ to go to grammar schools. In later years Felicity didn't think that she could take the 11+ at the school: 'something to do with regulations – the school wasn't accredited with the Local Education Authority'. The school closed soon afterwards – circa 1961.

Miss D'O continued living at Greylands after the High School closed - she is listed in telephone directories as Winifred M D'O until at least 1967, and then until 1975 under her married name of Mrs. Weaver (she married David J Weaver in late 1948 - FreeBMD). She died in 1989 (John MacDonald).

She may or may not have been the owner of the property when the South Devon Steiner School rented the premises to open a school in September 1979 (alternativetotnes.wordpress.com page 2) The school stayed there until 1981, when it moved to Sandwell Manor(ibid).
6 years later, in 1987, "Fourteen students and three teachers...gathered in a garden and designed a new school." (A Brief History of Sands School, Parent Information Pack, Sean Bellamy 2009 p 3) The school is still thriving 25 years later, encompassing an ethos of "trust and respect rather than some imposed artificial hierarchy; respect earned and not expected; responsibility shared...staff remaining open to creative criticism and judgement by their colleagues and pupils...and perhaps fundamental to it all - an intuition that there is always more to learn." (ibid)

Henry Naylor would not recognize it.