The Sparke and Amery families

James Spark, a widower, married Margery Fabyan in Ashburton in October 1767. Both were of the parish.
Parish records

The will of James Spark, butcher of Ashburton, dated 30th October 1801, is held at the National Archives.
Ref PROB 11/1364/245, http://discovery.nationalarchives.gov.uk

*******
In a marriage settlement in 1813 Lavington Evans put £500 in trust to Peter Fabyan Sparke, sergemaker, and Samuel Evans of Ottery St Mary for Mary Sparke, of Ashburton. She was betrothed to L. Evans.
Ref 14152/73 http://discovery.nationalarchives.gov.uk
Devon Heritage Centre holds a document stating that Mary Sparke was a minor, and her mother consented to the marriage, 'her father being dead and no sufficient guardian being appointed'
Devon Heritage Centre ref DEX/7/b/1/1813/5 https://devon-cat.swheritage.org.uk/records/DEX/7/b/1/1813/5 - Accessed 15-10-2018
*******

In 1827 John Orchard and John Orchard, father and son, were committed for trial on a charge of fraud. A Mrs Lane had lent Mr Orchard Snr. £1000 on some property, but the deed, for the Ford Estate, had been altered with the intention to defraud. During the course of the trial it was revealed that Mr Sparke, of Ashburton, had lent Orchard Jnr. £1400 on the same estate.
Orchard Snr, nearly 80 years old, and apparently having difficulty knowing what was going on, was found not guilty. John Orchard Jnr. was found guilty, and sentenced to death.
Morning Advertiser 30 March 1827, p3 cols 2,3

Mr P F Sparke of Ashburton is one of those who made a donation to The Society for Educating the Poor of Newfoundland.
Laws and Regulations of the Newfoundland Society, undated, available through https://books.google.co.uk

The will of Peter Fabyan Sparke, gentleman of Ashburton, dated 16th May 1844, is held at the National Archives.
Ref PROB 11/1999/139, http://discovery.nationalarchives.gov.uk

A worsted and ABB [?] mill at Buckfastleigh was for sale in 1844. Suitable for 'woollen, silk, flax, paper, or any other business where great power is required', it was being sold on the death of the late proprietors.
Interested parties were to the present proprietors, Tozer, Sparke and Co., Ashburton.
Western Times 13 July 1844, p2 col2

12 July 1811 John Amery of Lustleigh married Mary Fabyan Sparke at Ashburton, by licence. Mary was of the parish.

Sarah Ann Amery, with parents John and Mary Fabian Amery, was baptised at Brook Street Independent, Tavistock, in May 1814. They were of Lustleigh.
England and Wales Non-conformist Births and Baptisms, available via https://search.findmypast.co.uk 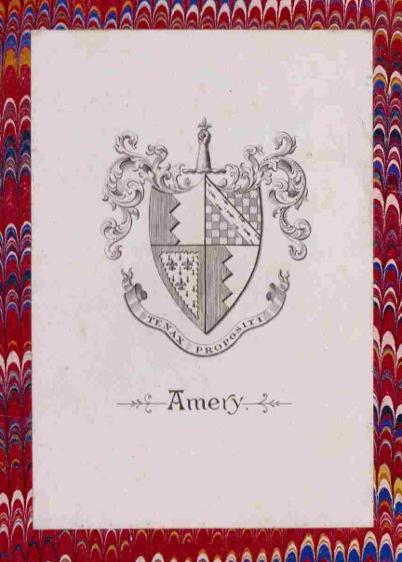 Above: Bookplate showing the Amery arms.

William Fabyan Windeatt was the owner Of Druid house and plantation (and more besides) at the time of the tithe apportionments (1836 onwards), with John Sparke Amery as the occupier.
https://new.devon.gov.uk/historicenvironment/tithe-map/ashburton/

Therefore William Fabyan Windeatt and Frances were brother and sister.

The birth of Peter Fabyan Sparke Amery was registered in the September quarter of 1839, in the Newton Abbot district. The mother's name is written as Windcatt.
https://www.gro.gov.uk

In 1846 J Sparke Amery (Snr) gave his annual dinner of roast beef and plum pudding to thirty old men of the town. They were each given 2s 6d.
Western Times 14 March 1846 p6 col4

Convinced of the benefits of allotments, he let out about 7 acres. They were mostly taken up by young men in the wool industry, who could then grow food when 'trade is dull, and they have no employment.'
Western Times 12 December 1846 p5 col4

When Mr Matheson announced that he was no longer going to offer himself as a candidate for election as Ashburton's MP, J S Amery, in his role of Portreeve, called a public meeting to debate the matter.
Western Times 3 July 1847 p5 col2

By 1861 his wife Catherine had remarried (Gabriel Beer Lidstone) and was living in Kingsbridge. Her 9 year old daughter Frances Elizabeth Amery, and 8 year old son Jasper John Amery were with her.
Parish register
1861 census RG09, piece no. 1425, folio 59, p1

In July 1863 three children of Jasper Addems Amery, gentleman, and Catherine Wreford Tozer Amery were received into the church at Dodbrooke. Mary Catherine, born May 1849, Frances Elizabeth, born in June 1851, and Jasper John, born in March 1853, were all baptized.
Dodbrooke parish records

1859 J S Amery was one of the purchasers of The Borough Woods. Shirley Woolmer Esq. was the other.
Western Times 16 April 1859 p7 col3

The Lustleigh Society has 27 entries for members of the Amery family buried in Lustleigh. The database can be accessed here: http://www.lustleigh-society.org.uk/home-page/lustleigh-graves/

Being able to vote in Victorian times depended on a man owning or renting property, and there were constant disputes and objections (see the Election fever sub-menu under Gathering together for more on this topic).

In 1863 Mr Daw objected to John Sparke Amery,  F P S Amery and James Henry Prout having votes because of buildings and land that they rented from the Duke of Somerset at Weston Road, Tramridge. (this appears to be in Totnes). Mr Daw contended that a Mr Barter was the real tenant.

1869. P F S Amery gave a lecture on Combustion., illustrated with a large number of experiments. At the end of the talk he went to the top of St Lawrence Tower and burned a magnesian torch, which lit up large areas of the town beneath.
Western Times 22 January 1869 p8 col2

1870 Mary Catherine Amery married John Richard T Kingwell. In 1926 she was described as the daughter of the late Jasper Amery, and niece of the late J Sparke Amery.
http://www.freebmd.org.uk/
Exeter and Plymouth Gazette 2 November 1926 p2 col1

15 February 1882 Frances Amery, widow of John Sparke Amery, died aged 76. In the report of her funeral the Western Times stated that on her mother's side she was connected to the Fabyan family of Ashburton*, who had a long connection with the woollen trade. 'She was a staunch, but by no means bigoted Nonconformist.'

Peter Fabyan Sparke Amery, son of the late John Sparke Amery, died in July 1907. A JP and County Councillor, he was also a Colonel in the 5th F.B.D.R. He was perhaps best known for his interest in antiquities, and was a member of the Devonshire Association.

Quoting an obituary in The Times, the Exeter and Plymouth Gazette wrote that the two brothers, Lieut Col Fabyan Amery and John Sparke Amery, were the 'twin stars at the centre of every movement for the social or intellectual advancement of their native town.'

In Ashburton churchyard there is a memorial to Peter Fabyan Sparke Amery, 'of Druid', who died 26th July 1907, aged 67. John Sparke Amery, who died on 13th April 1929, aged 83, also features on the gravestone.
http://www.ashburtonarchive.org.uk

In 1934 a 17th century window was placed in the Congregational Church, in memory of the two Amery brothers
Western Times 26 October 1934 p14 col6

For the Amerys' involvement in mining and building, see the Quarries and mines, and the Ashburton Building Company sections under Banks and businesses.