Henry Stentiford, born on November 6th 1814 (note in parish records), was baptised on December 26th. He was the son of John Stentiford, 'sadler', and Eleanor.
Parish records

In March 1840 the marriage was announced between H Stentiford of Ashburton, saddler, and Priscilla, daughter of Mr G Pike of Stoke Damerel.
In 1851 Henry Stentiford, a saddler aged 37, is living in North Street with his wife Priscilla and their two daughters. They are next door to Edward Husson, innkeeper.
Bristol Mercury 14 March 1840, p6 col5
1851 census HO107, piece no. 1871, folio 319, p13

***
1836. Joseph Fitze, presumably the same Joseph Fitze as below, had been elected by the Newton Poor Law Union to be the Registrar for Births and Deaths. It was his 'anxious study to give that satisfaction to the Public at large which the appointment requires'.
Western Times 17 December 1836, p1 col4

In 1861 seventy two year old Joseph, a widower, was living in East Street. He had been born in Liskeard, Cornwall.
1861 census RG09, piece no. 1405, folio 68, p8
***
James Perrott, a sadler and harness maker from Ashburton, married Deborah Edwards at Hennock parish in February 1818.
Hennock parish records
James Warren Perrott, was baptised in May 1820, the son of James and Deborah. James was a saddler.
Other children of the couple included Deborah, born January 1819 but apparently baptised in April 1820, Francis William Perrott, baptised in January 1822, Elizabeth Mary, baptised in May 1825, Anne Parker Perrott, baptised in April 1827, and Richard Jason, baptised in January 1829.
Parish records
James Warren Perrott [Warren inserted with a ^] was buried in January 1836, aged 50.
Parish records
In February 1840 Deborah Edwards Perrott, late of Ashburton, married John Husson at St Petrock's Exeter.
The couple celebrated their Golden Wedding anniversary in 1890.
Western Times 12 February 1890, p2 col4
In the 1841 census six people named Perrott were living in North Street. Ages are approximate, but they included Deborah Perrott, 45, James, 20, and Francis, 15. All three were sadlers.
1841 census HO107, piece no 253, folio 9, p13
Mr J Perrott, sadler, suffered a fire at his North Street premises in July 1848. John Roaden, overseer, was in the house to the left of the property; Mr S Mann, newsagent, was to the right. At about 1am Mr Mann saw the reflection of the flames in a window on the opposite side of the street, and raised the alarm. Mr Perrott's entire stock was burnt, as was some of the goods of Mr Mann. The property was insured with the Sun and Norwich Union.
Western Times 15 July 1848, p5 col4
James Warren Perrott married Elizabeth Stockman, a widow, on 18th July 1848. The marriage took place in the parish of St. Thomas. James was a saddler from Ashburton; his father was also named James Warren Perrott, and was also a saddler.
St Thomas parish records.
Thomas Adams Perrott, the son of James Warren and Elizabeth Perrott, was baptised in May 1850. James was a sadler.
Parish records
Ann, the third daughter of the late J Perrott*, saddler, died at Ashburton in March 1850. She was 22.
* James Perrott Snr.
Western Times 30 March 1850, p4 col6
James Perrott*, saddler and harness manufacturer, was advertising in The Field in 1858. He was at 11, London-Street, Norfolk-Square, eleven doors from the Great Western Terminus, Paddington.
*James Perrott Jnr.
The Field, 28 August 1858, p20 col3
Deborah Perrott, the relict of the late James Warren Perrott* of Ashburton, died in December 1860. At the time of her death she was with her son, James Perrott, of 11, London-Street, Norfolk-Square, London.
*ie James Perrott Snr
Exeter and Plymouth Gazette, 28 December 1860, p5 col5
Jas. Warren Perrott, saddler and harness maker, was listed under insolvents in July 1861.
Perry's Bankrupt Gazette, 13 July 1861, p6 col1
***
In the 1851 census 68 year old Walter Taprell was a saddler and harness maker in North Street. His wife Mary was a schoolmistress.
1851 census HO107, piece no. 1871, folio 294, p17

***
In 1855 George Langler, a saddler, brought a case against E Hopkins, a conveyancer, to recover £14 13s 3d for work done - harness had been supplied for horses at Hawke's Farm, near Ashburton. Mr Hopkins had only paid the full amount when a writ had been served, and Mr Langler now wanted costs. An added complication to the case was the question of where Mr Hopkins actually lived, which would have determined where the case should have been tried. The case was decided in favour of the plaintiff.
Western Times 29 December 1855, p5 col3

George married Caroline Husson, daughter of Edward Husson, innkeeper, on Christmas Day 1858. He was of 'full age' (ie 21); she was 20.
Parish records

'A family squabble: Hard swearing.'
George Langler, a saddler, was co-defendant (with Walter Husson) in a family dispute in 1876. The plaintiff, a tailor and draper, was Walter Husson's uncle; George Langler was married to the plaintiff's niece. The plaintiff had provided mourning clothes for the family after the death of his brother in March 1875 - the dispute concerned who had ordered the clothes.
Exeter and Plymouth Gazette Daily Telegrams, 15 August 1876, p3 col5
For more details see The Globe, under Inns and Hotels, and Disputes, under the Gathering Together section.

George Edgcombe, an Ashburton saddler, was a witness in a 'curious gin case' in 1860. Mr Edgcombe had borrowed two gins [traps] and put them in his garden. One then went missing, and some months later Mr Edgcombe saw the gin in Mr Westaway's possession, when it had a rat in it. Robert Tucker, who had lent the trap to Mr Westaway, maintained that he had found it, but was charged with stealing the item. During Edward Westaway's testimony it transpired that he and Mr Edgcombe were not on good terms, 'he having lost fowls'.
There was some question as to whether the gin which Mr Edgcombe lost was the same one that Robert Tucker said he found; that, together with the length of time involved, resulted in the prisoner being acquitted.
Exeter and Plymouth Gazette 7 April 1860, p9 col6

George Edgcombe met with an accident whilst returning from Widdecombe Fair in September 1870. He was travelling in a trap that overturned near Chittleford turn, and suffered a two inch wound to the temple, loss of blood and concussion. He was treated at a nearby farmhouse by Mr Pringle, assistant surgeon to Dr. Gervis, and was taken home the next day, but died that night from concussion and loss of blood.
An inquest was held, with the jury recording a verdict of accidental death. They recommended that the Coroner write to the Highway Board concerning the dangerous turn at Chittleford.
Totnes Weekly Times 24 September 1870, p4 col3

In 1926 J Eales and Sons, saddlers, were looking for a working housekeeper. The situation was described as being with a bachelor living in a farmhouse, with milk being sold.
Western Morning News, 6 February 1926, p12, col3 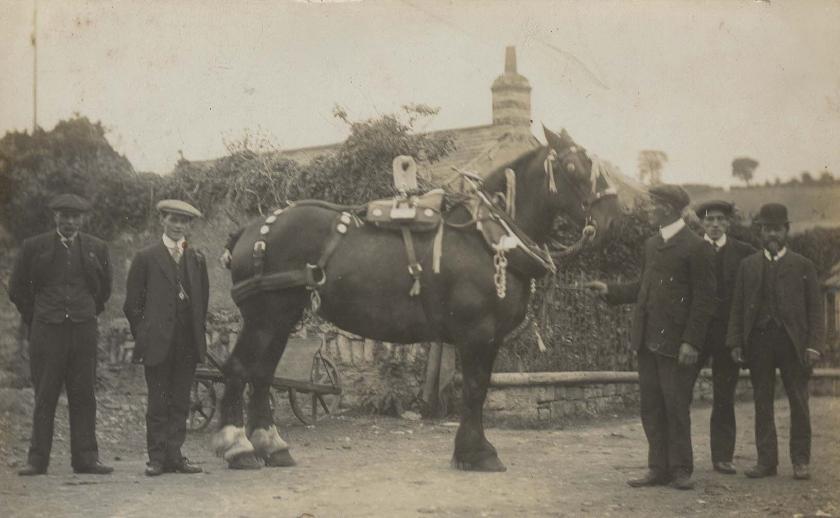 Above: Horse in decorative harness. Photograph by Wilfred J O Evans, Ashburton.
From my own collection

In 1929 Archibald Brailey, a horseman, was up before the magistrates for stealing a set of brass bells and harness decorations from Leonard Foot. Mr Foot had entered a horse into the Ashburton carnival the previous year, and Archibald had helped him clean the harness and ornaments, which Mr Foot had borrowed. The bells and decorations went missing, until Mr Foot saw them on a horse in Buckfastleigh. Walter Kernick, of Brook Farm, said that he had bought the items from Archibald Brailey for 1/-. The defendant denied the charge, saying that he had harness of his own, but was fined 30/- for the theft.
Western Times 4 January 1929, p11 col4