Ashburton people in Crown Pleas of the Devon Eyre* of 1238

Geoffrey le Faucher, living in Ashburton tithing, was outlawed with another man for the death of John the marshal.

Ashburton was in mercy.**

Ashburton was in mercy for not producing him.

All were in mercy.

** To be in mercy was to be liable for a financial penalty, or amercement, to be paid to the King.

*** An assize was a meeting of vassals (free men with obligations to a lord) with the King, and the decrees issued afterwards.

September 1418 Geoffrey Attewey, a servant born on the Bishop's manor of Ashburton, received his manumission (freedom) on Sept 2nd, signed and sealed by the Dean and Chapter on the 3rd.

In 1970 nos. 21-47 North Street (odd numbers only) were demolished - the area is now Cleder Place. Archaeologists examined the houses before demolition, and discovered that most were late 18th century or early 19th century. However nos. 27-29, 33 and 35 were found to be medieval. No. 35 had had sixteenth and seventeenth alterations, which left only traces of the original layout; in addition the roof had fallen in.
Only part of the roof of no. 33 survived, and the front of no.27 was collapsing.
It seemed likely that the later properties in the street replaced earlier ones that had similarly disintegrated - a 1783 lease held at the time by Ashburton Urban District Council described no. 37 as 'the old walls and ruins of a dwelling house or cottage.'
Only no.33 had kept almost all of its original medieval layout. It seemed to have been originally a single storey building; an upper storey had been added in stages during the late medieval and early post-medieval period. Two wings had been added to the rear of the property, and there was a separate building at the end of the garden.
The front of no. 33 was basically stone, with the upper storey constructed of cob, built in layers nine to ten inches thick, with straw in between. Because the building was unsafe it was not possible to investigate whether or not the stonework was original.
The roof structure, thought to be 15th century, suggested that the building originally consisted of a hall about 18 feet long and a room 12 feet 6 inches long.
At some stage part of the building became a kitchen, with a 5ft 9in fireplace with a granite lintel supported by granite corbels.
'By the nineteenth century the hall had become a shop with a display window on to the street; the kitchen was now a bakehouse with an oven in the fireplace.
The first floor room of one of the rear wings 'had clearly been designed as a best bedroom'; it had a granite fireplace, and also a garderobe*.
The other wing had possibly been a storage area - it had stone walls up to 1ft 8ins thick on the ground storey, but nineteenth century slate hung walls above.
The detached building was dated as probably 17th century. It had a 4ft wide fireplace on the ground floor with a granite lintel, and also had a smaller fireplace, with a wooden lintel, in the upper storey.
Nos. 27 and 29 had originally been one property, which was 15 feet longer than no.33. No. 29 had been renovated in the early nineteenth century, but more of the earlier structure remained in no. 27. As with no. 33, it had originally been single storey, with an upper floor added in stages in the post-medieval period. A long rear wing was dated as probably being early 16th century.
The ground storey of both 27 and 29 was basically of stone, with the upper storey of cob. The remains of the rear wing were of stone.
The archaeologists concluded that the building was a medieval hall, divided by a screen, in what was later no. 27, to form a separate room, sometime in the late 15th century or early 16th century. This screen was 6ft 3ins high, leaving a gap of 1ft 4ins to the hall ceiling - this gap was filled with studwork, lath and plaster at a later date (late 17th century was suggested). A second screen was added later.
A 5ft 5in fireplace was in the centre of the rear wall of the hall. It had a seven inch thick granite lintel suppoted by granite corbels. A winding stone staircase was by the side of the fireplace, with later wooden treads.
Two other fireplaces were in the building, one upstairs and one downstairs - both had wooden lintels.
The rear wing was thought to have been 20ft 6ins long, with a 17ft 6in extension down to the river.
Laithwaite notes that two doorways had their jambs ' hollowed out half-way up to allow some bulky object to pass through; the rear doorway of the front range being already 4ft 1in wide and that to the wing 3ft 4ins. Pack horses have been suggested'.
Laithwaite concluded that the houses he examined were of 'relatively high quality'. He speculated that they may have been connected with the cloth industry, the occupants using the river Yeo (now Ashburn) at the bottom of the gardens. The wall at the bottom of nos. 27 and 29 had a wide opening onto the river, later filled up with blocks. Cob was used for much of the earlier building, but later stone and timber supplanted its use.
*Privy? The word does have other meanings.
Michael Laithwaite, Two Medieval Houses in Ashburton, Devon Archaeological Society Proceedings no. 29, 1971, p181ff 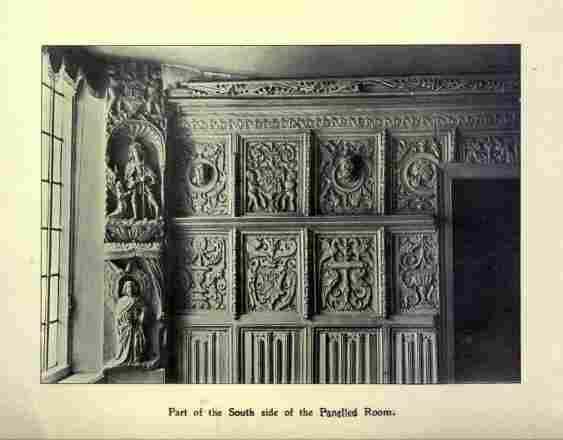 In the early 1900s P F S Amery wrote an article in Devon Notes and Queries about some oak panels from the 1500s, which were in a house belonging to one branch of the Prideaux family in Ashburton.
According to Amery the house passed down to the Parham family and then to a Mrs Cruse, finally being sold in 1905 after the death of her husband.
These panels had recently been removed from the house, and were now out of the county. It had been thought that the panels originated in St Andrew's Church, and had been taken out at the Reformation, although there was some dispute about this.
The panels were in a small back room in a house in West Street, very close to the parish church. The back buildings and stable were accessible from the left of the church gates; there was also a footpath under and archway that led to the same buildings. The old walled garden formed a boundary to the churchyard on the eastern end of the church.
The wainscoted room was about 14 feet square and about 8 feet high, with a canopy on the western wall. 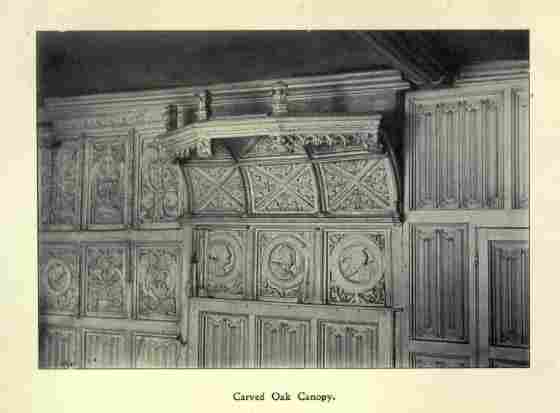 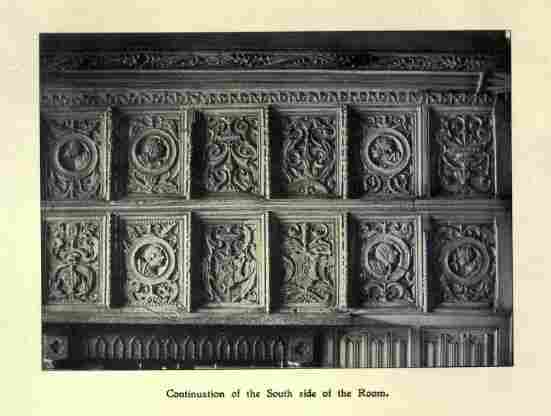 'Inconsiderable vestiges of a chapel, which belonged to the abbot of Buckfastleigh, are still discernible in the walls of a house occupied by Mr. Parham.'

'W.P.S.' writing in the Exeter Flying Post in 1851, says that it is erroneous to think that the house belonged to the abbot of Buckfastleigh.

The 1891 census shows an Edward and Elizabeth Cruse living in West Street. Edward is 70 and living on his own means; Elizabeth is 71.

Edward Cruse died in June 1905 and was laid to rest in the Parham vault.

In August 1905 Sawdye and Son sold a large amount of antique furniture, paintings and china from Paradise House in West Street, on the instructions of the representatives of the late E Cruse. The panelling is not mentioned. 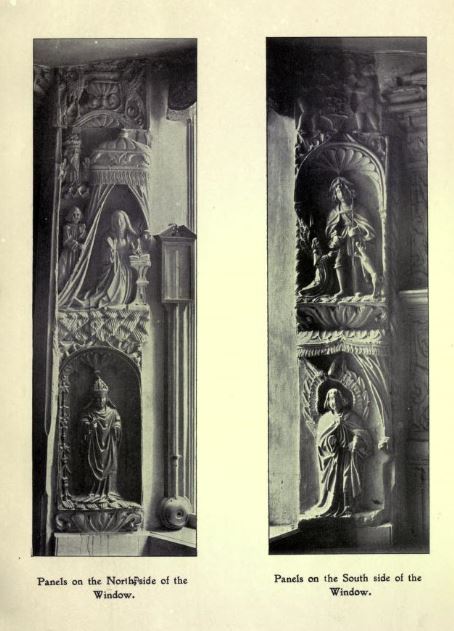 *******
In 1585 Queen Elizabeth restored to the vicars choral* of Exeter Cathedral various lands. These included a close at Stonehill, within the borough of Ashburton.
The History of Exeter, George Oliver, Exeter, 1821,p86ff
*Described in a paper by Peter Hampson as 'choristers and property dealers' https://humanities.exeter.ac.uk/media/universityofexeter/collegeofhumanities/history/exhistoria/volume4/Hampson-Vicars_Choral.pdf - Accessed 06-10-2016

Taken from the Subsidy Rolls and described in a paper read by J S Amery in 1896, these names come from an assessment of people's land and goods,on which they had to pay an amount of money. The paper was published in the Transactions of the Devonshire Association, and is available freely through https://archive.org/. The forenames towards the end of the list are only partially visible in the scanned documents.
Thomas Fforde gen

1590 Gift and bond from Christopher Lange of Ashburton, glover to John Blundell of Ashburton, merchant March 26th, for a close of land, consideration £11.

1600 Bargain and sale from Christopher Lange  of Ashburton, glover to George Crust of Ashburton June 25th.

1633 Lease for lives from Sir William Strode of Newnham to William Avoke of Ashburton, yeoman May 2 For close in Asburton, consideration £40

1639 Bargain and sale from Sir Richard Strode of Newingham to Thomas Cruse of Ashburton, gent for close in Ashburton consideration £37

Whereabouts of the above documents are unknown. Reference accessed through https://www.google.com - 23-02-2015

Residents in Ashburton 1599
Rate for the relieffe of the power.

'The XXII day of January 1612 These persons followinge for absentyne themselves from the Church on that Sabbath daye all the tyme of divine service have payd each of them XIId a piece as followeth toward the Reliefe of the Poore
John Ball   William Ffurse   Henry Paddon   John Hall'
Edward Windeatt, Early Nonconformity in Ashburton, Transactions of the Devonshire Association vol. 28,1896, p229