The whole website can be searched from the Home Page

Miscellaneous Documents and mentions of people

See the Virtual Museum 1780s for a lease on a house in East Street, owned by the Earl of Oxford with William Fabyan as tenant.
Kings Lane or Kingsbridge Lane

'This indenture made the 20th day of August one thousand eight hundred and twenty five between John Gifford Croker of Boveytracey in the county of Devon surgeon of the one part and Peter Fabyan Sparke of
Ashburton in the said county sergemaker of the other part whereas the said John Gifford Croker... hath contracted with the said Peter Fabyan Sparke for the sale thereof to him...for the term of two thousand years under and subject to the payment of the clear yearly rent of two pounds and five shillings...for the price or sum of one hundred and twenty pounds...all that messuage, tenement or dwellinghouse with the courtlage and garden thereto belonging situate and being at or in Kings Lane otherwise Kingsbridge Lane within the town and borough of Ashburton aforesaid and now in the occupation of Henry Kingwill as tenant thereof...and bounded by the said lane or street on the east and by the lands of the said Peter Fabyan Sparke on the north...' 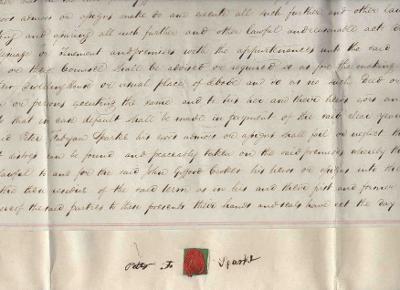 Above: Peter Fabyan Sparke's signature and seal.
From my own collection
*******
Lydia Pope's property 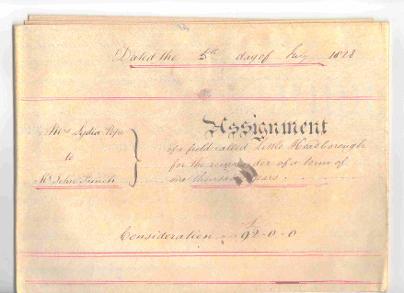 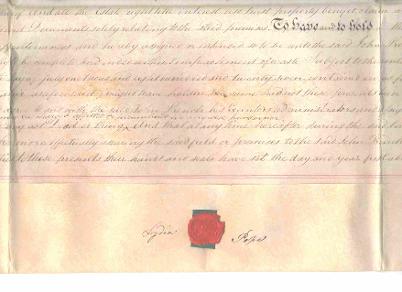 Above and above right:  An indenture dated the 5th July 1828...'Between Lydia Pope of Ashburton in the County of Devon, administratrix of the estate and the effects of William Pope late of Ashburton aforesaid, deceased, of the one part and John French of Dolbeare within the parish of Ashburton aforesaid, yeoman of the other part. Whereas in and by certain indenture or demise dated the 28th day of July one thousand eight hundred and twenty seven made between the Right Honourable Robert Cotton Saint John Baron Clinton of the one part and the said William Pope of the other part....it is witnessed that for the valuable consideration as therein mentioned the said Lord Clinton did grant bargain sell and demise to the said William Pope....the premises hereinafter described....to hold the same unto the said William Pope his executors administrators and assigns for the term of one thousand years subject nevertheless to the payment of the annual Borough rent of ten pence and the yearly rent of one shilling to the said Lord Clinton.....Whereas the said William Pope died on or about the first day of May one thousand eight hundred and twenty eight intestate and letters of administration to his estate and effects were granted by the Court of the Dean and Chapter of Exeter on or about the twenty first day of June one thousand eight hundred and twenty eight to the said Lydia Pope his widow and whereas it has been found necessary in order to discharge the debts of the said William Pope deceased to sell and dispose of (inter alia) the premises hereinafter mentioned and whereas at a public auction holden for the sale of the field hereinafter mentioned and other property the said John French was the best bidder and became the purchaser thereof at the sum of ninety two pounds...She the said Lydia Pope hath bargained sold and assigned...unto the said John French...all that field or close of land hereditaments and premises....called or commonly known by the name of Little Headborough...containing by estimation three roods* or thereabouts, the same more or less in the occupation of Samuel King as tenant thereof...

* A rood is approximately a quarter of an acre

In the 1851 census she is a widow living at Belford Mills with her son William Henry Pope, a miller. http://search.findmypast.co.uk/

On March 24th 1874 Mrs. Lydia Pope died, aged 77. She was the only surviving daughter of the late Thomas Smerdon.

Messrs Charles and John Webb to Mr Peter F Sparke, in trust for Mr W F Windeatt and Miss Frances Windeatt
Conveyance in fee of lands in the parish of Ashburton, Devon
'This indenture made the twenty third day of February one thousand eight hundred and thirty seven, between Charles Webb and John Webb of Sambrook Court in the city of London merchants of the first part William Fabyan Windeatt of Totnes in the County of Devon gentleman and Frances Windeatt of the same place spinster of the second part and Peter Fabyan Sparke of Ashburton in the said County of Devon gentleman of the third part whereas by indentures of lease and release [   ] date respectively on or about the twelfth and thirteenth day of April one thousand eight hundred and thirty the release made or expressed to be 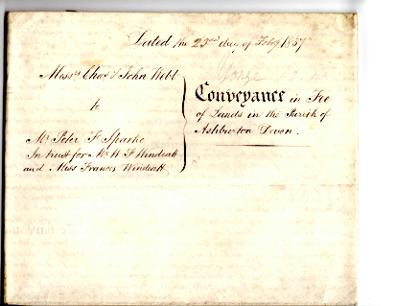 made between Molly Berry therein described of the first part the said Charles Webb and William Searle Benkell therein described of the second part John Berry therein also described of the third part Charles Brooke and the said Charles Webb and John Webb therein described as of Sambrook court in the said city of London merchants and [?] of the fourth part and Edward Archer Wilde therein also described of the fifth part After reciting as therein is recited all those pieces or parcels of land called Broom Park Boy Park the Ley formerly called Higher Rew Ley and the four fields formerly part of Rew Down Common and then divided into several indentures called Vale Park Loam (?) Park and the four closes then two fields...to the use of the said Molly Berry and her assigns for the term of her natural life... in restoration and confirmation of the estate for her life limited to her and her assigns in the same premises in and by certain indentures of the fourth and fifth days of March one thousand seven hundred and ninety three and from and immediately after the decease of the said Molly Berry ...to the use of the said Charles Brooke Charles Webb and John Webb...upon trust to sell the same and to stand possessed of the monies to arise thereby...
Whereas the said Molly Berry departed this life on or about the [blank] day of [blank] one thousand eight hundred and thirty and whereas the said Charles Brooke departed this life on or about the twenty second day of May one thousand eight hundred and thirty three whereby the said Charles Webb and John Webb became soley seised of the said hereditaments and premises and whereas the said William Fabyan Windeatt and Frances Windeatt have contracted and agreed...for the absolute purchase of the said fields or parcels of land...for the price or sum or eight hundred and eighty pounds...

In 1838 John Sparke Amery married Frances Windeatt in the Totnes registration district.
In the 1841 census they are living at Druid, and John describes himself as a sergemaker. They have a one year old son, Peter.
http://www.freebmd.org.uk
1841 census HO107 piece no 253, folio 6 p6
*******
Miss Halse's house 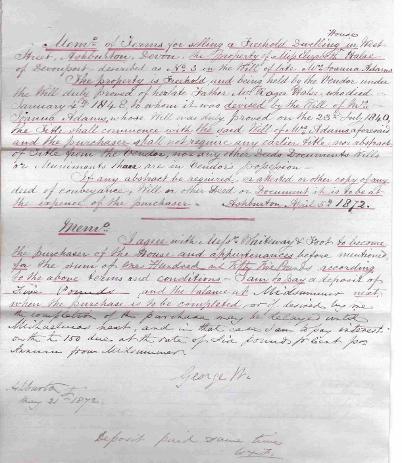 Above: Conditions for sale of Miss Halse's House

See http://www.glanvillenet.info/will014.htm for the will of Mrs Joanna Adams. Roger Halse is described as a cousin.

Left: 'Mem of terms for selling a freehold dwelling house in West Street, Ashburton, Devon, the property of Miss Elizabeth Halse of Devonport, described as No. 3 in the will of late Mrs Joanna Adams.

The property is freehold and being held by the vendor under the will duly proved of her late father Mr Roger Halse, who died January 4th 1848, to whom it was devised by the will of Mrs Joanna Adams, whose will was duly proved on 23rd July 1840, the title shall commence with the said will of Mrs Adams aforesaid, and the purchaser shall not require any earlier title nor abstract of title from the vendor, nor any other deeds documents wills or muniments than (?) are in vendor's possession.

If any abstract be required, or attested or other copy of any deed of conveyance, will or other deed or document it is to be at the expence of the purchaser - Ashburton April 5th, 1872

Mem I agree with Messrs Whiteway & Foot to become the purchaser of the house and appurtenances before mentioned for the sum of one hundred and fifty five pounds, according to the above terms and conditions - I am to pay a deposit of five pounds and the balance at Midsummer next, when the purchase is to be completed, or if desired by me the completion of the purchase may be delayed until Michaelmas next, and in that case I am to pay interest on the £150 due at the rate of six pounds per cent per annum from Midsummer. George W

A document dated 1890 is an 'Abstract of the Title of Edward Herbert Bayldon Esq. and Annie his wife and their trustees to certain Freehold Land in the parish of Ashburton in the County of Devon.'

The property concerned was 'all that capital messuage farm and lands called Rew otherwise Ray in the parish of Ashburton in the County of Devon to hold unto and to the use of the said Edward Herbert Bayldon in fee simple and also all that field called the "Claw" otherwise "Ireland's Claw" in the said parish of Ashburton to hold unto the said Edward Herbert Bayldon for the residue of the term of one thousand years therein created in or about the year 1704.'

The document is a complicated one, involving a large number of people. I am not aware of any of them having any other connections with Ashburton.

The Reverend William Bewes Bennett
of the second part

The Reverend Jacob Ley the Younger
of the third part

'It appeared that...the indenture of the 13th March 1854 was never executed...the said James Edmond Yonge was the only son and heir of the said Edmund Yonge and Jane Ley his wife.'

'Ultimately by the will of the said James Ley Yonge...the said James Edmond Yonge became entitled to the beneficial interests in one undivided moiety of...the lands thereinafter mentioned...

...and reciting the will of the said William Bewes Bennett...Sarah Ann Cresswell (then the said Sarah Ann Bennett spinster) became entitled to the beneficial interest in the other undivided moiety of...the lands thereinafter mentioned...'

1861
The Reverend Sackville George Cresswell
of the first part

James Mayne
of the third part

Sarah Ann Bennett appointed James Mayne to be a trustee of the Indenture of Settlement in place of Richard Preston Bishop.

Agreement by James Edward Yonge, Cecil Edward Bewes and James Mayne with Edward Herbert Bayldon for sale to him of the fee simple of the lands thereinafter mentioned 'as being conveyed for the residue of a certain term of 1000 years for the sum of £3500. 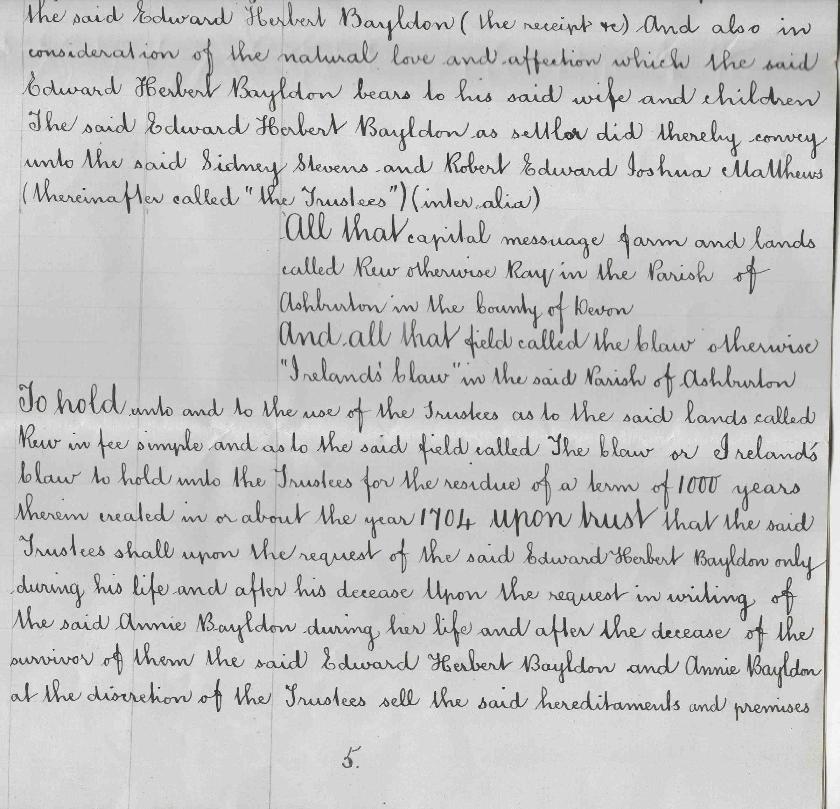 Above: Section of a document dealing with Rew and a field called Claw or Ireland's Claw.
From my own collection

1884
Edward Herbert Bayldon of 20 Addison Road Kensington in the County of Middlesex, gentleman
of the first part

Annie Bayldon his wife
of the second part

Edward Stentiford emigrated from Ashburton in 1830. He settled in St. Andrews and was 'engaged in the carriage trade.'
Planters, paupers and pioneers: English settlers in Atlantic Canada, Lucille H. Campey, 2010, p128

Mr and Mrs Hatch's notes on the cross at 14 St Lawrence Lane have now moved to Crosses and Holy Wells, a sub-menu of Churches and Memorials.