The Milton family
43 year old William Milton and his wife Elizabeth were living in St George, Hanover Square, Middlesex, at the time of the 1871 census. With them are their children: William, 14, born in Barnstaple; Elizabeth, 11; Joseph, 7; Maria J, 5 and Emily, 1. All the younger children were born in Portsmouth, Hampshire, whilst William (snr), a mariner, was born in Exeter, Devon.
1871 census RG10, piece no. 119, folio 70, p28
When Emily Milton's birth was registered in the December quarter of 1869, in Portsea Island registration district, her mother's surname was given as Jeffrey.
Jeffery was given as the mother's surname when William Milton's birth was registered in the June quarter of 1857, in the Barnstaple Union registration district.
There had been an earlier Milton birth registered with the mother's surname as Jeffery: Thirza Milton's birth was registered in the June quarter of 1854, in the Medway registration district.
https://www.gro.gov.uk
William Milton (jnr), the son of William and Elizabeth, was living at 20, Chapel Street New Cottages, Buckfastleigh, in 1881. Born in Barnstaple, he was a labourer in a woollen factory.
1881 census RG11, piece no 2177, folio 45, p38
This is probably the William Milton who married Ellen Coleman in the Newton Abbot registration district in the December quarter of 1882.
The only problem is that on the 1881 census above William (jnr) was said to be already married, although no wife was with him on the census.
https://www.freebmd.org.uk
Ellen was probably the Ellen Coleman, 7 year old daughter of Henry and Harriet, who was living with her parents in Kingsbridge Lane, Ashburton, in 1871. Ellen had 5 siblings at that time, one of whom was called Jessie.
The family was still in Kingsbridge Lane in 1881, when Ellen was a wool sorter.
1871 census RG10, piece no. 2080, folio 56, p23
1881 census RG11, piece no. 2161, folio 53, p21
See also the Coleman family, under Individual families
William Henry Milton's birth was registered in Newton Abbot registration district in the March quarter of 1883. His mother's maiden surname was Coleman.
He was baptised in Ashburton in April of that year.
https://www.gro.gov.uk/gro/content/certificates/indexes_search.asp
Parish records
Jessie Milton, the daughter of William and Ellen, was born on the 24th May 1889. William was a general labourer, and the family lived in Kingsbridge Lane.

Above: Jessie Milton's birth certificate.
Many thanks to Charles Brain
Jessie was baptised in Ashburton on September 4th, with her father's occupation as factory hand in the parish record.
Parish records
Samuel Milton's birth was registered in the Totnes registration district in the September quarter of 1890. His mother's maiden surname was Coleman.
https://www.gro.gov.uk/gro/content/certificates/indexes_search.asp
Although living in Buckfastleigh, when Samuel was baptised in November of 1890 it was in Ashburton.
Parish records
By 1891 the family - 32 year old William, Ellen, 27, and children William H, Samuel and Jessie, were living in Fowler(s) Court, Fore Street, Buckfastleigh. William said he was born in Pilton, Devon*.
1891 census RG12, piece no 1712, folio 37, p26
*Pilton is about a quarter of a mile north of Barnstaple town centre, and is now a suburb.
https://en.wikipedia.org/wiki/Pilton,_Devon
In the 1901 census William and Ellen were living in Kingsbridge Lane, Ashburton, with their 11 year old daughter Jessie, and 10 year old son Samuel. Samuel had been born in Buckfastleigh; William's occupation was general labourer and carman.
1901 census RG13, piece no.2053, folio 23, p11
Lilian Kathleen Milton was baptized in 1902 ( a note in the record says she was born on October 17th), the daughter of William and Ellen Milton of Kingsbridge Lane.
Francis John Tilbury was baptized in September 1905 (born July 19th).
Parish records 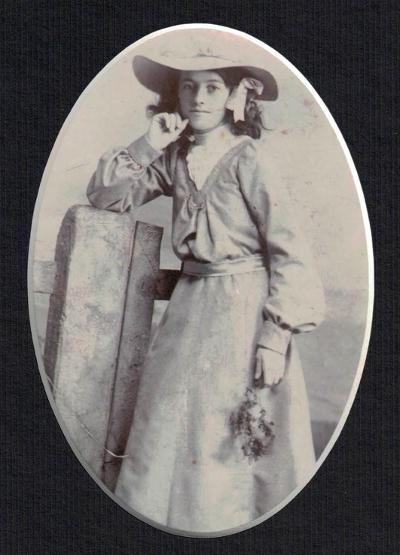 Left: Jessie Milton.
'My grandmother in the outfit when she was about to go off to London to take a job to be “in service”.  However, around that time my great grandfather, William Milton decided to emigrate to the woolen mills in Lawrence, Mass.'
Below: 'The family portrait is of the Milton family shortly after they had settled in the US, having moved from Ashburton. So, it’s probably 1908.  It’s the entire family, except for the oldest son who was old enough to make his own decision: he stayed in England.  The older woman is Ellen Coleman, my great grandmother, who was born in Ashburton, probably on Kingsbridge Lane in 1865.  My grandmother, Jessie, is at the top right and you’ll also see from the birth certificate that she, too, was born on Kingsbridge Lane.'
Many thanks to Charles Brain for the information and photographs 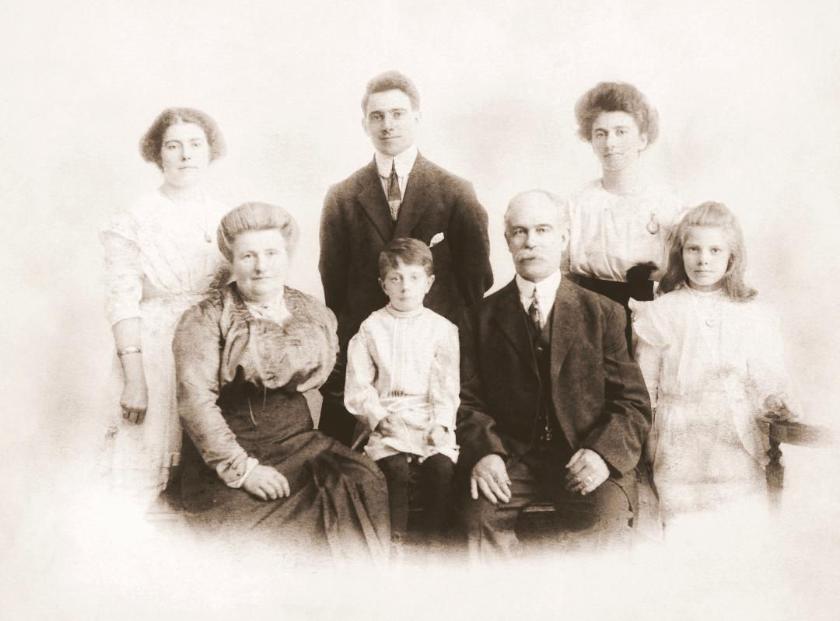 In 1906 William, Ellen, Jessie and Samuel emigrated to Lawrence, Massachusetts.
Many thanks to Charles Brain, the grandson of Jessie Milton, for this information
Right: 'This platter is the last piece of great grandmother Ellen Milton's china that came over on the boat with her. It's called Clematis, by Wedgwood'
Many thanks to Betsy Brien for the photograph and information.
Their eldest son stayed behind, and might have been the William H Milton, fish dealer, living in Brixham at the time of the 1911 census. The 28 year old had been married to Minnie M for ten years, and the couple had 5 children: Louisa, Jessie, Blanche, Alice and Nellie. William had been born in Ashburton.
A William Henry Milton had married Minnie Maud Giles in 1900 in Brixham, but said his father was also William Henry Milton, a coal merchant. Both William and Minnie said they were 20 years old.
In the census of the following year William's age had reduced to 19, and Minnie (Maud on the census) was still 20. 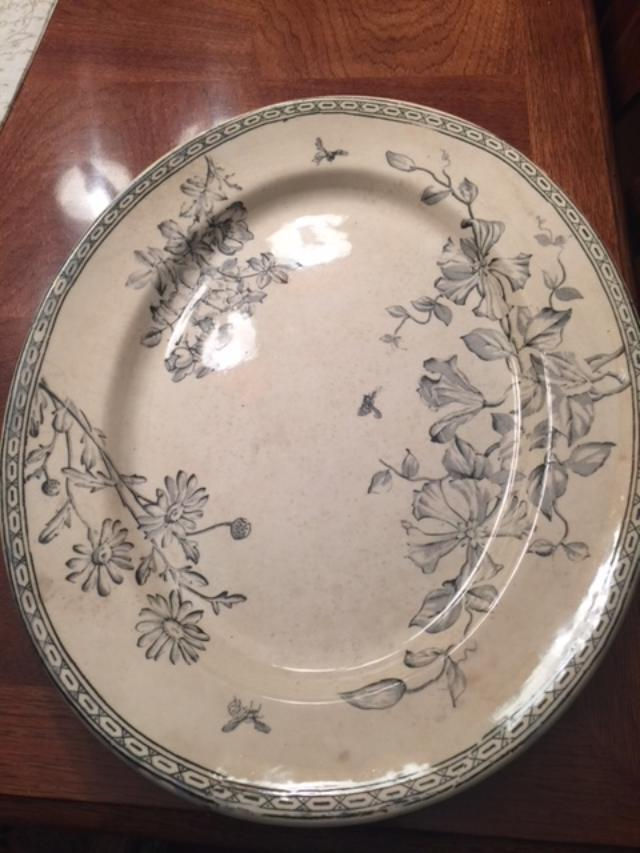 1911 census RG14, Totnes registration district, piece no 12803
Brixham parish records
1901 census RG13, piece no 2066, folio 25, p7
The 1920 Lawrence MA census has William and Ellen Milton together with a daughter Lillian, 17, and a son, Francis, aged 14. All emigrated in 1906.
William Milton died in 1924, and is buried in Walnut Grove Cemetery, Methuen, Essex County, Massachusetts. His wife Ellen, who died in 1948, is buried in the same cemetery, as is their daughter, Lillian K Stocks, who died in 1986.
The name Milton is inserted on Lillian's memorial stone.
https://www.findagrave.com/memorial/208741690/william-milton
Many thanks to Lynn Rowinsky for passing on this information.
See the Virtual museum 1960s for a pair of souvenir 'Ashburton' salt and pepper shakers belonging to the Milton family