People and Properties 1700s
'A century ago Newton was a smaller place than Ashburton, and Torquay smaller still...'
Small talk at Wreyland, Cecil Torr, Cambridge, 1932, p51 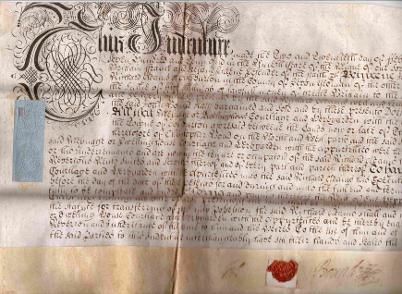 Above: This is an indenture, (from my own collection), made on February 22nd 1710, concerning a property in East St. It is between John Bound of London, gentleman and Richard Adams of Ashburton in the County of Devon yeoman. In consideration of the sum of five shillings of lawful money  John Bound has sold* 'all the messuage or dwelling house, courtelage and herb garden with the appurtenances'.

The property is between the lands of Thomas Ford Esq. on the east part, the lands of Christopher Bond on the north and west parts and the 'said street called the East Street on the south part'. The property had been in the occupation of one John Hurst or his under tenants, and at the time of this indenture was occupied by Richard Adams, his under tenants or assigns. Richard Adams is to have the property for one whole year, and is to pay 'the rent of one peppercorn on the feast  day of the Birth of our Lord Christ'. My reading of it is that these conditions will continue 'forever'.

* From the later conditions, this appears to be leasehold. A ground rent had to be set so that the terms of a lease could be enforced, but sometimes these were tiny amounts. A peppercorn (ie the same thing that is put in pepper grinders) or other token was sometimes set as the rent, to save the freeholder having to collect the money.

*******
'Ashburton 3rd 7ber 1712
or
Sirs, May it please yr Honrs
We humbly take leave to trouble you in behalf of ye Widdow Spreat, in opposition to those that seeke so earnestly to displace her from Yor Honrs Service and all we have to say in adition to what you have already been informed is that whereas it is given out that the person that endeavours her discharge has been a great Sufferer in promoting the interest of the party he is of. We doe assure yr Honrs that we believe it to be truth and Mrs Spreat dos averr it to be so, that her late husband brought himself & family to ruin by his being so zealous and indefatigable in advancing ye interest of the very same party, And we further prsume to add that we do not appear for the Widdow for any personal ill Will we bear to him that opposed her, But out of pure Charity to a poor Woman & three helpless Children who will be destitute of all meanes of Support if your Honours should dismiss her your Service, Wheras her p sent apponent wants it not, having a good livelihood from his present calling & business. We beg y honrs pardon & presume to subscribe ourselves.
May it please Yr honrs
Yor most obedt humble Servts
[signed] Ben: Alexander, Geo: ffabyan, Giles Risdon, Moses Tozer, George Cockings, Jno: Eales Jnr, Jno. Sowter, Barth: Eales, John Eales Sen, William Atwill, Samll Eales, Sol. Tozer Junr, Merttms Sowter, Thomas Carlile, John Bastard, Vicar, Walter Palk, Portreeve, Sam: Tozer, Constable, Alex: Lightfoot, Churchwarden, Thomas Lee, Richd Muttis.
Endorsed.
To the Honble Sr Thomas Frankland & John Evelyn Esqr, Her Maties Com for executing ye the Office of postmr Generall at their office. London. H. Tapley-Soper.'
Document added to the MSS department of Exeter City Library, transcribed in Devon and Cornwall Notes and Queries vol 11, January 1920-October 1921, Exeter 1921, p30
Widow Spreat may have been the wife of Gabrill Spreat, buried on the 14th September, although the petition is dated the 3rd September*
Parish records
* At this date the year began at the end of March, making September the 7th month,
https://familysearch.org/wiki/en/Abbreviations_Found_in_Genealogy_Records#Dates

'To be sold, either entire or separate, the fee-simple and inheritance of the several messuages, lands and tenements of Nicholas Prideaux, gentleman, situate within the borough of Ashburton, in the county of Devon, consisting of at least seventeen different freeholds, several of which tenements are in hand, and now worth yearly to be at forty pounds and upwards, and others at lease, determinable on one, two and three lives, under the reserved rents of ten pounds, six shillings and four pence. For which purpose a survey will be held at Mr Aldridge's, at the New Inn in Ashburton aforesaid, on Monday 16th day of January 1756...'
The General Evening Post 1756, p348

'Gentlemen' from the Universal British Directory of Trade, Commerce and Manufacture, Vol 2, late 1700s. For other entries see clergy on the Churches and Memorials page, and trades and professions on the Banks and Business page.

1756 'To be sold, either entire or separate, the fee simple and inheritance of the several messuages, lands and tenements of Nicholas Prideaux, gentleman, situate within the Borough of Ashburton, in the county of Devon, consisting of at least seventeen distinct (?) freeholds, several of which tenements are to hand, and now worth yearly to be at (?) forty pounds and upwards, and others at lease, terminable on one, two and three lives, under the referred rents of ten pounds six shillings and four pence. For which purpose a survey will be held at Mr Aldridge's, at the New Inn in Ashburton aforesaid, on Monday 26th day of January 1756.'
The General Evening Post 6-8 January 1756, p45 col1 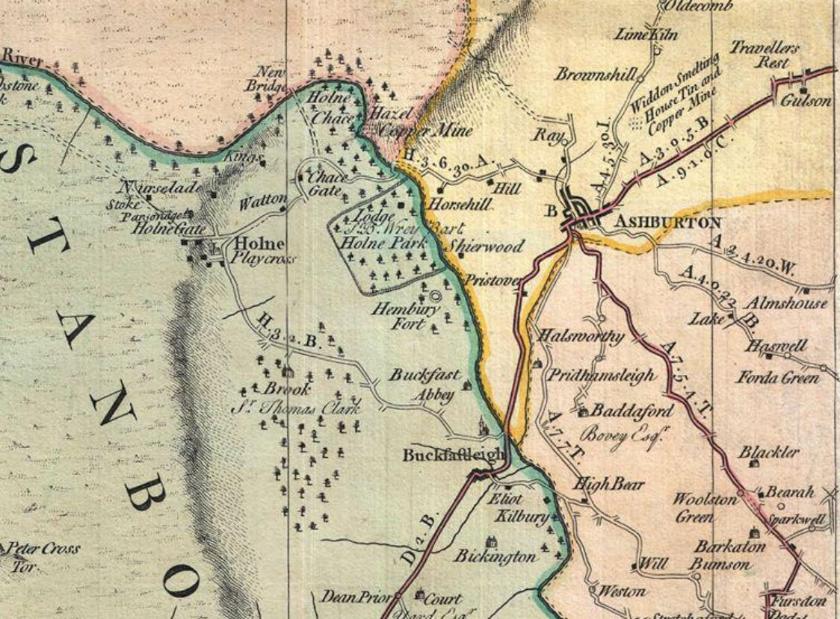 Above and below: Benjamin Donn's map of 1765
By http://www.geographicus.com/mm5/cartographers/donn.txt [Public domain], via Wikimedia Commons
The following are in the Devon Heritage Centre (formerly the Devon Record Office), filed under Chudleigh Parish ref 30009A-99
For more details go to http://www.nationalarchives.gov.uk/a2a/

Certificates of Settlement in Ashburton.

David Cloak of Ashburton, woolcomber, Jane his wife and Joan their daughter  1710

Samuel Caunter, Joan his wife and Mary their daughter  1727

William May and Elizabeth his wife  1740

William Hoppings and Sarah his wife  1769 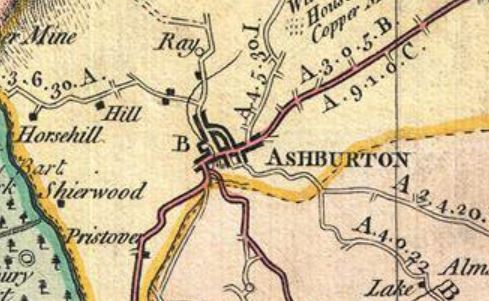 *******
Ashburton subscribers to Moor's Indian Charity School.
In 1754 Eleazar Wheelock set up a school in Lebanon, Connecticut, for native Americans. Named after its chief benefactor, Joshua Moor, the aim of the school was to teach native Americans about Christianity; they could then convert their own communities. An enormously successful fund raising mission was sent to Great Britain in 1765.
http://nativeamericannetroots.net/diary/840 - Accessed 22-06-2015
http://www.encyclopedia.com/doc/1G2-2536600525.html - Accessed 22-06-2015

A Continuation of the Narrative of the Indian Charity School, in Lebanon, in Connecticut, in New England, Oliver, London, 1769, p91