I have added numbers to the various Walter Palks in this account. The first Walter names his 'cousin' Walter [2], son of Thomas Palke deceased, in his will.

From Charles Worthy's 'Devon Parishes': 'Walter Palke was buried at Ashburton in 1679, and he is the first I find mentioned in connection with this parish. He appears to have had a brother Thomas and a sister Dionysia, who married Townsend, to her he leaves £10 by his will, dated 5th November 1677, and proved in the Peculiar Court of the Dean and Chapter of Exeter, 19th December 1679, and of which the following is an extract.
5th November, 1677 - Walter Palke of the towne of Ashburton, yeoman. To my sister Dionis Townsend, £10, and her life in all my lands lying in Ashburton, after the death of my wife Agnes. To my cousin Margaret, daughter of Dionis Townsend, Joan and John Townsend, £10 to the first and 50s each to the two last.
To my cousin Walter, the son of Thomas Palke, deceased, reversion of the lands aforesaid, charged with 20s a year to my cousin Dionis; residue to Agnes my wife, who is sole executrix. Witnesses: Thomas Palke, Agnes, William and Mary Hannaford. Proved 19th December, 1679.
The inventory of the effects of the deceased, mentions inter aliis the value of his wearing apparel, £1; money in his purse, 13s 6d; one pair of looms, 10s; ten pewter dishes, 16s. The total of the personal effects amounted to £65 7s 6d...'
Devonshire Parishes, Charles Worthy, vol 2, Exeter and London 1889, p326ff

Walter Palke [2], son of Thomas Palke deceased. 'The will of this Walter is dated February 22nd, 1705; he describes himself as Walter Palk senr. of Ashburton, and leaves to Walter "Paulk my eldest son, all my lands after the decease of his mother", charged with the following payments, £40 to Jonathan my second son, £30 to Thomas my third son, £30 to Grace Palke my daughter. Residue to Grace my wife who is sole executrix. Witnesses: John Smerdon, John Furseman, Robert Jerman. Proved, Peculiar Court, Dean and Chapter, Exeter, 22nd May, 1707. Personal estate £160 10s 5½d.
The maiden name of his wife was Ryder, and in her right he acquired a small farm, called Lower Headborough, close to Ashburton. Her eldest son Walter [3], is described as of Headborough. He married Frances, fifth daughter of Robert Abraham, yeoman, of Gurrington, in the adjoining parish of Woodland...'
Devonshire Parishes, Charles Worthy, vol 2, Exeter and London 1889, p326ff

Walter Palk [4] born 1714 had a son Jonathan who became Vicar of Ilsington, and wrote*, ' "My father [Walter Palk 4] was a little farmer with a large family; for him my uncle bought an estate which enabled him to live a credit to his brother and respected by his neighbours...He was of Headborough and Yolland Hill, the latter property being also in Ashburton parish...He married when twenty years of age at St Martin's Church, Exeter, Thomasine Withecombe of Priestaford, another farm close to Ashburton, and in his marriage licence he is described as of "Ashburton, clothier"...He married secondly, Mary Mugford, who died in May, 1793, he himself surviving until 1801.
Devonshire Parishes, Charles Worthy, vol 2, Exeter and London 1889, p326ff

Settlement of lands at Widecombe in the Moor, dated 1801, names Thomas Palk of the City of Bath, one of the sons of Walter Palk late of Ashburton, decd. and Walter Palk of Marley House, together with William Fabyan of Ashburton, sergemaker; James Mogridge of Ashburton, surgeon; and David Bristow Baker of Newtington Butts, Surrey.
http://discovery.nationalarchives.gov.uk ref 74/9/9/15a-b

'[Walter Palk 4] had four sons, who all owed their success in life to their uncle's care and liberality, and two daughters, viz., Frances, who married William Fabyan of Ashburton, and Grace, who was the wife of James Mogridge. His eldest son, Walter Palk [5], was born in 1742. In his [Walter 5] marriage licence, dated 15th February 1782, he is described as of "Ashburton, Serge Maker." He represented Ashburton in Parliament from 1802 to 1807, died 19th February, 1819, and was buried 2nd of the following March, at Rattery...'
Devonshire Parishes, Charles Worthy, vol 2, Exeter and London 1889, p326ff

'The second son [of Walter 4], Robert Palk, born 1744, died on his way home from India...
The third Thomas Palk of Butterford, returned from India in 1788, when one of his native Indian servants was burnt to death at Ashburton. A full account of the accident was given in Trewman's Flying Post, 27th November of that year...
The fourth son, Jonathan Palk...was born 1761, and was baptised, according to a private N.C. Register kept by My Peter Fabyan of Newton Abbot, November 9th in that year. His mother was Mary Mugford, his father's second wife. He was instituted to the Vicarage of Ilsington, near Ashburton, 1787, and died 1828.'

Robert Palk born 1717. 'Robert Palk, second son of Walter Palk [3] of Headborough, in the parish of Ashburton, and Frances Abraham, his wife, was baptized at the old Meeting House at Ashburton, 10th December, 1717...He was sent to the ancient Grammar School of his native town, and educated by the Rev. John Bayly, whose Episcopal licence, as Head Master there, is dated 13th January, 1728...Upon leaving the Grammar School he went to reside with a maternal uncle,a clergyman called Blatchford, who resided in Fowey in Cornwall. Ultimately another uncle, Mr Abraham of Gurrington, undertook the cost of sending him to Oxford...He was subsequently ordained Deacon, by Bishop Weston in Exeter Cathedral, and was afterwards for two years Curate of Egloskerry and Lanelly in Cornwall; he then went to India, as Chaplain on board the Stirling Castle, and during his clerical service in that country attracted the notice of General Lawrence, who in 1752 obtained an appointment for him as Paymaster and Commissary to the Army of which he had then assumed the command. But previously to this Mr. Palk had realized a considerable sum of money by judicious speculations, and he was now in a position which enabled him to save more; so that when he reached the age of forty he found that he had acquired a fortune...He came back to England for the first time in 1759, and in 1763, was appointed Governor of Madras. About this time he purchased Haldon house in the parish of Kenn, and on 7th December, 1767, was returned one of the Members of Parliament for his native town...Mr Palk retained his seat for Ashburton in successive Parliaments until 18th June, 1790, when his son Lawrence was elected in his stead.'
Ibid p330ff
*******
Robert Palk
Connection (if any) to the above Palk family unknown, but a descendant of Robert claims that 'the Robert Palk who married Mary Carrington was the great nephew of Sir Robert Palk of Haldon...Robert's grandfather, Walter Palk, was the brother of Sir Robert.'
https://www.genealogy.com/forum/surnames/topics/palk/17/
Another relative claims that Robert was the son of Robert Palk and an Indian woman.
https://www.funstuffforgenealogists.com/html/smerdon2.htm
The brother of Sir Robert was Walter Palk [4], 1714-1801. (see above). He had 4 sons, at least two of whom, Robert and Thomas, went to India at some stage. Robert, born 1744, allegedly died on the way home from India.
Devonshire Parishes, Charles Worthy, vol 2, Exeter and London 1889, p326ff
*It is not clear where the Rev Jonathan Palk's account finishes and Charles Worthy's resumes.
Robert was born circa 1781 (calculated from age at death). Some websites claim that he was born in Varanesi, Uttar Pradesh, India.
Robert and Ann Palk, natural son and daughter of the late Robert Palk Esq., 'A member of the Board of Trade', were baptized in Calcutta, Bengal, 2nd April 1784.
British India Office Births and Baptisms, available from www.findmypast.co.uk
Robert Palk Esq., of the parish of Ashburton, married Mary Carrington at Ide on the 29th April 1812. The marriage was by licence.
Ide parish records
Children baptised at Ashburton were:
Robert Palk, born in November 1813 and baptised the following October. His father's occupation is given as Magistrate.
Mary Palk, baptised in 1815. Her father's occupation is Justice of Peace
and Walter William Henry Palk, baptised in 1818
Parish records
In the 1841 census Robert and Mary are living at Lower Bowdley. Robert, whose profession is described as Independent, is 60, and Mary is 48. Robert was not born in the county.
1841 census HO107, piece no. 243, folio 7, p9
By this time Mary jnr. has married Thomas Smerdon, and Robert jun. has married Jane Smerdon. The Smerdons are brother and sister, both from Brownshill in the parish. The marriages took place in November 1838, apparently two days apart, although the witnesses are identical.
Parish records
The gravestone of Robert Palk and one of his children, in St Andrew's graveyard.
'Underneath are deposited the remains of Walter William Henry Palk son of Robert and Mary Palk. Aged two years and thirty eight days. He died June 21 1820.
To the memory of Robert Palk Esq, for many years a deputy lieutenant and magistrate of this county. He died the 19th of March 1848, aged 67.'
My own photograph 2019
Mary Palk died in June 1868, in Emerald Hill, Melbourne, Australia. She was described as the relict of the late Robert Palk Esq., JP, Ashburton, Devon, England.
The Argus, Melbourne, Victoria, 20 June 1868, p4
See below for why Mary was in Australia. 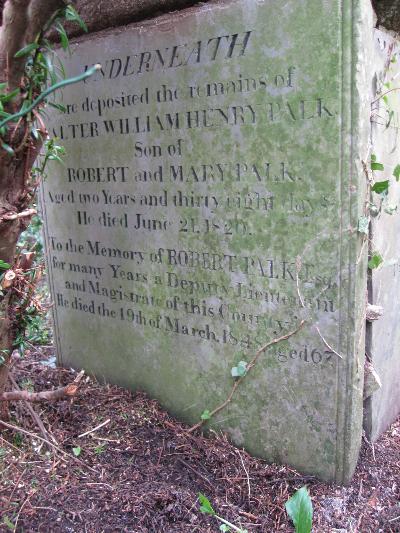 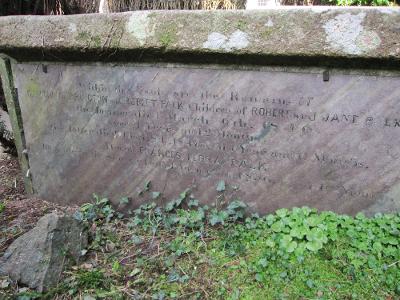 Left: Side of the tomb pictured above. 'Within this vault are the remains of Camilla Carrington and Robert Palk, children of Robert and Jane. The former died March 6th 1846 aged 4 years and 2 months. The latter died December 8th 1847 aged 1 year and 11 months. Also of Frances Flora Palk daughter of the above who died August 23rd 1850 aged 10 months.'
My own photograph 2019
According to the website History of homeopathy in Australia Robert and his family (including his widowed mother Mary) arrived in Melbourne, Australia, in 1852. He seems to have become a mineral surveyor, but by 1854 was calling himself 'Doctor'. In 1857 he was listed in Tanners Directory of Melbourne as Robert Palk MD (homeopathic), by which time the family were living in the Melbourne suburb of Emerald Hill.
Robert became very active in the community, being on various committees, in addition to being a magistrate and a JP.
In 1862 Robert returned to England, leaving behind his wife, children and mother. After his wife Jane died, Emerald Hill Burrough Council voted that £10 be given to the children, who were in distress because of the death of their mother and the desertion of their father.
In England Robert opened a homeopathic chemist at Henley-Upon-Thames. He remarried in 1866, to Jane Hilton Syme, but then bigamously married Anne Sophia Helmore. Robert and Anne emigrated to South Africa, where Anne had been born - Robert died at Potchefstroom in 1890.
For a much more detailed account of Robert Palk's time in Australia see:
https://historyofhomeopathy.com.au/people/item/127-palk-robert.html - Accessed 18-02-2019
Lawrence Palk Esq. of Haldon House was the vice-patron of the Torquay Homeopathic Dispensary at 6 Cary Parade, 1852
The Homeopathic Record, Northampton, London and Manchester, vols 1 and 2, p280
Melbourne 1859. In the Emerald Hill section of Tanner's Trade Directory under the heading Medical is Palk, R., MD, in Coventry St.
Tanner's Melbourne Directory 1859, p324
Melbourne. In 1862 four councillors were to be elected for the Emerald Hill Municipality. One of the seats had been that of Robert Palk, and was vacant 'in consequence of absence'.
The Herald, Melbourne, Victoria, 29 May 1862, p1
Robert Palk and Jane H Syme were married in the June quarter of 1866, in the Hackney registration district.
Robert Palk and Anne Sophia Helmore were married in the September quarter of 1877, in the Pancras registration district.
https://www.freebmd.org.uk