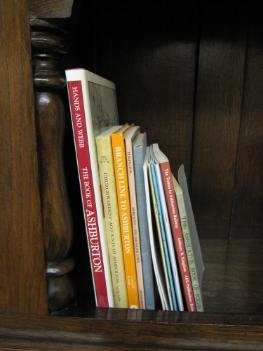 A Guide to the Scenery in the neighbourhood of Ashburton, Devon.
Rev J P Jones, of North Bovey, Exeter 1823. Another edition Exeter 1830

Totnes Roads. The case and allegations of the Trustees of the Totnes Road Act and Creditors on the Tolls against the Bill for a Turnpike Road from Traveller's Rest in the parish of Ashburton to the town of Newton Bushell etc.
Fol. A Plan of the Roads, London 1761?

A Monody upon the death of Lord Ashburton
4to. London, 1784

Rural Employments in Spring: or the Pleasures of a Country Life in Devonshire. A Poem in three Parts.
W Mann, Ashburton, author of The Asylum for the Blind, and other poems, Ashburton 1825

Bibliotecha Devoniensis, a Catalogue of the Printed Books relating to the County of Devon, James Davidson, Exeter 1852

The Pubs and Inns of Ashburton Pete Webb 1995 Obelisk Publications

Horsepower, The Dartington Rural Archive, 1985 has a chapter where Bill Tucker (born 1887) describes his life as a blacksmith in Ashburton

Devonshire Marbles: their geology, history and uses, Gordon Walkden, Geologists' Association Guide No.72, 2015, in 2 vols. Has an in-depth investigation into Ashburton marble.

An Enormous Reckless Blunder, Dr Ali Whiteford, Islands Book Trust, Isle of Lewis 2017. This book is about the Lewis Chemical Works, in which Henry Caunter and James Matheson were involved.

Articles about Ashburton in The Transactions of the Devonshire Association:

The Parish registers of Ashburton and Buckland in the Moor, Rev W M Birch 1896 vol 28

The Ashburton of past days: its manners, customs and inhabitants (Presidential Address), J S Amery 1924 vol 56

Vicars of Ashburton since the Commonwealth, T Cann Hughes 1925 vol 56

Observations and Comparisons made above Ashburton during the same period [February and March 1947  see paper in same volume by Hermon French], E Amery Adams 1947 vol 79

A Tangle Untangled: Lordship of the Manor and Borough of Ashburton, H. J. Hanham,1962 vol 94

(See http://www.devonassoc.org.uk/transactions.htm for more on The Devonshire Association for the advancement of Science, Literature and the Arts) - Accessed 11-1-2014

Fictional Ashburton
Novels which include at least one reference to Ashburton: