Right: A poster for a Grand Festival Performance of Mendelsssohn's Elijah at the Parish Church, presented by the Ashburton Choral Society in 1925.

Tickets ranged in price from 1/- (1 shilling) to 4/-, and could be bought from Mr J F Barker, East Street, Mrs Barnes, Mrs Fogden, Miss Andrews, Mr Tape and Mr E Beer. They could also be obtained from Mr E W Penny of Buckfastleigh.

There were special railway arrangements, with a late train leaving Ashburton for Totnes at 10.30pm, stopping at Buckfastleigh and Staverton.

Thanks to Linda Phillips for this item 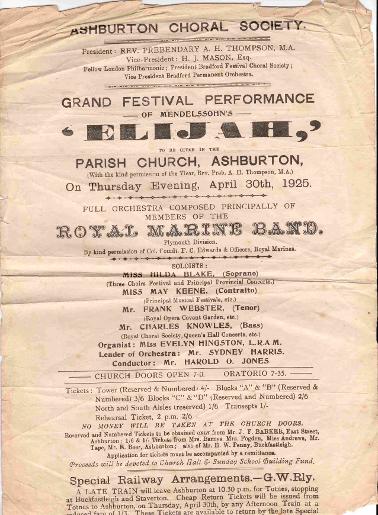 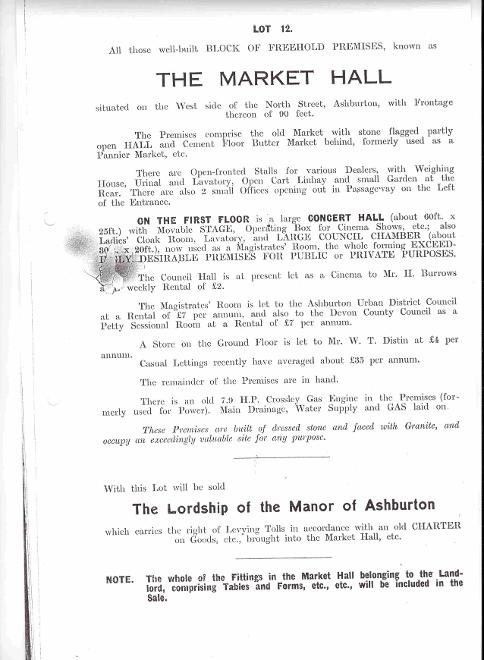 From my own collection
Left: Here are the sale particulars of The Market Hall (now known as The Town Hall) together with the Lordship of the Manor of Ashburton, which were sold at the Globe Hotel, Newton Abbot, 27th April 1927. Michelmore, Loveys and Sons were the auctioneers - the solicitors were Messrs. Harold Michelmore and Co.
This lot was part of the sale of portions of the Halsanger (Halshanger) Manor Estate, the property of the late Mr W R Woodley, who was Lord of the Manor.
"Lot 12. All these well-bilut block of freehold premises, known as The Market Hall situated on the West side of North Street, Ashburton, with frontage thereon of 90 feet.
The premises comprise the old Market with stone flagged partly open Hall and cement floor Butter Market behind, formerly used as a Pannier Market etc.
There are open-fronted stalls for various dealers, with weighing house, urinal, and lavatory, open cart linhay and small garden at the rear. There are also 2 small offices opening out in passageway on the left of the entrance.
On the first floor is a large Concert Hall (about 60ft x 25ft) with movable stage, operating box for cinema shows, etc., also ladies' cloak room, lavatory and large council chamber (about 30ft x 20ft) now used as a Magistrates' Room, the whole forming exceedingly desirable premises for public or private purposes.
The Council Hall is at present let as a cinema to Mr H Burrows at a weekly rental of £2.
The Magistrates' room is let to the Ashburton Urban District Council at a rental of £7 per annum, and also to the Devon County Council as a Petty Sessional room at a rental of £7 per annum.
A store on the ground floor is let to Mr W T Distin at £4 per annum.
Casual lettings recently have averaged about £35 per annum.
The remainder of the premises are in hand.
There is an old 7.9 H. P. Crossley Gas Engine in the premises (formerly used for power). Main drainage, water supply and gas laid on.
There premises are built of dressed stone and faced with granite, and occupy an exceedingly valuable site for any purpose.
With this lot will be sold The Lordship of the Manor of Ashburton which carries the right of levying tolls in accordance with an old charter on goods etc. brought into the Market Hall, etc.
NoTe. The whole of the fittings in the Market Hall belonging to the landlord, comprising tables and forms etc. etc. will be included in the sale."
There was no commercial value to the Lordship of the Manor, as the auctioneer pointed out, but he said that there was 'A certain sentimental value, and that such institutions as the Court Lists were interesting relicts of the past, and should not be allowed to lapse.'
Mr J E Mills of Newton Abbot bought the Lot for £1500.
Western Times 29 April 1927, p8 col1
On 7th May the Exeter and Plymouth Gazette reported that the Chairman of the Urban District Council, Mr E Tucker, stated that the Market Hall had been secured by the Council for £1500.
Exeter and Plymouth Gazette 7 May 1927, p7 col4
*******
The 'new' Market Hall, entirely funded by Lord Clinton, (Lord of the Manor) had been built in 1850: the granite components had come from the Haytor quarries. In November of that year the old market house, which stood at the Bullring, was demolished and sold - the oak that was offered for sale was said to be 500 years old and more. At the time the layout for the new hall was that of a quadrangle, with butchers' shops on three sides. A 'green' market and a butter market ran through the centre of the quadrangle. The lower storey of the main front building was a corn market.
Western Times 9 November 1850, p1 col2 and 23 November 1850 p7 col 2/3
*******

Right: Rules for Cubitt's staff. Cubitt's was a general drapers and outfitters which operated from Clinton House. See Occupations 1900s, under the Banks and businesses section.

This is a hand-written copy made by Dulcie Routley, who began work at the shop circa 1925

Store must open promptly at 6 am until 9 pm all year round. 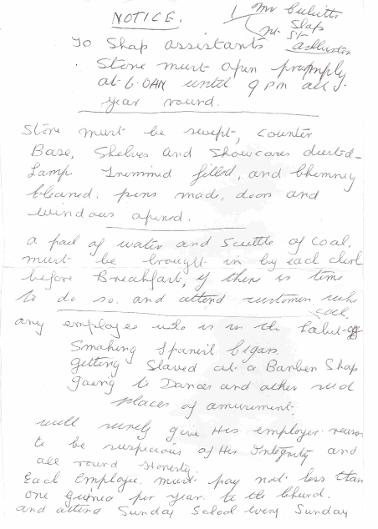 Store must be swept, counter base, shelves and showcases dusted. Lamp trimmed, filled and chimney cleaned; pens made, doors and windows opened.

A pail of water and scuttle of coal must be brought in by each clerk before breakfast, if there is time to do so, and attend customers who call.

Any employee who is in the habit of smoking Spanish cigars, getting shaved at a barber shop, going to dances and other such places of amusement will surely give his employer reason to be suspicious of his integrity and all round honesty.

Each employee must pay not less than one guinea per year to the church and attend Sunday school every Sunday.

Thanks to Ernie Smerdon for this item. 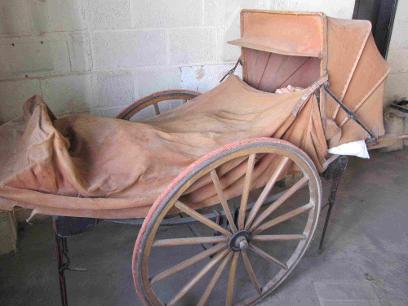 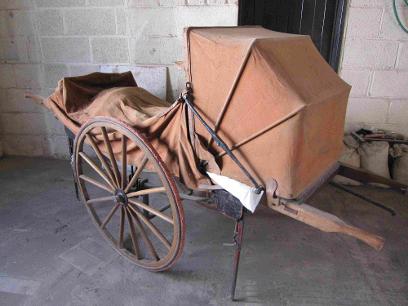 Above: The 'elongated perambulator' used by the St. John's Ambulance for conveying people to hospital. Remembered by Hazel Bray in the 1920s, it might be older.
Many thanks to Mary Woollacott and Mary Dent
******* 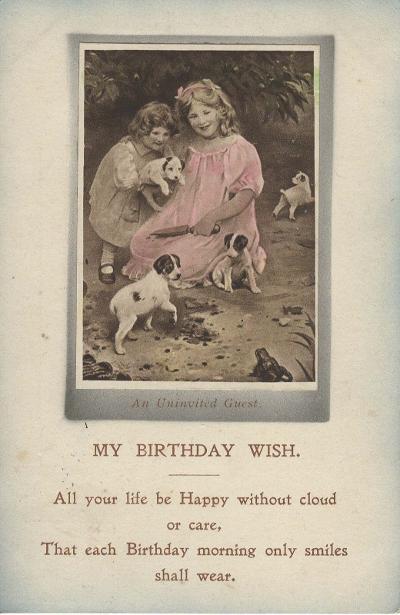 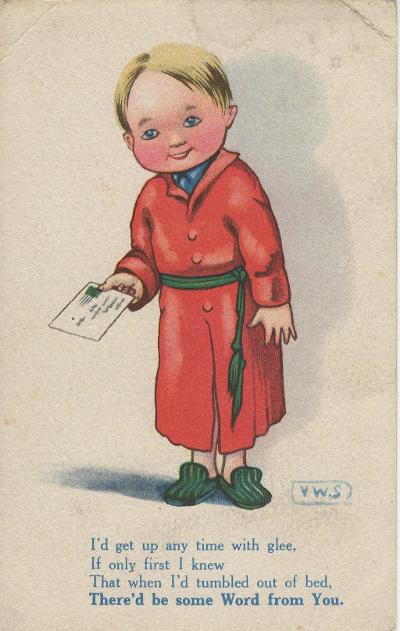 Above and below: Postcards sent to Miss Heather Knight at Orley House in the 1920s. There is an Orley Cottage in St Lawrence Lane (which was Station Road) today; an Orley House also appears at the top of East Street (see People and Properties 1900s)
From my own collection
http://www.mycounciltax.org.uk 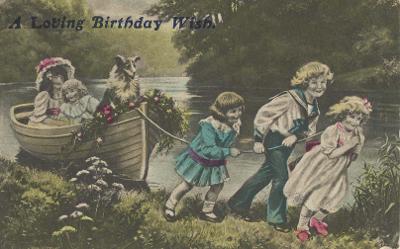 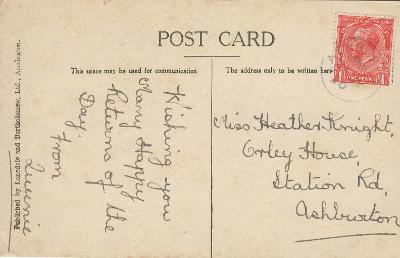 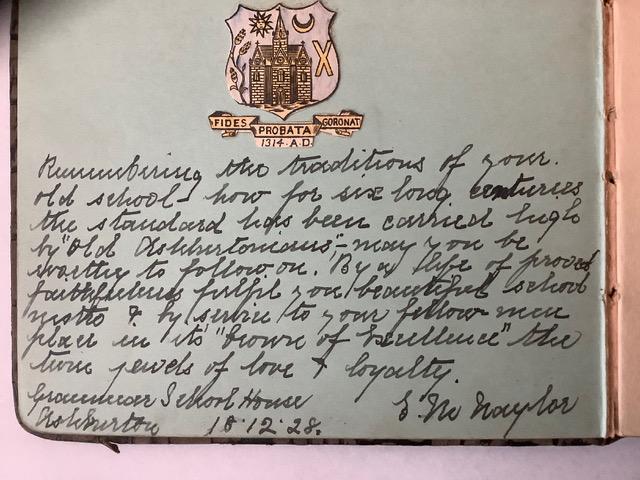 Left: A page of an autograph book belonging to Thomas Henry William Foorde Harran, born 1912. He attended Ashburton Grammar School, and the headmaster, Henry Naylor, was the first one to write in it: 'Remembering the traditions of your old school - how for six long centuries the standard has been carried high by "Old Ashburtonians" - may you be worthy to
follow on. By a life of proved faithfulness fulfil your beautiful [?] school motto and by service to your fellow man place in its "house of excellence" the true jewels of love and loyalty.'
It is dated the 18th December 1928.
With many thanks to Bruce Harran