'Anciently...every suitor was obliged to appear and prosecute or defend his suit in person unless by special license of the King; and this still continues to be the rule in criminal cases. But by sundry old statutes... permission was granted to attorneys to prosecute or defend any civil suit in the absence of the parties.

To him, the repressed repair to learn by what means the oppressor is to be resisted; to him, the orphan and the friendless look, as to one who knows how to direct them to recover their property or their rights. The attorney it is to whom, as a conveyancer in preparing deeds, bonds, mortgages, marriage settlements etc., we confide the transfer and security of our monies, our goods and our estates. It is the attorney before whom we lay these documents, upon his opinion of which we buy and sell land, houses and a variety of other property depending more especially upon what is usually called the Title to their possession. By these means it is the attorney who has an opportunity of knowing the most intimate affairs of individuals in every relative situation in life,; and it is the attorney, thus invested with so much power, who has the opportunity of becoming either a blessing or a curse to the neighbourhood in which he resides.'
The book of English trades and library of useful arts, London 1818, pp6,7

John, the father of famous Ashburtonian John Dunning, was an attorney.

Born in 1701* he 'had settled at Ashburton....where he practised as an attorney. He had married the daughter of a Mr Henry Judsham, of Old Port, in the parish of Modbury**'

John junior 'was born on the 18th October 1731 in the house where his father resided and carried on his business, which house is still standing, and is pointed out at this day to the stranger by the townspeople of Ashburton, with no little pride and complacency.'

Leaving school at about age 13, Dunning became an articled clerk in his father's firm.

'Several monuments of his industry as a clerk are still to be met with in the neighbourhood of Ashburton, such, for instance, as family deeds and settlements, written throughout by his own hand, and bearing his signature as an attesting witness. Many pages also of the proceedings in the parish books are of his writing, and are signed J Dunning, junior.'

1749 In the National Archives, ref
ADM 106/1077/118, is a letter to or from John Hicks, attorney, Ashburton, detailing Amos Mallett and Prudence Webb's trial for embezzling naval stores.
http://discovery.nationalarchives.gov.uk/ - Accessed 21-11-2014

Richard may have been the same Richard Harris who left a charitable bequest in his will of 1778 (see the Rich and poor section of People and properties). 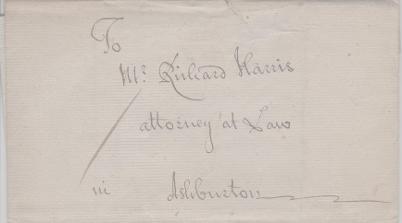 Above: Letter addressed to Mr Richard Harris, May 1770

*******
Mary, the daughter of John Edmonds, attorney, and Ann his wife, was baptised in May 1780
Parish records
In 1774 Thomas Soper was apprenticed as an attorney to John Edmonds of Ashburton.
In 1780 both John Rowe Southmead and Rob Abraham were apprenticed to John Edmonds.
Register of Duties Paid for Apprentices' Indentures, 1710 - 1811, availabe via https://www.ancestry.co.uk

A memorial on the wall of St Andrew's Church commemorates John Edmonds, who died 10th August 1808, aged 63 years. He was an attorney.
See photograph in the Ashburton and the East India Company section

The death of John Smerdon, attorney, at Ashburton, was reported in 1817. He may be the same John Smerdon who was apprenticed to Richard Harris, above.

In 1783 Vincent Langworthy was an apprentice to Thomas Tucker of Ashburton, attorney.
Register of duties paid for Apprentices' Indentures 1710-1811

The marriage of Thomas Tucker, attorney, and Miss Cooksley, both of Ashburton, was announced in 1793

'Doctor Andrew G C Tucker* was born in 1778 at Ashburton. After qualifying as a solicitor and obtaining the degree of LL.D. of St Andrews, he practised in that town and evidently from his writings was a keen naturalist and philosopher.'

1761 The banns were read in March for the marriage of Solomon Tozer of Ashburton and Catherine Wreford of Bow.

1765 Solomon Tozer, the son of Solomon and Catherine, was baptized on July 4th

1767 Moses Tozer, the son of Solomon Tozer and his wife Rebecca, was baptized in May.

1817 A 'substantial' property in West Street occupied by Solomon Tozer is up for sale. The house had two parlours, a drawing room, a kitchen, 7 bedrooms, a wash-house, scullery, pantries, drying lofts and a pump.

This is probably the same Solomon Tozer who died aged 48 in 1819, and was buried in Ashburton on 19th May. The burial record states that he was an attorney.

In 1819 the Exeter Flying Post printed a notice regarding the estate of the late Solomon Tozer, attorney-at-law at Ashburton. Anyone with a claim on the estate was to contact Mr R M Tozer of Newton-Abbott or Mr J C Tozer of Teignmouth.

5th March 1821. Solomon Tozer married Mary Rendell by licence at the bride's parish, Stokeinteignhead. Solomon was of the parish of Ashburton.

The 1861 census of Ashburton shows Henry Tozer, solicitor, living in East Street. With him is his wife Harriet A, his daughter Harriet M E, and his son Solomon.

Henry was probably the son of Solomon and Mary Tozer, born 9th August 1829 and baptised in Ashburton on 6th January 1830. The Devon Family History Society index shows Solomon as a sergemaker.

http://www.freecen.org.uk
https://familysearch.org
Ashburton Baptisms 1830-1840 Devon FHS 2006
Solomon and Mary may be the same couple of that name living at Abbey View in the 1861 census. Solomon is still there in 1881, aged 89 and describing himself as a retired sergemaker. He was born in Somerset.
http://www.freecen.org.uk
https://familysearch.org

In 1894 the following obituary was written about Henry Tozer:

'Henry Tozer was the youngest son of Solomon Tozer, a member of an old Ashburton family, long connected with the woollen manufacture. He was educated at the Ashburton Grammar School, and entered the legal profession about forty years since, having served his articles with the late Mr Edgar, of Weston-super-mare. He took an active part in local matters, and his genial and generous nature made him a popular man. For many years he had the management of Spitchwick and Widecombe Manors, then in Chancery. For some time Mr Tozer had withdrawn from public business, and his son and survivor Mr Solomon Tozer, having entered into partnership with him, he devoted himself to his garden and other kindred pursuits.

Mr Tozer joined the Association in 1872, and the success of the meeting at Ashburton in 1876, was largely due to the active interest he took in the arrangements, and to his liberal hospitality on the occasion. He was also one of the early members of the Teign Naturalists' Field Club, having been elected in 1865.

Early in life he married Harriet Goodhall*, who died in 1884 leaving a son and daughter. Early in 1893, Mr Tozer moved into his country house at Priestaford, near Ashburton, where he died suddenly on the 27th August, at the age of 64.

For more on this see the Conflict section of Ashburton in peril.

When parts of a phaeton belonging to Mr Thomas Cousins were stolen from a coach house in East Street, five guineas reward was offered for the conviction of the culprits. Application could be made to Mr Joseph Gribble, secretary and treasurer of the Ashburton Association for the prevention of robbery and theft.

On 30th October 1835 a fiat in bankruptcy was issued against Joseph Gribble of Ashburton*4, scrivener.

He lived somewhere in West Street. Later that year (1835) the property, 'late and for many years in the occupation of Mr Joseph Gribble' was up for auction at the London Inn.

In 1851, 76 year old Joseph Gribble, coroner and solicitor, was living in West Street. A widower, his 3 unmarried daughters and one unmarried son were living with him. The 31 year old son, Arthur M Gribble, was a dissenting minister.

Robert George Abraham, of 21, Harp-Lane, Tower, and Ashburton, articled to Robert Abraham, Ashburton, was listed amongst those applying to be admitted as attorneys in the Court of Queen's Bench, Hilary Term 1841.
The Jurist, London, 1841, vol IV p 1042
Articled clerks who passed their examination at the Hall of the Law Society, Hilary Term 1841: Robert George Abraham, articled or assigned to Robert Abraham, Ashburton.

Robert George Abraham, the son of Thomas and Mary, was baptized at Lambeth, Surrey, in May 1819
Transcription from FamilySearch England Births and Baptisms 1538-1975
In the 1841 census he was an attorney, in the household of Robert Abraham [snr.] in East Street. Robert Abraham snr. was approximately 80 years old; Robert George was approximately 20.
1841 census HO107, piece no 253, folio 21, p37
When he married Katherine Anne Hainworth in 1853 he was a solicitor living in Ashburton. His deceased father was Thomas Abraham, barrister at law.
Crediton parish records
He died in 1908 aged 89, and was buried at Woodland
Woodland parish records

For more on George Caunter see the Caunter family under People and properties.

1850. The following are listed as Attorneys in White's Directory:

When Joseph Gribble died in 1852, a vacancy occurred for the post of coroner. W A Cockey, solicitor, had been deputy coroner for some time, and was a candidate for the position.
Western Times 2 October 1852, p7 col5

This is possibly Robert Dobell, who in the 1861 census was the 14 year old son of Robert Dobell, a solicitor's managing clerk. At the time Robert was living with his parents and 6 siblings in East Street.
https://www.freecen.org.uk, 1861 census RG9/1405, folio 32, p13

Born in Cheshire, Henry Mallaby Firth was baptised in Wittan in 1852, the son of Frederic Hand and Mary Firth.

He was an articled attorney clerk in Lewisham in 1871. In 1875 Mr Firth, son of F A Firth of Cator Court, went into partnership with Mr G Caunter, of Ashburton.

He married Frances Caunter in Widecombe parish church in 1877. At the time of his marriage his residence was Cator Court, Widecombe. Frances was the daughter of solicitor George Caunter.

Ledgers and account books for Caunter and Firth, solicitors, are held at the Devon Archives and Local Studies Service (South West Heritage Trust)

In the 1891 census Henry Mallaby Firth, solicitor, is shown at The Knoll, Ashburton. Forty years old, he is living with his wife Frances, three children and three servants.

In the same census Frederic H Firth, 66 and a JP living on his own means, is living at Place House. He was also born in Cheshire.

Henry Mallaby Firth died, aged 74, in 1926. He was lord of the manor of Ashburton, a governor of the Grammar School and trustee of the church lands amongst other roles.
Western Morning News 11 March 1926, p3 col5

Other Ashburton solicitors in the 1891 census are: 3 members of the Tucker family (Robert, Robert C and Robert E), Robert G Abraham and Solomon Toyer*

In 1896 Captain S Tozer, solicitor at Ashburton, died. He was chairman of the committee for the Constitutional Club, a retired Major of the Ashburton Company of Volunteers, a one-time churchwarden and governor of the Grammar School, and the first secretary of the Ashburton Building Company. He had also been Portreeve.
Exeter Flying Post 15 February 1896 p3 col4