Land agents, surveyors and auctioneers
William Mann
In March 1843 a messuage or dwelling house was to be sold by auction at Bate's Golden Lion Inn. Situated at the higher end of East Street, the property had a yard and enough stabling for 20 horses. The stabling could, suggested the advertisement, be converted into six dwellings.
Details could be obtained from William Mann, auctioneer and land agent, East Street.
Western Times 25 March 1843, p1 col3
Several people named William Mann were in Ashburton in the mid 1800s. The William above might be the 45 year old William Mann who was living in East Street in the 1851 census. Born in Ashburton, he was a butcher and auctioneer.
1851 census HO107, piece no 1871, folio 266, p15
William Mann, auctioneer, was elected to the guardians of the Newton Union in 1856.
Exeter and Plymouth Gazette, 19 April 1856, p8 column 1
Particulars about the White Hart Inn, Newton Abbot, which was to be let in 1859, could be had from Wm Mann, auctioneer and land agent, East Street, Ashburton.
Western Times 10 December 1859, p1 col1
In 1862 a middle-aged man was seeking employment as a farm bailiff. Prospective employers were to contact Messrs Mann and son, auctioneers and land agents.
Western Times 10 May 1862, p4 col1

Henry Couch Creagh
James Creagh, the son of Henry Couch and Mary Caroline Creagh, was privately baptized in August 1828. Henry was described as a land surveyor. James died aged 14 days.
Parish records
Mr H C Creagh, house and land agent, was advertising a property to let 'in the best part' of Ashburton in 1849. It would be particularly suitable for a professional gentleman.
Exeter and Plymouth Gazette, 17 February 1849, p1 col1
Henry Couch Creach, land survetyor, was elected to the guardians of the Newton Union in 1856.
Exeter and Plymouth Gazette, 19 April 1856, p8 column 1
61 year old Henry Couch Creagh was living at Staverton Place in 1851. A land surveyor and auctioneer, he had been born in East Stonehouse, Devon. With him on the census was his wife and 6 children, with the four youngest having been born in Ashburton.
1851 census HO107, piece no. 1871, folio 359, p3
William Rolstone Whiteway
The Town and Manor mills, a flour mill currently run by Mr Stephen Yolland, was to be let in 1851. The mills had only been built a few years before, and included a 22 foot high water wheel driven by the river Yeo. A rich watered meadow, dwelling house and outbuildings were included in the lease. Mr W R Whiteway, land agent, was the proprietor.
Exeter and Plymouth Gazette, 13 December 1851, p1 col1
42 year old William R Whiteway, his wife Elizth and son William R were in Kingsbridge Lane in 1851. William snr., a land agent, maltster and seedsman, had been born in Chudleigh.
1851 census HO107, piece no 1871, folio 334, p42
In 1852 the dwelling-house of Miss Eales, deceased, in West Street was to be let. The house had a breakfast room, dining room, drawing room and sitting room, plus 7 bedrooms, dressing room and closets etc. There was a kitchen, two pantries,cellar, washhouse, coal-house and well-stocked garden. Those interested could apply to Mr W Rolstone Whiteway, land agent.
Western Times 15 May 1852, p4 col2
Mr Whiteway, land agent, was at Kingsbridge House in November 1852
Exeter and Plymouth Gazette, 27 November 1852, p1 col2
W R Whiteway was described as a maltster and land agent when he took John Foaden to court in 1855. The dispute centred on who was responsible for paying for malt supplied to the Sun Inn by Whiteway.*  Judgment was given to the defendant.
* See Inns and Hotels under Banks and Businesses 2 for more details
Western Times 1 September 1855, p7 col3

1858. Mr W R Whiteway, 'land agent etc.' was advertising seed from 10s to 30s an acre, suitable for lawns, orchards, pasture and parks. He also had 'excellent mangold wurtzel seed'.
Western Times 3 April 1858, p4 col3
A brick built 10 room house was to let in Ashburton in 1865, in 'a healthy and pleasant part of the town'. Applications could be made to Messrs. Whiteway and Foot, land agents, Ashburton.
Exeter and Plymouth Gazette 16 June 1865, p4 col2
In the 1871 census William Foot was with his father-in-law William R Whiteway, in East Street. With him was his wife Susanna R and three children. William Foot was a land agent.
1871 census RG10, piece no. 2080, folio 26, p4
William Rolstone Whiteway was 75 when he died in July 1884. A churchwarden, he was of Orley (?) House, Ashburton.
Parish records
In 1889 George C Foot, of Whiteway and Foot, Ashburton, was appointed as a bailiff for levying distresses*.
Western Morning News 9 February, 1889, p5 col6
*Levying distresses appears to be the seizing of possessions in order to force payment of a claim
https://legal-dictionary.thefreedictionary.com/distress
The Sawdye family
Edwd, The son of William and Elizabeth Sawdy, was baptised in June 1815. The family lived at Summer Hill, Ashburton, and William was a yeoman.
Parish records
In January 1818 Elizabeth Sawdye, aged 30, was buried in North Bovey; she was of Summerhill, in Ashburton. Her death was followed in February by that of Mary Sawdye, aged 10, and then William, aged 5, both of the same address.
North Bovey parish records
Edward Sawdye married Rebecca Perry in Ashburton in 1836
Devon Family History Society transcriptions via https://search.findmypast.co.uk
In June 1843 a factory, mill and dwelling houses in Buckfastleigh were for sale. Mr E Sawdye was to conduct the auction at the London Inn, Ashburton.
Exeter and Plymouth Gazette, 10 June 1843, p1 col2
Fields in Shaldon were being sold in 1844. Prospective purchasers could apply to Mr William Sawdye, Land Surveyor, Ashburton, and to Mr Edward Sawdye, auctioneer.
Exeter and Plymouth Gazette, 24 February 1844, p1 col2
By the time of the 1851 census Edward and Rebecca were living in West Street with two sons, William and Edward J., and two daughters. 36 year old Edward was a surveyor, auctioneer and land agent, and the entire family had been born in Ashburton.
1851 census HO107, piece no. 1871, folio 268, p19
Edward John, unmarried, the son of Edward and Rebecca, was with his parents in 1871. Aged 20, he was a surveyor and auctioneer's clerk.
Also in the household was 7 year old William E Sawdye, who had been born in London.
1871 census RG10, piece no. 2080, folio 70, p13
William Sawdye married Rebecca Ann Palk in the September quarter of 1862, in Lambeth.
https://www.freebmd.org.uk
William Edward Sawdye, the son of William and Rebecca Ann, was baptised in Ashburton in December 1864. His father was a mercantile clerk. A note in the register says that William Edward was born on November 14th, 1863.
Parish records
Edward snr. was a widower in the 1891 census, and at 76 and according to the census was still a surveyor and land agent. His 27 year old grandson, William E Sawdye, was in his household, and was an auctioneer's clerk. William had been born in Peckham, London.
1891 census RG12, piece no. 1698, folio 55, p17
Edward Sawdye died in August 1898, aged 83. Head of the Sawdye and Son, he had been infirm for some time, but during his lifetime 'had filled most of the borough offices'. He had been a churchwarden, and had been one of the original members of the Ashburton Lodge of Oddfellows, established in 1845.
Western Morning News 18 August 1898, p5 col3
30 year old Edward J Sawdye was living in East Street in 1881. With him on the census was his wife Sarah E., his daughter Elizabeth M., and his son Edward.
The family, with the addition of son John P., were still in East Street in 1891, at the Golden Lion Hotel. Edward was an auctioneer and hotel keeper.
Edward jnr.was the only child of Edward J and Sarah E to be with his parents in the 1901 census. He was an auctioneer, surveyor and valuer, and was a partner in the business. The family was still at the Golden Lion.
1881 census RG11, piece no. 2161, folio 63, p3
1891 census RG12, piece no. 1698, folio 48, p3
1901 census RG13, piece no. 2053, folio 56, p12 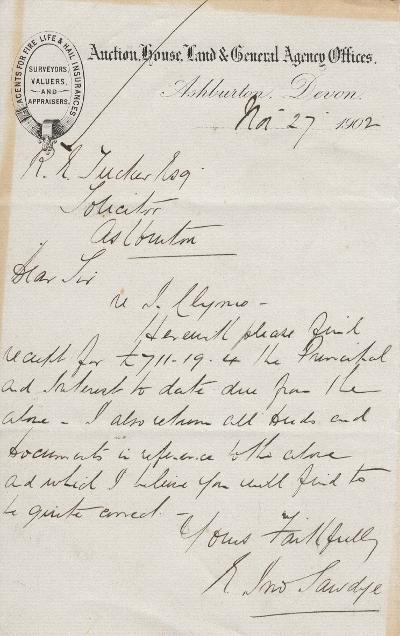 Left: A letter from E Jno. Sawdye to R E Tucker Esq., solicitor, dated 27 November,1902.
The letter is headed Auction House, Land and General Agency Offices. The firm is also Surveyors, Valuers and Appraisers, and agent for 'Fire Life and Hail insurances'*.
It says:
'Re J Clymo. Herewith please find receipt for £711.19.4 the principal and interest due from the above - I also return all deeds and documents in reference to the above and which I believe you will find to be quite correct.'
From my own collection
*Hail - insuring against damage to crops. 'In soliciting the attention of Farmers and others who may be interested in protecting themselves from losses by Hail-storms...'
Albert D Thaer, The Principles of Agriculture, vol1, London, 1844, p5
By 1902 Kelly's Directory showed James Clymo as the proprietor of the Golden Lion Family and Commercial hotel and posting house.
Kelly's Directory of Devonshire 1902, page32
In 1907 the amalgamation was announced of Rendell and Symons with Sawdye and Son. The business was to be carried on in the name of Rendell and Sawdye, with offices in Ashburton, Totnes, and Newton Abbot.
Totnes Weekly Times 26 January 1907, p4 col2
Particulars for Thornecroft, Landscove, which was for sale in December 1908, could be had from Rendell and Sawdye, land agents, Ashburton.
Western Times 4 December 1908, p4 col5
Edward John Sawdye, of Laburnhams, was buried in Ashburton on 1st June 1909. He was 58
Parish records
A headline in the Gloucester Citizen in 1943 announced: 'Nurse, now war-time auctioneer'. The newspaper thought that Mrs J J Sawdye, of Ashburton, was probably the first woman in the country 'to combine the two jobs of auctioneer and nurse'. Mrs Sawdye's husband and all his staff had been called up for the war, but Mrs Sawdye continued to run the business, selling poultry, property and furniture. When not in the office she worked in a nursing home.
Gloucester Citizen 30 August 1943, p6 col5
Sawdye and Harris, land agents, were selling a farm within easy reach of Newton Abbot in October 1946.
Western Morning News 26 October 1946, p4 col3
By 1949 Sawdye and Harris were holding a monthly auction at Newton Abbot market. The Sawdye part of the partnership was J A Sawdye, FALPA, and Harris was C H Harris, FAI, FVI. The company described itself as live stock and general auctioneers, land agents, surveyors and valuers.
Western Morning News 9 February 1949, p4 col6
William Ford
In 1901 William Ford, land agent of Ashburton, was summoned by Stephen William Yolland for trepass in pursuit of game. During the case it was stated that although the men were neighbours they were not on neighbourly terms. The Bench fined Mr Ford 16s.
Totnes Weekly Times 28 September 1901, p3 col2
See the Virtual Museum 1970s for a list of properties for sale by Wadsworth and Co., Ashburton