Some deaths and burials


1774 A child of Bartholomew Carlile, a child of James Thean and a child of Wm Halse, buried these three May 24th 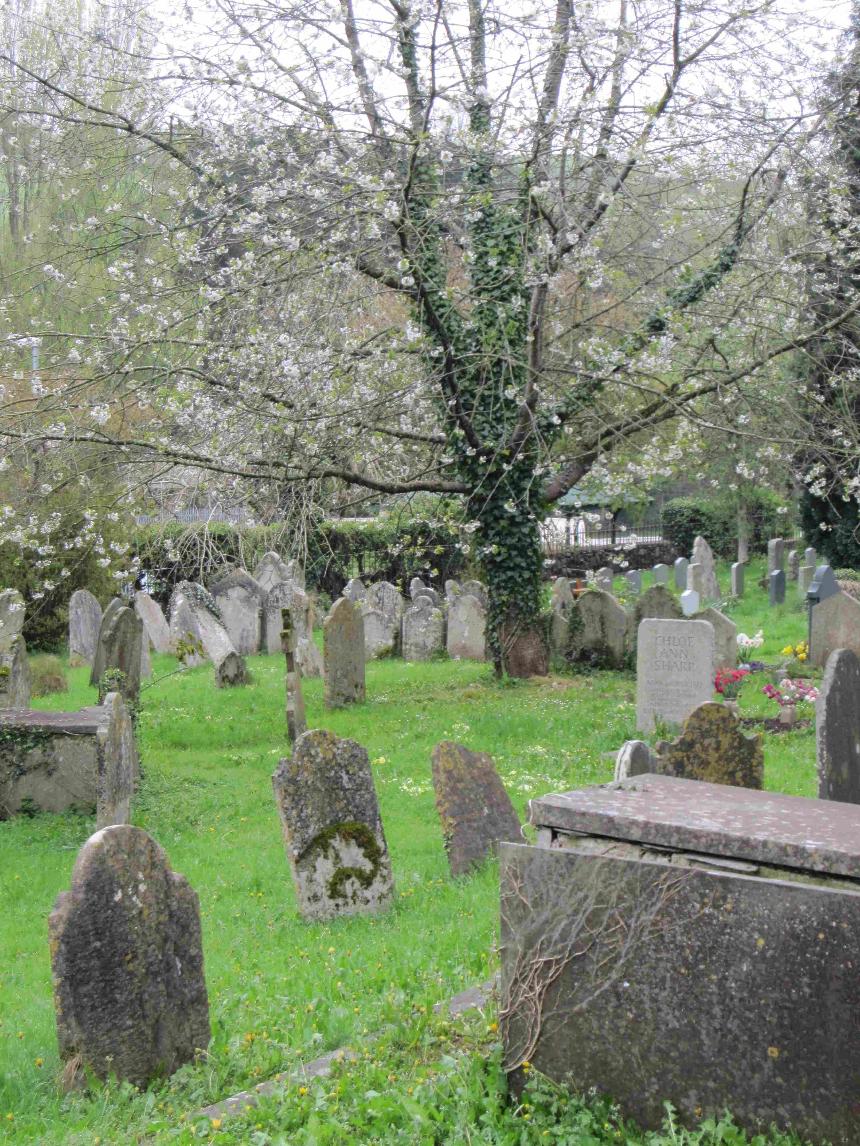 Above: St. Andrew's Churchyard
My own photograph 2015

This is not an exhaustive list for any particular time period - just some records that I have come across during my research travels.

1818, January. In her 84th year, Mrs Mary Dunning, sister of the late, and aunt of the present Lord Ashburton.
Salisbury and Winchester Journal, 12 January 1818, p3 col3

1825 John Caunter, a serge-maker and merchant. He died on a Thursday - as the paper was published on a Thursday, this presumably was the Thursday before, July 27th.
Exeter Flying Post 4 August 1825 p4 col1

1835 March. At Exeter, at an advanced age, Mrs Lloyd. She was the mother of Mr Lloyd, postmaster of Ashburton, and was late of the Golden Lion Inn.
Exeter Flying Post 19 March 1835, p2 col6

1839 April 26th, John Cranch, aged 84, died at Exmouth. Originally from Ashburton, he had been a superannuated Officer of the Customs.
Western Times 4 May 1839, p3 col2

1839 July 6th, Mr W Husson, aged 69. He had belonged to the South Devon Militia for many years, and was later Sergeant Major of the Haytor Regiment of Volunteers.
Western Times 13 July 1839, p3 col1

1839 August 14th, Hannibald Jewell, aged 72. Originally from Ashburton, he had been a superannuated Officer of the Customs of Exmouth.
Exeter and Plymouth Gazette, 17 August 1839, p2 col7

1858 William Melbourne Luscombe died on 29th August. He was the first and only son of William Benjamin Luscombe, late of Ashburton, Devon.
The Age (Melbourne, Victoria) 4 September 1858 p4 col4
vailable through the free newspaper site for Australia https://trove.nla.gov.au/newspaper

1863 Captain James Bowden, on The Pluto, died on or about 28th June, between Sydney and Brisbane. He was the third son of Mr. J. Bowden of Ashburton, Devon, and was aged 43. John William, second son of Captain Bowden, also died, aged 13.

1874 Mrs. Honeywell of Ashburton and her baby both died instantaneously when they were accidentally shot by her brother, aged 12.*

* The only Honeywell death in the September quarter of 1874 in the Newton Abbot Registration district is that of Sarah Jane, aged 0, but a Sarah Honeywill died in the same quarter (again, the only death), aged 27. http://www.freebmd.org.uk/

1881 Richard Henry Luscombe, aged 17, died on February 3rd. He was the only son of the late W. B. Luscombe, formerly of Ashburton, Devon.
The Argus (Melbourne, Victoria) 4 February 1881 p1 col1
Available through the free newspaper site for Australia https://trove.nla.gov.au/newspaper

1904 William Burd Evans, of Brighton Beach, died on March 30th, aged 87. He was the second son of the late Lavington Evans, of Ashburton, Devon.

1922 William Abraham, eldest son of Mr. and Mrs. Abraham of Ashburton, Devon, died at Iron Bark (?) Bendigo. He was the brother of Mrs. S. Mann.
The Mercury (Hobart, Tasmania) 6 May 1922 p1 col1
Available through the free newspaper site for Australia https://trove.nla.gov.au/newspaper

1923. Hilda Elizabeth Nosworthy died on April 10th 1923, aged 29. She was the daughter of Elizabeth Nosworthy, of West End House, Ashburton. The burial was to be in Widecombe churchyard.
Memorial card, sold privately. Not in my possession

January 1654. 'John Browne buried the 20th day, who was taken up againe the 24th and then buried in the high way neere goosapoole.
Parish register

The following is a list of burials in St Andrew's Churchyard, transcribed by Mr. and Mrs. Hatch. The transcription is a selection (it looks like it is those that the Hatches found particularly interesting), is handwritten and difficult to read in places; it is taken from a register that was itself handwritten. Errors are inevitable, and so the list should be used with caution – I would welcome input from anyone who has had access to the original..

Nov 1770 James Coombe. He was drowned in a tar pit into which he fell accidentally.
July 1779 Jean Esgurey (?) a French prisoner on parole. I would say this is Esqurey - see below.
Feb 1780 A daughter of a sergeant of Col. Stewart's regiment, name unknown
Aug 1780 Josef Augustin Gonsales a Spanish prisoner on parole
Sept 1780 Walter Elliot a stranger supposed to be a deserted soldier
Oct 1780 Mary Thompson a soldier's child belonging to to the 49th Regiment
Nov 1780 Samuel Rose a soldier of the 49th Regiment
William Cross a stranger killed by the kick of a horse at ye Golden Lion
Oct 1781 Richard Wilson of the y:L Dragoons
Thomas Robinson son of a Dragoon
June 1782 Gerard Witmont a Dutch prisoner
Jan 1783 Mary Cornelias a soldier's child
Ap The Hon John Dunning son of the Rt Hon Lord Ashburton
John Tozer sergemaker
Aug 1783 John Lord Ashburton and Alexander Tursman (? Fursman)
Ap 1784 Edward a base child of Mary Woodley from the workhouse
Oct 1784 A stranger from the workhouse, name unknown
Sept 1785 James Williams from the workhouse
George Hill from the parish
Ursula Waitman (?) from clock (?)
Feb 1786 John Ireland
Ap 1788 Thomas Smerdon minister of Woodland and master of the Grammar School of the town, both which stations he filled with credit for about 50 years
Feb 1791 A travelling woman, a stranger from the workhouse
May 1793 A soldier of the Gloucester militia
June Thomazine wife of Peter Woodley from the workhouse
July Mary wife of John Skinner, married 16th, had a child 17th, died 18th
March 1795 A French prisoner on parole
Oct A daughter of Richard Hatch (?) a stranger
Nov 1799 a child of a Lancashire militiaman
June 1808 .....?.....of N. Devon militia
July 1811 Preston (?) (Christopher?) Governor of the workhouse
Many thanks to Jeremy Hatch for providing this document

From the parish register:

1740 Mary the wife of Charles Tozer was buried April 12th

1740 A child of William Taylor was buried April 28th

1740 William the son of Moses Bowden was buried May 7th

1740 A son of Solomon Mugridge was buried May 9th

1740 Widow Carpenter of Ilsington was buried May 29th

1740 Grace the wife of Thomas Foott was buried May 28th

*Until 1752 the legal year began on Lady Day, March 25th. Therefore here January, February and most of March would still be considered 1739, although we would think of them as 1740.

1774 A girl of John Hervey the elder buried April 17th

1774 Ann the daughter of John Bowden buried May 3rd

1774 Samuel Dad and a child of JohnWillcoks buried June 4th

1774 Elizabeth the daughter of Robert Bayley buried May 16th

1774 A child of Bartholomew Carlile, a child of James Thean and a child of Wm Halse, buried these three May 24th

1774 William the son of Edward Pearce was buried June 10th

1774 James the son of Joseph Gormully was buried June 29th

1774 Margaret the daughter of Andrew Hodge was buried July 26th

1774 Elizabeth the daughter of Richard Luttrell was buried August 9th

1774 Mary the wife of Thomas Maunder was buried August 14th

1774 Mary the daughter of Wm. Pethebridge was buried August 29th

1774 The son of John Christophers was buried September 12th

1774 Susanna the wife of Thomas Bickham was buried September 18th

1775 John, son of Moses Hill, was drowned in a kettle of water in ye house buried July 23rd

1775 William, the son of the widow Smerdon buried August 15th

1775 Thomas, son of Thomas Lear (had a funeral sermon preach'd being the first in ye new pulpit by Mr Savery (?)) buried September 7th

1775 The son of John White was buried November 12th

1779 Elizabeth the wife of Richard Parmer buried 6th May

1779 John the son of William Ireland, an infant, buried 8th May

1779 James the son of Nicholas Woodley buried 12th May

1779 Susanna the daughter of Thomas Jerman buried 20th May

1779 Mary the daughter of John Clark buried 27th May

1805 (? This entry is out of order) Sarah Denly the wife of William, buried 21st October

1810 - although taken from one page headed 1810, the following entries might cover 3 years

1810 Walter Pearse from the workhouse was buried January 4th

1810 Eliza Penwill, daughter of Jane, was buried May 8th

1810 A stranger from the workhouse was buried October 8th

1867 William Cobe aged 77 was buried May 8th [Difficult to read. FreeBMD has this entry as Cove]

Mrs John Luscombe was buried in August 1890, but the funeral was not without incident. At the graveside a side plank gave way, 'precipitating two of the bearers and the sexton into the grave'. The bearers were able to get out relatively easily, but the sexton needed considerable assistance. One of the chief mourners began to scream, 'too distinctly audible to be pleasant'. The Totnes Weekly Times noted that such an event was bound to cause comment in a small town, 'for at least the usual nine days.'
Totnes Weekly Times 16 August 1890 p8 col3
Mrs John Luscombe was probably Elizabeth Luscombe, aged 81, buried on August 11th 1890
Parish records

All the above are from the parish register
1923. Hilda Elizabeth Nosworthy died on April 10th 1923, aged 29. She was the daughter of Elizabeth Nosworthy, of West End House, Ashburton. The burial was to be in Widecombe churchyard.
Memorial card, sold privately. Not in my possession