Some banns and marriages

This is not an exhaustive list for any particular time period - just some records that I have come across during my research travels.

Above: Ballad from the Bodleian Library (Bod 12856), printed by Elias Keys, and sold by, amongst others, S Mann of Ashburton.
Image courtesy http://ballads.bodleian.ox.ac.uk/search/location/Exeter/?query=&f_Locations=Bristol  and licensed under a Creative Commons Attribution-NonCommercial-ShareAlike 3.0 Unported Licence. Accessed 28-10-2016

*Familysearch has Ellward and Buffett

All the banns above are from the parish register

The Marriage Registers of the Diocese of Exeter from the Bishop's Registers, edited Lieutenant-Colonel J L Vivian, Exeter 1889, p81

1737 (this date changes to 1738 in March, when the new year used to begin. We would say this is January 1738) John Bickham married Letitia Acland January 23rd

1738 Walter Brown and Grace Hoppings were married May 28th

1781 William Spiller and Thomasina Foot were married February 11th. Note: both parties sign with a cross. Besides the mark of the groom is written, 'the mark of William Avery'.

All the marriages above are from the parish register

1789  Wm Heywood Esq. of Ashburton to Miss White. (month - May?)
The Town and Country magazine or Universal Repository of Knowledge, Instruction and Entertainment 1789 pp239,258

1792/93 Marriages. Thomas Tucker, attorney, to Miss Cookesley, both of Ashburton.

1803 Richard Berry and Rebecka May were married February 7th

All the above are from the parish register

1815 George Jackson of the parish of St. Botolph in the City of London and Amelia Gervis of Ashburton, married on September 7th, by licence.
Parish register

1817 At Stoodleigh, Col. John Hilley Symons, of the E.I. C's service, to Ann, eldest daughter of the late John Edmonds Esq. of Ashburton.

1818 John Templer and Elizabeth Sunter, both of the parish, were married by licence 24th June

1829 M. A. Brooking Soady of Middlesex married Mary, eldest daughter of the late Rev. W A Cockey on
June 6th.

1841 Joseph Bowden and Mary Tucker, both of the parish, married on June 29th
Parish register

1841 John Skinner, widower, and Southard, both of the parish, married by licence July 25th

1860 June 7th The Rev. James Law Challis, Rector of Papworth Everard, Cambridgeshire, son of the Rev. James Challis, Plumian Professor of Astronomy in the University of Cambridge, to Margaret Edmonds, daughter of the Rev. William Marsh, vicar of Ashburton.

1871 Wm. I. Bawden, son of the late Isaac Bawden of Ashburton, Devon, married Margaret Ellen Creedon on 11th February at St. Patrick's, Melbourne. She was the daughter of the late Edward Creedon of Toureen, County Cork.
The Argus, (Melbourne, Victoria) 15 February 1871 p4 col4
Available through the free newspaper site for Australia https://trove.nla.gov.au/newspaper

1905 Mr H S Steele married Miss Wright of Paignton at Banff, Canada. He had previously been a captain of the Haytor Volunteers whilst living at Ashburton, and had served in the Boer War.
Exeter and Plymouth Gazette 4 August 1905 p13 col1 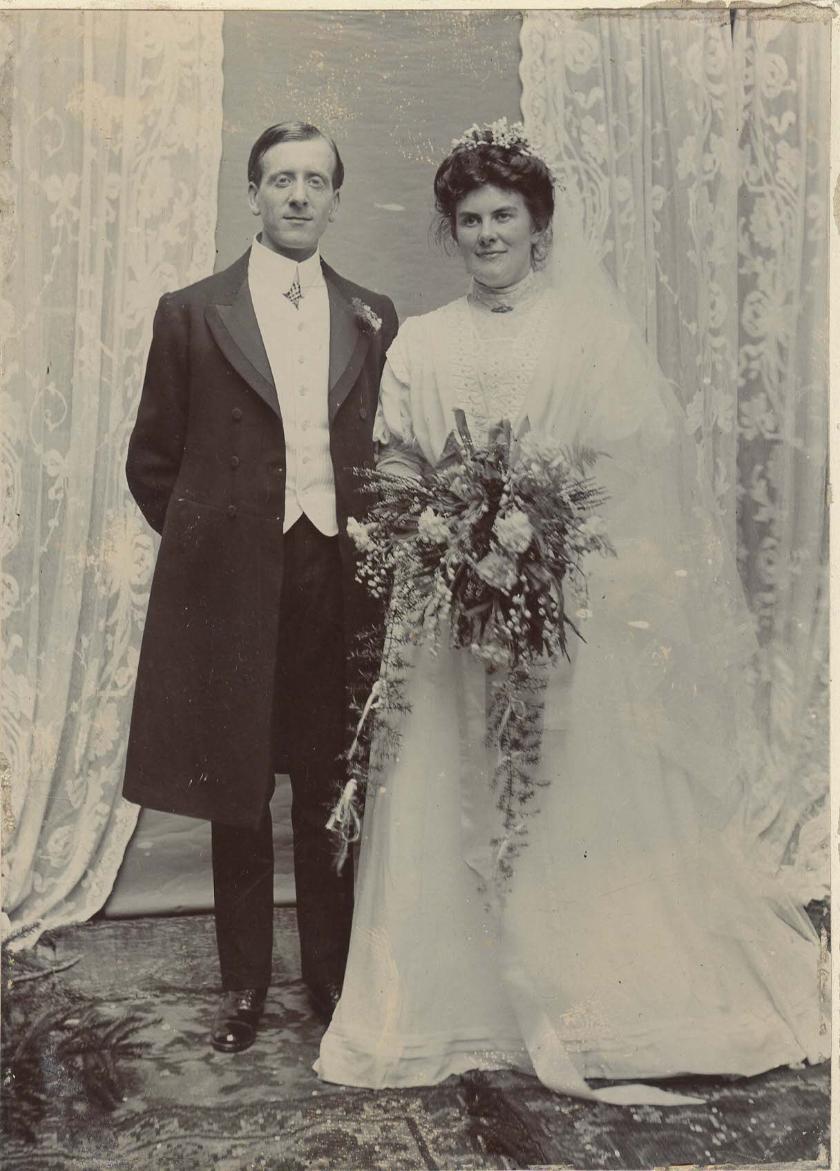 Above: Wedding photograph of unidentified couple by Miss Satterly, photographer, Ashburton. Assuming that Amy Satterly used her married name after 1909, this would be before that date.
From my own collection
In 1912 Arthur P Endacott, of Basingstoke, married May V Merrifield at Plymouth. Arthur was the youngest son of Mr and Mrs J Endacott, of Ashburton.
Western Daily Mercury 9 July 1912, p10 col7

The couple celebrated their silver wedding in 1939, at which point they were living in Albany. Gertrude's parents were named as Elijah and Bessie Smerdon, and Thomas's late mother as Mary Elizabeth.

1922 James Byers Hay married Bessie, widow of the late S. Mann, on November 11th. She was the youngest daughter of Mr. and Mrs. William Abraham of Ashburton, Devon.

1925 Mary Louisa Flavell, widow of the Rev. Thomas Flavell, died at the home of her daughter in Ashburton, Devon, on May 17th.
The Press 21 May 1925 Volume LXI, Issue 18387, p1 col1
Available through the free site for New Zealand http://paperspast.natlib.govt.nz