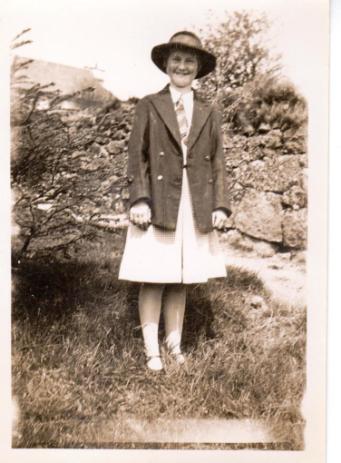 The school was aiming to attract the children of business and professional people, and inevitably in a rural community, many were from farming families. This reflected both Henry and Edith's own background – Henry's father had been both a farmer and carpenter, and Edith's had been a draper.  A lot of farmers' children came from Totnes and Buckfastleigh - Eric Smerdon came from Buckfastleigh on the train. (Joy Smerdon)

Anne Douglas, who went to Greylands in the 1950s, believes that most of the pupils were day girls – some left after the 11+ to go to grammar schools. As well as local children, girls also came from Holne, Yelverton, Rattery, South Brent, Ivybridge – their parents were farmers, clergy, doctors, business people in the town and the surrounding areas. Hazel Bray remembers the children of the local bank manager going there. As with the earlier Wilderness School, many of the pupils were from abroad – India was particularly mentioned.Siblings often attended the schools, and the staff's own children and relatives swelled the numbers: Henry Naylor's youngest two children, Margaret and David were enrolled. When Ivan Stoyle came to teach at The Wilderness School in the mid 1930s, his sister Edna Stoyle boarded at Greylands. (Ian Stoyle ephemera ) One of Edna's teachers at this time was Isabella (Ella) Fox – later Ivan Stoyle and Ella Fox married.

The following list contains all the pupils that I have come across so far,  from a variety of sources - there may be errors. It is certainly not complete.

Pupils at the Wilderness:

Thomas i and ii

Rogers and Savery had joined the Fourth Form the previous term.

Nicholson had joined in the current term.

'In Forms I and II there are sixteen boys....There are five boys in Form I and eleven in Form II.

In our form there are two boys from India and Cyprus. There are two clergymen's sons, counting myself.

Current pupils in The Wilderness Magazine, 1935-36:

(All the above from The Wilderness School Magazine)

1950s Geraldine Mann, Andy Dent, Shelagh Dent, Peter Bellamy, Felicity and Rosemary Patrick (daughters of the Vicar of Rattery), Dawe from Holne, Palmer from Yelverton (previous four from Anne Douglas), Arthur and John Smith.
Susan Hall, a Teresa (Terri for short), a Felicity, June Setters (?) from Buckfastleigh, a Hazel from Buckfastleigh, Susan (?) Paul, whose parents owned a pub or a guesthouse at Holne, (see Pawley below), a Cynthia Hall and her sister, Margaret Cornish, who lived with her aunt at the Toby Jug Inn in Bickington. Daphne Tucket, a Jamaican girl, Arlene, and her brothers Alistair and Algernon - their surname was De Costa, and they lived at the school. There were two doctors' daughters, one of whom was called Fiona, and Anne Gibson - she lived at Holne Court Farm in Holne, which her father had bought in 1947. Jane Gibson, younger sister of Anne. Rosemary Davies, whose parents had a hotel in Totnes? Susan Davenport (from Pat Blayney and Anne Mortimore)
Susan Pawley, whose father was a publican at the Church House Inn, Holne.
Sylvia Pinch from Totnes, whose father had an electrician's.
Margaret Weaver, who was adopted at age 5 by Miss D'O, who by then had married David Weaver.
Rosemary Davis (?)
Shirley and Pauline Stoyle (Shirley the older sister)
Susan Lewis, a boarder. Her father was in the services (army?)
Caroline Stevens, whose family farmed near Widecombe
Rachel Green and twins Cloe and Stella ('Pip') Green, from Rill Farm, Buckfastleigh
Jean Thorn, from Beara Farm, Buckfastleigh. Her father was a farmer.
Sally Palmer, from Bowerdon Farm, Buckfastleigh. Her father was a farmer.
Anne Lethbridge, whose father farmed at Buckfastleigh.
Hazel Whitney, Buckfastleigh.
Mary Hall and younger sister Cynthia Hall, who lived at the school. Miss D'O was their guardian.
Felicity Burrows, whose mother was a teacher at the school.
Susan Ashford, whose father was the manager of Lloyds' Bank
Pat Blayney
Bridget Hunt and her younger sister; lived at the school house with Mr and Mrs Hunt, both teachers.
Glyn Middlemas from Holne, whose father was a travelling salesman.
Muriel White from Littlecombe Farm, Holne, whose father was a farmer.
Gillian Burtram
Sandra Sherman
Sisters Caroline and Janet Dawe, and their cousin Pat Dawe.
Mavis ?
Virginia Lamplough
Angela ?
June Setters, from Buckfastleigh
Olga and Mary Churchward sisters, from Churchwards Grocers (Olga the elder sister)
Rosemary Edwards
Daphne Tucket, whose father was a farmer.
Susan Blair, and her younger sister. Their father was a medic in Ivybridge
Teresa Bradridge ?
? Counter. Her parents kept a sweet shop near the school.
Mary Toocker? Her father was a farmer at Luscombe Farm, Buckfastleigh
Rosalind Ash
? Pedrick. Her parents were hairdressers, just below the school in East Street
Geraldine Mann
? Pearce. One of three children from Peartree, Ashburton
Hillary Beard, from Buckfast.
Brenda Kerslake, whose parents were Kerslakes the chemists.
Sheila Wyatt
Shelagh Dent (had brother  -  see 'Boys')
Pauline Palmer from Yelverton. A boarder?
Susan Davenport 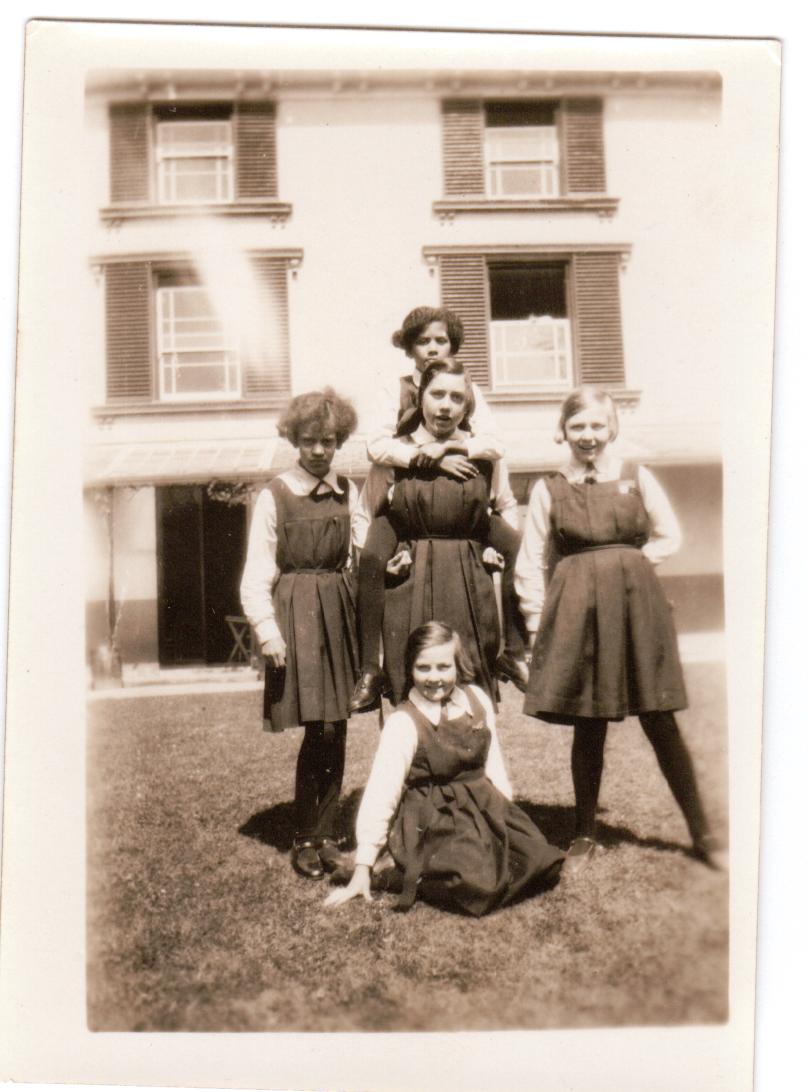 Many thanks to Richard

Boarders had to pack quite a trunk full when they came to school - here is what Edna Stoyle had to bring:

3 pairs of black stockings and mending

1 pair of fawn stocking and mending 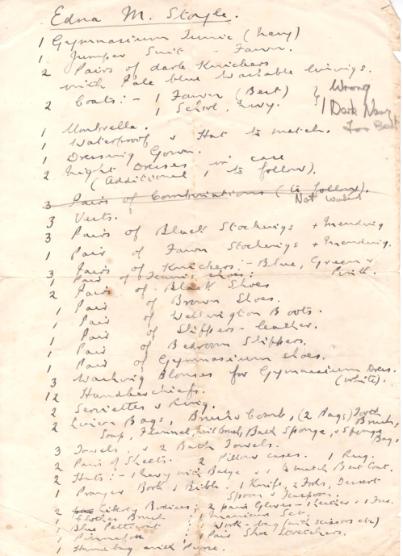