Growing up in the 1960s
My own memories (Anne Bligh)
I recall being awestruck with our neighbours Captain and Mrs Stidston,* who lived at Ashe. Not only did they cut the crusts off sandwiches, but they had a live-in maid called Kath who had been there for years. It would have been Kath who cut the crusts off, for sure.
The day that Capt. Stidston died all the curtains of the house were drawn shut, something I had never seen before. Incidentally, when we moved to Devon my mum thought it was a very rich county, because everyone talked about so-and-so's maid - she didn't realise at first that this just meant 'daughter'. But Kath was a real maid.** I met her again in 2019, and she told me that she was 15 when she first started working for the Stidstons, just after WWII. Her mother found the job for her, but she was reluctant - 'I stayed 23 years'.
We certainly didn't have a maid, but Chippy came to help with odd jobs and the garden - that is really an understatement, because he took on some mighty projects, although he was in his 70s. I don't know why he was called Chippy, because he was a bricklayer by trade: he lived in Rewlea Cottages. His full name was Alfred John Hardy (born 1888), and always maintained that he was related to the famous Thomas Hardy, but was descended from the 'black sheep' side of the family. I have read that Thomas Hardy disowned much of his family because its origins were not elevated enough for the novelist's liking, so this may be true.*** 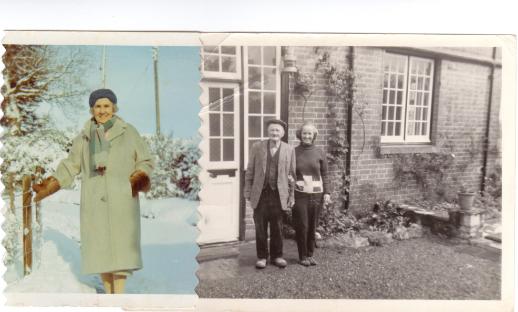 Our house was extremely cold in winter - you had to be highly motivated to move from in front of the fire (sometimes a coal fire, sometimes two bars of an electric fire). I was known to wear my dressing gown in bed. The Big Freeze of 1962/63 occurred soon after we moved to Ashburton - I went to school in Newton Abbot at the time (or rather I didn't). It must have been extremely hard for my dad, 'H' Lowell, because as the newsgent he had to walk about a mile down to the shop very early in the mornings (5.30? 6am?) for the arrival of the daily papers.
I often went down to the shop (The Paper Shop at 6 North Street) on Saturday mornings, and then sometimes we bought fish and chips for lunch from Mrs Hambly - her shop was at 26 North Street. She was friendly, but always looked hot and bothered: her grey hair was only just held back in a bun because a lot of it escaped. The fish and chips were of course in grease proof paper, then wrapped in old newspapers. I am told by Wendy Major, and I confess I do not personally remember this, that there was always a cat on the window cill - right next to the fish.
The formidable Miss Black presided over the library, which I think was in St Lawrence Chapel. She was so scary that in later years, as a young married woman, I remember ironing a library book dust jacket to flatten out the tooth marks of an exuberant puppy.
Frisby's shoe shop was at 8 East St., on the corner with St Lawrence Lane - Mrs MacDonald worked there. Other shops were: Mrs Underhill's at 2 North St., which sold tobacco and Sunday newspapers, and the Sun Stores at 3 North St., which was a general provisions and grocery store. Jim and Ruby Churchward were the owners - Ruby Churchward was always cleaning: evenings, Sundays, any time it was shut. If she wasn't serving in the shop she was cleaning it.
Parsons and Co was another grocers at 17 West Street (to the left of the arch).
There was also Osborn's at 16 North Street - again in later years when newly married I remember buying loose broken biscuits there. Much cheaper than buying whole ones!
Mrs Coole ran the Wool Shop at 9 and 9a West Street. She sold ladies' and children's wear as well as wool, and also toys - there were little packets of foreign stamps on the door,  which I used to buy with my pocket money. The stamps were the only reason that I ever learned that Helvetia was something to do with Switzerland. **** 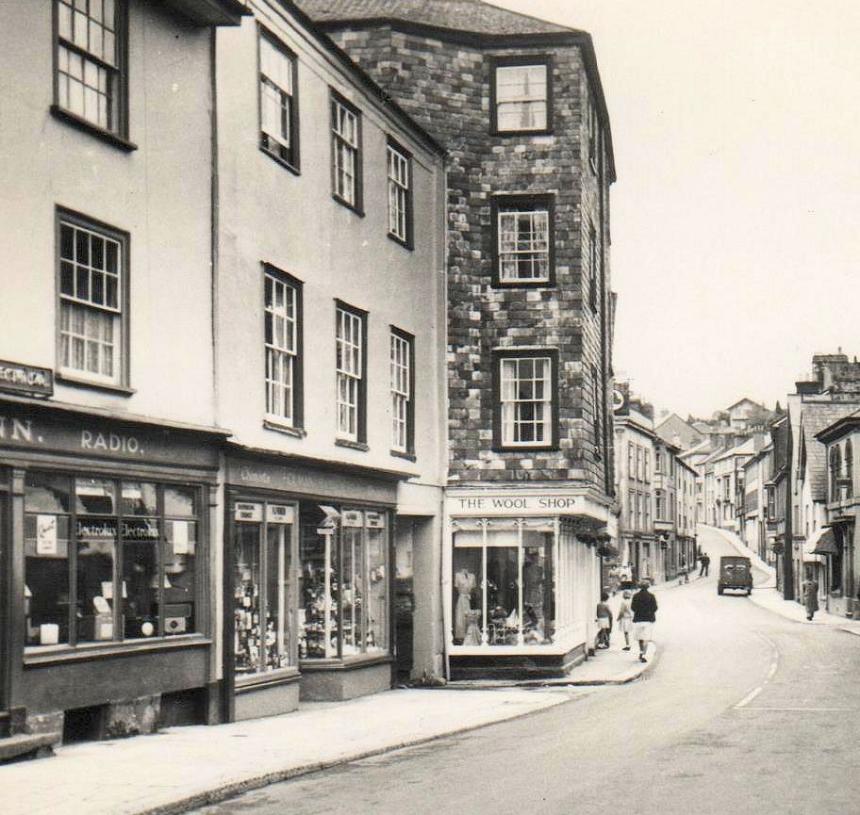 Above from left to right: M J Mann, Radio and electrical engineer; Holman Ham and Co.; The Wool Shop
From my own collection

The Kerslakes had a chemists at 44 East Street; the other chemist in the town was Holman, Ham and Co in West Street.

When I was 11 years old I attended Totnes High School - earlier generations who went there (or to the boys' school, King Edward the Sixth School) went on the train, Bulliver, but passenger services to Ashburton had ceased in 1958 (see http://www.southdevonrailway.co.uk/history for a history of the line). So we went on the bus - contemporaries or near contemporaries whom I remember are: Colleen Brixey, Shelagh Dent, Linda Paul, Alistair Macdonald, Brian Wright, Robert and Christopher Bray, John Furneaux, Peter and Susan Wakeham, Cynthia Fox and I believe Pauline Ash.
As a teenager I joined the Methodist youth club, held at the chapel in West Street; later I moved to the youth club in Stapledon Lane. There was a café with a juke box in East Street that was a great place for youngsters to meet: I'm told this might have been Jennings.

Ron's Café (Ronald Bonstow) was at No. 13, North Street. There were occasional mishaps with the catering: 'King Alfred again!' he would cheerfully announce.

The dual carriageway was not built until the 1970s – in the 60s the A38 was a single carriageway road that bypassed Ashburton. When prisoners escaped from Dartmoor, the police would erect roadblocks and stop traffic to search for the escapee. They would open car boots, or walk along the bus aisles looking for someone crouching behind the seats – probably alarming for adults, but for a child it was very exciting.

Two escaped prisoners were recaptured in Ashburton in January 1967. Boys playing around some barns near their homes spotted the men and reported what they had seen, and a young constable found them sitting on bales of straw.*****

My only real memory of the incident was of locals who had been near the barns in the previous week, who were thrilled to think that they had been so close to desperate criminals. As it was the middle of winter, and the prisoners must have spent days on the freezing cold, barren moor, I doubt they presented much danger.

*** In The Collected Letters of Thomas Hardy, 1926-27, vol 7, p67 it is said that Ashburton Police, at the instigation of James Mortimer, made 'inquiries' into Alfred John Hardy's claims. The inquiries do not seem to have deterred him.

For more on Chippy, see Crime and Punishment, under Ashburton in Peril.

****The Wool Shop also incorporated Foyles Library, where books could be borrowed for a small fee. Thanks to Jean Sergeant for this information - she used to work there. Presumably this was part of Foyles Library Ltd. See http://www.foyles.co.uk/about-foyles - Accessed 13-08-2014
***** Coventry Evening Telegraph, 2 January 1967, p25 col1
Believed to be in the Dolbeare area. From an Ashburton resident.