'The present Independent Chapel, situated in North Street, Ashburton, appears from the original trust deed to have been erected in 1739, on the site of a barn which had been converted into a meeting-house for the worship of God as early as 1712, it being so described in a deed of that date...
From the deeds, the property appears to have originally belonged to Thomas Glanvill of Exeter, fuller, and Thomas Sainthill, of Ashburton, clothier, who, November 15th, 1712, conveyed it to one John Comyn...'
Early Nonconformity in Ashburton, Edward Windeatt, Report and Transactions of the Devonshire Association, vol 28, 1896, p236ff

When Stephen Henry Burt Glanville died in 1898, the Exeter and Plymouth Gazette published details of his antecedents.

Sir John Glanville, of Broad Hinton, county Wilts, was Speaker of the House of Commons in 1640.
John Glanville, his son, was a Councillor-at-law, eventually occupying the Broad Hinton property. He married a daughter of Sir Edmund Fortesque, Kt., of Fallapit, and their younger son, Edward Glanville [ie the grandson of Sir John] came to Ashburton.
His great grandson, Thomas Glanville, was born at Ashburton in 1766.

[It cannot be the case that Thomas is the great grandson of Sir John - Edward, allegedly Thomas's father, seems to have died in 1738 at the latest. What seems likely is that Edward had a son Richard, who had a son Roger, and it was Roger who was the father of Thomas. See below].

Thomas became an officer in the Royal Navy, and was captured by the French. 'For many years [he] remained a prisoner, to the impoverishment and ruin of his family.'
Thomas's son, Thomas Glanville, obtained a post in the Dockyard at Plymouth, where he died in 1849 at the age of 60.
Thomas had three sons:
James Burt, who died in India.
Thomas Burt, who a member of the Cape Parliament, and afterwards Commissioner for the Cape Colony in London.
Stephen Henry Burt Glanville, 'who has just passed from our midst.'
Exeter and Plymouth Gazette, 21 December 1898, p3 col5

The Wiltshire connection.
Sir John Glanville
'About 1615 he married Winifred, daughter of William Bouchier of Barnsley, Gloucestershire, by whom he had seven children, including four sons: William, who succeeded to his estates; John, a barrister; Francis, who fell at Bridgewater during the civil war on the king's side; and Julius.'
https://en.wikisource.org/wiki/Glanville,_John_(1586-1661)_(DNB00)

The National Archives hold a marriage settlement of William, son and heir of Sir John Glanville, with Frances, daughter and heir of Sir Henry Gibb, in 1653.
Ref 212B/746, http://discovery.nationalarchives.gov.uk

William Glanville, who died in 1680, left no surviving male issue.
Francis Glanville, second son, lieutenant-colonel in the Royal Army, was killed at the siege of Bridgwater in 1645.
John Glanville, third son, barrister-at-law, succeeded his brother at Broadhinton. He married Catherine, the daughter of Sir Edmund Fortescue, of Fallopit, Bart., by whom, with other issue, he had two sons, John and Edward Glanville, who at his death in 1738 left numerous descendants, who mostly resided at Ashburton, amongst who was Thomas Glanville Taylor, Astronomer, F.R.C.S., F.R.A.S., etc
Ancient Westcountry Families and Their Armorial Bearings, B H Williams, Penzance, 1916 pp97-100. Information from partial transcription on http://www.glanvillenet.info/glandir.htm

Julius Glanville, of Ham, Kingston-on-Thames, son of Sir Jn G., made a will in 1702 which was proved in 1709.
He left various properties and lands, including something at Broadhinton, to his son Jn. G. Other children mentioned are Julius, Ann and Winifred. The will is held at the Cornwall Record Office.
http://discovery.nationalarchives.gov.uk/

Richard Glanvill and Elizabeth Sainthill were married at Ashburton in August 1722
Richard was possibly the Richard baptised in January 1703/4, the son of Edward Glanvil.
Elizabeth was probably baptised in April 1701, the daughter of Symon Sainthill.
Parish records

Roger Glanvill married Mary Teddy in April 1765 in Ashburton; both were of the parish. One of the witnesses was Richard Glanvill.
Parish records

Mary Glanvil, the daughter of Roger and Mary, was baptised on 14th February 1768 at Ashburton.
Parish records

Mary Glanville, of the parish of Charles, Plymouth, married David Hele, 'a labourer' on 15th October 1794, at Stoke Damerel. David was of the parish.

'John Hele, the son of David and Mary Hele, was born at Plymouth Dock in 1801, and baptised at Stoke Church, Plymouth. His father was a native of Sandford, Crediton, Devon...David Hele served his time to the trade of a thatcher, in Sandford, and had two sisters, who were married at Sandford, one to Mr Webb, a tailor, and the other to Mr Greenslade, of Shobrooke. Mary, the wife of David Hele, was born at Ashburton, in the county of Devon, and was the daughter of Roger and Mary Granville; her father was in the woollen trade, and carried on a large business at Ashburton, having many combers in his employ; had two sons, Thomas and Roger, and two daughters, Mary and Elizabeth. Mary married David Hele, and Elizabeth married Thomas Taylor, of Bickington, near Ashburton, who was an astronomer, and lived for a great many years at the Observatory, Greenwich, near London. Roger Granville the younger married Miss Willcocks, of Buckfastleigh, and worked at the wool-combing business for his father until his death.* He had two sons, Thomas and Richard. There were other relations in Ashburton, among them Miss Glanville, an independent lady, and her sister, Mrs Adams.
Mary Glanville was married at Ashburton to David Hele, who went to live at Plymouth Dock, now called Devonport, and kept for about seven years a large hotel, horsing the mail from Devonport to Plymouth and Exeter.
Reminiscences of John Hele, of Alphington, Devon, John Hele, Exeter, 1870, p1
*This is incorrect - John may be confusing Roger with a Richard of an earlier generation who married Ann Willcocks 22nd March 1761 at Stoke Damerel.
Roger Glanville the younger married Susanna Angel in 1803.
Parish records
In 1851 Roger Glanvill, 69, and his wife Susanna, 70, were living in West Street. Their 41 year old unmarried son, Richard was living with them - he was a master tailor. All three had been born in Ashburton.
1851 census HO107, piece no. 1871, folio 268, p19
'I know for certain that my ancestor Roger married Susanna Angel because the Angels owned and passed on lots of silver items. Until two generations ago the whereabouts of a few of them, including a sugar bowl in the shape of a Roman helmet, were known to the family. They were always referred to as the 'Angel silver', but sadly I have had no success tracking any of it down.
Roger and Susanna's eldest son, Thomas, moved to Exeter then Clerkenwell, Middlesex, in the 1850s. The Glanvill tailors shop on Jerusalem Passage survived for almost a century, despite Thomas being a Baptist preacher and really only moving to London because of 'a calling'. Thomas had 'A native of Ashburton inscribed on his grave marker. Several generations later, many descendants still live just a few miles from Clerkenwell.'
Many thanks to Rick Glanvill for the above information.
Rick can be contacted at:

47 year old Thomas Glanvill is a widower in 1851, living in St Thomas, Exeter, with his three sons and daughter Sarah. A tailor, he was born in Ashburton.
1851 census HO107, piece no 1867, folio 86, p25
In the 1861 census for Clerkenwell, London, 57 year old Thomas Glanvill is living with his son, also Thomas, at 11, Jerusalem Passage. Thomas snr., a widower born in Ashburton, is a tailor.
1851 census RG09, piece no. 190, folio 54, p6
Susanna Glanvill, of the parish of Plymouth St Andrew, and Thomas Taylor, late schoolmaster of The Minotaur, were married by licence 26th March 1802.
Plymouth St Andrew Parish records

1812 Harriet Taylor, daughter of Thomas and Susanna, was born in Clarks' Buildings, Greenwich, Kent on 28th March 1812. The non-conformist record gives the information that Susanna was the daughter of Roger and Mary Glanvill.
England and Wales Non-Conformist births and baptisms, available through https://search.findmypast.co.uk

See Remarkable and interesting people, under Famous Ashburtonians, for information on Thomas Glanville Taylor, the son of Thomas and Susanna.
*** 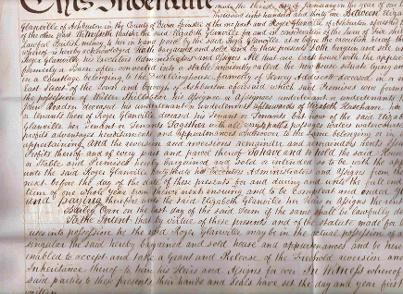 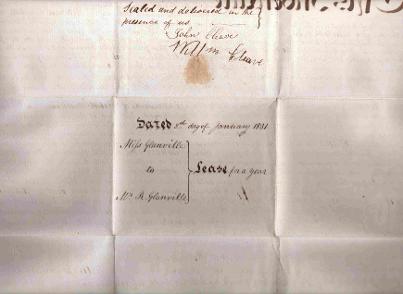 1831 lease of a property in East Street

Roger was probably baptised December 1781 in Ashburton, the son of Roger and Mary Glanvill, and is probably the same Roger Glanvill who married Susanna Angel in 1803.

In the 1861 census he was a 79 year old widower, living with his son Richard in West Street.

Elizabeth may have been his elder sister, baptised in March 1770

Many thanks to Linda Phillips for the above document