How many pupils did the schools attract ? In 1932 the High School had 6 resident mistresses and in 1935 boasted accommodation for 100 girls including 40 boarders  In 1936 The Wilderness had 40 pupils – an advertisement emphasized that with 4 teachers, this meant that there were 10 pupils to every master. (Western Morning News 6 January 1932 p3 col6; Kelly's Directory of Devonshire 1935; Western Morning News 15 April 1936 p3 col 4).

Maureen Daymond's class, below, consisted of 8 pupils in 1936 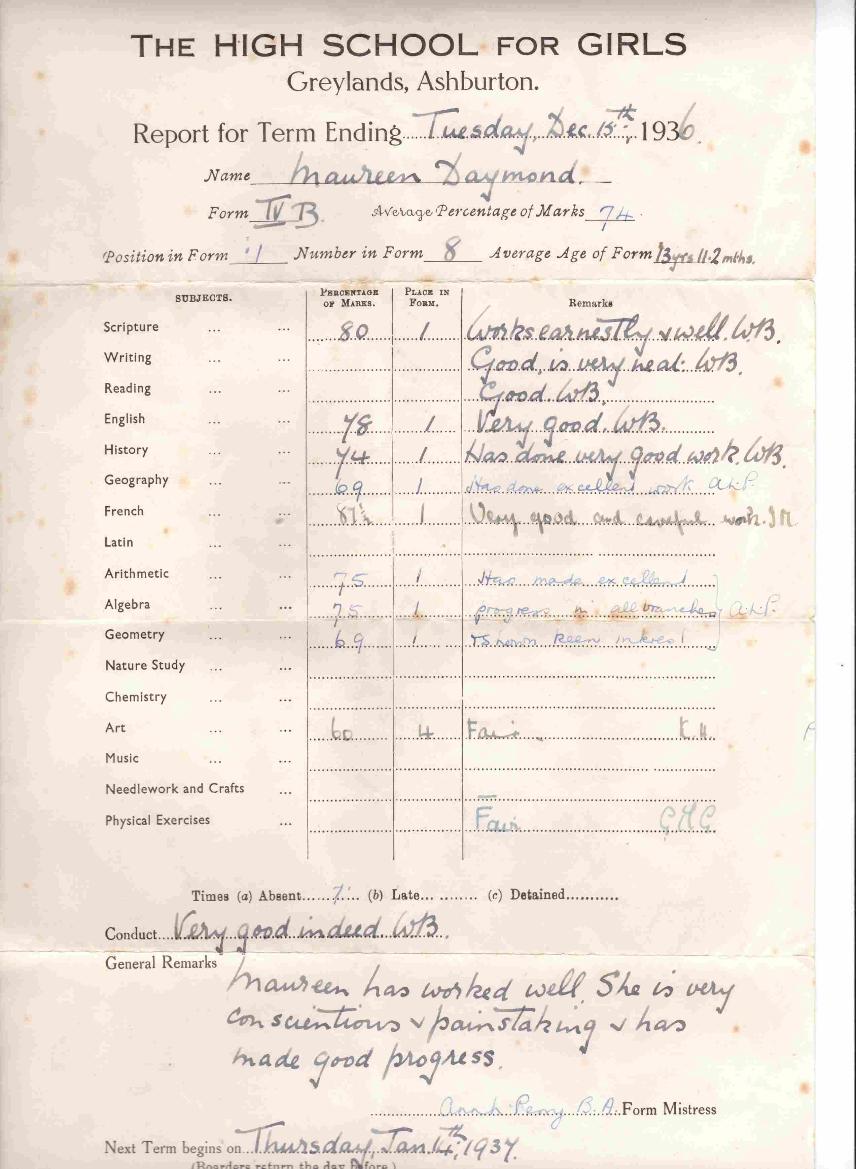 Above: Maureen Daymond's report from the autumn term of 1936. Ann L Perry is the form mistress, W Bowler (at the bottom of the page, not on this image) is the Principal.

Thanks to Maureen Daymond and also Ruth Westall for this image.

At other times it was stated that the schools were 'quite full', although we might be suspicious that this was a very modern marketing ploy, designed to create demand. The Headmaster was certainly capable of capitalizing on any opportunity – in 1941 he made much of the fact the the centenary of the school boarding house was imminent, and offered two scholarships to mark the occasion. He was referring to Ireland House, given by Dr. Ireland to the Grammar School in 1841, but neglected to mention that The Wilderness School had been in existence for less than a decade. (Western Morning News 22 July 1941 p1 col 5).

Seven years earlier a prospective parent might have been impressed with the fact that the number of pupils at the two schools had more than doubled since July 1932 (Western Morning News 3 November 1934 p3 col 4) they might have been relieved that there was still 'excellent accommodation for a few more boarders'. But W S. Graf states that in 1932 the new Headmaster at the Grammar School did not take up his appointment until September of that year, and it seems certain that Henry Naylor was only just leaving his post in July, as the school holidays began. If this was the case, the Wilderness School did not even exist until at least the autumn (probably not until the following spring) – so it is perhaps not surprising that in 1934, with two schools, the numbers were more than double than in 1932, when there was one.

Some of the innovations and revivals that the headmaster had brought into the Grammar School were continued in the private schools – A house system (Greylands had the three houses of Stapledon, Ireland and Gifford, The Wilderness seems to have had two) a school magazine, Speech Day, drama, a debating society.

The curriculum included maths, physics and chemistry, scripture, and sports including football and cricket for the boys, tennis and hockey for the girls (Heather Woodley remembers playing hockey up at the Balland Lane fields). Modern languages were claimed to be a speciality. All these apparently contributed to an 'upbuilding of character and tone', as was claimed in 1938. (Western Morning News 13 April 1938 p13 col 5)

They may have developed character and tone, but for many pupils, their schooldays were not their happiest. But boys will be boys and there obviously were lighter moments – Sandy Smith of The Wilderness recalls that pen nibs were embedded in the rafters of the schoolrooms. In the first year of the school, Allan Rogers of The Wilderness (presumably a pupil) was fined ten shillings at Totnes County Sessions for aiding and abetting Charles H Naylor (the headmaster's son) for using a motorcycle without insurance, and without a pillion seat. 'It was stated that when stopped at Buckfast Abbey Rogers was sitting on a tea cosy' (Western Morning News 12 December 1933 p11 col 7 )

Henry's son was about 18 years old at the time of this incident - presumeably his punishment was not that inflicted on younger boys when Ashburton College moved to Newton Abbot. The technique there seems to owe much to Mr. Naylor's bowling days on the cricket pitch, as Chris Nicola remembers: 'It was a case of putting ones head under the door knob, so you couldn't lift up, trousers and underpants around your ankles, so you couldn't go anywhere, then he ran from his bedroom through his study with his cane held high and when he reached his target down came the cane' (John Oakford's website http://ashburtoncollegeoldboys.blogspot.co.uk/)

Not only will boys be boys, but girls will be girls – Jim Parnell, an Ashburton boy in the 1930s, tells the following story:

'As for Greylands, well I and a couple of other lads were quite expert with pea-shooters, and one of the places to get the ammo to fire in them, were the berries in the ivy that grew on the wall at the bottom of Greylands, near the tennis courts where the gals would play. They would deliberately hit the ball over the wall and us lads would meet them in Hare's Lane for a little chat etc.Many a friendship came from such meetings.

Every Sunday the Greyland gals would come to St Andrews church, to the regular pews allotted to them..many a wink was exchanged with the boys in the choir. Two of the girls I remember were Mary Hunt and Joan Taylor. The girls were always dressed in their uniforms and looked very neat ' .

As a child, Heather Shilstone thought it was an excellent school - she concedes that it may not always have been the best academically, but she loved going there. She does remember Miss Page Brown and Miss Walker Brown as being excellent teachers. She thought it a very happy school, and remembers the gardens with fondness 'There was a swing near the large tree, and bamboo all down one side of the grounds'.

Unfortunately, some stories connected to the girls of Greylands are not so pleasant. In later years, Hazel Bray recalls a girl from the County School (i.e. the Primary School)  who desperately wanted to go to Greylands. Eventually she got her wish, but was taunted with the name 'Council School Rat'. In those days ink for pens was kept in inkpots or inkwells, and the girl in retaliation threw the ink over the tormentors. Her dream of being at Greylands did not last long – she was expelled. 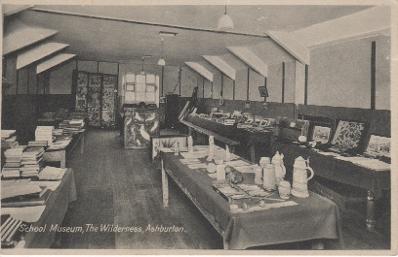 Mr. Naylor had purchased the old fire engine from the Urban District Council in 1935. It cost him a guinea.

After Mr. Naylor moved his schools to Newton Abbot, Bill Spry recalls that the fire engine remained on a sports field at Dolbeare. 'It was one of those that you had to get a horse to pull. Jimmy Guest, Les Townsend and I used to go and play on it'. Bill believes that the engine was eventually used for scrap.

The school had its own museum – in an anonymous article in The Wilderness Magazine, artefacts are described that any curator would be proud of:

*Coins and tokens including an Elizabeth shilling and silver penny, an 'Aysheberton Halfe Penny' of 1668, a Sheffield penny and a George 11 half guinea (1717) 'recently dug up at the Bull Ring'.

*Engravings including two or three of the old Market Hall, photos of 1876 onwards, including one of The Wilderness with boys snowballing in front of it, and young monkey puzzle trees in the background.

*A 1610 John Spede map of Devon; a geographical screen 'entirely covered with maps dated 1777 and earlier' The map 'of New Holland (Australia) was published long before the discovery of Bass Strait, so that Van Diemen's Land (Tasmania) is shown as a peninsula, not as an island'.

*An old board carved with the names of boys who boarded in Ireland House from 1845 onwards.

*An old fire engine, kept in a separate building, of the same date.