'Ordered, that leave be given to bring in a Bill for making a Railway from Ashburton, in the County of Devon, to join the South Devon Railway at Newton Abbott, in the same County; and that Sir John Yarde Buller, Mr Gill and Mr Matheson do prepare, and bring it in.'

Private Bills (which became Acts when passed by Parliament) were designed to mediate between the promoters of private projects - eg railway lines - and the people who might be affected by them. One factor that might be taken into account was whether the project was in the public interest.

See the Living Heritage section of http://www.parliament.uk for more on Private Acts and the role they played in establishing roads, railways and canals. 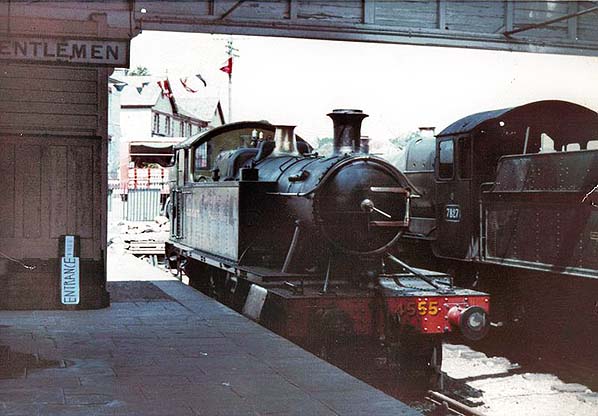 The Ashburton Newton and South Devon Junction Railway Company was registered between 1844 and 1856, and either dissolved before 1856 or re-registered by 1860

Board of Trade and successors

James Matheson, MP, was on the committee, as was, amongst others: the Portreeve, the vicar, and the Caunter brothers, John, Richard and Henry.

In January 1849 the Ashburton, Newton and South Devon Railway held their half-yearly meeting at Ashburton, and decided to delay construction of the line until the summer. The engineer's report stated that the entire line, 11 miles in all, was marked out, and it was estimated to cost £103,250.

'Before the opening of the railways, it was a great thoroughfare for coaches, vans etc.between Plymouth and London.......

........(it is) about 7 miles W by S of the South Devon Railway Station, to which a branch line is projected...but not yet commenced'

1850 The high cost of transportation by railway resulted in a large proportion of goods being moved by screw steamer from London to Plymouth, and then up to Ashburton by carrier.

1864 saw the first meeting of the new Ashburton Highway District Board.

1852 Plans to build a railway line between Ashburton and Newton Abbot were abandoned. 'They will yet see their error'

*When Mary Ann Yolland died in 1888, she held, amongst other securities, one share of £20 in the Teign Valley Railway Co. It was declared valueless at probate.

1867 The Exeter and Plymouth Gazette made a plea for at least one of the two main clocks in Ashburton to be set at the correct time. Neither of them, the newspaper complained, agreed with railway time, making life particularly difficult for those travelling the eight miles to catch a train. 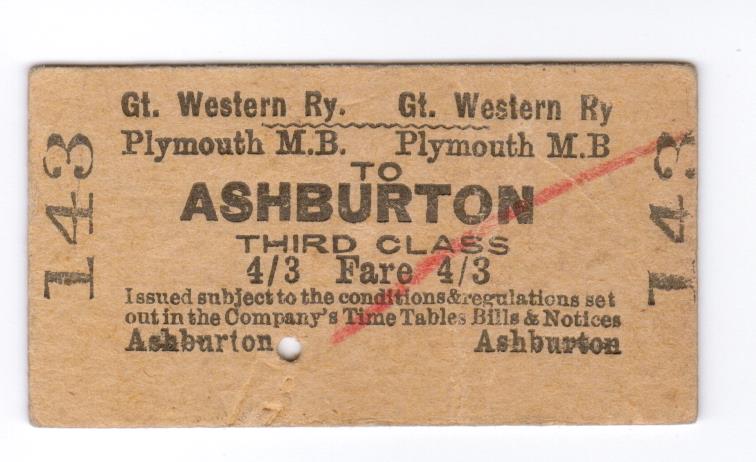 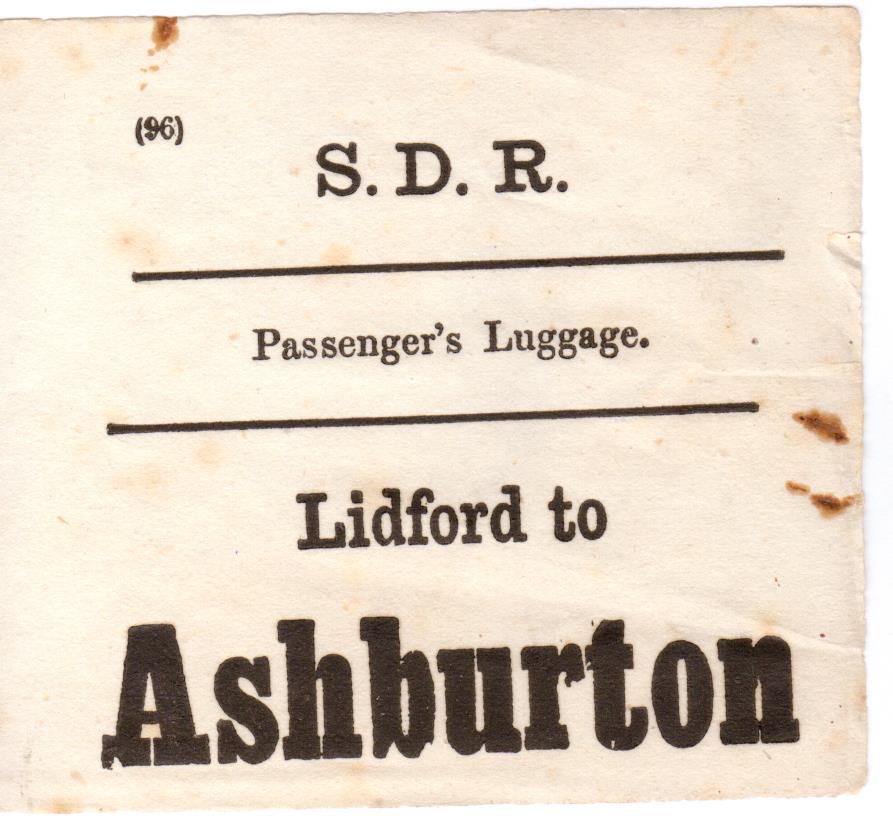 In 1870 The Exeter and Plymouth Gazette reported on some of the works necessary in connection with the new railway. A cutting 5ft 8in deep had to be made in Prigg Meadow, where the railway station was to be built. The excavated material was deposited in the adjoining Cann Meadow, where the level needed to be raised.

The course of the river Yeo was diverted where it ran from Prigg Meadow into Cann Meadow, and water pipes conveying water from Chuley into the town were moved. The rails still went over some of these pipes, so a manhole had been fitted in case repairs were ever necessary.

The town sewer emptied into a large pond beside the station, and this could not be stopped.

Alterations to the parish road to Staverton were causing some problems: the corner by the Gas Works was very sharp, and blasting would have to be employed at the end by Chuley House.

The new line to Ashburton was inspected in April, by sending a train along it drawn by the heavy Hero engine. Engineers and contractors were aboard, testing that all was well. A large number of people watched the train arrive at Ashburton Station.

'Yesterday the inhabitants (of Ashburton) were connected with the outer world by the advent of the iron horse.'

£110 was collected to pay for the occasion, which was marked by the shops being shut, flags flying, triumphal arches being constructed, and trees being planted either side of the main streets.

Loud cheers greeted the engine, decorated with flowers and flags, as it approached. A select number of people lunched at the Town Hall, following a procession, but later there was a 'monster tea' in the market place for about 1,500 people. 'Rural games' were played in a field next to the station, including donkey racing and climbing a greasy pole - the incentive to attempt this was a leg of mutton, hanging from the top.

1873 An argument arose as to whether the Rose and Crown Inn should close at 11pm local time, or conform to Greenwich time, which was kept by the railway. An appeal was set to be heard at the Quarter Sessions.

On Sunday 11th July a porter telegraphed Buckfastleigh to ask if the line was clear. The message did not get through because a tree falling across the line had also brought down the telegraph gear. Getting no reply, the porter eventually sent a train from Ashburton, which then ran into the tree.  Two front wheels of the train came off the line, but no other damage was done.

1877 Richard Moore, of Ashburton, died suddenly on Totnes Railway Station platform, whilst waiting for a train. He died on Thursday - the inquest was held on Saturday in the waiting room. The verdict was 'Disease of the heart or other visitation of God': the jury gave their fees to the widow.

1878 Richard Preston, East Street, is shown as the agent for goods and parcels for the Great Western Railway.

John Harris is the Station master

At the end of March 1900 John Smerdon retired after 40 years service with GWR. He had spent 28 years as guard on the Totnes to Ashburton branch. He was presented with a pipe engraved with his monogram, a walking stick and an engraved silver band. Later, at a meeting of the townsmen at the London Hotel, he was presented with a purse of sovereigns.
Western Times 8 May 1900 p3 col5

'The train service was good, a penny a mile third class, 17/5 to Paddington; but to go to Newton (eight miles away) one had to go nine miles to Totnes first and this made the journey expensive. The station master, Mr John Harris, and the guard, Mr Smerdon, wore fine blue uniforms with frock coats and peaked hats. Dignity was theirs. The train stopped just before reaching the platform in order that a porter might collect tickets.'

1903 £100 was raised to recognise the service of the late John Harris, who had been stationmaster at Ashburton for over 30 years.

'Ashburton was the terminus of the GWR branch line which ran to Totnes. Four or five trains each day went to Totnes and back. Most trains, when they arrived at Ashburton, were met by two conveyances, one from the Golden Lion Hotel and the other from the London Hotel. Commercial travellers who called on the local drapers would bring with them by train very large wicker hampers containing articles of clothing etc., which they would exhibit to their prospective buyers. Five minutes before the departure of each train from Ashburton, a porter would come outside the station and ring a large bell which, in effect, meant "get moving" to any intending passenger who may be on his or her way.'
From the reminiscences of Reg Andrews, born 1893. Many thanks to Dave Hodge-Brooks and Ernie Smerdon for passing these on. 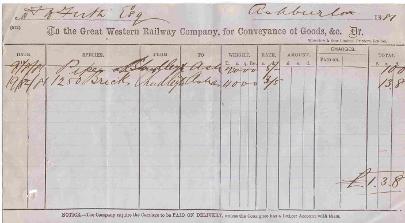 Above: Receipt from the Great Western Railway Company, for conveyance of Goods etc. In this instance solicitor Mr Firth has paid for conveying pipes and bricks from Chudleigh to Ashburton, at a total cost of £1 3s 8d. The goods were heading for Holne Park in 1881.

Some Ashburton residents working on the railway - from the 1911 census

In 1912 there was a long discussion during a meeting of the Ashburton Urban District Council concerning the lack of a train on Sundays. It was 'a great inconvenience to naval men and others in the neighbouhood.'

Reginald Eales, of Cullompton, died in August 1925. Amongst his colleagues present at the funeral was Mr Burgess, the station master at Ashburton.
Western Times 14 August 1925, p10 col2
In 1925 Frederick James Burgess and Florence Mabel Burgess were living at Albany Cottage, Ashburton.
1925 Register of Electors. 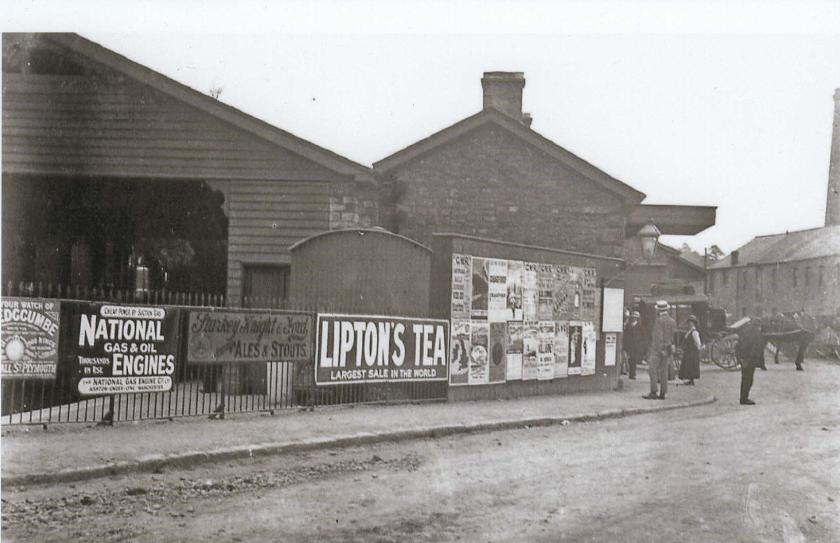 Above: The north side of the station.The fashions suggest a date from the early 20th century
From my own collection 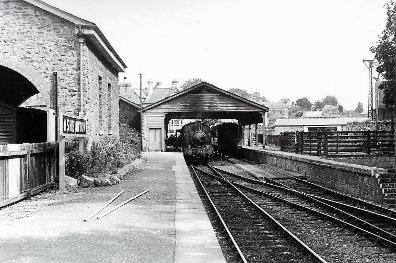 Above: View of the station showing the town's name on the left and the cattle enclosures on the right.
Cattle were not the only other passengers on the trains. A label addressed to the Station Master at Ashburton Station shows that live pigeons were being transported. The instruction was 'Please liberate (weather permitting) clear of wires or other obstructions. If weather is wet or foggy, please return Birds and Basket to sender.' The basket had come from Haimes and Cook, Devonport Station.
Item sold privately. Not in my possession. 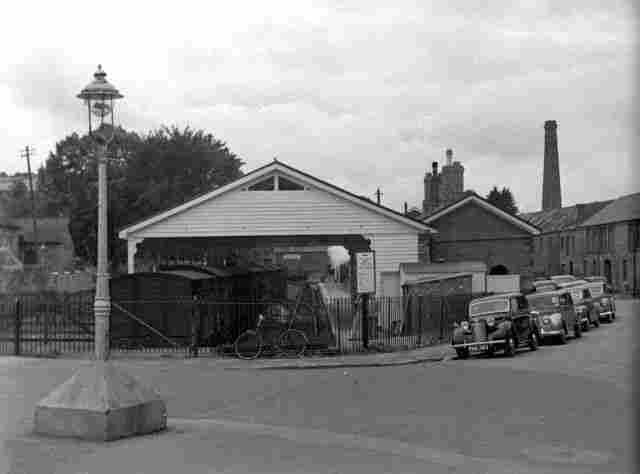 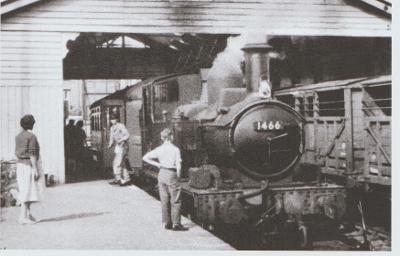 All photographs above from my own collection 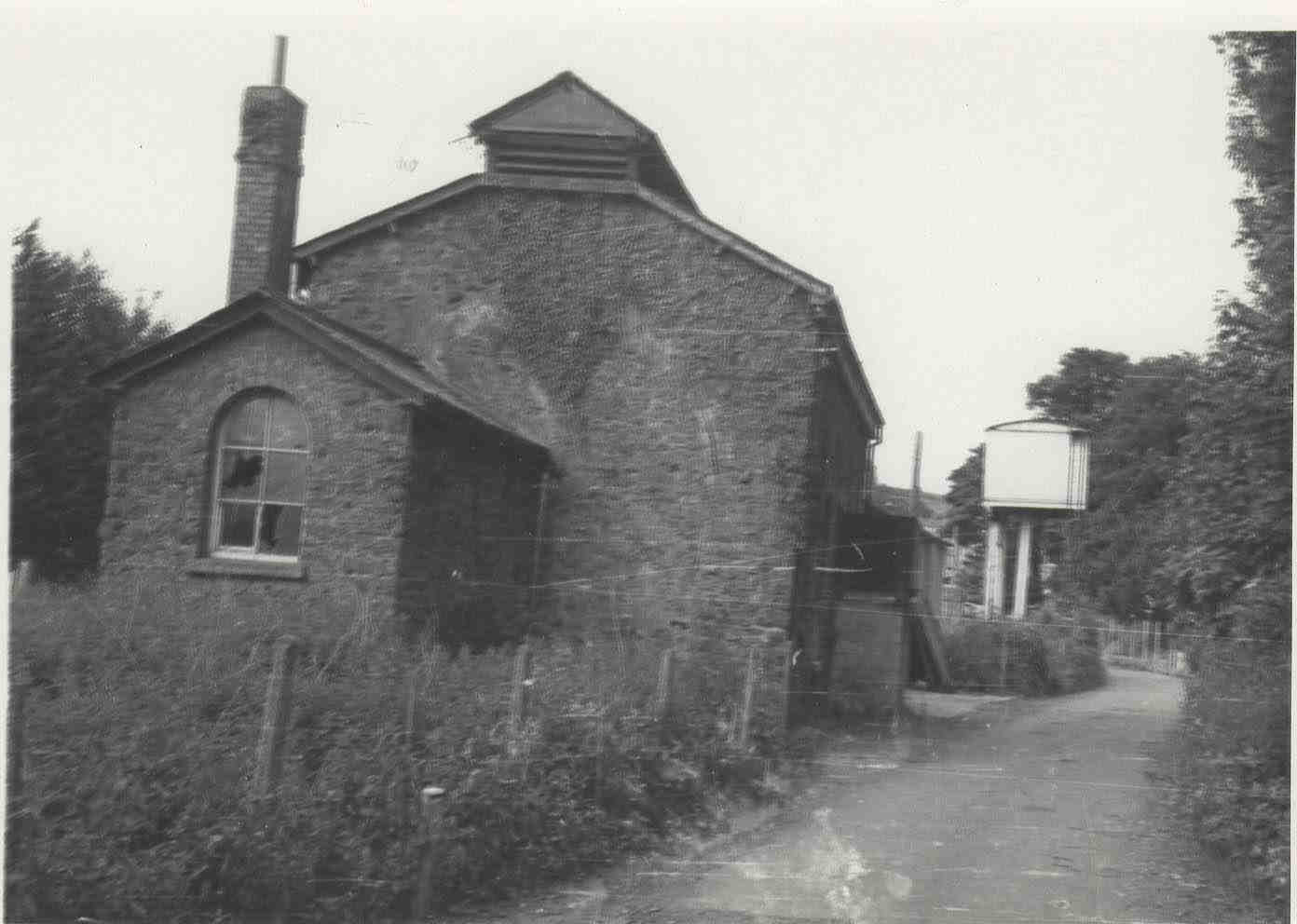 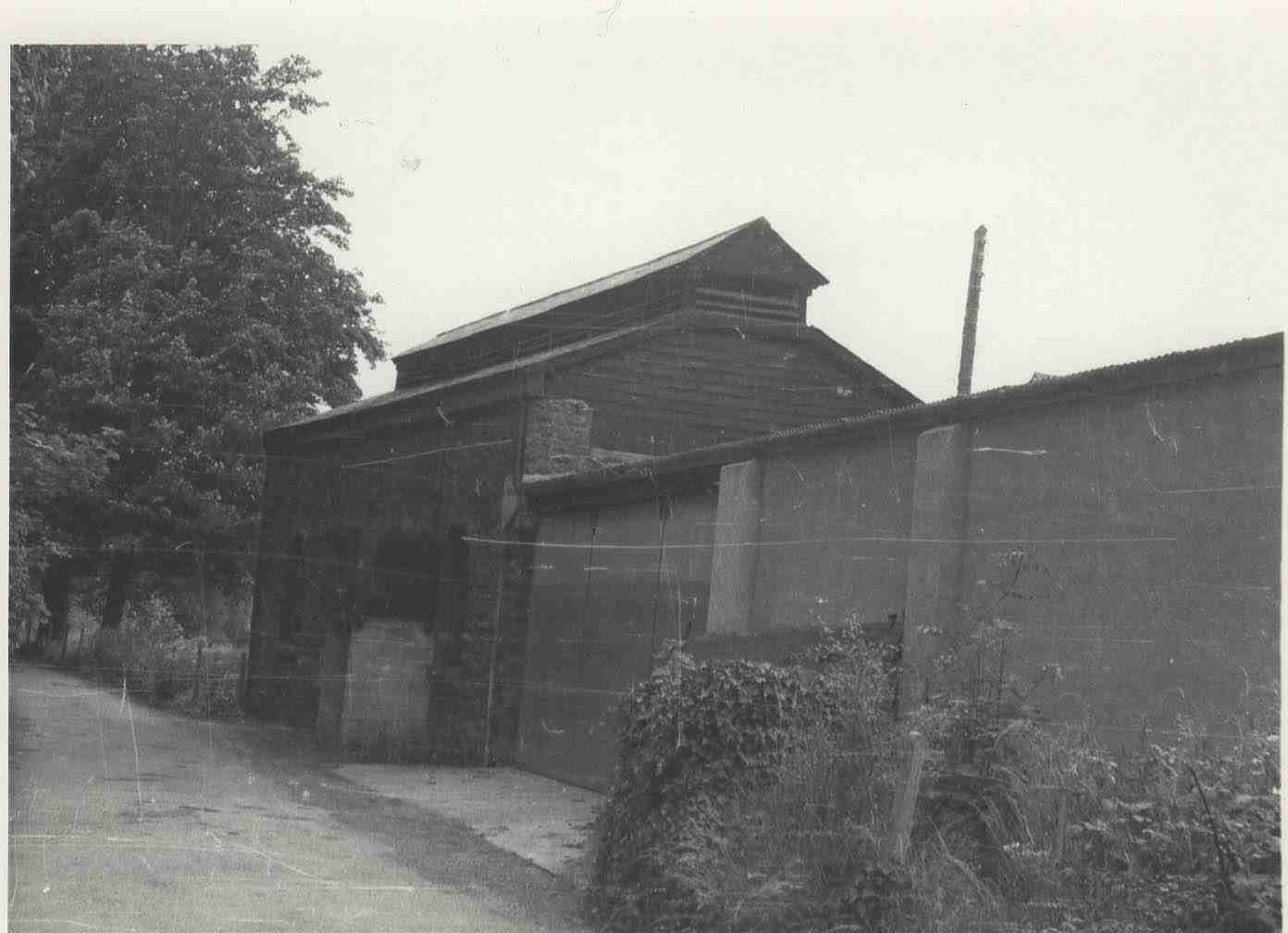 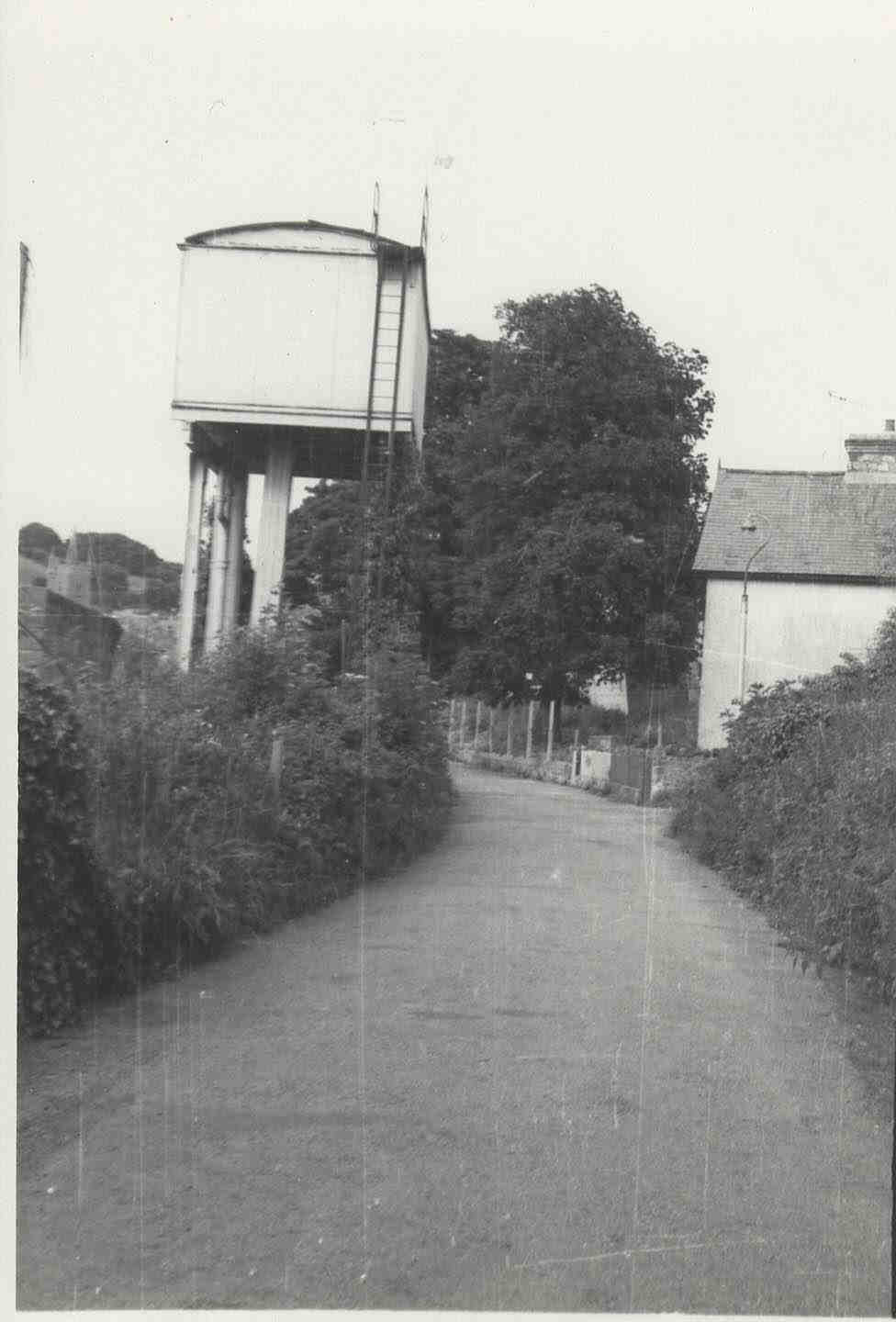 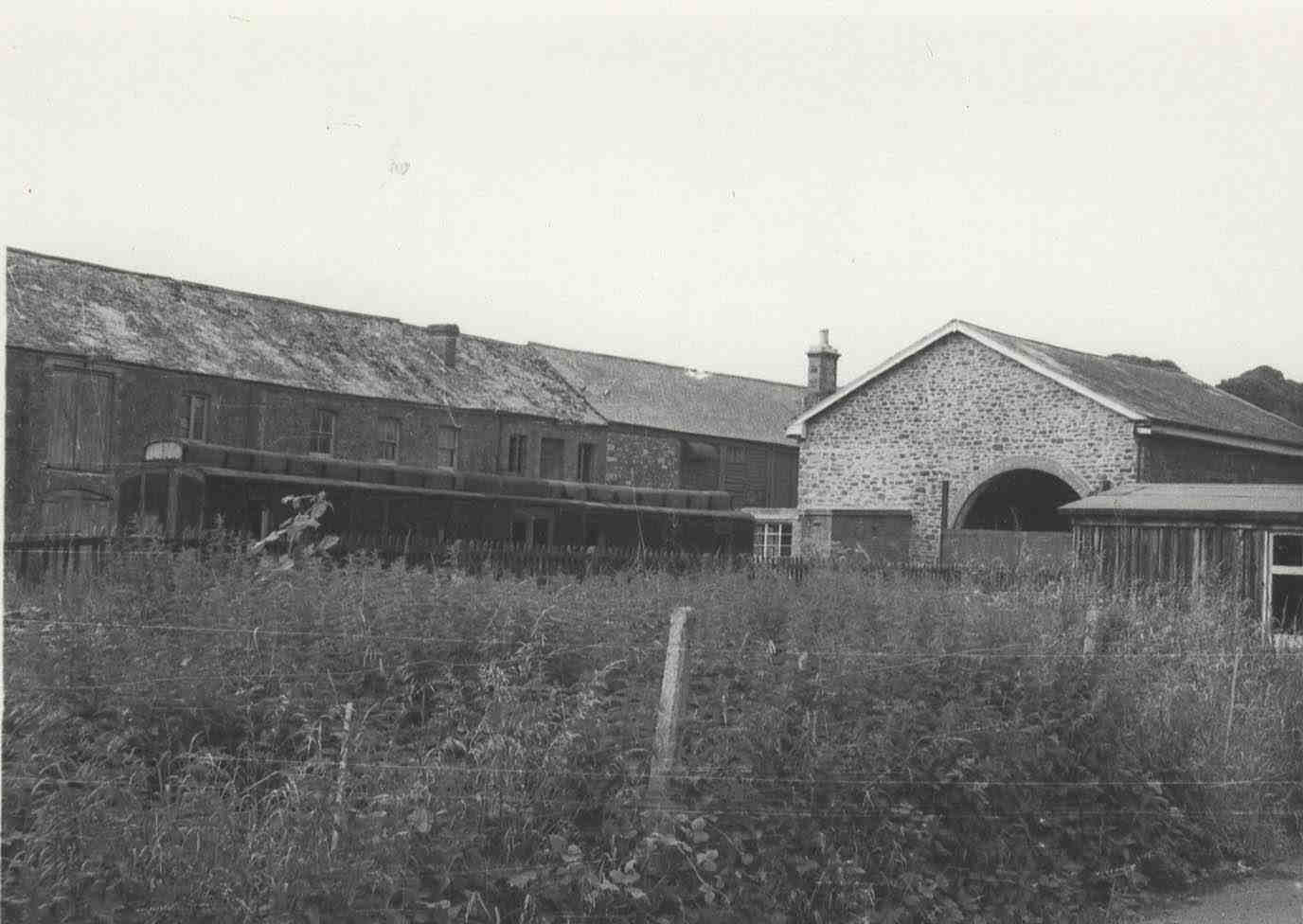 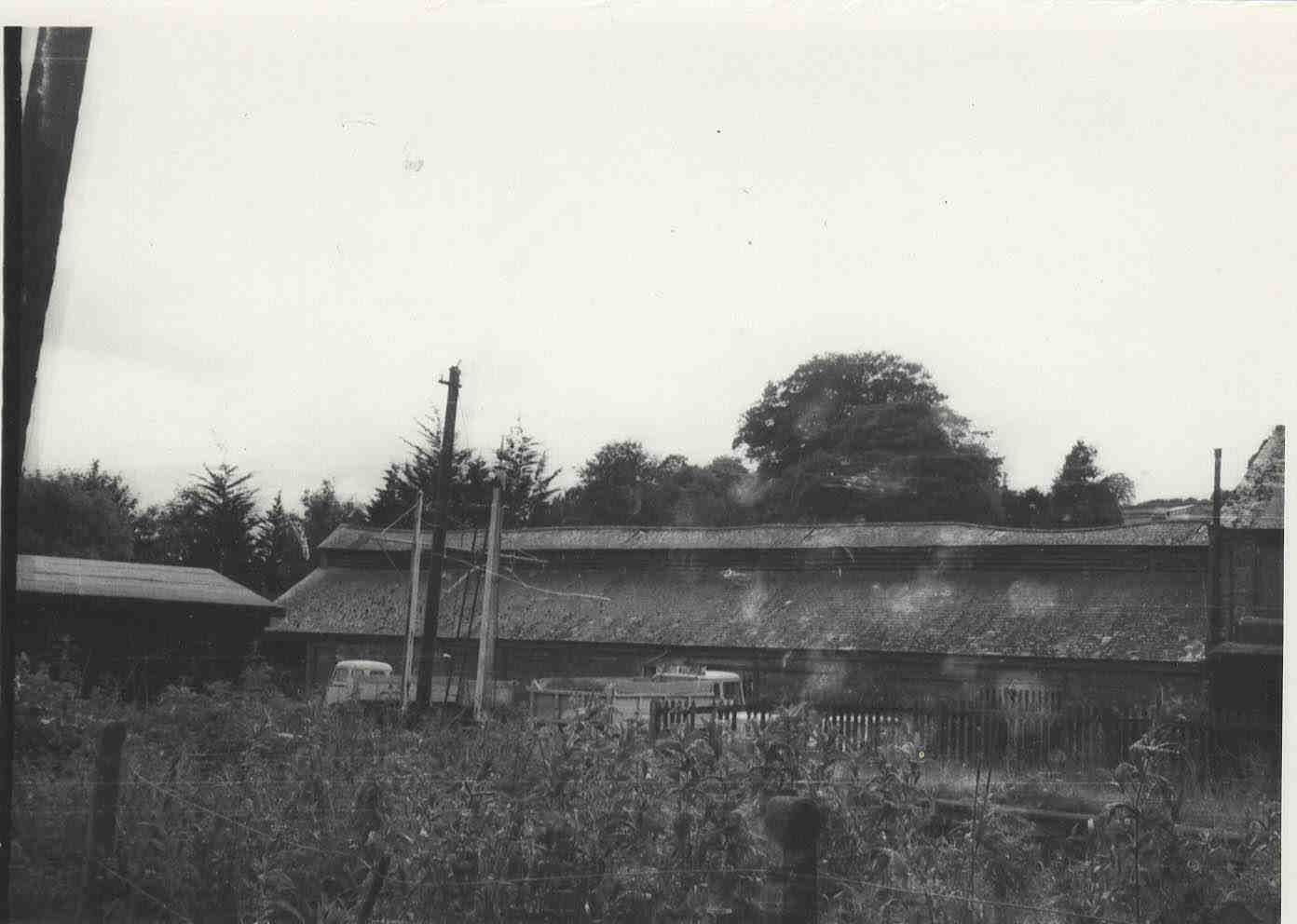 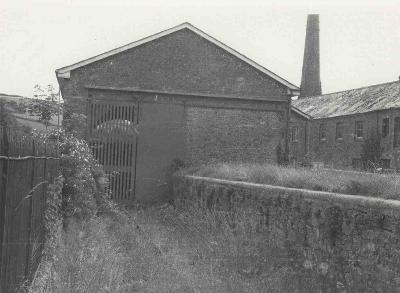 Above and below: Ashburton Station 1964
From my own collection. The photographs are
© R A Ganderton, to whom many thanks for allowing me to use them on this website 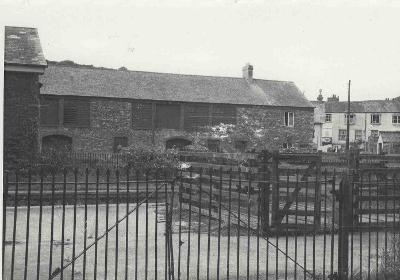 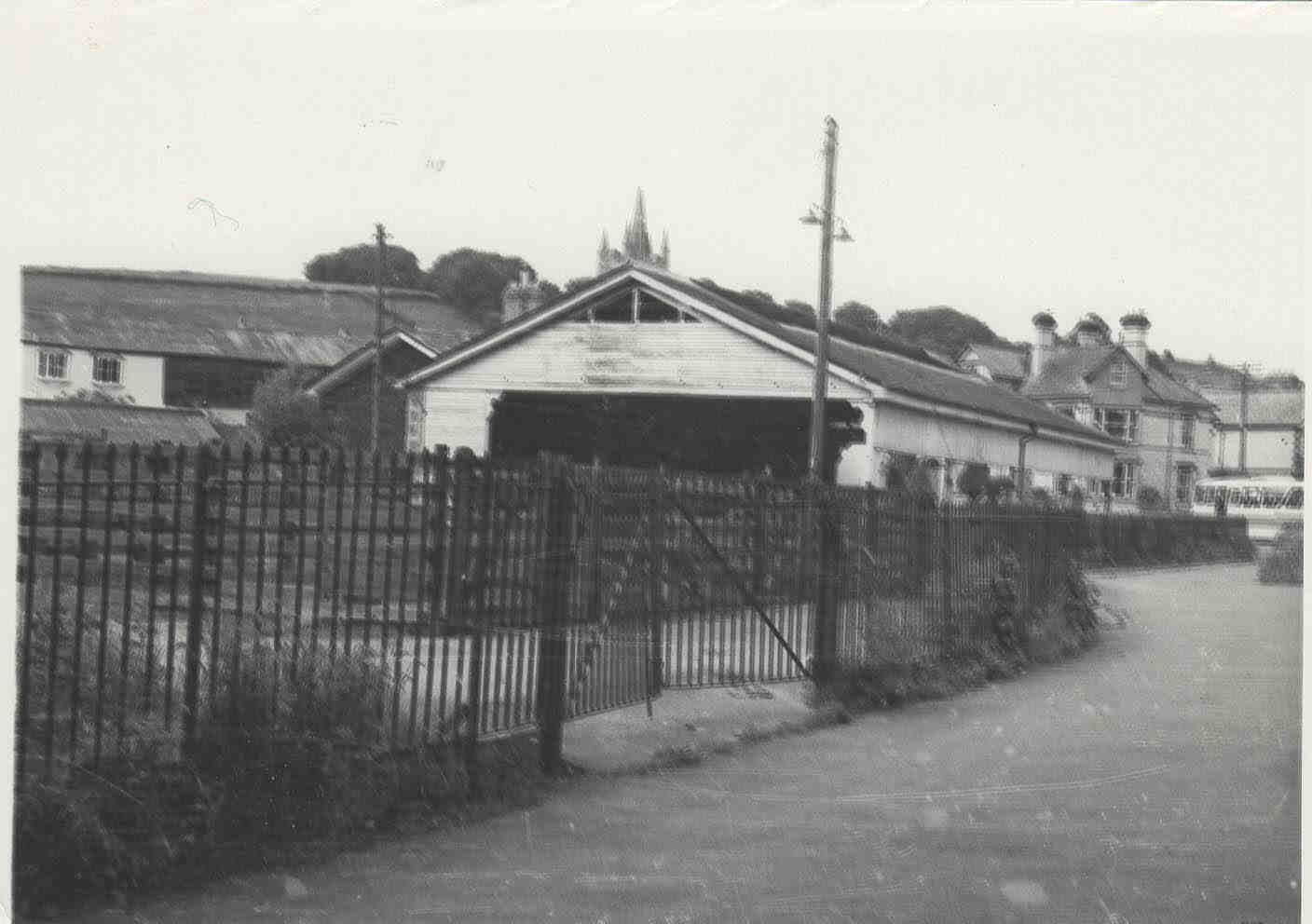 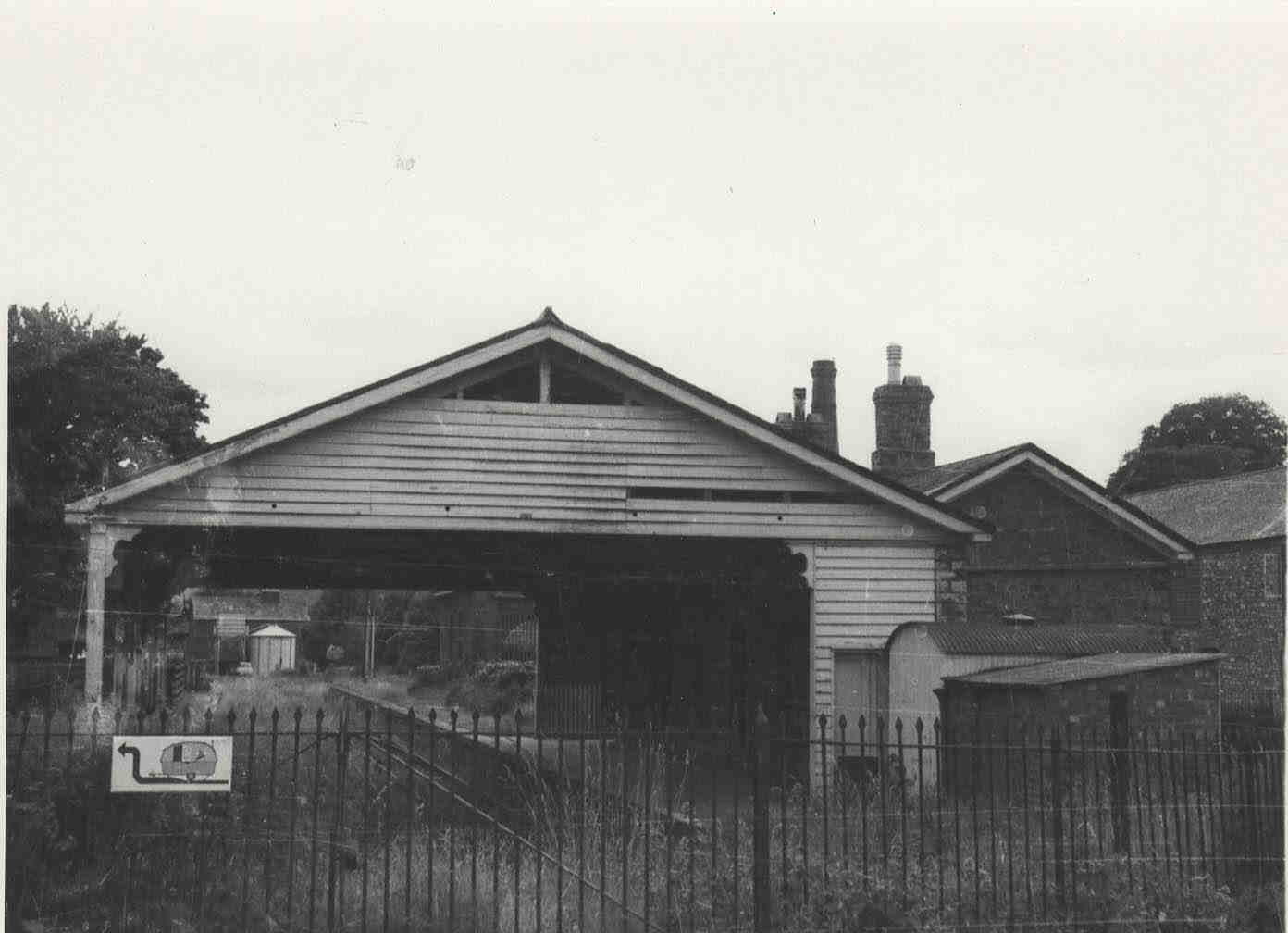 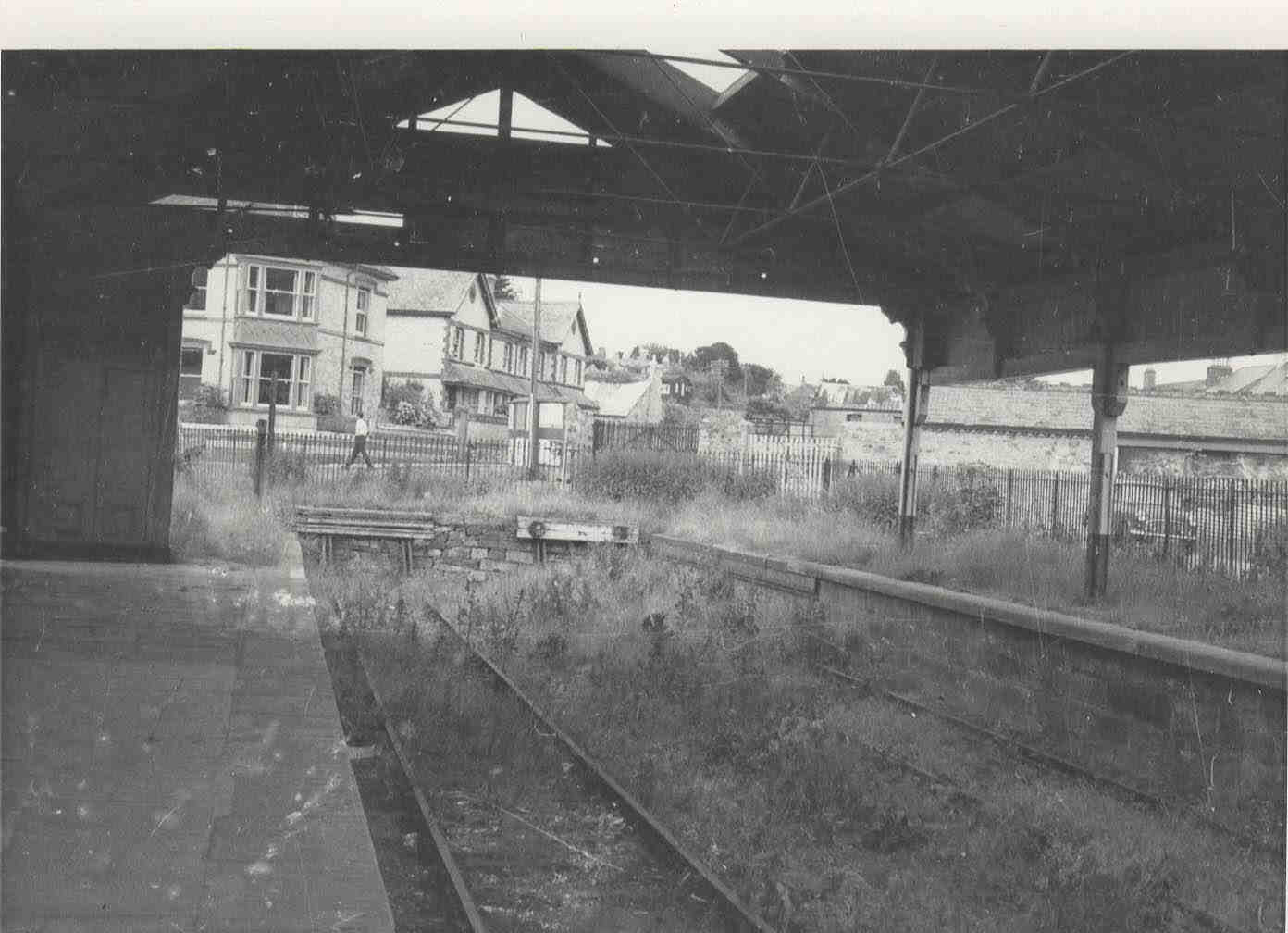 'When you went into the building, the ticket office was on your right...there was luggage on the left, smelling of leather.' (Ashburton resident) 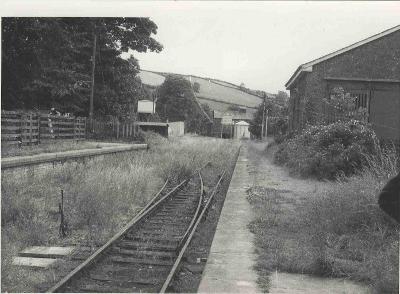 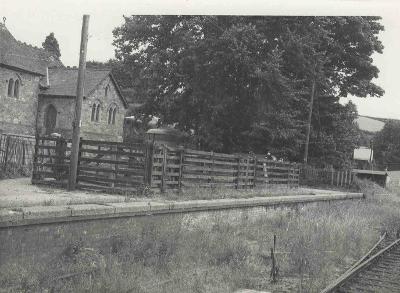 'I was always playing on the tracks or at the station because I would start off in the park next to St Andrew's, cross the stream and end up on the tracks....'
Many thanks to Roy Martin

'I have just recalled the last run of the Ashburton Flyer. This engine, known as Bulliver, was in fact one of my earliest experiences since I had been born in Ashburton and we used to be taken to see it and its driver, Mr Cartright. There are many tales of this train, such as going back when someone had forgotten their sandwiches, and the one about the cat that lived in Ashburton but liked to visit Totnes every day, returning by the afternoon train, of course. If it wasn't sitting on the platform they would wait for it.'
Many thanks to Charles Bazalgette 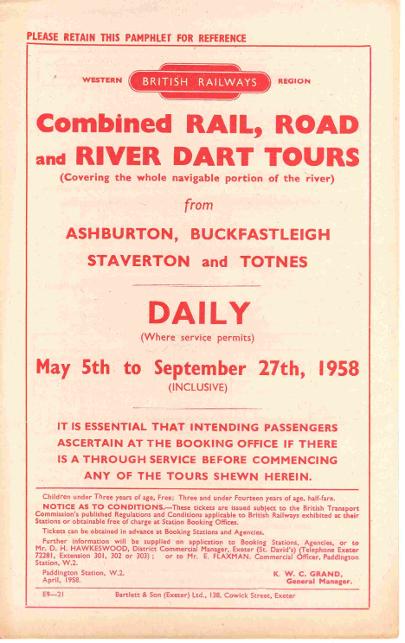 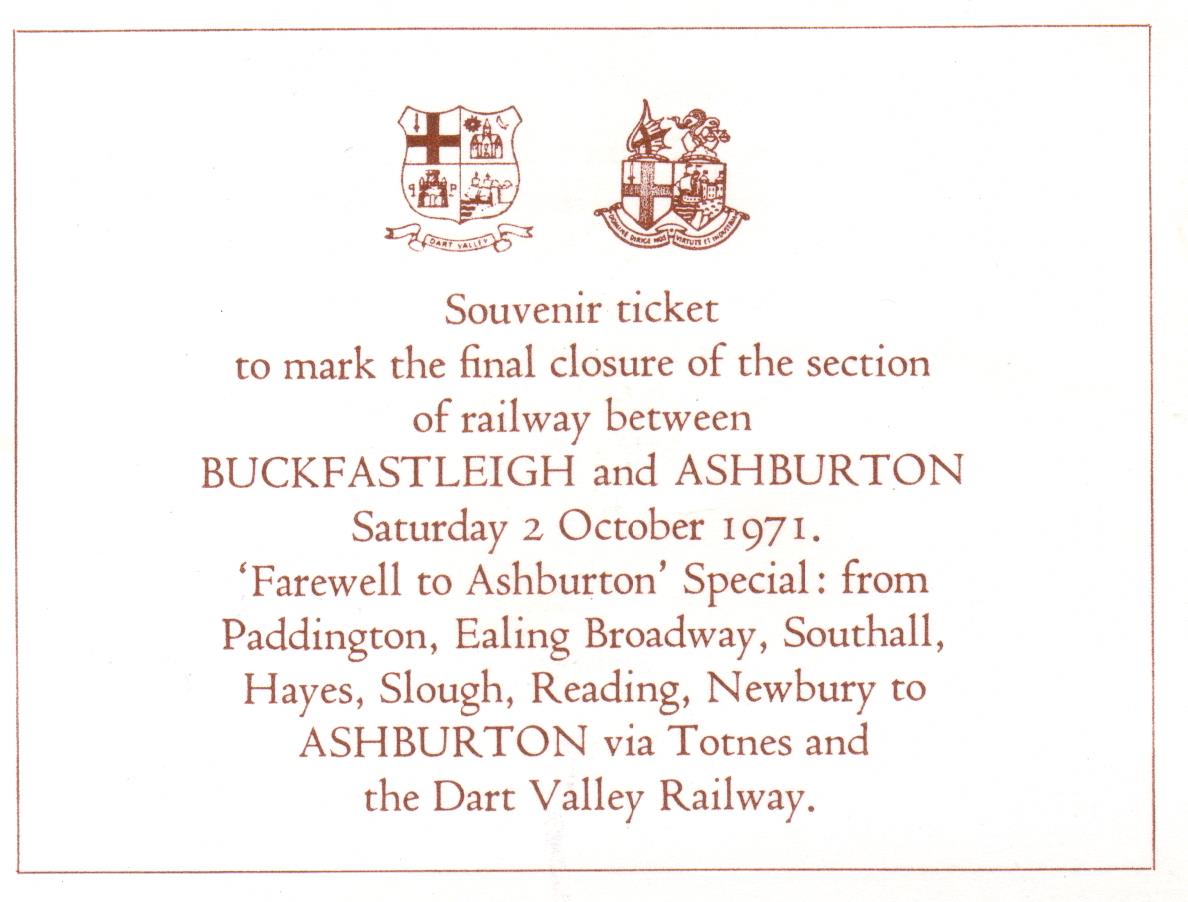 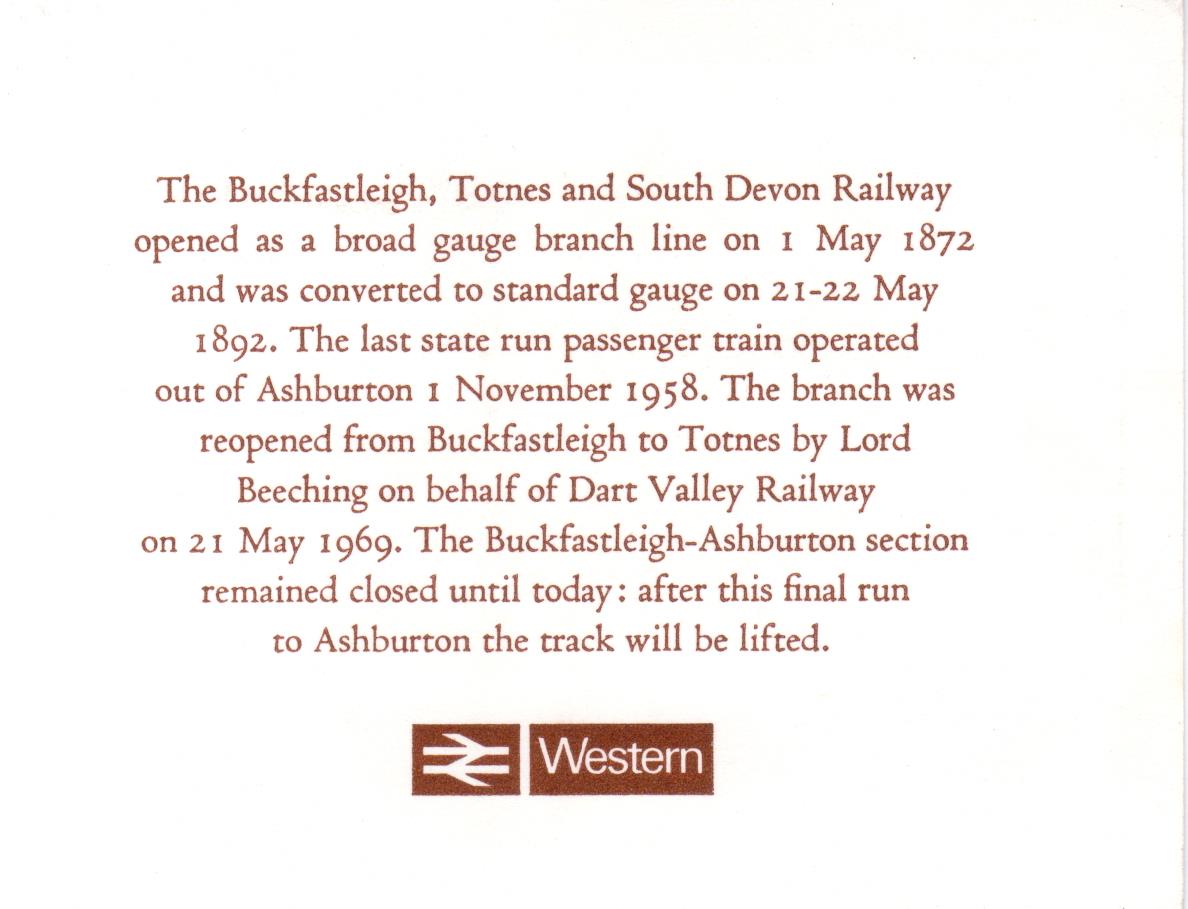 Above: Poster for combined rail and river tours, 1958 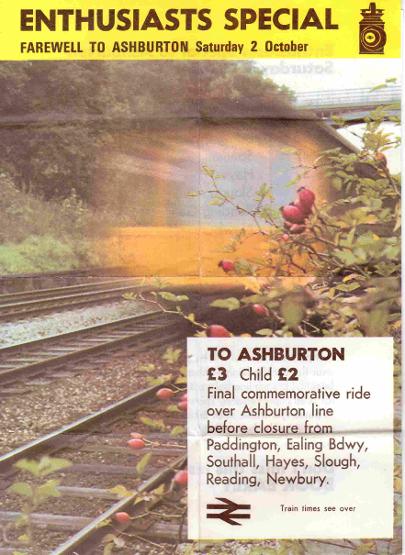 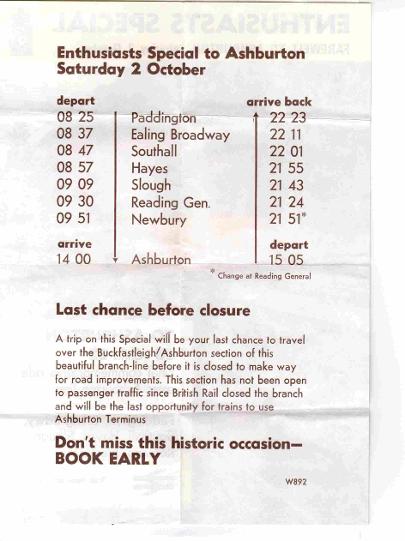 Above items are from my own collection 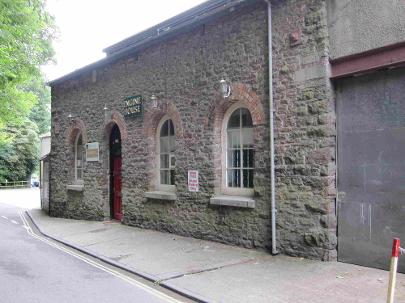 Left: The old engine house
My own photograph 2015

See http://www.cornwallrailwaysociety.org.uk/ashburton-branch---south-devon-railway.html for more pictures of Ashburton Station and the Ashburton/Totnes line.