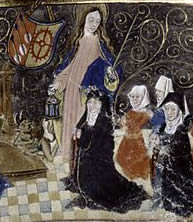 Above: St Gudula holding a lantern. Cropped image from a Gradual, 1494, Netherlands. New York Public Library, Manuscipts and Archives Division, MA092. In the public domain. A Gradual is a chant or hymn.
Our Lady's Well. 'In Ladwell orchard, near the ancient chapel of St Lawrence, now the Grammar School, and hard by the railway station, rises a copious spring of water which, until recently, formed a large pool. It is now covered and drained off underground. The overflow is still called Ladwell Brook, and unites with the Yeo or Ashburn stream, a short distance below the town. The spring in the orchard was formerly known as Our Lady's Well, now contracted into Ladwell. By the pool once stood a granite cross; the worked hexagonal base is now converted into a pump trough in a court in St Lawrence Lane. No tradition remains of any particular virtue attributed to the well, or of any superstitious observance connected with it.'
P F S A[mery], Report and Transactions of the Devonshire Association, vol 26, 1894, p82

The following comes from notes made by Mr. and Mrs Hatch circa 1990.

'No 14 St Lawrence Lane had a granite (?) cross in the back yard, thought likely to have come from Ladwell (Ladywell) Place off Whistley Hill. (There was a cobbled area near the well, the cross missing). Unfortunately the cross was broken up and used to fill a well at 14 St Lawrence Lane by a previous owner, Mr Alfonso Turner.'
Many thanks to Jeremy Hatch for the above document.

William Crossing believed that the hexagonal base in St Lawrence Lane came from St Gudula's well.
'In a courtyard in St. Lawrence Lane, a thoroughfare named after the old chantry, the tower of which still stands and now belongs to the Grammar School, may be seen the base of a cross, which has been hollowed out and converted into a trough. It is one foot high, and its shape is octagonal, each of the sides measuring about eighteen inches. There is a plinth, and a moulding round the top, but it is somewhat worn. It has been in its present situation for many years, and was brought, it is said, from Ladwell Orchard, which is not far off. It is however supposed that it originally stood by a little spring on the outskirts of the town, called Gulwell, and supported an old cross which we will now proceed to examine.'
William Crossing, The Ancient Crosses of Dartmoor and its Borderland, Revised edition, Exeter 1902, p106ff
See also, below
William Crossing, Devon and Cornwall Notes and Queries, 1903, London, p477

*******
Gulwell. At Gulwell, near Ashburton, the shaft of a cross forms a seat by the roadside, and the upper portion acts as the support for a cider vat. The bottom of the shaft is square, and 11in in diameter. Two feet from the bottom the shaft is octagonal; four of the sides measure 5in and the remainder 4in across; the total length is 5ft 3in. The measure of the upper portion is 25in to bottom of arms; the arms are 10in in diameter, and the total length 44in. Near this place there is a holy well, the water of which is considered good for diseases of the eye.
Report and Transactions of the Devonshire Association, vol 6, 1873-4, Plymouth, p398
'This spring rises by the roadside, a short distance from the west end of Ashburton, near some paint works, and gives its name to a small bridge over the Yeo. The water issues almost from the fence of a glebe field called Stone Park. All Ashburtonians know that its water is efficacious to wash weak eyes with, and is still frequently visited for that purpose. The name Gulwell is evidently a contraction of St Gudula's well, the patron saint of the blind*, and represented with a lantern. On the glebe land over this spring once stood a granite cross, long since removed, but portions of it can still be seen at Gulwell farm. The field Stone Park probably took its name from the stone cross. It may be noted that a public footpath connected Gulwell with Ladwell, passing through the churchyard.'
P F S A[mery], Report and Transactions of the Devonshire Association, vol 26, 1894, p82
* According to http://www.catholic.org and other sources, St Lucy is the patron saint of the blind. St Gudula is known for a divinely lit lantern (when the Devil blew out her candle to divert her from her path), so there is the idea of darkness being dispelled. 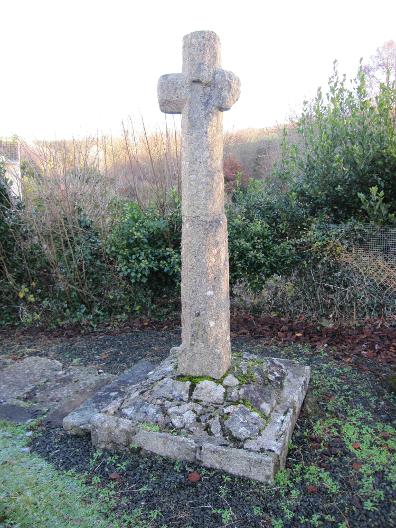 Above and below left: The cross and spring at St Gudula's well.
My own photographs circa 2013
According to P F S Amery in 1882*, Robert Prideaux, in the first half of the 16th century, stated that there was, in Ashburton, a Holy Well called 'Gulwell' after St Gudula, the ancient patroness of blind folk. ("Old Ashburton, Being the Recollections of Master Robert Prideaux, Attorney-at-Law 1509-1569")
A stone cross stood, in 1510, by the spring. It appears that the head of the Cross was taken away before Prideaux's time, but "the tall stone still remained, giving the name of Stone Park to the adjacent field, which was "the vicar's glebe field".
According to the article local belief was that the roadway which "now passes just above the well" used to dip down to it.
*Quoted by F C Tyler
F C Tyler, Devon and Cornwall Notes and Queries, vol 17, 1932-33, p357 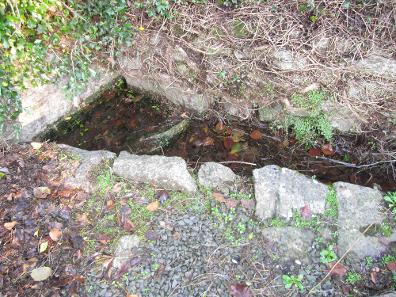 [On Gulwell spring] 'We shall not find the cross here, but at a farm a little further on, and which bears the same name as the well.
In the lane, and quite close to the wall of the garden in front of the farm house, is a small mounting-block, the top of which is formed by a portion of the object we have come to see. This consists of the shaft only, and if it really was brought from the spring, it must have been long ago, for I learnt in 1892 from the late Mr Perry, the owner of Gulwell, who was then eighty three years of age, that it was in its present situation in the
time of his grandfather. The piece of shaft is five feet three inches in length, and for a distance of two feet from the bottom is eleven inches square. Above this it is octagonal, the sides being alternately four and five inches across. The stone is much worn, and would seem, from tow holes that are drilled in it, to have been usesd at some time as a gate-post. The head and arms of this cross are in a building in the farm-court, and upon this portion a large cider vat is resting.'
William Crossing, Devon and Cornwall Notes and Queries, 1903, London, p478
F H Starkey points out that some people claim that the well is that of St Gulwall, a 6th century Celtic holy man.
Dartmoor Crosses, F H Starkey, Cornwall 1983, p114

In 1933 the cross from St Gudula's well was retrieved from where it had lain 'for several generations' and was re-erected by unemployed men. There were plans to restore the well if there were sufficient funds.
Western Times 10 March 1933 p13 col1

Background to Gulwell:
The Historical Gazetteer of England's Place Names gives the following references for Gulwell:
Goltawill in 1325 (Assize rolls)
and Goolewill in 1571 (Subsidy rolls)

When planning permission was sought in connection with land next to Pear Tree Cross the Dartmoor National Park made a report on the area. They noted that the medieval farm of Gulwell, with 15th century origins, had been situated there, and a number of medieval and later pottery finds had been recovered.
Dartmoor National Park 13 December 2013 http://www.dartmoor.gov.uk/__data/assets/pdf_file/0004/394951/20131206-DM-Reports-Part-1.pdf - Accessed 29-4-2016

1887 [Gulwell Farm] 'is still in existence behind the modern residence of the Perry family. It is a remarkably good example of a yeoman's house of the olden times, and portions of it date apparently from the fifteenth century. It is built partly of Devonshire 'cob' and the whole of the interior woodwork is of oak. There is a good Tudor window in one of the rooms, and several square-headed Late Perpendicular doorways still remain. Some of the woodwork bears traces of elaborate carving, and upon the interior of one of the partitions there are still signs of chromatic decoration of an unusual character, remains of six figures in all, and they appear to have been painted on leather, and fastened afterwards there to the panels on which they occur...I was able to make out the semblance of a man in armour holding a sword; another with red and gold crown, and a winged figure of Justice, with scales depending from the neck.'
Charles Worthy, Devonshire Parishes, vol1, London 1887, p73ff

Mentions of the Market Cross:

A marriage settlement in 1826 (between Monday and Bawden) concerns a house near the market cross.
Ref 924B/F/2/20, Devon Heritage Centre http://devon-cat.swheritage.org.uk/records/924B/F/2/20