Both John and Joseph became solicitors, one in Newton Abbot and one in Ashburton.
In 1790 John Gribble, son of Nelson Bevridge Gribble, became an articled clerk to William Loveys Woolcombe of Exeter.
Joseph Gribble, son of Nelson Beveridge Gribble, became an articled clerk to Robert Abraham the younger of Ashburton in 1791.
UK Articles of Clerkship 1756-1874, available via https://www.ancestry.co.uk

Joseph Gribble married Josepha Gribble Wynne by licence in June 1798. The marriage was held in St Anne, Soho, Westminster, the parish of the bride - Joseph was of Ashburton. A John Gribble was one of the witnesses.
Parish records

In 1845 Albert Gribble, an attorney of Cullompton, married Laura Field at Ashburton. His father was Jospeh Gribble, attorney.
Parish records

On the same page in the Ashburton register where Josepha's burial is recorded, is the record of Dorothy Gribble, of Newton Abbot and aged 62, buried in November 1821.
Parish records

Elizabeth Cutcliffe may have been the sister of George Cutcliffe, a surgeon of Ashburton. Two children of these names were baptised in Barnstaple in 1794 and 1786, the daughter and son of John and Mary.
https://www.familysearch.org
In April 1812 George Cutcliffe of the parish of Ashburton married Mary Sophia Spilsbury of the parish of Wolborough, Devon, by licence in Wolborough. John Gribble was one of the witnesses.
Parish records
Joseph Gibbelin Gribble was baptised in Wolborough in January 1828, the son of John Gribble, a solicitor, and his wife Elizabeth. The abode of the family was Newton Abbott.
John Gribble, aged 66 and from Newton Abbot, was buried in Manaton in 1837
Parish records

In 1838 a newspaper advertisement advised that all persons having a claim on the estate of John Gribble, late of Newton Abbot, a solicitor, should file their claim.
Western Times 18th August 1838, p1 col5

Meanwhile in 1851 widower Joseph Gribble, aged 76, was living in West Street. A coroner and solicitor, he was born in Bovey Tracey. With him on the census are three unmarried daughters and one unmarried son: Josepha W, Emma and Caroline, all governesses; and Arthur M, a dissenting minister.
1851 census HO107, piece no 1871, folio 314, p3

Joseph died in October of 1851, aged 77, and was buried in Manaton. His abode was Ashburton.
Parish records

The will of Joseph Gribble, gentleman of Ashburton, is available through the National Archives.
http://discovery.nationalarchives.gov.uk, 1853, PROB 11/2170/133

In 1871 the three sisters, together with another unmarried sister, Harriet, were still living in West St. Josepha was an annuitant, and the other three were 'Independent'.
1871 census RG10, piece no 2080, folio 59, p29

At least 6 of Joseph and Josepha's children lived into their 70s and 80s: Harriot, Emma, Honor, Josepha Wynne, Caroline and Arthur Maitland.
Thanks to the Ashburton Museum and also the Ashburton Memorial Project. This information will be displayed on Ashburton Archive at some time in the future. 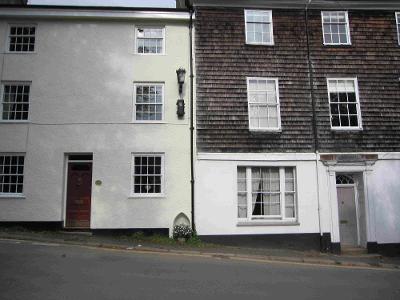 'The prisoners* here were under the charge of Mr Joseph Gribble, a local solicitor and county coroner, as the agent for war prisoners appointed by the War Office. Mr Gribble's house was opposite the entrance to the Vicarage, several members of his large family continued to reside here, the last only died in 1899, yet they appreared to have forgotten all about the prisoners.'
P F S Amery, Devon Notes and Queries, vol 2, part 1, Exeter 1903, p186
*French and American prisoners of war. See Conflict under Ashburton in Peril
Above: 46 (on the left) and 44/42 (?) West Street, opposite St Andrews House, West Street, formerly the Vicarage.
My own photograph 2017

In May 1862 Tucker and Son, solicitors, advertised for all persons having a claim on the estate of Elizabeth Gribble to come forward before June 21st. After that date the executors, Frederick Thomas Herron and John Tarr, were free to distribute the assets according to the will proved in the Exeter District Registry. Elizabeth Gribble was described as a widow, late of Ashburton; she had died on the 19th March.
Western Daily Mercury 27th May 1862, p1 col5

In September 1865 the death of Captain Joseph Gibbelin Gribble was announced. Aged 37, he was the third son of the late John Gribble, a Newton Abbot solicitor. Joseph was a commander in the P. and O. Company
Exeter and Plymouth Gazette, 22 September 1865, p5 col5