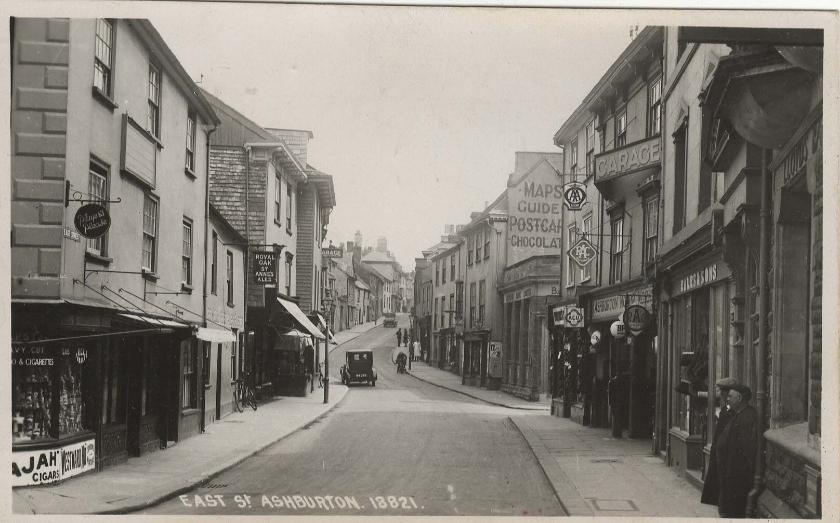 Above: Ashburton Motor Works in East Street.
Unknown date. From my own collection 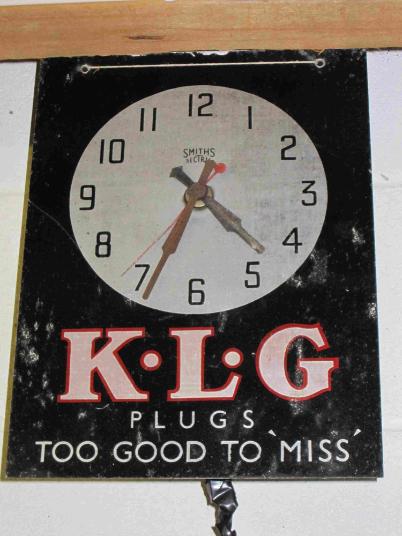 Left: Clock from Ashburton Motor Works.
With thanks to Roger Tilley
See the Virtual Museum 1910s for more objects from Ashburton Motor Works
An advertisement from the 1950s states that the business was established in 1916 Official Guide of Ashburton in the County of Devon, Ashburton Urban District Council, undated but between 1952 and 1960
E. O. Babington was probably born in Guernsey in the Channel Islands in 1884, but living in Pinhoe, Exeter, at the time of the 1911 census. His occupation was stated to be 'Motor industry.'
Right: Burrows' Guide of 1921 shows E O Babington as the proprietor of Ashburton Motor Works, with telephone no. 15.
Ernest O. Babington married Audrey H. Tanner in 1912, and Eileen M. Babington was born the following year. Better known as Moyra Babington, she later started the Studio Theatre in West St.
hhtp://www.freebmd.org.uk

See 'Days off - and nights in' for more on Moyra Babington. 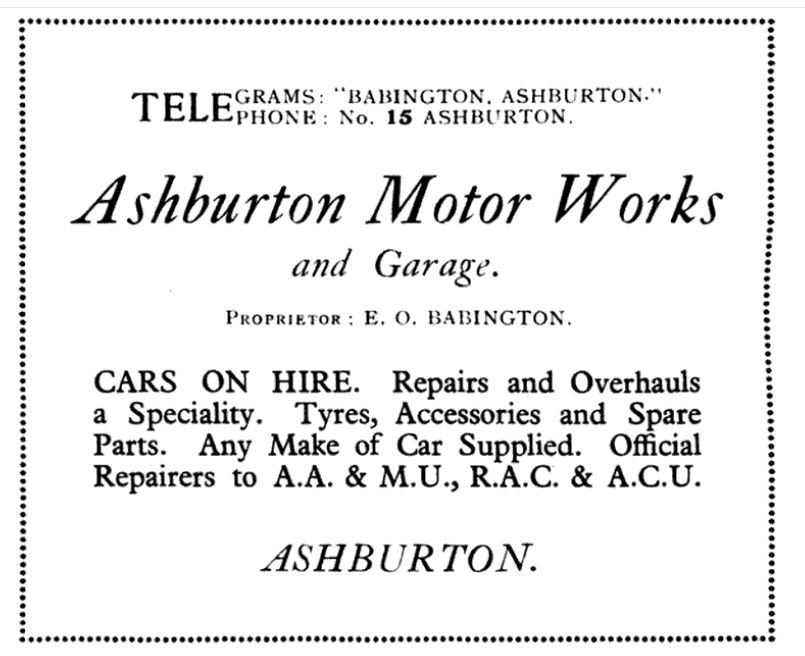 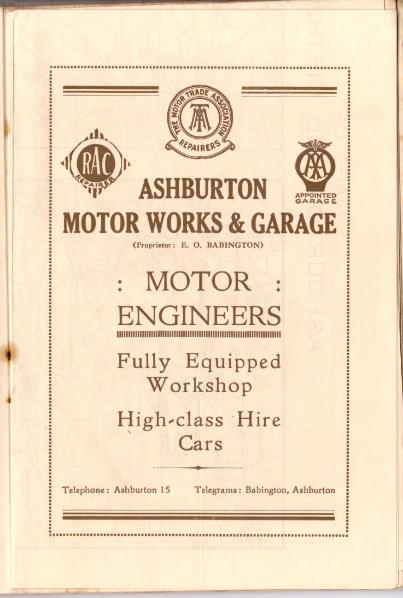 From Kelly's Directory of Devonshire 1935: Ernest O Babbington, forwarding agent to the Devon General Motor Omnibus Co Ltd, East St
Left: Advertisement for Ashburton Motor Works and Garage
From a booklet produced by Ashburton Urban District Council, undated but between 1930 and 1938
By the 1960s James (Jimmy) Sharpe owned the garage: Roger and Cathy Tilley bought the business from Jimmy in November 1969
Contribution from Roger Tilley, to whom many thanks.
The Central Garage 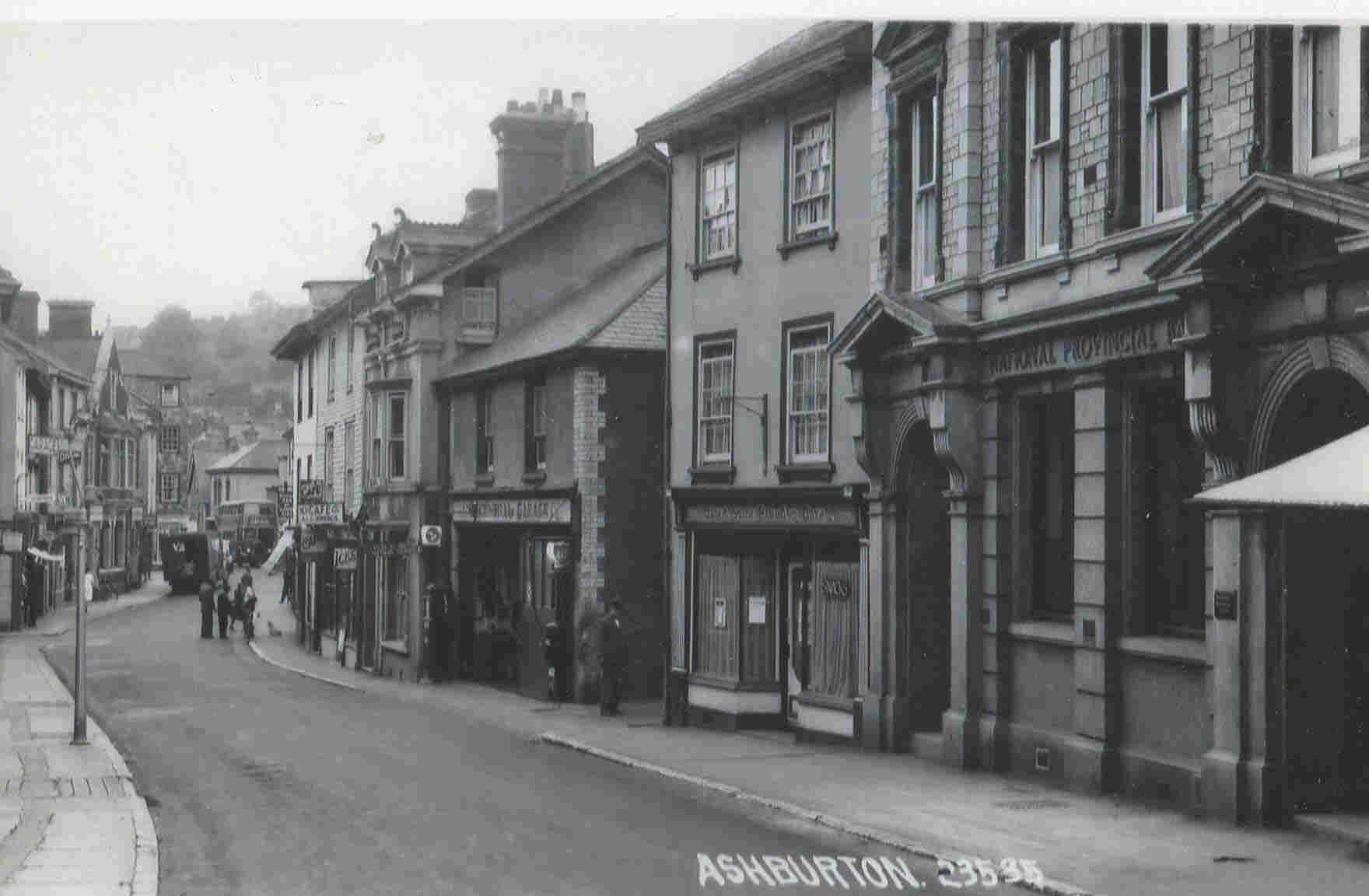 Above: Central Garage, East Street (middle of picture). 1950s?
From my own collection
Scappaticci Gayton was living with his wife Alice and children at 2 Great Bridge in 1911. A fish hawker aged 32, he had been born in Italy.
1911 census RG14, piece no 12726.
In 1921 Samuel Gayton had applied to the Home Secretary for naturalization. Anyone knowing why this should not be granted was asked to state their reasons in writing to the Under-Secretary of State.
Western Morning News 26 October 1921, p1 col6
A fire broke out at the Central Garage, East Street, in August 1925, and caused £200 to £300 worth of damage. The fire spread quickly, and Newton Abbot and Buckfastleigh fire brigades were sent for to assist Ashburton, who had only an old-fashioned manual pump. The fire started in the workrooms over the garage: cars were taken to safety, and volunteers moved a large number of full petrol cans from the premises. The proprietor, Mr S Gayton, lived next door to the garage, and furniture was removed from the house as a precaution. 'East Street temporarily resembled a furniture repository'.
The garage building was insured, but not the contents.
Western Morning News 3 August 1925, p3 col3
Samuel Gayton, a garage proprietor, was summoned in 1933 for using a public service vehicle without a licence. He had been granted a licence to run a vehicle on Saturdays, but the offence occurred on a Thursday. A witness who had travelled on the bus, which was running a trip in connection with Plymouth Navy Week, said he had been charged 4s but had not been issued with a ticket.
Arthur John Gayton, the defendant's son, pleaded on behalf of his father, who was fined 5s plus costs.
Exeter and Plymouth Gazette, 1 December 1933, p8 col5
Samuel Gayton, of 13 East Street, died in February 1936. Probate was granted to his widow, Alice Gertrude Gayton.
England and Wales Probate Death Index 1858-2019
Charles A Gayton lived at Dropping Wells at the time of the 1939 register. Born in 1901, he described himself as a motor coach and garage proprietor, and a marine store dealer.
1939 register, available from https://www.findmypast.co.uk
It is believed that at some time Mr Gayton moved his business to the outskirts of the town, on the A38 road.
Information from local resident
Two single decker buses were totally destroyed by fire in March 1948, in spite of the efforts made by 3 fire brigades. The buses were parked outside Gayton's garage: the cause of the fire was unknown.
Torbay Express and South Devon Echo 22 March 1948, p1 col2 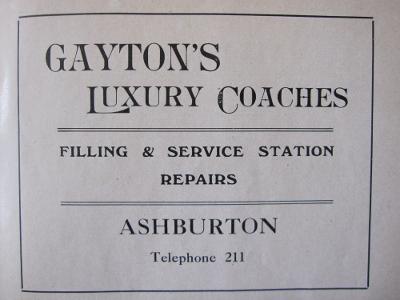 J W Owen, the Central Garage, Ashburton, had various cars for sale in July 1949.
Western Morning News 28 July 1949, p6 col4
Left: Advertisement for Gayton's Luxury Coaches.
From a booklet produced by Ashburton Urban District Council, undated but between 1952 and 1961
*******
In February 1933 two young men were charged with breaking into the Blue Linhay garage and stealing a quantity of cash and cigarettes. The proprietor of the garage, Maurice Alford, of East End Terrace, said that on January 16th he had set the alarm, which consisted of a 12 volt horn, fixed to the roof of the building. The horn sounded when a desk in the garage was opened, but the men had accessed the till without touching the upper part of the desk. The accused were committed for trial at the next Quarter Sessions.
Western Times 24 February 1933, p9 col7
*******
The Eastern Garage
Edward Pearson and Doris Matilda Pearson are on the 1931 electoral roll at Garage, Eastern Road. Their abode is Eastern House.
England and Wales Electoral Registers 1920-1932
Right: Advertisement for The Eastern Garage.
From a booklet produced by Ashburton Urban District Council, undated but between 1952 and 1961 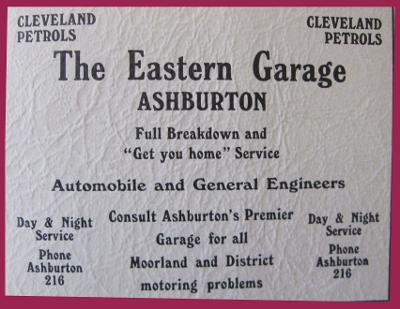 Arthur Oxborrow, who had committed offences since 1925, was sent to prison with hard labour in 1935. Mr Pearson of the Eastern Garage, Ashburton, had met Oxborrow in an Ashburton hotel, where the accused had introduced himself as a commander in the Royal Navy. He said he had driven some distance and was tired, and Mr Pearson agreed to drive him to various places. Mr Pearson also lent him 30s.
Opborrow wrote a cheque to Mr Pearson for £3, but he was overdrawn, and knew that his bank would not honour the cheque without a guarantor.
Oxborrow also paid for his stay in the Globe Hotel by cheque.
Exeter and Plymouth Gazette 10 May 1935, p8 col1
In 1935 Captain Charles Francis Gillanders, was summoned for driving a car in West Street whilst incapable of having full control. Two policemen had to jump out of the way of the vehicle, and when told to pull over drove on into North Street.
Edward Pearson, proprietor of Eastern Garage, appeared for the defence, confirming other witnesses' statements that his behaviour was normal and that he was sober.
Gillanders was fined £2 and was disqualified for 12 months.
Exeter and Plymouth Gazette, 30 August 1935, p8 col4
In 1939 Edward Pearson was at The Bungalow, Eastern Road. He was a motor engineer, garage proprietor and public contractor.
1939 register, available from https://www.findmypast.co.uk
*******
Garage proprietors in Kelly's Directory of Devon 1935:
Alford, Maurice, motor engineer. The Blue Linhay garage. TN 55
Ashburton Motor Works and Garage, Ernest O Babbington proprietor, East Street TN 15 and petrol filling station Peartree cross.
Edward Pearson, motor car hirer, East St.
*******
Garages appearing in the classified advertisements in the 1960s and 70s
Peter E Prowse, Great Bridge Garage
Torbay Express and South Devon Echo 9 March 1967, p12 col1
The A38 Garage. They were Triumph dealers, and had a full range of Pye car radios available.
Torbay Express and South Devon Echo 17 March 1967, p15 cols 5/6
Riley, Station Garage, Ashburton.
Torbay Express and South Devon Echo 12 December 1970, p2 col4