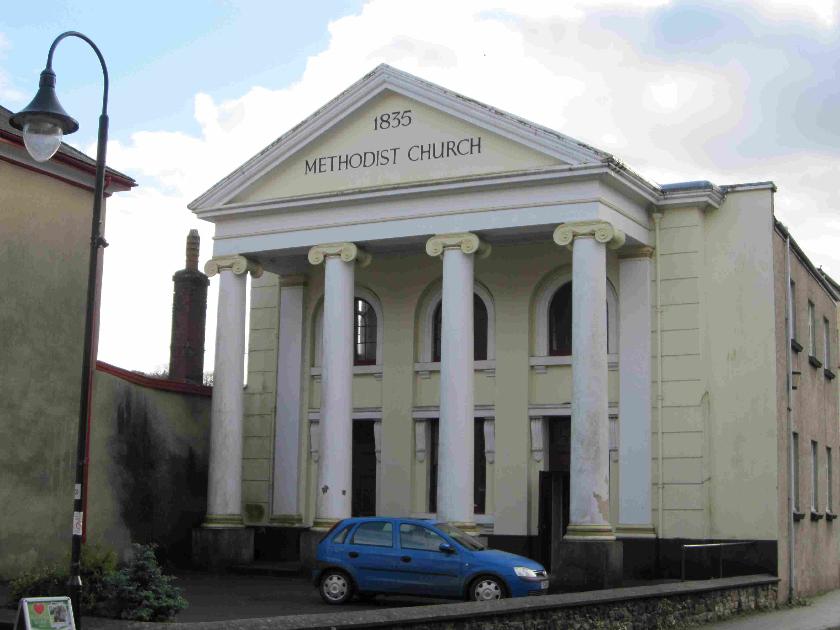 Above: The Wesleyan Chapel, West Street.
My own photograph 2012

The Wesleyan Chapel
From William Hill's 'Alphabetical Arrangement' of Methodist ministers:
William Trampleasure 1808-09
Francis Collier 1816-17
John Robinson 1816-17.
William Hill 1818-19
William Radford 1824-25
Thomas W Smith 1827
Joseph Earnshaw 1828-30
Elias Thomas 1831-32
The Wesleyan Methodist Itinerancy has a complete list of Ashburton ministers from 1802 to 1856
Rev Jospeh Hall, The Wesleyan Methodist Itinerancy, London, 1873 pp12,13
It can be viewed for free via Google books
The list begins with William Thoresby in 1802.
He had been admitted as a preacher (on trial) in 1786
Minutes of Some Late Conversations, 1786
https://wesleyscholar.com/wp-content/uploads/2019/02/Minutes-of-Several-Conversations-1786.pdf, p4
The Newfoundland Grand Banks website lists several baptisms performed by William Thoresby in the Carbonear district between 1796 and 1798.
http://ngb.chebucto.org/Vstats/pre-1891-car-meth-bap-1793-1818-car.shtml
'Mr Thoresby remained on the island two years. He was a man of excellent pulpit talent, and, wherever he preached, he had crowded congregations. He returned home in 1798'
Rev. William Wilson, Newfoundland and Its Missonaries, Cambridge, Mass., 1866, p179
St John's, Newfoundland. 'In May 1797, William Thoresby, who had charge of the Conception Bay missions for nearly two years, spent three sabbaths with [John Jones] and his church of sixty members...'
T Watson Smith, History of the Methodist Church within the Territories Embraced in the Late Conference of Eastern British America, including Nova Scotia, New Brunswick, Prince Edward Island, and Bermuda, vol II, p31
https://archive.org/stream/historymethodis02smituoft/historymethodis02smituoft_djvu.txt - Accessed 19-09-2019
In 1798 William Thorsby, a Minister of the Gospel, married Mary Bickford in Ashburton.
Parish records
The couple had at least three children, who were baptized In Ashburton by William between 1800 and 1803:
William Bickford Thoresby, born 1799
Mary, born 1801
Elizabeth, born 1803
The baptisms of William and Mary are also recorded in Redruth (Cornwall)*
England and Wales non-conformist births and baptisms, available via Findmypast.
*The transcription says Launceston
William Thoresby is listed as a Methodist minister in Redruth District in 1801
In Ashburton, Plymouth-Dock District in 1802 and 1803
In Plymouth-Dock District in 1804
In Ashburton, Plymouth-Dock District in 1806, as a supernumerary.
A note says that Brother Thoresby is to be considered as a proper Missionary, independent of the Superintendant of the Collumpton Circuit.
Thomas Cordeux, Minutes of the Methodist Conferences, vol 2, London, 1813, pp87, 127, 171, 225, 329
William Thorsby, Dissenting Minister, was buried at Ashburton in August 1806.
Parish records

His memorial in Ashburton churchyard reads:
'Sacred to the memory of William Thoresby, who departed this life 26th August 1806 aged 46. He laboured with great success for 20 years in connection with the Rev. John Wesley and many were turned to righteousness in England and Newfoundland...'
Memorial inscription

In his will proved in 1819 William Bickford bequeaths the money, goods, chattels and effects left in his care by the will of his late son-in-law William Thoresby to the use and benefit of William Thoresby's children. The income from his own property and effects was to go to his daughter, now married to Sampson Trehane, and after her decease to his grandchildren. Sampson Trehane was appointed one of the executors and trustees of William Bickford's will.
Ref PROB 11/1621/238 https://www.nationalarchives.gov.uk/
***
Joseph Sanders is shown as being at Ashburton in 1808-09 and 1821-23.
He wrote a tract, 'The Despisers of Revelation Affectionately Addressed', which was printed in Ashburton and according to Richard Carlile, 'Thrust into the faces of all those of my friends who are espousing the opinions I promulgate.' Carlile goes on to say 'Bull-baiting had been dropped before my time; but I have seen many a badger-baiting there*; and I would gladly come to have this Methodist Parson, Sanders, stuck up on one of the front stalls of the shambles, and I on the other, to expose his villainy in putting forth such a pamphlet.'
An Alphabetical Arrangement of all the Wesleyan-Methodist Preachers and Missionaries, William Hill, 3rd Edition London 1827
* ie at Ashburton
The Republican Vol 9, 1824, R. Carlile, 84 Fleet Street, p74

In 1821 John Jenkins hoped to be appointed as a Wesleyan Minister abroad, but instead was appointed to the Ashburton Circuit. It covered a large area, and he travelled on average about 300 miles a month, with most places in the circuit being visited about once a fortnight (see below for the towns the circuit covered). 'The people are kind,' although he also speaks of 'painful circumstances' in one unnamed place, because the people resented the removal of the previous preachers. On another occasion he clashed with the local parson, 'who can hunt, drink, shoot etc.', whilst attempting to preach in the centre of a town where revels were held and bulls baited. In the end he and his fellow preacher were hauled before the magistrates. He also relates tales of mortal danger in getting from place to place in adverse weather conditions. Unfortunately none of the locations are identified.

In 1834 and 1835 the numbers in the congregation swelled when there was discontent with political meddling by the incumbent of St. Andrew's. At that time it was a 'small building in one of the back streets'. A new chapel was built to accommodate them all in West Street - it cost £1500.
Western Times 5 May 1849 p5 col5

It seems likely that the 'small building in one of the back streets' was in Heavyhead Lane (now Woodland Road). F Lyde Caunter quotes "The Report of the Commissioners concerning Charities," published at Exeter in 1826:
"By indenture of feoffment, dated 2d January, 34th Elizabeth, Thomas Caunter, of Gulwill, in the parish of Staverton, granted and confirmed to Thomas Foule and five others of Ashburton, and their heirs, a tenement and garden, with the appurtenances, situate in the borough of Ashburton, in a lane called Heavyhead Lane, on trust, for the use, benefit, and behoof of the poor of the parish of Ashburton....
An almshouse, called the Eastern Almshouse, which was inhabited by poor widows stood about 30 years ago upon these premises, but the building fell down in consequence of the want of funds for its repair. It was in ruins in 1801, when a new trust deed, comprising this tenement, and the field called Bovey's Gift Meadow, was executed.
The site of this house was let in 1807, by the trustees, to William Bickford, for 99 years, determinable on three lives, at the rent of Two pounds per annum; and the lease contains a covenant  on the part of the lessee, to keep in repair all buildings as should be erected upon it, and to leave them in repair at the end of the term. A Methodist meeting house  has since been built on the site."
F Lyde  Caunter, Caunter Family Records, 1930, p69
Available through: https://archive.org/stream/caunterfamilyrec00caun/caunterfamilyrec00caun_djvu.txt - Accessed 27-12-2019

When William Horswell died in 1847 he was described as 'universally respected'. He had been the Wesleyan minister for some years.
Western Times 25 December 1847 p5 col1

John Eddy, the son of Henry Eddy, painter, was badly hurt in July 1856. He had been painting the windows of the Wesleyan Chapel when the ladder slipped off.
Western Times 12 July 1856 p7 col3

When the Rev Richard Moody died he was buried three miles away at Wolston Green, 'there being no Dissenters' burial ground in the town'
Western Times 17 January 1857 p6 col5

In 1869 the portico of the chapel needed partly rebuilding. Mr H Eddy prepared the plans, and the work was to be undertaken by Mr Hext.
Western Times 10 December 1869 p8 col3

In 1882 the Rev. W S Weatherill, Wesleyan Minister of Ashburton,  escaped injury when he and two companions were thrown from their pony and trap near the Terrace Steps in North Street
Western Times 23 June 1882, p7 col3

The Rev. G F N Sherwell was one of those conducting the service for the funeral of T S Clarke in November 1892.
The service for Mr Thomas Clarke was held in the chapel, before his burial in the churchyard. He had been superintendent of the Wesleyan School, on the school board, and an 'ardent worker' for Methodism.
Totnes Weekly Times 12 November 1892, p7 col3
Exeter and Plymouth Gazette 11 November 1892, p6 col7 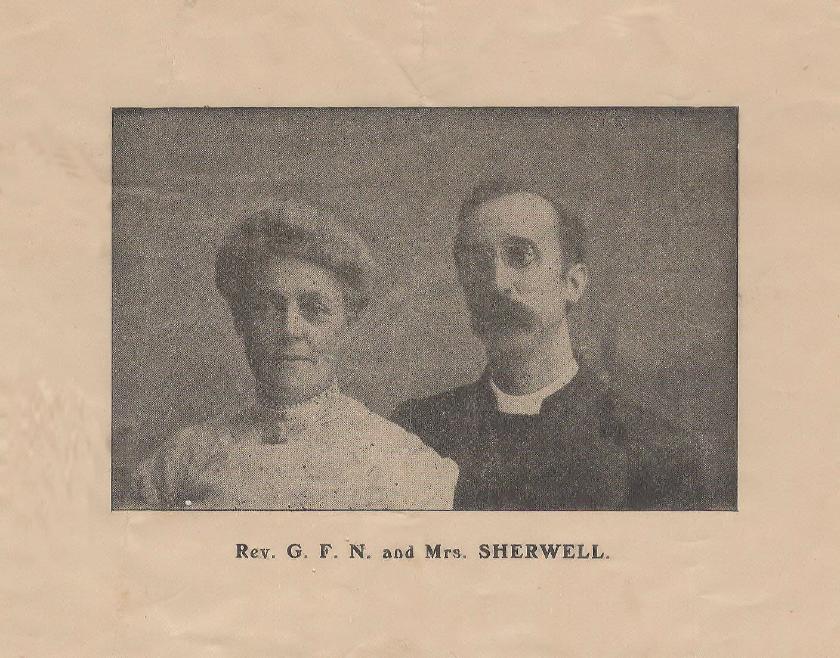 Above: The Rev G F N Sherwell and Mrs Sherwell.
Many thanks to Jane Batchelor for the above photo

George Frederick Neale Sherwell was born on December 27th 1859, and was baptised in January 1860 in West Bromwich, Staffordshire. He was the son of George W and Mary Ann Sherwell.
England and Wales Non-conformist births and baptisms, available through www.findmypast.co.uk

He was a Methodist minister living in Mickleton, Gloucestershire, in the 1891 census, and he married Harriet Ferriday* in the June quarter of that year.
1891 census RG12, piece no 2484, folio 43, p6
https://www.freebmd.org.uk
*See below for confirmation that this is the correct bride

The birth of George Ferriday Sherwell was registered in the Newton Abbot district in the June quarter of 1895. The mother's maiden name was Ferriday.
https://www.gro.gov.uk


Right: Memorials to Thomas S Clarke, who died in 1892, and his granddaughter Rita Eveline Webber, who died in 1985.
My own photograph 2015 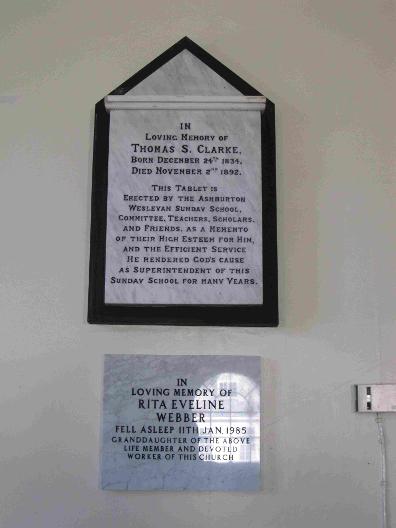 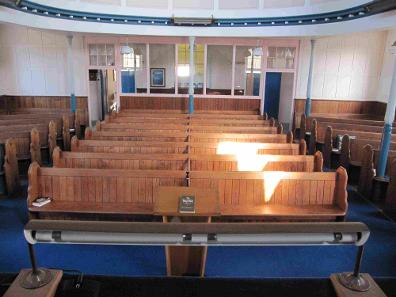 1896 saw the refurbishment of the Wesleyan Chapel. Open pews of pitch pine replaced box seats - each had an umbrella stand, and a frame to insert the occupants' names. A rostrum painted in green and chocolate took the place of the pulpit, and an alcove had an upholstered area for the preacher. The walls were decorated in green. Mr. Lear was the builder, and H. Boon the decorator. The plans had been prepared by S. Endacott. 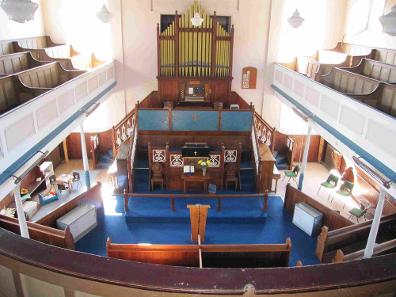 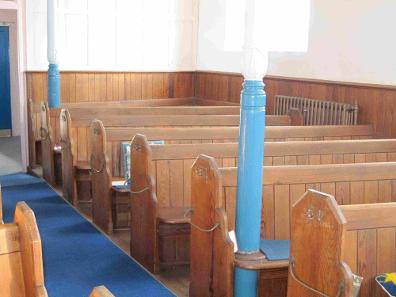 Above and below: The Methodist Chapel in 2015
My own photographs 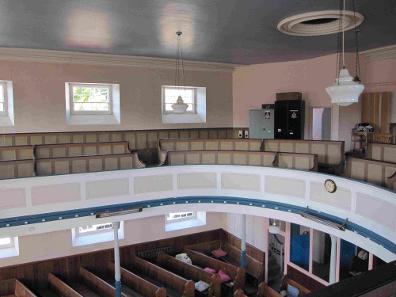 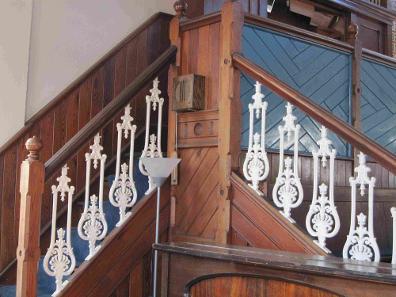 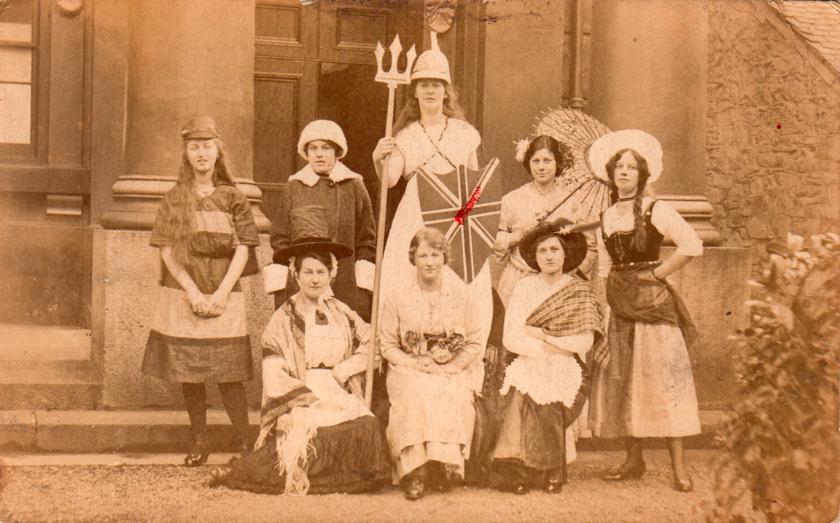 Above: Photograph taken in front of Ashburton Wesleyan Chapel c. 1914-15. Mabel (Merrett) Rodgman is in the back row second from left as Miss Canada.
Photographer Mrs A Hannaford, xxxxdenis Terrace, Ashburton (obliterated when pasted in a book).
Thanks to Nancy Frey for the above photograph
***
When Mrs Cubitt died aged 48 in 1932, the Western Times said that she would be 'missed acutely' by the Wesleyans. The daughter of Mr and Mrs A Sampson of Newton Abbot, she had been in business with her husband, Mr R Cubitt, for many years: the couple lived at Clinton House.
Western Times 1 April 1932, p12 col7
Mention of Rev H J Crocker, Methodist Pastor
Western Times 7 April 1933, p13 col1
1951 The Chapel Trustees are shown as the owner/occupiers of the Methodist Chapel, c/o the Rev. Bell, Sparnham, Ashburton.
In a list of buildings of special architectural or historic interest, compiled under Section 30 of the Town and Country Planning Act 1947 and dated 1951.
Thanks to Pete Webb