In the 1750s section of the Virtual museum are images of a book inscribed by members of the Sunter and Templer families (many thanks to Janet Brown for this).
The Sunter family appear in the parish registers in the mid 1600s when a Steeven or Stephani Sunter is the father of several children, and by the mid 1700s children of a John Sunter are being baptized: John (4th July 1734), William (31st August 1736), Joseph (5th June 1741 - he died in August), Joseph (27 October 1743) and Benjamin (23rd January 1746)
https://familysearch.org/

Assuming that we are talking about the same John, John Sunter snr., a wool-comber of Ashburton, received a sacrament certificate in 1721. This was to certify that he had taken Church of England Communion - something that anyone holding a position of trust had to do. 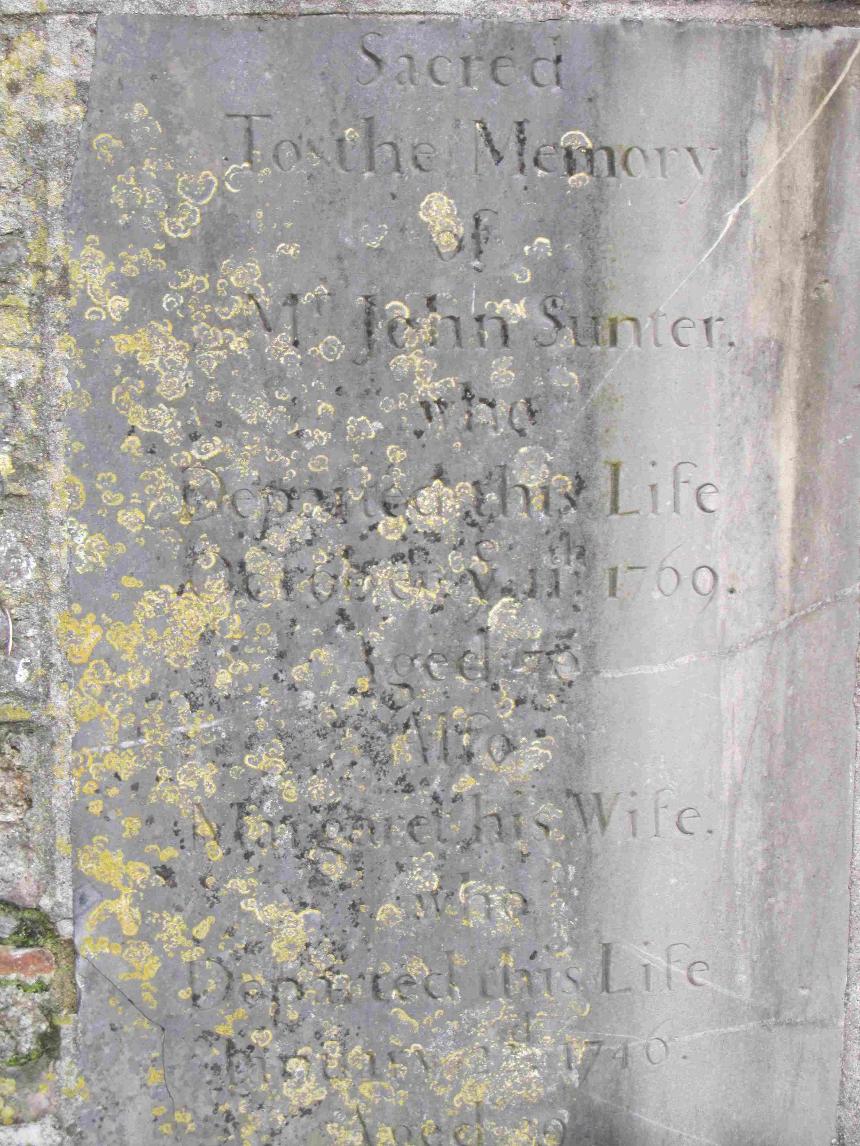 Above: 'Sacred to the memory of Mr John Sunter who departed this life October (?) ye 11th 1769 aged 70. Also Margaret his wife who departed this life January (?) 2nd 1746 aged 39.' Their son Benjamin was baptized at the end of January 1746.
Memorial on the back wall of St. Andrew's Church. My own photograph 2014
In September 1754 a Will Sunter is apprenticed to Saml Vicary of Crediton, Devon, clothier.
The register of duties paid for apprentices' indentures (1710 -1811)

Benjamin Sunter is possibly a witness at the marriage of Humphry Beals and Phillis Jones in Ashburton in 1761.
Tim Beals' website http://familytreemaker.genealogy.com/users/b/e/a/Tim-D-Beals/WEBSITE-0001/UHP-0271.html - Accessed 08-12-2014
He appears in the Freeholders lists (see above) in 1772.

Both William and Jospeh Sunter appear in the Ashburton section of the list of Devon Freeholders from 1770, when both are described as sergemakers. In 1774 both are clothiers.

1780, 'John Bickham of Ashburton, by will dated 3rd October 1780, gave to William Sunter, Joseph Sunter and Thomas Widdicombe, all his goods and chattels, on trust to sell the same, and after paying his debts to lay out the surplus in land....and the income arising from the said lands to be laid out in bread to be given to the poor not having weekly pay, in the church, weekly, on a prayer day.'
Report of the Commissioners concerning charities, T. Besley 1826, vols 1-2, p150

In 1795 a William Sunter, magistrate, writes a letter to Robert Mackreth, MP for Ashburton, concerned about providing food for the French prisoners on parole in the town.
Ref HO 42/34/160 http://discovery.nationalarchives.gov.uk - accessed 05-12-2014

An article in the Exeter and Plymouth Gazette in 1903 details the history of the Volunteer movement in Devon, formed as a response to the threatened invasion of Revolutionary France in 1794. According to the article, the armed association of Ashburton, formed in 1798, included William Sunter as First Lieutenant and Joseph Sunter as Ensign.
Exeter and Plymouth Gazette 15 Sept 1903 p3 col3

The will of William Sunter, gentleman, was proved in the Prerogative Court of Canterbury in 1813
PROB 11/1549/341 http://discovery.nationalarchives.gov.uk - accessed 05-12-2014
His brother Joseph is his sole executor, and he makes provision for his wife Mary, brother Joseph and 'dear niece Elizabeth (Jospeh's daughter) upon reaching the age of 25 or the day or her marriage. He also makes bequests to the Devon and Exeter Hospital and the Lunatic Asylum near Exeter. His 'good friends' Richard Collins of Exeter, merchant, and Henry Gervis of Ashburton, surgeon, are mentioned. He also owned land/premises in Callington, Cornwall.
Details of will from Janet Brown, to whom many thanks.

His wife, Mary, died in 1822. The memorial below reads: 'In memory of M(rs) Mary Sunter, relict of M William Sunter sergemaker of this town. She died 11th March 1822 in the 88 year of her age. Bright example of every Christian virtue'
My own photograph 2014 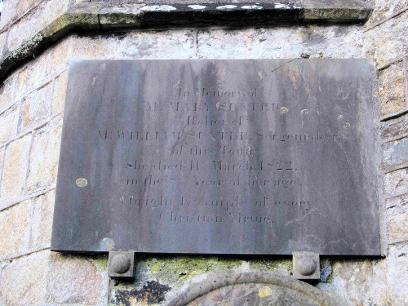 In 1827 property was being sold in St Lawrence's Lane. Lot 4, drying lofts and store houses, were 'lately in the possession of William Sunter', as was Lot 5, a walled garden which adjoined the previous two lots, which was in Broxy Lane.
Exeter Flying Post 11 January 1827 p4 col4
Joseph Sunter may have been apprenticed to John Charter, a saddler in Exeter, in August 1760.
The register of duties paid for apprentices' indentures (1710 -1811)

The parish register records that 'the wife of Mr. Joseph Sunter' was buried on December 28th 1775
Parish records

Joseph then appears to have two marriages, the first to Ch. Warden in March 1776.
Joseph's final marriage was to Elizabeth Soper on 24th May 1784.
https://familysearch.org/

On December 6th 1785 the register of duties paid for apprentices' indentures (1710 -1811) shows Edward Bovey   as an apprentice to Jos Sunter, Sergemaker, at Ashburton. 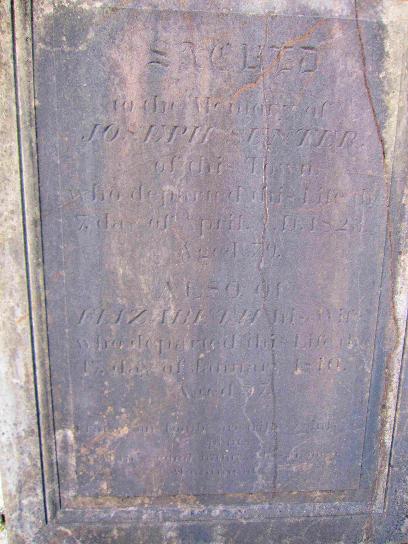 Above: 'Sacred to the memory of Joseph Sunter of this town who departed this life the 7 day of April 1823 aged 79. Also of Elizabeth his wife who departed this life the 17 day of January 1810 aged 57. Praises on tombs are vainly spent, man's good name the firmest monument.'
My own photograph 2014
The will of Joseph Sunter of Ashburton was proved in the Prerogative Court of Canterbury in 1823
PROB 11/1673/133 http://discovery.nationalarchives.gov.uk - accessed 05-12-2014
The bulk of his estate went to 'dear daughter Elizabeth'.
Will details from Janet Brown, to whom many thanks

In 1824 fourteen people were to be elected as trustees or commissioners of the Ashburton and Totnes Consolidated Turnpike. William and Joseph Sunter were two of the previous trustees.
Exeter Flying Post 11 March 1824 p1 col3

On the 1841 census John and Elizabeth, together with Charles and Reginald. are at Ambrook House, Ipplepen. John is described as Clerk, born outside the county.
http://www.freecen.org.uk/cgi/search.pl

In 1842 Ambrooke House is available to rent, It is 'now in the occupation of the Rev. John Templer.'
Exeter and Plymouth Gazette 23 April 1842 p2 col6

John Templer, widower aged 62, is still at Knowles House, Highweek in 1851 with three of his children: John S Templer, Emily A Templer and Reginald W. Templer.

Reginald William Templer, son of John and Elizabeth, was baptized in 1826.
Reginald William in turn had a son Reginald Gwynne Templer, born in Teignmouth in 1857. https://familysearch.org/
http://www.freebmd.org.uk

After the parliamentary elections of 1859 there were accusations of bribery and undue influence. Candidate Mr. Astell, who carried on 'a vigorous canvass' had agents including Mr. George Caunter and Mr. H. Tozer. Reginald Templer, a solicitor of Teignmouth was also involved, there to canvass tenants of his father, the Rev.Templer, who had property in Ashburton.
Western Times 30 July 1859 p2 col3

The 1881 census shows Reginald William with his wife and six children in Teignmouth - Reginald Gwynne is amongst them.
The Reginald G who has written in the book in the Virtual museum is presumably Reginald Gwynne Templer, the great grandson of Joseph Sunter.


For more on the Templer family, including a family tree and an image of Elizabeth's memorial, see Andrew Templer's website http://www.templerfamily.co.uk/html/family_tree.html - Accessed 12-12-2014