Above: Arcadian crested ware. From my own collection

If you want to research local or family history in Ashburton, here are some resources that I have found. Most are either for free or are at little cost, but I have added some useful commercial ones at the bottom of the page. The first section is for if you are visiting Ashburton in person - please bear in mind that many of these facilities are manned by volunteers, and may have restricted visiting hours. They may not be open at all in the winter. Please assume that they cannot deal with postal enquiries about your own research.

The second section has online resources.

See the sub-menu for the Ashburton bibliography

The Ashburton Information Centre http://www.ashburton.org/infocentre.htm has books and booklets about the area, and is staffed by knowledgeable volunteers. They have some information on memorials in the St Andrew's Churchyard

Ashburton Library. Link from http://www.devon.gov.uk/text/teignbridge_libraries has a small reference section with photocopies from local directories and other publications, and files of newspaper cuttings.

Ashburton Museum http://www.ashburton.org/museum.htm has a large number of local artefacts. Worth asking the volunteers if they have anything on the subject you are particularly interested in.

The St Lawrence Chapel http://www.stlawrencechapel.org.uk/ has a large collection of material connected with Ashburton Grammar School, and with the Portreeves of the town. There is  a model of the old railway station in The Stanley Gill Room.

The Ashburton entries from Pigot's Directory of 1822-23 can be found here:

1881 census via Find My Past http://www.findmypast.co.uk/

1881 census via The British Surnames website http://www.britishsurnames.co.uk/ Every surname in Ashburton recorded in the 1881 census

Names from Pigot's 1822-23 Directory can be found here http://www.genuki.org.uk/big/eng/DEV/Ashburton/AshburtonPigotPre1830

White's 1850 directory is also available for free as a Google eBook. https://www.google.co.uk

A search for 'Ashburton' in the National Archives 'Discovery' pages - http://discovery.nationalarchives.gov.uk/SearchUI brings up over a thousand results, which can be refined. Accessed 11-1-2014.

A search for 'Ashburton' in the catalogue of Devon Archives https://swheritage.org.uk/devon-archives/catalogues-and-indexes/ brings up over 2,900 results, which can be refined. Accessed 17-9-2018

Exeter Cathedral has an online catalogue to the holdings in its library and archive. A search for 'Ashburton' brings up four pages of results.

The Forebears website http://forebears.co.uk/england/devon/ashburton has links to many resources - some are paid sites, but many are free. Accessed 20-02-2015

http://www.gravestonephotos.com/index.php is an international grave monument directory. Go to England, then Devon, then to St Andrews Ashburton - there are details of 397 graves, and 708 names.

Names on the War Memorial

The Totnes Image Bank has some fabulous Ashburton photographs online. Their online images are only a fraction of those they have, so it may be worth contacting them if you have a specific enquiry.

Names from some directories

Transcriptions of some wills and legal documents

A history of the Foote family of Ashburton

List of signatories who promise to pay bounties to seamen in 1793 http://genuki.cs.ncl.ac.uk/DEV/Ashburton/AshburtonBounties.html - Accessed 17-12-2014

plus lots of pointers to other resources.

For information on the book trades connected to Ashburton, see the Exeter Working Papers in the book History at http://bookhistory.blogspot.co.uk/2014/03/devon-imprints-ashburton.html - Accessed 23-08-2015

A search by Database keyword "Ashburton" brings up:

The will of Joanna Adams (nee Glanville) of Ashburton, 1840 can be found on Jay Glanville's site http://www.glanvillenet.info/default.htm (go to Wills via Dead docs)

See also the website featuring the Glanvill/Glanville family in Ashburton and in Maker and Rame in Cornwall http://freepages.genealogy.rootsweb.ancestry.com/~glanville/index.html - Accessed 31-12-2012

Rick Desmier has a detailed website on the Earle family. It can be found at http://freepages.genealogy.rootsweb.ancestry.com/~desmier/earle_family.html - Accessed 5-11-2016

The Westaway one-name study has a page on the Ashburton Westaway family - plus mentions of the names Berry, Whiddon and Honeywill. Go to http://westawayfamily.co.uk/index.html then 'Biographies', 'Westaway Families' and finally 'The headstones in St Andrew, Ashburton church yard, by Nicola Aldridge'.

The Begent family home pages have a section on the Smerdon family in Ashburton http://www.begent.org/

http://www.familyhistorydata.co.uk/fhd_triggs.html has entries about the Triggs family in Ashburton. Accessed 23-01-2017

They also have baptisms from the Independent Chapel from 1817-1839

The Friends of Devon Archives have posted the Devon and Exeter Oath Rolls 1723 (sworn at the School House, Ashburton) at http://www.foda.org.uk - Accessed 16-1-2014

The following two sites are commercial ones:
https://www.ancestry.co.uk
https://www.findmypast.co.uk
Both are available at some libraries - and both occasionally have periods with free access to their records. It is worth being signed up to newsletters that will tell you when this happens - I personally receive emails from the Lost Cousins website http://www.lostcousins.com
Making purchases via the websites advertising on Old Ashburton earns me commission - which helps me maintain this resource. Thank you if you are one of those purchasers! 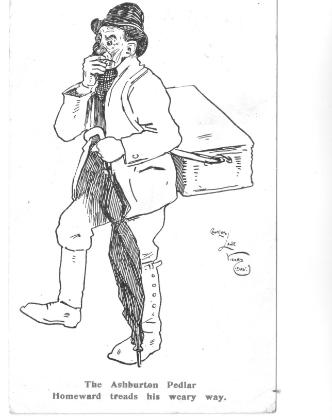