Cafés
Anchor Café
Herbert William Adams, a dairyman and grocer of the Anchor café, committed suicide by hanging in October 1925. The inquest returned a verdict of 'Suicide whilst temporarily insane'.
Western Morning News 13 October 1925, p2 col6
In 1933, after the death of Miss A A Lamason, Rendell and Sawdye were auctioning various properties in Ashburton. One of them was 14 East Street, otherwise known as Blue Anchor House, which was let to Mrs Adams on a yearly tenancy.
Western Morning News 19 August 1933, p4 col1
Beatrice M Adams was a proprietress, café, at 14 East Street in the 1939 register.
1939 register, available through www.findmypast.co.uk 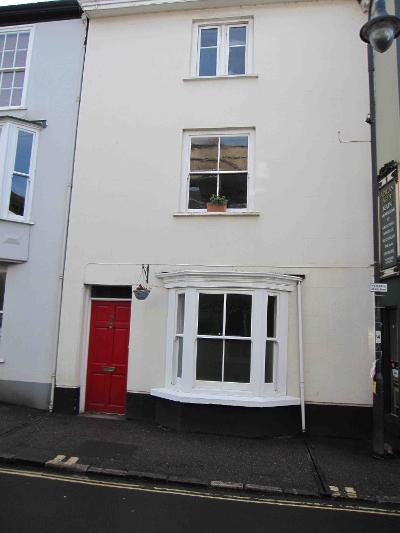 Barnes Café
Barnes Cafe and Tea Gardens was advertising in the Western Morning News in 1936. Established in 1870, it could accommodate 300, providing breakfasts, lunches and teas. Its telephone number was 30.
Western Morning News 17 June 1936, p3 col6
See Bakers under Banks and Businesses for more on the Barnes family
In 1939 Wilfred H W Gibbs was a 'Baker, Managing Director Café, Bakery' at 24 West Street.
Hilda W Fleetwood, [crossed out then 'Endacott'], was a Shop Assistant, Bread and Confectionery'
1939 register, available through www.findmypast.co.uk
The Card House Café
'The Devonshire builders very early found out that in exposed situations it was not only necessary to build thick walls, but to give these walls an external covering, or greatcoat. Slate being obtainable from several quarries in the county, they frequently covered the upper storeys of their houses with this material, and, conscious that it was not a very artistic-looking material, they did the best they could with it by cutting the slates into beautiful shapes. Ashburton is not at present, although it was formerly, a very picturesque town, but it has several of these cut-slate fronts; the different patterns of playing cards being represented on two or three of the houses.* These, indeed, seem the favourite patterns throughout the county, and point to a time when card-playing was far more general than it is now...'
James Hine FRIBA, A Plea for the Picturesque in Devonshire Towns, Report and Transactions of the Devonshire Association, vol 9, 1877, p162
*Of Plympton he says, 'Speaking of cards reminds me that in the same street with the Guildhall are some curious old slated fronts, in which the slates have been cut in the shapes of clubs, spades, hearts and diamonds.'
James Hine, Plympton in the Olden Time, reprinted from the Annual Report and Transactions of the Plymouth Institution and Devon and Cornwall Natural History Society, 1866-7, Plymouth 1867, p22
However Bridget Cherry and Nikolaus Pevsner say that Ashburton's is 'apparently unique'
Bridget Cherry and Nikolaus Pevsner,The Buildings of England: Devon, 1952, New Haven and London, revised 1989, p133 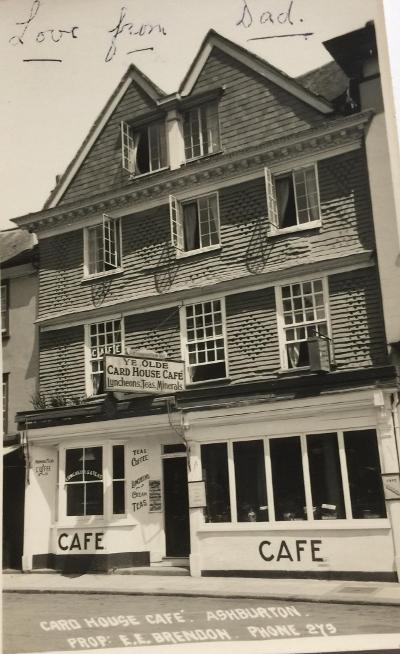 Ye Old Card House Café was under new management in 1929, with seating for 160. G Kirby was the proprietor. The telephone number was 73.
Western Morning News 17 May 1929, p1 col4
George Thomas Kirby, Card House Café, was on the electoral roll for 1931. His abode was 26 North Street.
Electoral registers 1920-32, available from www.findmypast.co.uk
The Card House Café was up for auction in May 1932.
Western Morning News 5 May 1932, p5 col4
'Café requisites' were being sold in March 1938
Western Morning News 22 March, p11 col6
Left: Ye Olde Card House Café. E E Brendon was the proprietor. By this time the telephone number was 273.
With many thanks to Jenny Gorton
Edith E Brendon was a café proprietress in the 1939 register. In the same property was her daughter, Amy E Kerslake, and Amy's husband, Alan J, a chemist.
1939 register, available through www.findmypast.co.uk
See Apothecaries and pharmacists, under Banks and Businesses, for more on the Kerslakes.
Exeter House Café
In 1931 a newspaper report on the death of the son of Mr J J Tape says that he is of Exeter House, Ashburton.
Western Morning News 8 December 1931, p3 col6
The 1939 register shows John J Tape, a master grocer, at 11 East Street.
1939 register, available through www.findmypast.co.uk
Right: According to the advertisement, the Exeter House Café was opposite the Midland Bank, making it in the vicinity of 9 or 11 East Street. 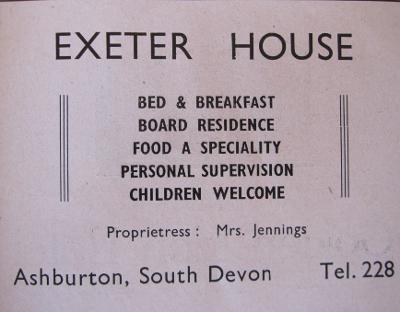 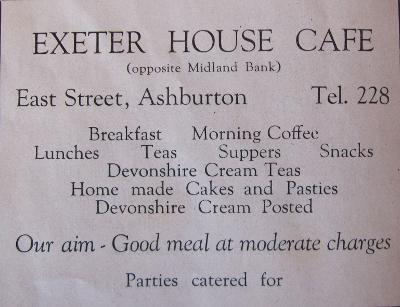 Left: The proprietress of Exeter House, which had the same telephone number, was Mrs Jennings.
Ashburton Urban District Council, Official Guide to Ashburton, undated but between 1952 and 1960 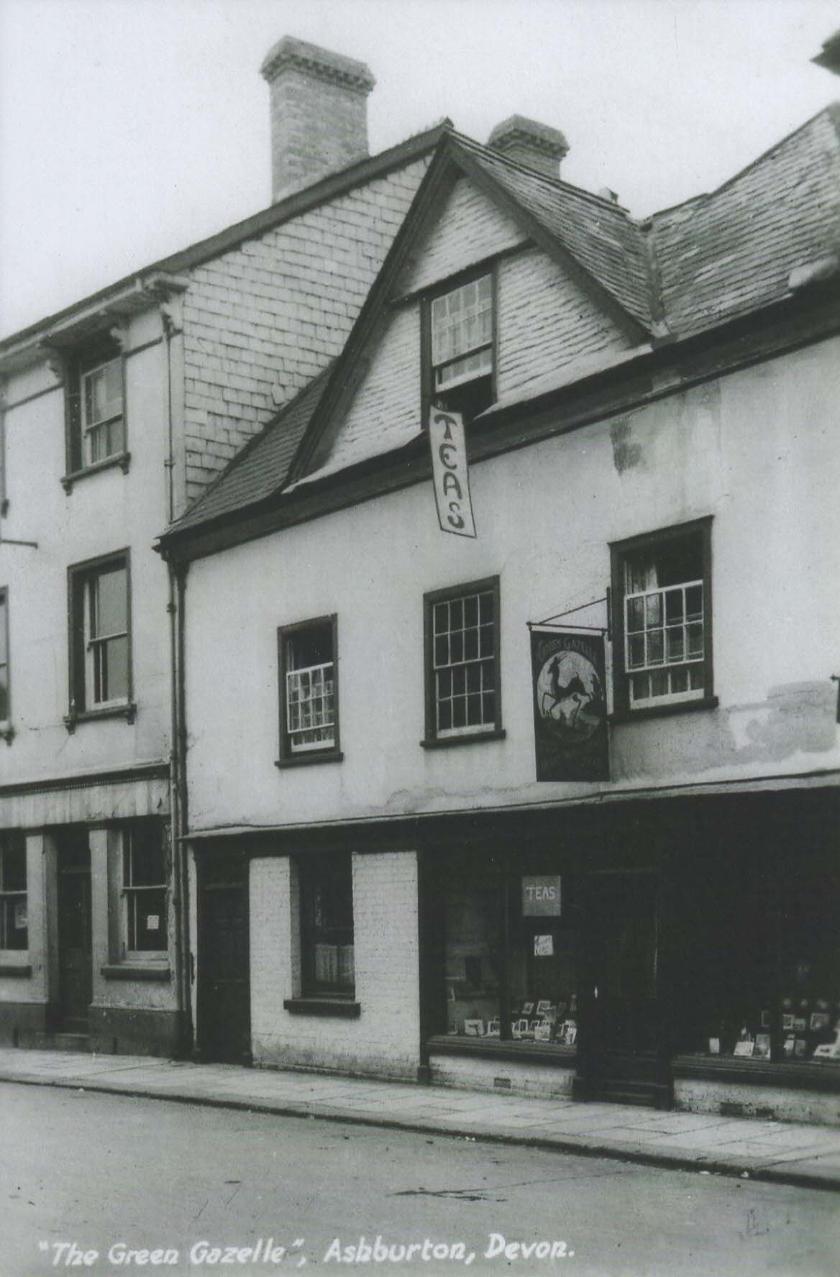 Above: The Green Gazelle Café, North Street.
From my own collection
Jack's Snack Bar
Right: An advertisement for Jack's Snack Bar at 17, East Street.
Ashburton Urban District Council, Official Guide to Ashburton, undated but between 1952 and 1960 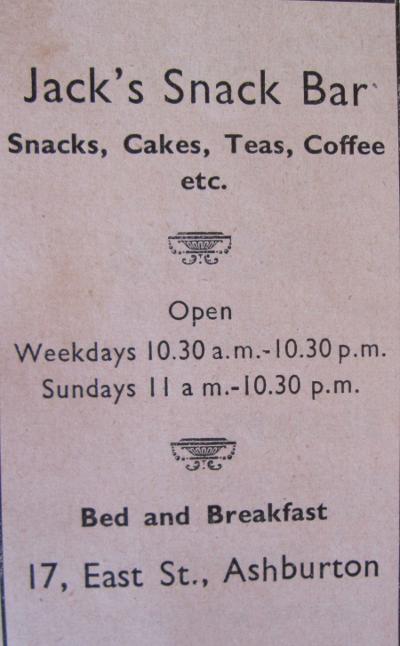 Pear Tree Cross Café
John L Truscott was a guest house and café proprietor in the 1939 register.
1939 register, available through www.findmypast.co.uk
Mr and Mrs G A Pearse owned the Pear Tree Cross Café when it was completely destroyed by fire in May 1948. A motorist raised the alarm after seeing fire in the thatched roof, but the Ashburton and Newton Abbot fire brigades were unable to save the building.
Exeter and Plymouth Gazette, 21 May 1948, p6 col2 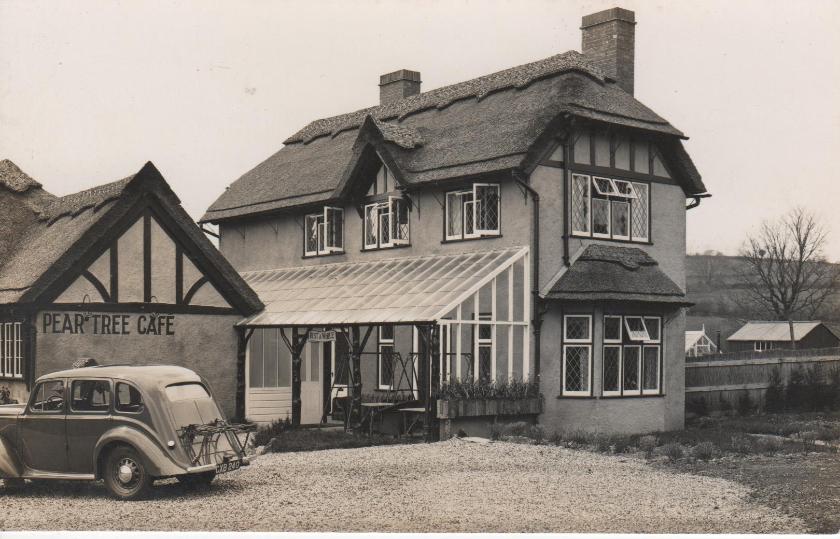 Above: Pear Tree Café
From my own collection
Ron's Café
In the 1911 census the Bonstow family were living in Hookhill, Paignton, with 63 year old John Bonstow, a widower, head of house: he was a farmer. Amongst family members living in the household was his son, also John, and daughter-in-law Hannah. A 2 year old grandson, Ronald Edmond John Bonstow, was also recorded.
Ronald was baptized in 1909 in Collaton St Mary, the son of John and Hannah.
1911 census RG14, piece number 12795
Collaton parish records
By 1917 John Bonstow was of Higher Mead - he gave evidence at an inquest in July of that year.
Western Times 11 July 1917, p3 col1 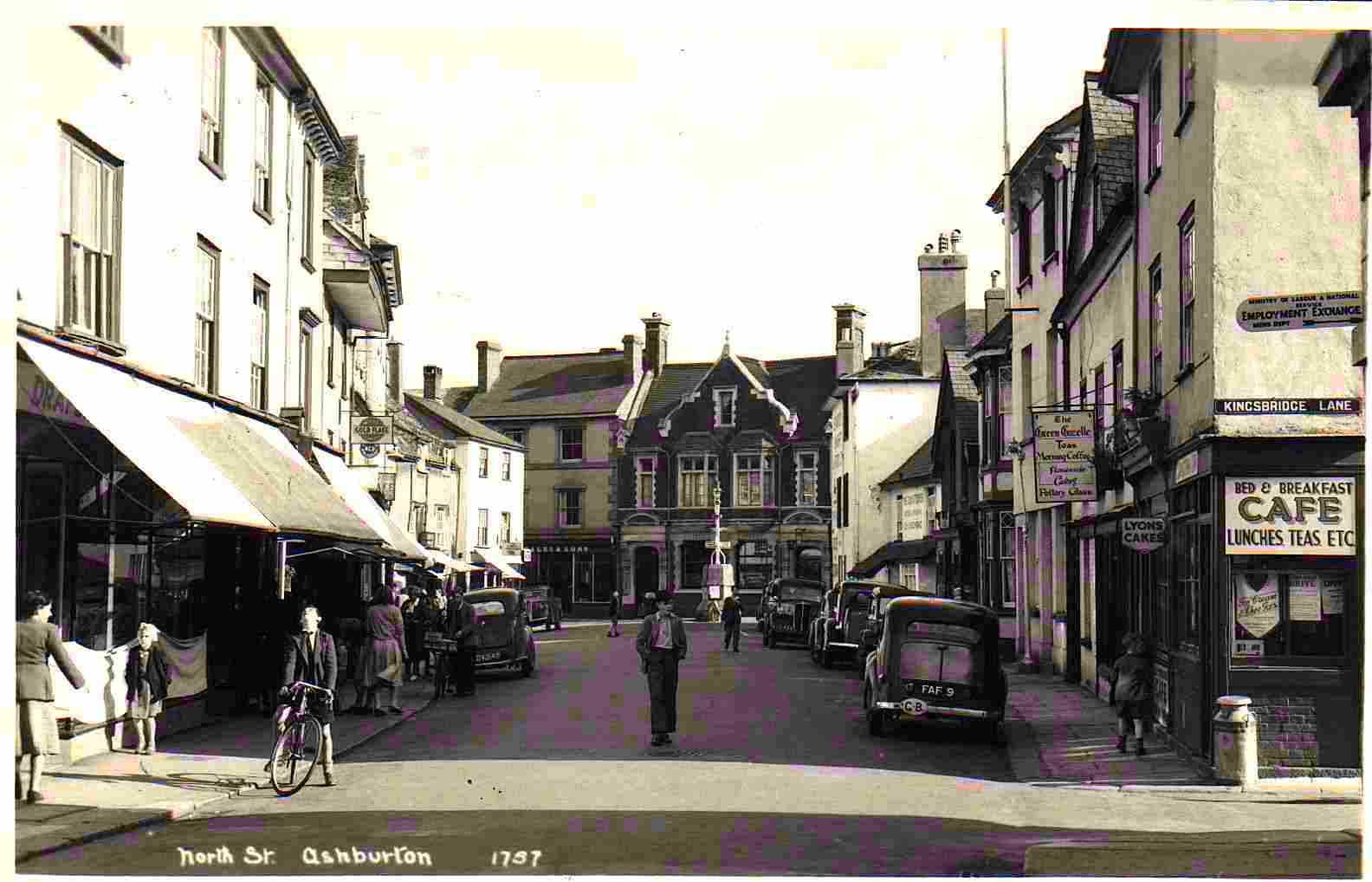 Above: Café belonging to the Bonstows, providing lunches, teas, and Bed and Breakfast. There is a milk churn on the corner. The cars suggest that this is 1940s.
From my own collection
John Bonstow [snr.], aged 76, died at The Dairy, Ashburton, in December 1923. The funeral was to be held at Stoke Gabriel church.
Western Morning News 27 December 1923, p1 col2
See Dairies under Banks and Businesses 2 for more on the Bonstows, and their link to No. 11 and then No. 13 North St.
In 1939 John Bonstow was a farmer and dairyman living at No. 11 North Street; Ronald, in the same household, was a dairy and farmer poultry keeper. John was the chief officer of the local fire brigade, and Ronald was a special constable.
Next door, at No. 13, James Hamlyn was a butcher and farmer.
1939 register
It is uncertain when the dairy became a café, although it is clearly one in the picture above. The Bonstow family continued to keep cows until at least the 1950s, and Ron Bonstow was running the café in the 1960s.
There were occasional mishaps with the cooking: 'King Alfred again!' Ron would cheerfully announce.
Memories of Ashburton resident plus my own memory.